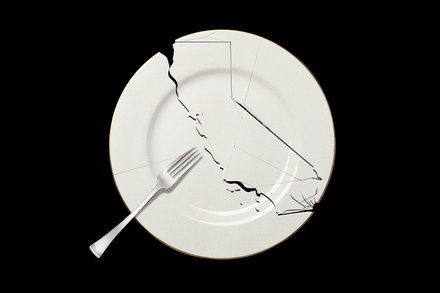 Silicon Valley has brought its wrecking ball to haute cuisine, and the results are not pretty.

A very cleverly written piece.
Not sure I buy Kinch’s opinion that the ultra luxury places are doing well, everyone else is struggling. Hard to believe that chefs and restauranteurs keep opening new places and working like crazy even though they can’t make money.

I am not really sure of the connection between Silicon Valley and the restaurant industry’s problems. Boom always create more restaurants as people have more money to eat out. It just happens that tech industry is big here.

Sure tech companies have cafeterias. But those who want to eat out after work will do so because they are tired of eating the same cafe food every day. Those who wants to eat the free food are not the customers of the ‘mid-range’. During lunch most tech companies aren’t right by restaurants so most workers just eat at cafeterias, during good and bad economies.

I am not really sure of the connection between Silicon Valley and the restaurant industry’s problems. Boom always create more restaurants as people have more money to eat out. It just happens that tech industry is big here.

Yeah, though they may exist, the article lacks facts do back up a causal connection between the tech boom and the current restaurant culture. An alternative explanation is that the demand created by the Michelin Guide, which launched its Bay Area edition in 2006, put more focus on the exhorbitant.

That’s sweet of the author to give himself a pat on the back for going to “blessedly middle class” Yummy Yummy. Apparently everyone in the Bay Area was eating at Chez Panisse until the tech-boom drove up their rents and we felt the “pop-cultural reach” of Jonathan Gold.

Ha, ha, ha. After seeing links and comments all day, you guys finally got me to read the piece, and I definitely regret it.
While I think that rising rents/wages/prices in general tilt the scales toward this ultra-high end, largely because of baseline prices places need to charge to make rent and payroll, which the author rightly references with, “Even nontrendy joints now ask $30 for a proper entree — a price point, according to Mr. Patterson, that encourages even affluent customers to discover the joys of home cooking.” I know that is a big part of my equation, and the food in these mid-range, and even low range (these days) doesn’t seem worth the ambience/dishwashing/time/expertise premium payed in a restaurant, though oddly, a higher premium for a more special experience can play out favorably in my mental math.
He references 2005 and 2009’s fig-gate as times when whines about strict adherence to Chez Panisse style seasonal produce treated a bit Puritanically were railed against. I don’t know how much this changed Bay Area food scenes, but I think good versions of local, seasonal ingredients being used “creatively” really proliferated across the country. Even if 80% of the creativity involved pork belly tacos, I think it marked a genuine embrace of this ethos, and not an Applebees version.
I have a tendency to think that this author, like many, over-estimates the percent of the crowd at these ultra-high end places for whom the expense isn’t thought of as extravagant. Much like my bias and amazement when I work at a coffee shop for part of a workday, astonished by the number of people able to just hang out with their laptop mid day, like they have all the free time and $5 latte money in the world, but I’m just there doing my full time job in a slightly different location for a bit.

Aside: I assume he ate the usual sea urchin parts you’d eat if you ordered uni, which are the gonads, and not “sea-urchin tongues”, though they may resemble mammal tongues superficially.

Someone mentioned to me that the Cantonese fare at Linkedin was pretty good. I had no idea that Andy Wai was running the kitchen…

According to that profile, he went from being Exec Chef at Harbor Village to being a line cook at a holiday inn. I’d say that sous chef at LinkedIn is better than line chef at a holiday inn.

I don’t really know what happened with the Holiday Inn gig. But it makes little sense that a chef of Chef Wai’s caliber is a line cook, unless there are unusual circumstances.

They can’t write a simple English sentence without inserting the imperial we.

They now have pretentions of becoming the national online critics of everything, since they have thoroughly alienated a large chunk of their subscriber base in the Tri State.

Shame on anyone in San Francisco or Silicon Valley who actually pays attention to them.

There is more good food in Napa, SF or even at the Asian market in San Jose than there is on Manhattan, which is increasingly dominated by theme park restaurants for tourists, including overpriced eponymous French derivatives for ultra rich tourists.

So much for their influence.

But what do you REALLY think ?

Here’s Andy Wai directing the breakfast service at one of the cafes. It was observed that he’d order his team to refill this, take away that, i.e. in general seemed pretty chilled. And he gets to eat everywhere at night and on weekends, no wonder chefs like him want to cook at tech companies. 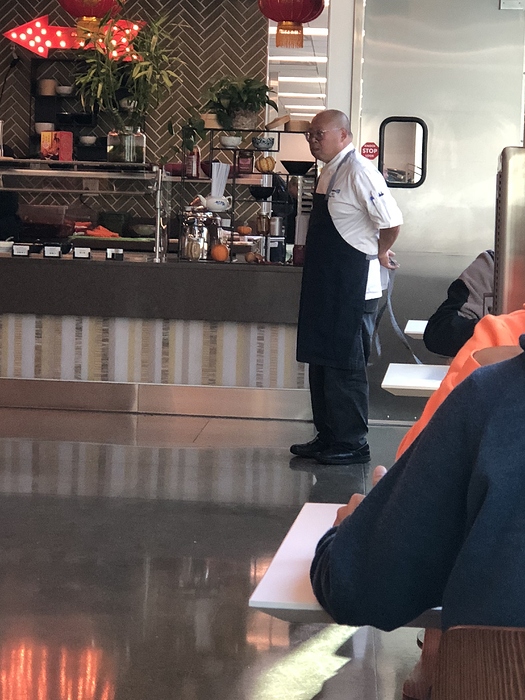