[NYC] Pete Wells: A Good Meal Is Hard to Find- at Least on UWS 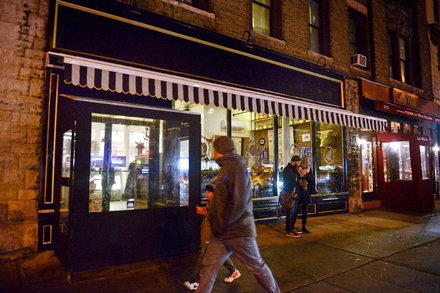 White Gold is the first Upper West Side eatery that’s gotten a starred review since the restaurant critic Pete Wells started at The Times.

‘In general, the meals I’ve had have fallen into the category that Gael Greene once described, if I remember correctly, as “neither good enough nor bad enough to write about.”’ 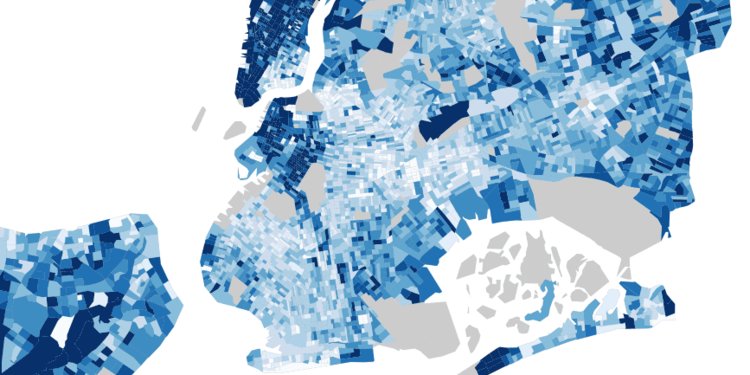 And then I was looking to see if race has anything to do with it:
http://statisticalatlas.com/neighborhood/New-York/New-York/Harlem/Race-and-Ethnicity#data-map/block
But then UES and West Village are even more uniform and just as rich.

I am stumped. Residential neighborhood doesn’t attract restaurants? Or flaws in Well’s observation to begin with?

ETA: I should point out the the income map above groups all median household income above into the $100k+ category, so I can’t say for sure whether income is a possible driver since UWS is pretty affluent by Manhattan standards.

They probably don’t eat dinner. Rich people don’t eat unless necessary, like social occasions, or not to die.

Then again, $100k in Manhattan is not very much, so maybe they don’t eat out so they can afford condo payments? Who knows?

Rich people don’t eat unless necessary, like social occasions, or not to die.

I think that’s just the WASP-y rich, who live mostly on the Upper East Side. Where there are plenty of notable restaurants.

I think the UWS kind of rich people are the kind of rich people who live in Park Slope. They cook at home (or pay someone to do it for them) and are willing to spend a lot of time and money on it. I lived in a collective house a little south of Park Slope for a few years in the late 80’s early 90’s and one of the most striking things about the neighborhood was the lack of decent restaurants - I don’t mean Michelin star places, I mean something beyond a diner. Two Boots was one of the few I can remember that I could take my visiting parents to - the Brooklyn restaurant they both really liked was the old Bouillabaisse on Atlantic Avenue.

The UWS has become more wealthy in the last 20 years or so, but it wasn’t always so. In the 80s and even 90s, housing was cheap and the area was home to a lot of “starving artist” types, presumably without a lot of money to spend on dining out. Still, 20 years is plenty of time for a restaurant scene to develop, and although there are still a lot of lower-income folks who have rent controlled places on the UWS, there is plenty of money on the UWS to support a better dining scene than what is there. I wonder if transportation isn’t a factor - getting to the UWS is a pain if you live on the east side, or in Queens or Brooklyn, or really anywhere other than the west side of Manhattan. If you already live on the west side of lower Manhattan, the restaurant scene there is already good, so why venture out?

I think it’s just as simple as the fact it isn’t especially accessible from the rest of the city.
The UES has more hotels and lots of museums that attract visitors and foot traffic through the east 80s, but UWS above lincoln center restaurants are more of the takeout or delivery variety, or casual spots to go with kids.

And people who work downtown and live on the UWS likely go out to dinner downtown since there are just so many more options-therefore the few options for going out aren’t necessarily supported.

UWS brunch is definitely A Thing- but that’s basically locals, not destination worthy spots to go to if one lives in chelsea or about anywhere on the east side (again back to transportation issue)

I think it’s just as simple as the fact it isn’t especially accessible from the rest of the city.

But of course it is. The 1,2 3, and the A, C, E - - no shortage of subway service. (In fact one of the old, I think extinct, NYC food coops was the UWS based Broadway Local - so named because all of its founders lived on the Seventh Avenue line). As with Park Slope, because the area was relatively cheap prior to the last twenty years or so, as biondanonima pointed out, people with some money could get very large spaces there - whole floors of seven to ten rooms on the UWS, entire brownstones in Park Slope. So yes, as Throckwood said, both were homes to poor bohemian types - like me and my friends in our brownstone collective. And both were convenient to subways and relatively safe - so both also became places where more kids and family homebody type moneyed people tended to settle. In a weird way the best example I could give you would be Hollywood royalty Mia Farrow with her 14 children on the UWS, and Hollywood royalty Woody Allen on the UES - with neither wanting to move into the others space, even when they were still madly in love with each other.

If we have a primarily residential neighborhood with relatively affluent families, then its not dissimilar to suburbs where to me, at the risk of overgeneralizing, where safe and non-remarkable, and most likely pricey, foods are served.

However, I’ve noticed that in the years since I last lived in the neighborhood (2011), the restaurants have significantly increased in diversity, while my mainstays have remained in business. When I have another reason to be somewhere near 104 St. and Broadway, I like to get the shawarma combo at Jerusalem Restaurant. The last time I got one a couple of months ago, it was possibly better than ever, and I think they serve some of the tastiest shawarma I’ve had in Manhattan.

I’ve had only one meal so far at Awadh, but it was great and was the best meal I had had at a non-vegetarian Indian restaurant perhaps since I visited London (in 2010 - and their Indian food outclasses what we can get here by a tremendous margin). That might be the closest to a destination restaurant for me in that neighborhood, but it does suffer from the New York Indian restaurant problems of serving overly rich food (too much oil and ghee) that upset my stomach, and also a bit too much salt (a very common problem in New York, generally). But at least nothing was oversweetened like everything but the papadams at my last (and I probably really mean last) meal at Malai Marke a few months ago.

I always liked Kefi when I was living up there, but I haven’t been there for at least a couple of years now.

There are also other places near the northern end of Columbus Avenue that are quite good. I’ve been to Freda’s fairly recently and love their coconut rice that accompanies the rest of the tasty food. The nearby Crepes on Columbus served quite a pleasant brunch when I joined a friend there some time last year.

I think any frustration about the Upper West Side now is overblown. It hasn’t been a restaurant desert for a while now. And there’s always the subway.