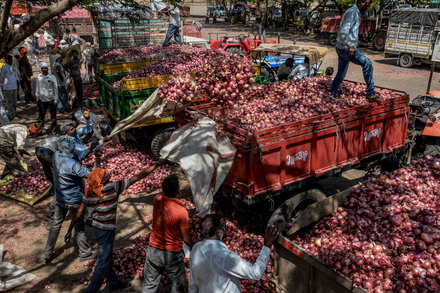 excerpts:
…
“Without onions, food is incomplete and colorless,” lamented Charu Singh, a researcher in New Delhi. “I’ve had to change my entire cooking style.”
…
Onions have been a huge export for India, at the top of the list of fresh fruits and vegetables that the nation sells abroad. According to government statistics, India exported nearly five billion pounds last fiscal year.

Quite aside from the culinary contribution, staples like onions, eggs, flour, and beans have historically been very inexpensive and therefore the center of food for those in poverty. Price escalation is really tough on those people.

The onion/staples pricing issue in India rears its head every few years. A key issue is middlemen and traders manipulating the price of staples, especially when there are already shortages in the new crop due to monsoon fluctuations, like this year. Farmers and consumers suffer, the middlemen make out like bandits. Banning exports for a period is an attempt to force the release of the hoarded stores and relieve some of the price manipulation.