Rao will be based in LA but will cover ALL of California. That’ll keep her busy, LOL! They asked for suggestions of restaurants she should visit, so I sent in my suggestions for the East and North Bays.

Here’s the official blurb on her from the NY TImes daily CA newsletter:
"…Tejal Rao has been appointed our first-ever California restaurant critic.

It is high time we did so, right? Not only does The Times have more readers in California than in any other state save New York, but California has more restaurants and a wider variety of them than any other state, bar none. That is an irresistible combination platter for a news organization like The Times.

We are devoted, after all, to the business of helping readers understand the world in which they live. Close and critical coverage of restaurants is a great way to do that in California, from south to north, east to west. The consideration of restaurants — there are 72,000 in the state! — will allow Tejal to explore how Californians live and what matters to them, across cultures and cuisines and into their (delicious!) commingling. She’ll tell us where to eat and why.

And she is the perfect person for the role. A reporter on our Food Desk and an “Eat” columnist for The New York Times Magazine for the past two years, Tejal has reported on food trucks in New York and the Lost Kitchen in Maine, on the indigenous cuisine of the upper Midwest and on the return to Thailand of the chef Pim Techamuanvivit. She has written columns about oysters, mango kulfi and the case for canned tuna. She’s gone deep on panettone. Her interests are wide and varied. Moreover, she has been a restaurant critic before, at both Bloomberg News and The Village Voice in New York. In both postings she was awarded a James Beard Award for restaurant criticism. "

Sam Sifton’s full announcement is on his Facebook page: https://www.nytco.com/tejal-rao-named…

I’ll be interested to read her reviews. I had the faint but persistent hope we could lure Pete Wells out here, the way we have other ex-NYers! But he’s staying in NYC…oh, well.
Sorry, can the moderators add an x-post to the LA board for this? I can’t see how to do it ‘after the fact’ - Thx!

There are some posts on this in the “Food and Media News” board which are linked, below:

Eater.com: What the New York Times California Critic Means For West Coast Dining - The paper’s appointment of critic Tejal Rao should be a wake-up call for the state’s food media by Meghan McCarron Aug 10, 2018, 7:55pm EDT Food Media and News

excerpt: The LA Weekly’s new ownership decimated the paper’s staff, including Shalhoup and food editor Katherine Spiers. The Weekly’s open critic position, which was recently vacated by Besha Rodell, has been eliminated. Los Angeles Magazine has also seen its food section shrink, and since the departure of Patrick Kuh it has ceased to run restaurant reviews. With the recent death of Jonathan Gold, a critic whose work not only highlighted the city’s food but also helped define the vision of L…

The fact that she will be based in LA indicates that the NYT still doesn’t get it.

The fact that she will be based in LA indicates that the NYT still doesn’t get it.

In reality they probably just count subscribers from Norcal and Socal, see who has more, and send Rao there.

I agree - plus, the LA food scene is very lively. There’s a lot of ‘sheeple-ism’ in NorCA menus.

There’s sheeple-ism in the menus of those Michelin type restaurants. Outside of that I’d argue there’s pretty good variety.

With that said, I don’t know how Tejal Rao is going to review the eateries in SFBA’s immigrant enclaves if she doesn’t live here and doesn’t have an on-the-ground understanding.

Too bad Chronicle didn’t get her.

Did they count MIchelin stars? Or even MIchelin Guides?

Sounds like a marketing stunt to grab Gold’s readership, not that it’s a bad thing, I’m ecstatic to see a minority woman take on a high-profile position.

I have mixed feelings about her quality as a food commentator. Her article on mago kulfi suggested using canned condensed milk, instead of reducing your own. As somebody who has done kulfi both ways, I can testify that the condensed milk route produces, gluey, sticky, vastly inferior results. An early article of hers for the Times on a prune tart was lifted without attribution (at the time – have to cover myself against her quietly slipping in a reference) almost directly from an earlier article from an obscure publication – the New York Times. (I guess she gets points for chutzpah.) See the recipe associated with: 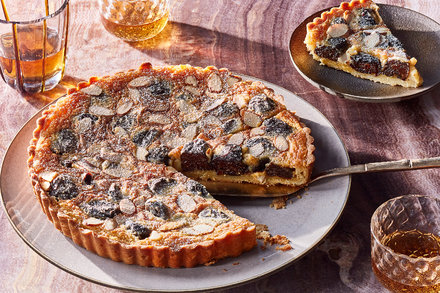 In Praise of the Prune

A frangipane tart that showcases the pleasures of the dried fruit.

Honestly I haven’t heard of her till now.

I was not commenting on your comment, just on TR in general, although I agreed with your sentiment that it’s great to have somebody like her in a big job. Just wish it were somebody better.

Bauer’s readership isn’t chopped liver. And probably easier to please, since anybody would seem better, at least in the short run.

Gary, your honesty is always appreciated.

Yeah… I had that reaction to the kulfi too, but it’s a very popular shortcut for many indian desserts, even in India. And ahe’s not catering to the specific palate, rather to the broader readership. I have the same reaction to many of Raghavan Iyer and Meera Sodha’s recipes.

I’m interested to see how TR approaches the breadth of cuisines combined with the geographical scope. I’m sure she’ll have local help and a lot of support - or I hope so, otherwise it’s a set-up…

Yes, Indian food is on the decline – in India, as well – and many people use shortcuts. Still, I expect an article in the NYT to at least mention that the reader is getting an inferior substitute, not a passable one, for the original.

This is a tangent, but that’s a pretty drastic condemnation of the cuisine

With that said, I don’t know how Tejal Rao is going to review the eateries in SFBA’s immigrant enclaves if she doesn’t live here and doesn’t have an on-the-ground understanding.

Too bad Chronicle didn’t get her.

Not being at the Chronicle, which targets SF readers and has their office there, might be a benefit to South Bay coverage. That’s assuming she stays at hotels in the South Bay for extended periods.

I think its pretty hard to get any obscure finds in the South Bay unless one is willing to go JGold style and go eat at every Indian, Korean, Chinese restaurant. Or she can just do the mainstream and go to a place like Protege.

I don’t know how New York Times’ readership is distributed between SF, versus South Bay, but I’d imagine having presumably sizeable subscriptions from Silicon Valley would mean she’ll eventually have to show up.

Since a major part of the paper’s market will by NYC based travellers, why would they want to focus on the South Bay?

I mean, “Where the hell is Milpitas?”