We just tried one of these and they are AMAZING. And seriously big: 6" long and weighing 1.5 lbs on average. We’ve been disappointed in almost all the mangoes this year, except this variety.

Season started 2-3 weeks ago; I don’t know how much longer they’ll be around. We got ours from specialty grocer Good Eggs delivery, but you can try the higher-end produce places around the SFBA. If you find one, give it a try.

"California-grown Keitt Mangos are here for their short 4-6 week season! This super sweet variety has been grown in Coachella Valley in Riverside County for the past few decades, but only recently has organic production taken off to the point where they’ve been grown commercially and sold outside of farmers’ markets in Southern California.

The skin of the Keitt remains green when ripe, but should begin to give slightly to gentle pressure. It has a honey-like sweetness, with none of those annoying strings attached to the pit of other varieties. Unlike almost all imported mangoes (besides a few growing in one small region of Mexico), CA-grown mangoes are untreated, meaning that they haven’t been put into a hot water bath (generally 115°F for 75-110 minutes, which some studies suggest can have negative effects on fruit flavor and aroma)." 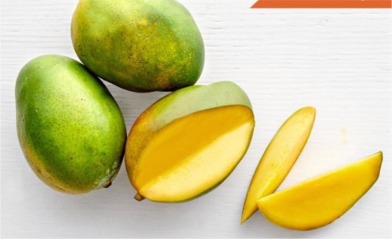 This may explain the giant mango I received from Misfits Market. The sticker just said organic. It arrived almost totally green, taking 10 days to turn rust yellow in a <2" radius around the stem. But it was tender all over by then, so I thought I’d better butcher it. The flesh was nonstringy, and as delicious as an Ataulfo mango. Fingers crossed they have more of them!

If anyone finds these at the stores, please share!

Ooh! Looks like it worked. Today’s box contains one that’s only the size of a medium avocado, but better than nuthin’!

I saw them at the Haight Street Whole Foods tonight, which is the smallest of Whole Foods so I assume they would all carry them.

I bought one too! $3.99 at Nugget. How much are they going for elsewhere?

at B Bowl, $1.59 for Calif Keitt mangoes (not organic). About 1pounds size. . Mexican Keitts are also good, in various sizes and prices.

Spotted the organic variety for $2.99 at Whole Foods in Berkeley

I recently got two of these, I am pretty sure at Berkeley bowl but could have been Monterey market. 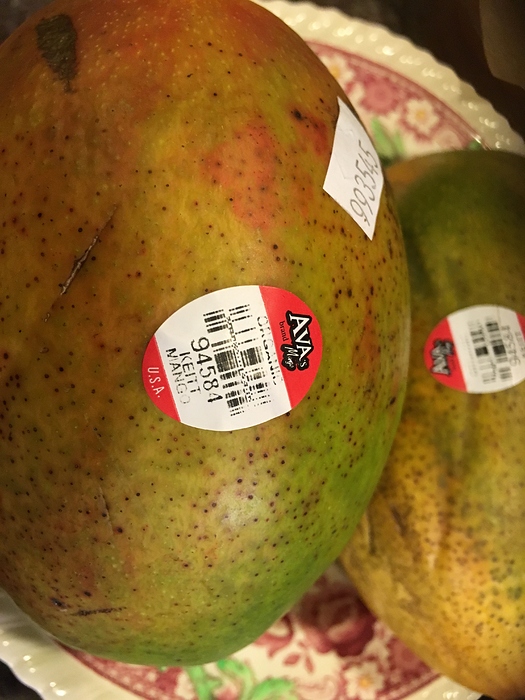 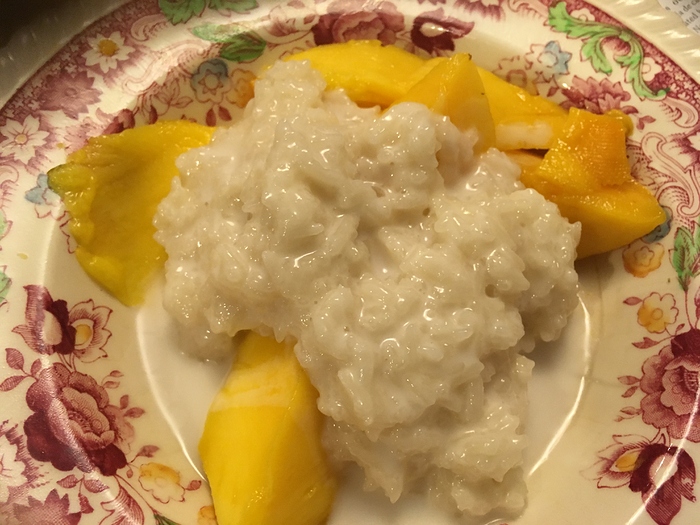 C5914C09-D77D-4A7A-8932-DF852BDFE603.jpeg4032×3024 1.8 MB
They were very hard when I got them but already had some aroma. We kept them on the counter about a week to ripen. We used them for mango with sticky rice. Both of the mangos were good but they were surprisingly different. The first one had pronounced turpene notes and a stronger acidity. The second one, which I think we ate when it seemed slightly less ripe than the first, had a more well balanced mango flavor, less acidity and was more enjoyable overall. I definitely want to pick up a couple more this week, they are really good.
Help cover Hungry Onion's costs when you shop at Amazon!