Not Your Grandmother's Meatball - The Atlantic

Maybe it’s my general interest in food, or perhaps the fact that I get some kicks out of poking fun at the Olive Garden*, but I thought I’d share this read. Besides, I know we’ve had some interesting Italian food history discussions here before: 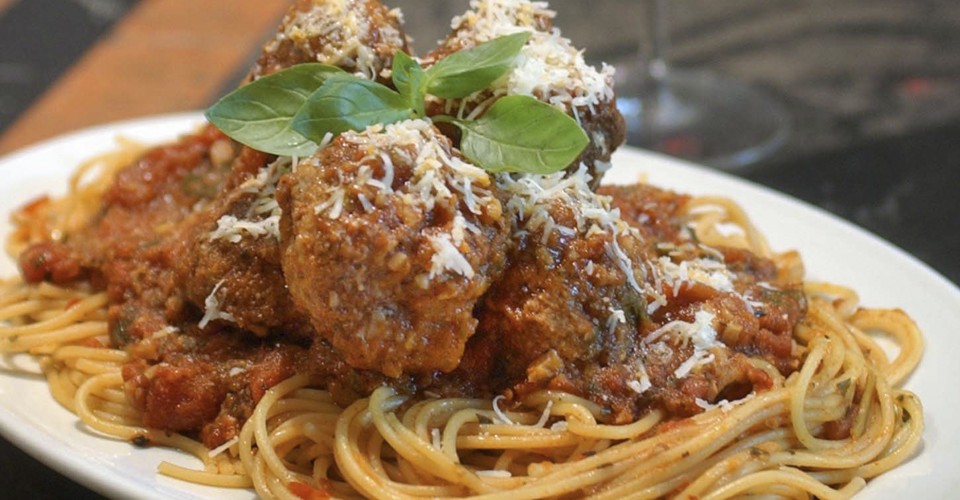 Not Your Grandmother's Meatball

The hearty Olive Garden staple is a far cry from the dish that Italian immigrants first brought to the United States.

“It works best when made from a combination of lean ground beef and fattier ground pork or veal, along with moist breadcrumbs, herbs, cheese, and a little bit of egg to bind the concoction together.”

I take exception and umbrage at this! The meatball I make now, after eyeballing Michael Maroni’s Bobby Flay take down, is based on his nonna’s 100 y.o. meatball recipe. Having eaten his, mine turned out nothing like them, but are superb for having his eye opening 4 eggs per lb of ground meat and 6 oz of grated pecorino romano, among other things I have used, but not close to his recipe measurements or subbed out totally.

I love kofta, too.

I think the article may be misleading as to why meatballs became a staple in Italian-American restaurants and spaghetti and meatballs became fixed in the minds on non-Italian Americans as an Italian dish.

Many immigrant Italians settled in areas of the US that were already dominated by immigrants from Germany and other parts of Northern Europe, where eating ground meat is common, and where meat is considered the centerpiece of a meal – maybe especially a restaurant meal – when served in combination with starches on the same plate as one course, not as a separate course, all alone.

While many of the first Italian-owned restaurants in the US served mainly their fellow Italian immigrants (often unmarried men) the foods they remembered from home, it is also the case that Italians opening restaurants where Germans were already settled and prosperous enough to eat in restaurants modified their Italian dishes to appeal to the palates and expectations of non-Italians. By plopping a ball of unspicy ground meat into the center of a plate of pasta, you created a dish you could hope to sell to a German diner.

I think that may be one of the reasons polpette escaped the kitchens of Italian home cooks and ended up on restaurant menus in the US. Italians, in Italy, very rarely eat fresh ground meat. Where I live in Italy, a patty of ground meat is called a “svizzera”, a name given to it by butchers because the only people who ever asked for it were immigrant Swiss workers. While Italians do like fresh sausage, it is nowhere near as common as cured salume. Fresh sausage or fresh polpette is something you might have on slaughtering day, when the buld of the meat would be ground up for salume. There are of course exceptions, and probably every region of Italy has some fresh ground meat dishes. Just speaking overall.

" My Nona’s kitchen was tiny, always packed full of family, friends, and neighbors, all of them women. The kitchen steamed with the humid scents of boiling water and aging cheese, the stinging pinch of garlic and tomatoes clinging to their tousled hair. Thick hands dug deep into bowls of ground beef."

So true. The only thing missing from my grandmother is the string tied across the kitchen with the fresh pasta hanging over it. I remember my grandmother always telling me she would never let anyone touch her balls…wait, maybe that was my grandfather telling me about his time in the army.

Surprised niether the writer or the editor knew to spell nonna correctly.

Your link takes me to a page saying that a Wikipedia entry for “strega nona” doesn’t exist. Googling further, I find there is an American children’s book by that name.

I live in Italy and have never seen nonna spelled with only two n’s – which doesn’t mean it’s never been done, but I don’t think “Strega Nona” is any indication that it is a common colloquial variation of “nonna,” either in Italy or generally among Italian-American families. By the way, omitting the third N would change the pronunciation in Italian, whereby it would also be a different Italian word that means “ninth”.

My American non-Italian family used to call my grandmother “Nama”, which got adopted because we started out as toddlers mispronouncing “grandma”, so maybe this writer’s family adopted “Nona” for some reason (based on the book?). The author solely refers to her as “my Nona”. Or maybe lots of Americans know this book and use this spelling. I’d never heard of it until now.

[Edited to add: I found this link, and it’s quite interesting as to what Italian-Americans call their grandparents. But in Italy, it is nonna and nonno.

Would an Italian-American call her grandma 'Nana'?

I need help with a story I'm writing. An American girl's grandmother is Italian. In the Irish-Italian neighborhood where I grew up, a lot of grandmothers were called Nana. But I can't remember if they were Italian or not. I have the girl calling her...

I think this is one of those discussions where everyone is right. Like bubby, botchie, bobchke, bobby, for some eastern European grandmothers, I grew up near first generation Italian neighbors who pronounced nonna as nawnie, others nunie. In Jewish families, every family has it’s own family pronunciation for old country yiddish words for everything, and multiple spellings.

Win win. Every Italian family has its own authentic meatball, Jews have our own brisket recipes, on and on…

Just to reiterate. I’m sure there are many English words I’ve never heard of but that doesn’t invalidate them.

Can we leave petty grammar/orthography pissing contests off the boards, just generally?

It makes nobody involved look good, and is unnecessary.

I promise not to korrect anyone ever.

I had a large piece of fatty beef and wanted to make meatballs, so I made half with the eggs and pecorino Romano, and the other half according to my standard recipe. Both were good, but I preferred my old recipe. Of course, I bake them, instead of frying them and then finishing them in a sauce.

Great link. Thank you for posting this.