Viet Guy is one of two Vietnamese restaurants along Northenden’s “main drag” (we’d been to the other one before and thought it OK). We came across this newish opening last year, quite by chance, and popped in for lunch. Loved it and decided that we must come back for dinner. It proved to be a good decision. The layout and furnishings feel more café than restaurant. That actually felt right for the casual nature of the food. And service was lovely – welcoming, efficient and generally very smiley. It’s a short menu although with dishes being available with different proteins , it feels longer. So, for instance, with Vietnam’s best known national dish of pho (which I had for that lunch), you can get it with beef, chicken, duck, prawn or tofu.

Goi du du is the Vietnamese take on the Thai som tum salad, albeit without the use of chilli. So, what you have is a light fresh plate of grated green papaya, mango , carrots and herbs. It was taken plain but can be enhanced with chicken or prawn. The other starter was Banh Xeo – a very thin, crispy pancake made from rice flour and vivid yellow from turmeric. A different texture to an Indian poppadum but the same sort of crispiness. Stirfried onions and beansprouts and your choice of protein, in this case tofu, are added and the pancake folded round them. There’s a little mixed salad on the side and dish of fish sauce for dipping. It looked lovely and tasted just as good. Again, really light and fresh with the contrasting crunch from the pancake.

We both went with noodle dishes for main courses. Different variations on the same theme. Bun Hanoi is in the northern style, whilst Bun Saigon represents a southern presentation. There didn’t seem to be much difference between the two (we claim no knowledge about Vietnamese food, so maybe others would detect differences). Both have noodles, vegetables, side salad, chopped peanuts, dipping sauce, etc. However, with the latter, the protein is stirfried and they use a little chilli, whereas with the northern version the meat is char-grilled. We had the Saigon version with pork and the Hanoi with a beef and spring roll combo. The spring roll was interesting – a different texture to the more familiar Chinese version – lighter and crunchier, so presumably a different type of wrapper is used. Both dishes come with a dipping sauce. Both are complete successes.

In due course, we may run out of things we fancy eating on the short menu. But not for now. We’ll be back.

Bun Hanoi is in the northern style, whilst Bun Saigon represents a southern presentation. There didn’t seem to be much difference between the two (we claim no knowledge about Vietnamese food, so maybe others would detect differences).

One broad generalisation about Vietnamese food is that, as one moves from Hanoi in the north to Saigon in the south, the food becomes sweeter and spicier. Also, the Southerners tend to go for more greens/vegetables whilst the Northern versions are more meat-heavy.

I remembered having breakfast at an iconic Saigon sandwich shop, Hòa Mã, back in 2015. The place was recommended to me by Robyn Eckhardt (Eating Asia). It served the best egg breakfast in town, Bánh mì Op La, which was two eggs, perfectly-cooked till translucent on the outside and still deliciously runny inside, accompanied by three types of Vietnamese sausages (chả lụa): slivers of xúc xích (pork sausage), 3 wands of chả cá (wrinkly, spongey, deep-fried fish cake), a couple of cubes of very tasty thịt nguội (ham), onions and scallions. Robyn also reminded me to order a little side-dish of pate and mayonnaise, which improved the overall flavour of the dish tremendously. 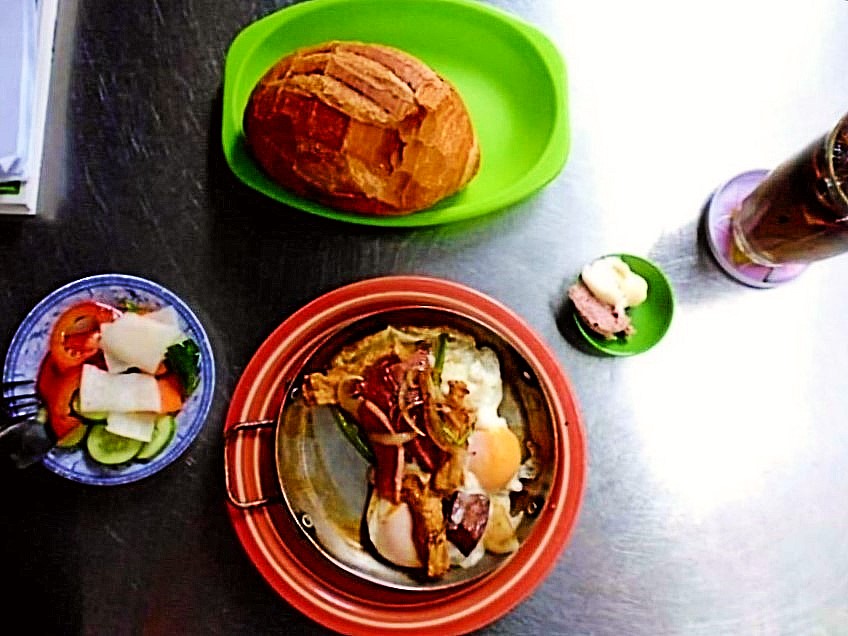 The little dish of pickled radish, cucumbers and tomatoes on the side was a Saigon touch - as the owner of Hòa Mã, Nguyen Thi Tinh, was an emigrant from the North/Hanoi back in 1960. He started selling his famous banh mi (Vietnamese baguette) sandwiches on the streets of Saigon, and realised that he needed to provide some vegetables/pickles/greens to suit the Southerners’ palate. In the North, banh mi was simply sliced meats & sausages between bread, nothing else.