Noodle Shanghai is inexpensive— I got two cold appetizers and a soup for $21 including tax and tip. and had almost a meal’s worth of leftovers. The complementary peanuts with seaweed was good, cucumbers with garlic less so. I started with the #4 Baked Bran which is one of the stronger versions of Four Happiness Gluten in the area. The gluten was the spongy type, hand torn to soak up the more savory been sweet black sauce. For $4.49, you get a generous amount of black mushrooms, and plenty of lily buds and slices of (I think) winter bamboo shoot for texture contrast. There’s a pleasant, raisiny flavor to everything. 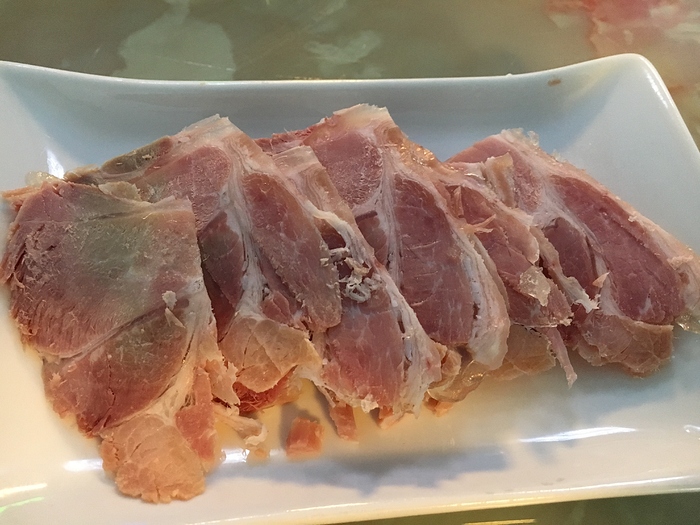 The #7 Zhenjiang pork was very salty, and dry, kind of reminded me of corned beef. It is supposed to be crumbly? 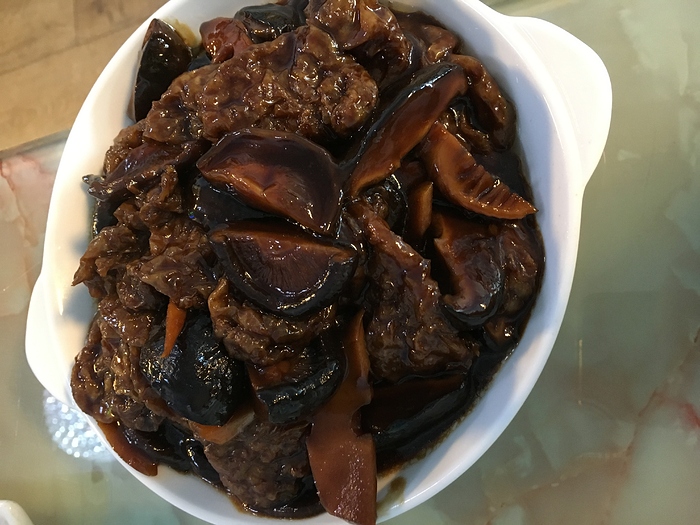 The presentation of the #58 mushroom gluten noodles confused me, so perhaps someone in the community can give some context. The server placed two bowls in front of me-- a huge one with stock, noodles, a hard boiled egg, and shanghai bok choy, and a smaller dish containing gluten, winter (?) bamboo shoots, and black mushrooms in a fatty and viscous black sauce. The server said that some people dump the black sauce into the noodles, but that she prefers to eat them separate. Another table enjoyed them separately as well, so when in Rome…

The gluten concoction was fantastic, and the gluten was more like a deflated balloon than the spongy “bran” I was served in the appetizer. It was rich, but not to the point that I wanted to dilute it in the soup, so I ate everything separately. Eating it this way, the soup was good for balance, but not an interesting stand-alone item.

What else is good here and are there any dishes that aren’t available at the other Shanghai noodle
places? The only item on the server encourage me to get was the XLB, but that sounded like a bad investment given that I was eating alone and there were so many inexpensive and interesting sounding dishes.

The “deflated balloon” gluten was most likely you mian jin, (油面筋) while the baked bran in the first dish was obviously kao fu. Yes, there appears to be dried bamboo in the first dish (too hard to see in the third one).

I’ve never seen the particular noodle dish you mentioned, but it doesn’t surprise me. Serving noodle soup with the intended toppings on the side (or “over the bridge”*) is definitely a common Shanghai, or more precisely Suzhou, thing, and how you combine the two is a user option. I’d be curious if the broth served with this particular dish was vegetarian.

I’d guess that the principals, or at least the chef, at Noodles Shanghai are from Jiangsu rather than Shanghai proper. Maybe the new wave of “Shanghai” cuisine is actually a wave of Jiangnan cuisine.

*The term “over the bridge” is not exclusively a Yunnan term, but in Suzhou there are no fancy stories to explain it; it simply refers to the motion of lifting the toppings from one bowl to the other with chopsticks. You can specify you want the toppings on the side with such a motion of the hand.

The pictures on Yelp that show what appears to be a mural of Lake Tai on the wall and a Wuxi ceramic cat in the cabinet of artifacts convinces me that this is a restaurant with Jiangsu at heart.