Nibong Tebal is a small agricultural village in Seberang Perai (formerly Province Wellesley) which has been in existence since the early-19th century. It was the base for the Penang Sugar Estates Limited, owned by British Liberal MP, Edward Horsman, in the mid-19th century. Edward’s brother, I.D. Horsman worked for the British East India Company, and had obviously advised his brother on the potential of the sugar plantation industry in the British Empire’s Far East reaches. By the 1850s, Edward Horsman had become the largest sugar grower in Malaya, with 12,000 hectares of sugar plantations spread over 6 estates in Penang: Caledonia, Victoria, Krian, Golden Grove, Jawi and Val d’Or.

Such was the magnitude of Horsman’s business influence among British planters in Malaya that when the-then Prince of Wales, later to be King Edward VII, visited Penang in 1870, His Royal Highness stayed overnight at the Caledonia estate, and was even taken out hunting by the general manager of the estate.

However, the onset of the Crimean War drove shipping costs up, and cash-strapped Edward Horsman had to ask his wealthy in-laws, the Ramsdens, to bail him out. Sir John William Ramsden and Sir John Frecheville Ramsden took over the ownership of the Penang Sugar Estates Ltd, and family records of the business activities in Penang involving Horsman and the Ramsdens can be seen in the West Yorkshire Archive (WYA) in Leeds, the Buckinghamshire County Record Office (BRO) in Aylesbury, and the “Ramsden papers” kept by the Gordon-Duff-Pennington family at Muncaster Castle in Ravenglass, Cumberland.

The British Empire was at its height then, and British India provided a steady stream of riches back to Great Britain. At the time, Penang, Singapore and Malacca were formally under the control of the British East India Company, and were administered from Calcutta. It was only in 1862 that the three port cities were combined to become the British Straits Settlements, and by 1867, were formally separated from India and administered directly from the Colonial Office in London. The size of business from the Ramsden baronet’s sugar plantations in Nibong Tebal ensured the town was directly connected to the rest of the British Empire and all the major cities of the Far East then: Calcutta, Madras, Hong Kong, Singapore.

When the sun set on the British Empire a century later, so it did on Nibong Tebal. Today, it’s just a small town with a population of 2,000. The sugar plantations are long-gone, and the the whole place is now not much more than a sleepy hamlet. But for us foodies, Nibong Tebal is well-known for one thing: its amazing prawn curries, especially by the one who started it all: the 7-decades-old Lim Aik Chew restaurant, located near the muddy banks of the Krian River where the fishermen unloaded their daily catch. 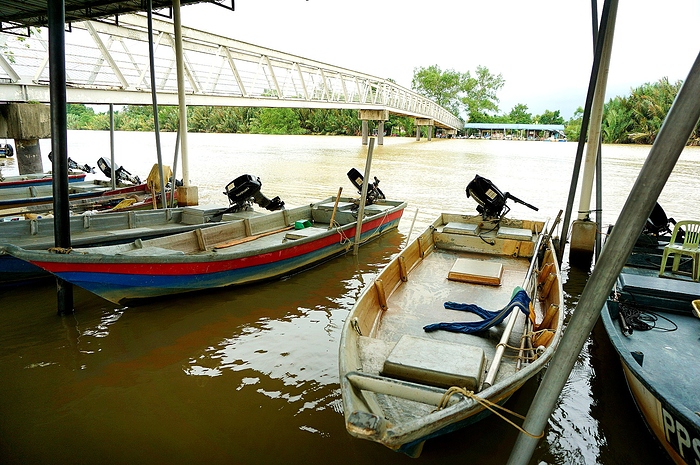 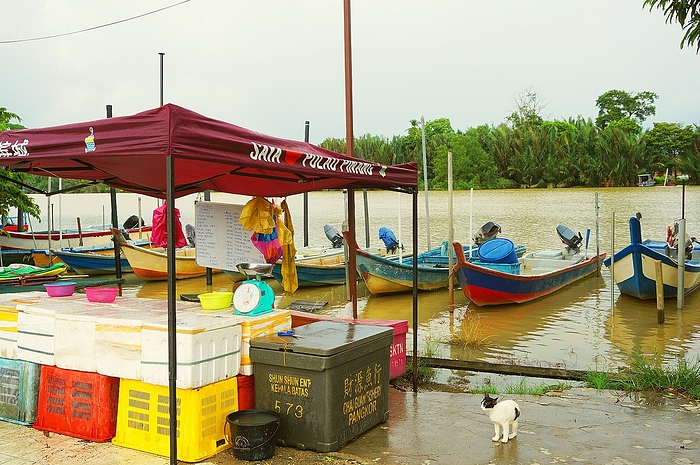 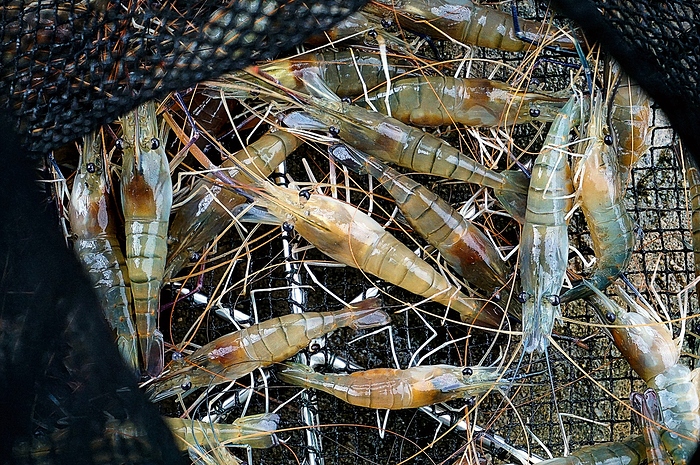 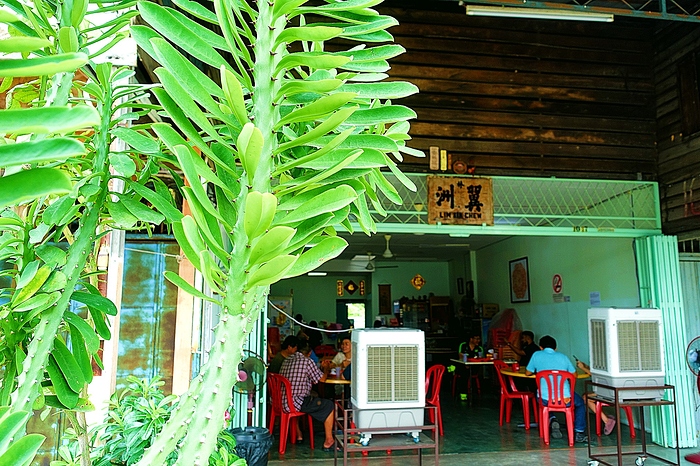 Current proprietor, Lim Yeou Tiang, was the one who started offering prawn curry 20 years ago at the eponymously-named restaurant founded by his grandfather, Lim Aik Chew, over 70 years ago. Originally, Lim Aik Chew (the man, not the restaurant) specialised in baking Hainanese-style buns, with kaya, groundnut or red bean filling. The buns are still on sale at Lim Aik Chew (the restaurant) nowadays 70 years later, but are now made by the town’s main bakery - called (what else?) Nibong Tebal Bakery. 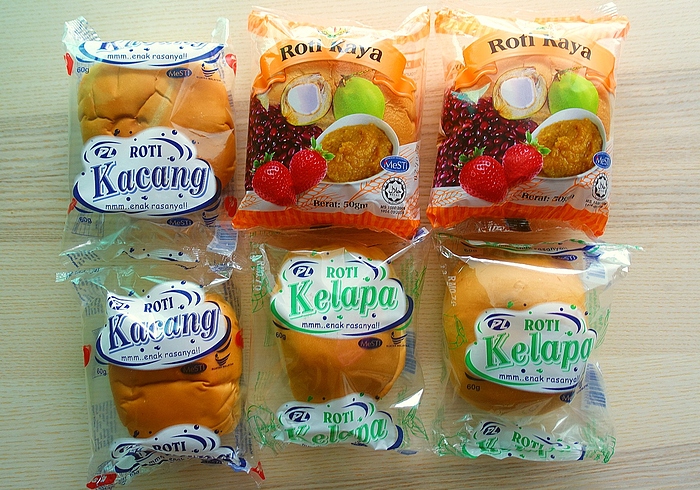 These large white bread loafs are known as “Benggali roti”, and are de rigeur in traditional coffeeshops or kopitiams all over Malaysia and Singapore. 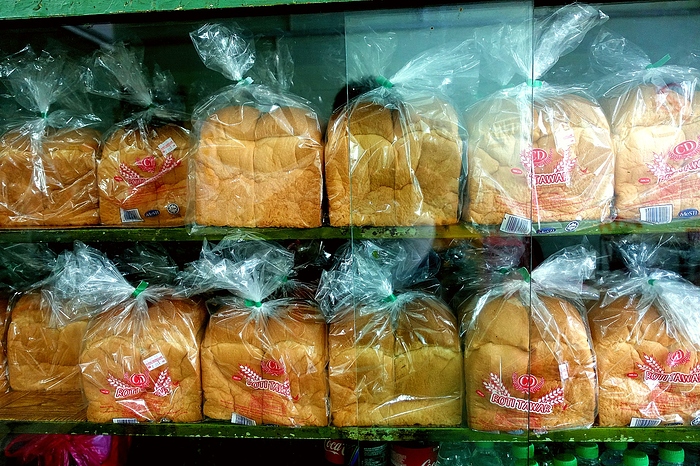 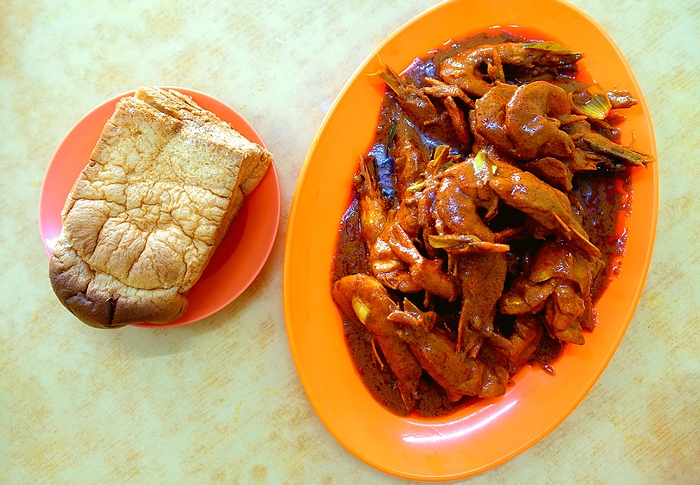 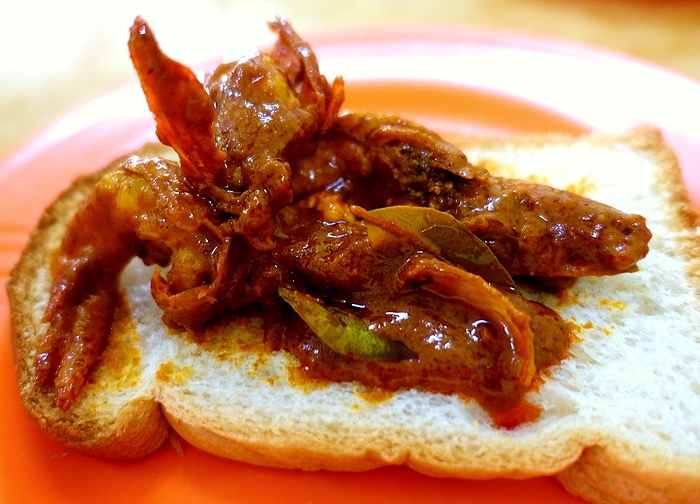 I wasn’t sure what to expect when I came here. Quite a few friends had waxed lyrical about Lim Aik Chew’s prawn curry, and I was rather afraid that I might stumble across an over-rated dish, as usually happens when one comes with heightened expectations.
Well, turned out, THAT prawn dish was good, and I do mean very, VERY good. It was basically a large platter of ultra-fresh jumbo-sized prawns cooked using Indian curry powder spices, plus some typical Hainanese add-ons (which we can never find out about) which included copious amounts of sliced onions, local kaffir lime leaves, just maybe galangal instead of ginger. Whatever the condiments the owner-chef, Lim Yeou Tiang, put into his curry pot, the result was simply amazing. 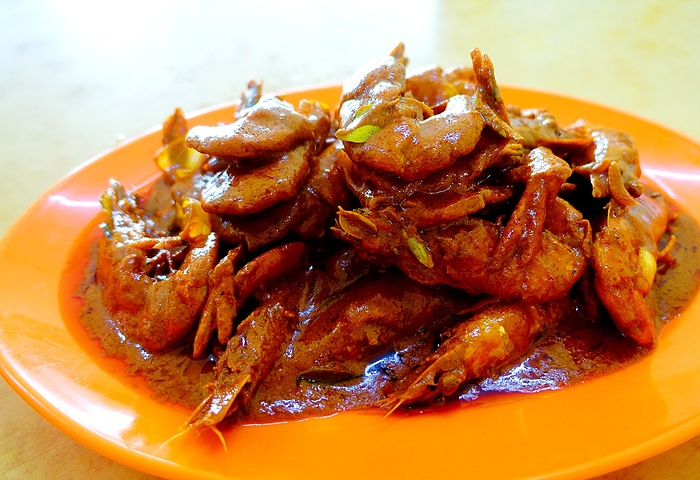 Hainanese-style curry, like Japanese curry, is never too chili-spicy, so one can actually taste the complex, myriad combination of the “other” spices in the mix: cumin, coriander, fennel, cardamom, cloves, cinnamon. So good. 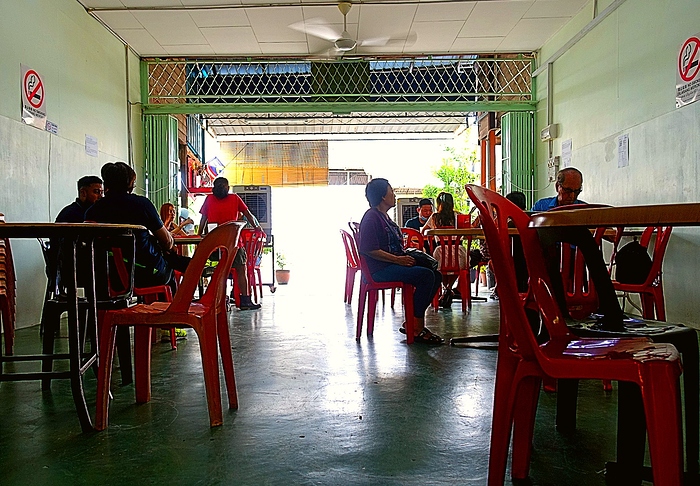 Good looking food. The use of the bread was interesting.

And thanks for the history. It comes at a time when our period of empire is once again under scrutiny in the UK, as a consequence of heightened concern in conjunction with the Black Lives Matter protests.

Thank you for the history and the prawn curry pictures as well. The curry looks wonderful!

Still a good thing it was under British control. The Dutch would have ruined everything. Just look at all the old colonies. The Dutch are still paying through the nose to this day. A combination of different factors but mostly they got lazy and bad business decisions were made.

Still a good thing it was under British control.

Yep, we got good at doing imperialism. Made that mistake with the Americans but once we’d moved on from that, we got really good.

Penang was founded in 1786, a mere 3 years after the British lost the American colonies at the end of the American Revolutionary War.