Went on a trip to New Orleans from the SF Bay Area, my first visit. My flight to New Orleans was delayed for a couple hours and I didn’t get into my hotel in the French Quarter until about 11:30PM on a Saturday. I had planned to have a late dinner at Sylvain (my brain was still on Pacific time anyway), but they were closed so I walked to Verti Marte, which is open 24/7. Walking down Bourbon Street on a Saturday night was an interesting experience. Neon lights, loud music, lots of people on the street and galleries in various stages of inebriation, police on horseback, etc.

I got the "All That Jazz”, a sandwich with sliced turkey, sliced ham, fried shrimp, mushrooms, tomatoes, “wow sauce,” and Swiss and American cheese on a seeded roll. You order at the counter and pay at the register. There aren’t any tables here as it’s basically a convenience store with a food counter, so I walked back to my hotel to eat it. It was an ok sandwich. It maybe would have been better If I’d had a few of those green hand grenade drinks for sale on Bourbon beforehand. The bread was a little on the stale side, and the “wow sauce” seemed to be mostly mayonnaise. Cheeses were melted and glued everything together. The best part of the sandwich was the shrimp, maybe I should have tried a shrimp po boy from here instead. 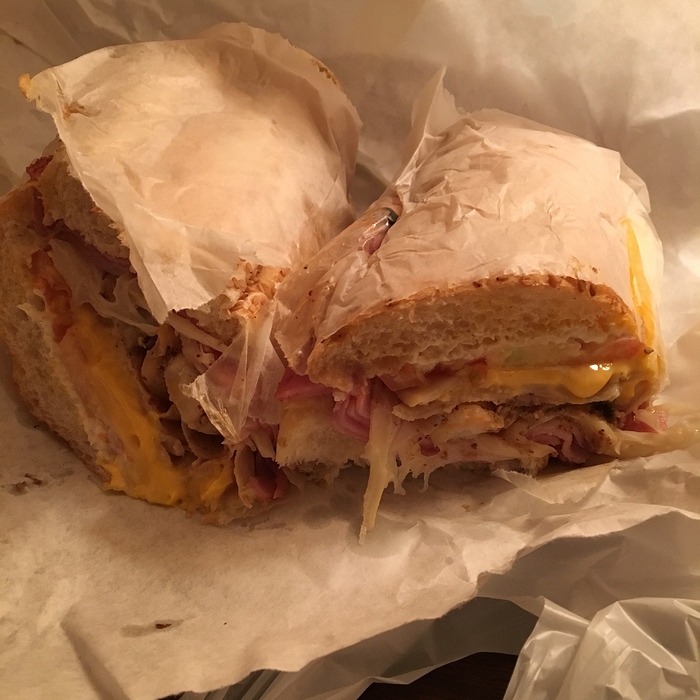