Playing Muni Roulette on Market Street today, I decided to jump on the 31 Balboa to check out Village House (鄉村风味), the Northern Chinese restaurant that recently replaced Jook Tme in the far outer Richmond (3398 Balboa at 35th Ave). I was probably drawn there by the possibility of a roujiamo (A Yelper had mentioned a “Chinese hamburger”), but since it was past 5:00 when I got there I decided to make that the appetizer to an early dinner. The young woman server was eager to promote the house-made xiaolong bao, dumplings (jiaozi) and noodles, so I ordered a basket of XLB and a lamb dumpling and noodle soup as my mains.

The roujiamo (“Chinese Hamberger” on the menu) was on the small side, but heck, it was a whole $2.95. The panbread bun was about the right thickness, browned but not greasy, though a bit less dense than some. The meat filling was appropriately porky and salty in flavor, though the texture seemed wrong because it was coarsely chopped (loin?) instead of stewed, so the sandwich was a bit dry as well.

I don’t know if they knew what they were getting into, boasting about their house-made xiaolong bao in earshot of both Shanghai Dumpling King and Shanghai House, but they didn’t embarrass themselves. Their XLB is probably better than the last I had at SDK, but not as good as I remember Shanghai House’s to be (though I haven’t been to either of these places in a long time). The wrappers wee delicate, and the soup ample, though they need to push the needle away from the salty side of the dial a bit toward the sweet side. But then, those were Beijingese voices floating around the room, not Shanghainese.

The soup was hearty, with six lamb dumplings and a long ton of noodles. The dumplings were meaty but not paticularly lamb-y (but I’d like try them again, outside of soup, to be fair). The noodles were springy and fresh, if not hand pulled. The broth seemed under-seasoned, particularly lacking salt, of all things. Since there was no salt shaker of the condiment tray, I used a bit of soy sauce along with chili paste to sex it up.

The menu at Village House is what I’ve come to recognize as typically eclectic Northern Chinese restaurant fare, with a slim stock of indigenous dishes augmented with a smattering of Shandong, Shanghainese, Xi’an, Sichuan and Xinjiang offerings. 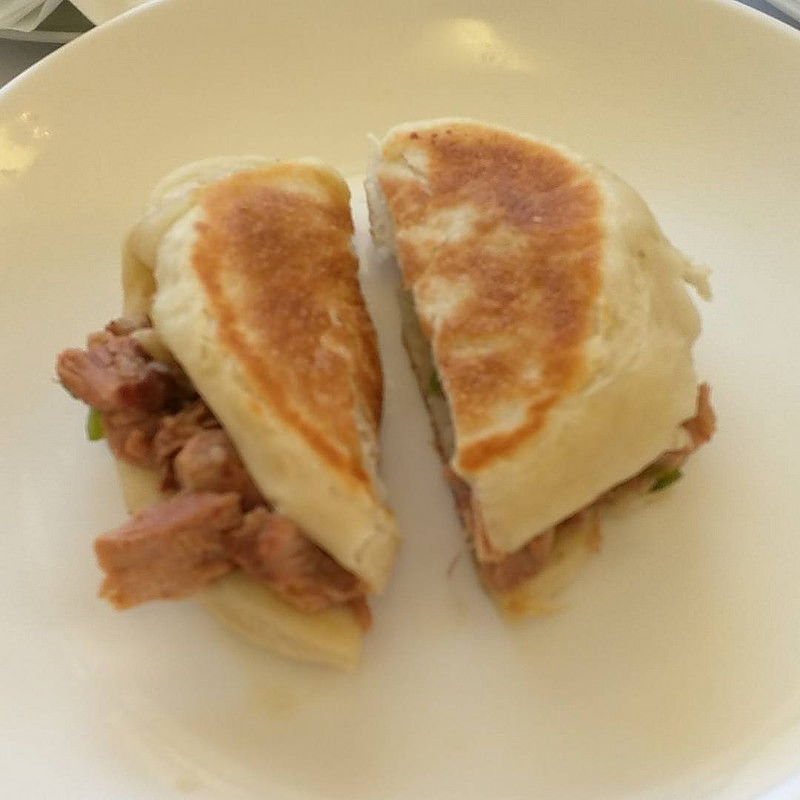 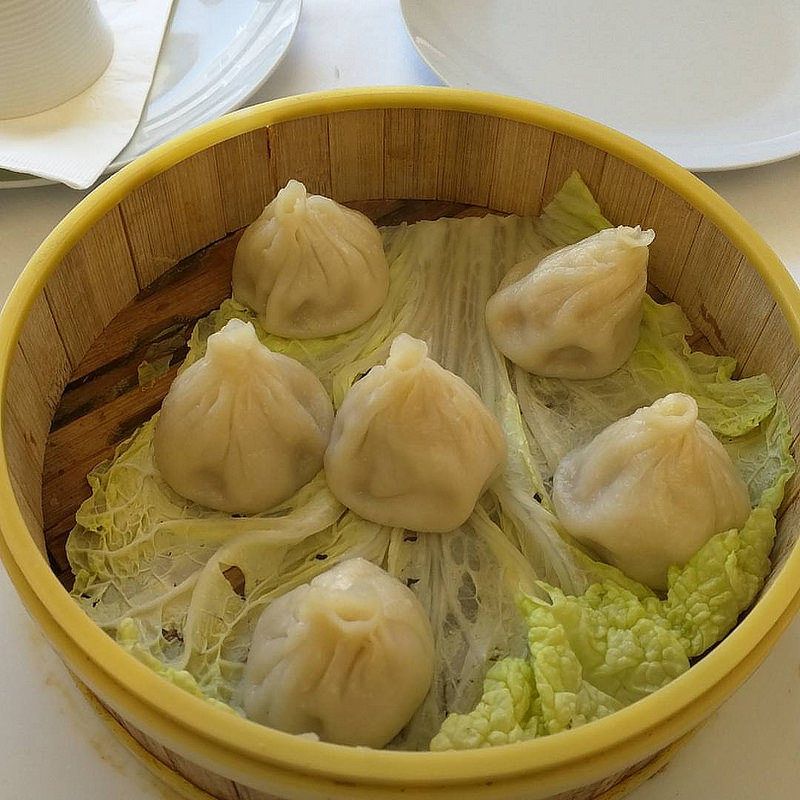 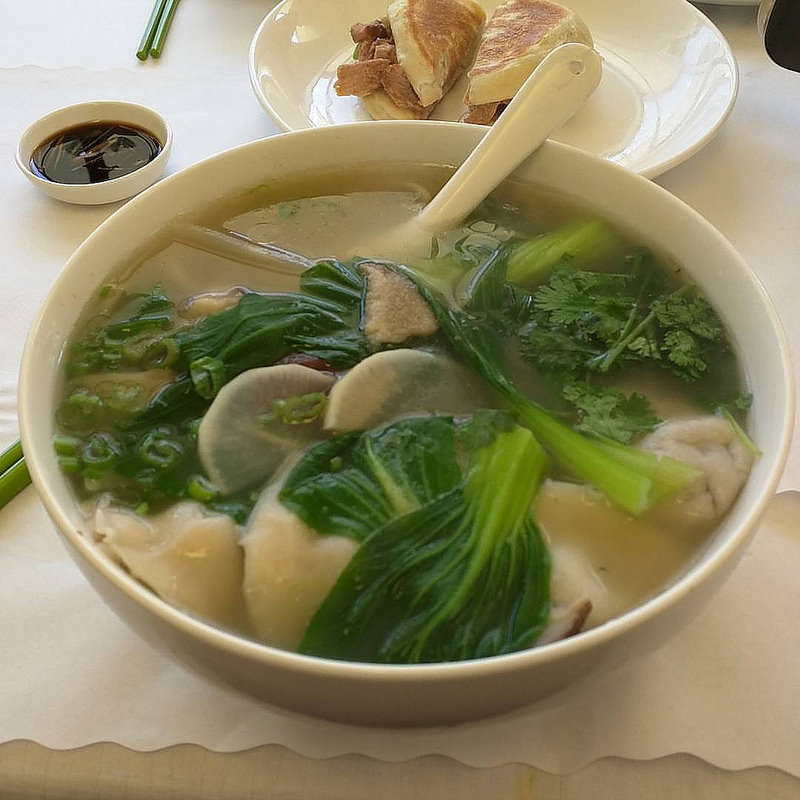 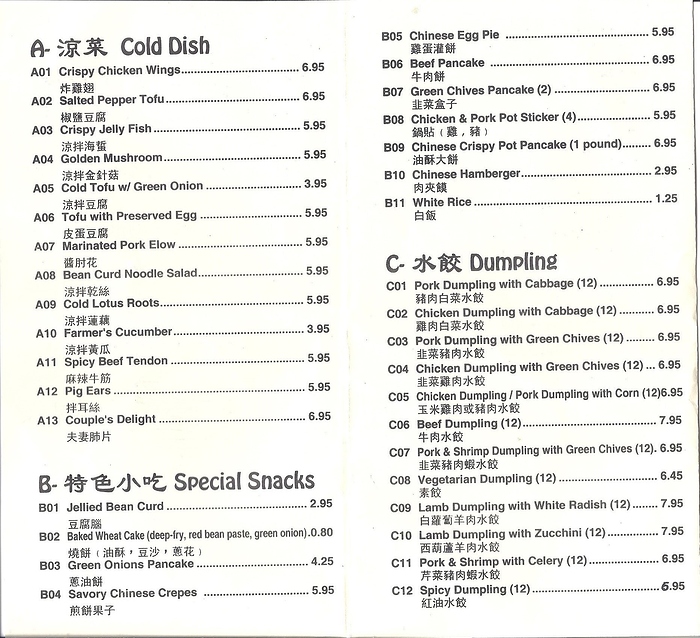 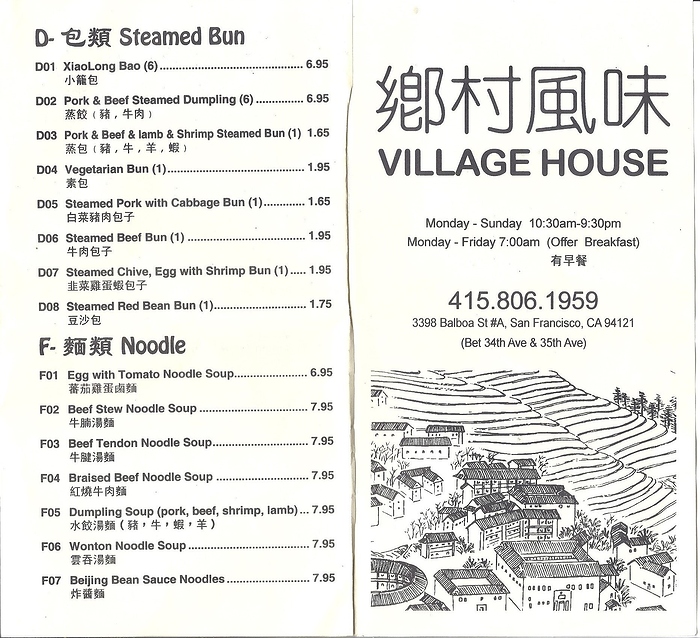 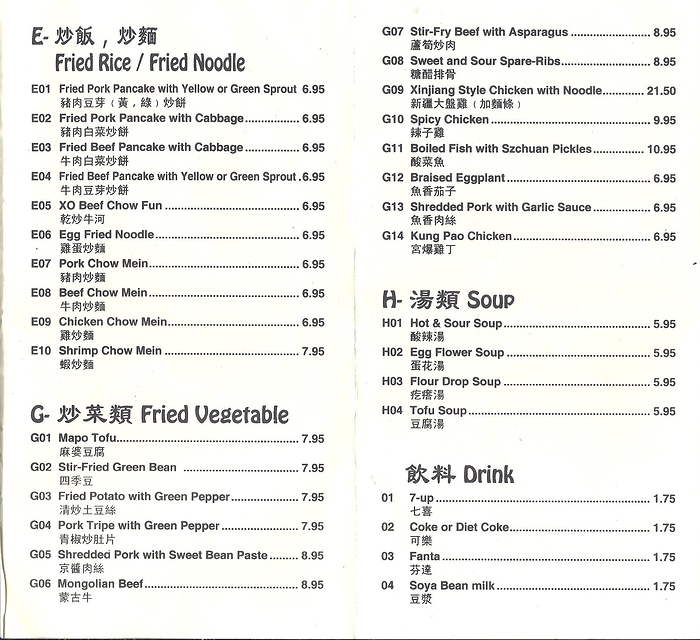 I wonder if this is another offshoot of the Kingdom of Dumpling empire.

Doesn’t appear to be. It’s registered to Village House, Inc. with an Ingleside address and a principal named Wen Hui Dong.

I like the picture of chao bing I see on yelp (looks like stir fried with beef and bean sprouts), but can’t decipher how to order it from the menu. Is it the “Savory Chinese Crepes” option? And does anyone know what to expect from the $.80 option “Baked Wheat Cake”?

E01 throught E04 are the chao bings. The picure is probably E04.

B02 is a shao bing. Not sure how to parse the language, but I think you have a choice of crispy (deeo fried), sweet (bean paste stuffed) or savory (green onion stuffed).

Thanks, don’t know how I missed that in the three times i pored over the noodle section. 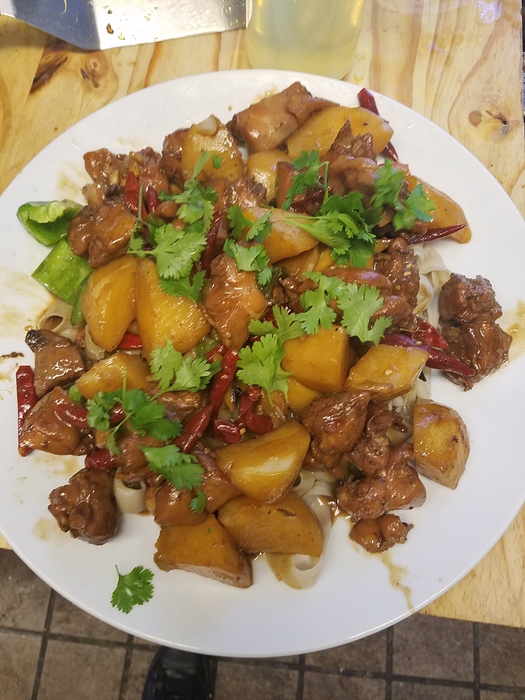 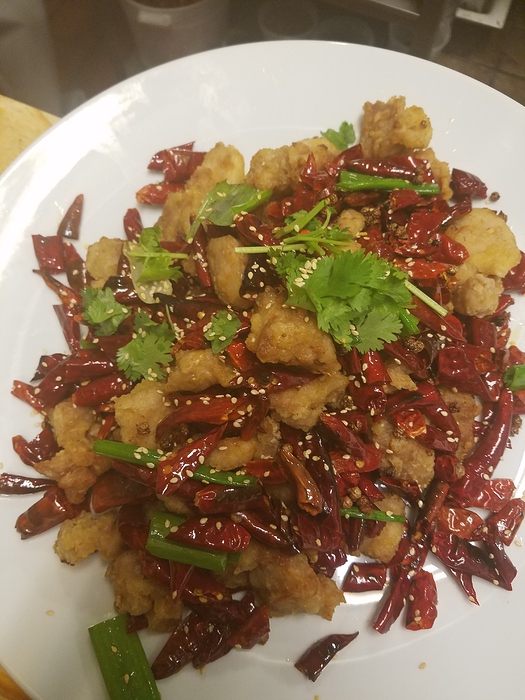