A restaurant that I’ve always passed by but never really thought to try, I finally got to eat at New Jumbo Seafood Restaurant in the sunset district. I will say just getting a seat was a rather time consuming process on the weekend though (at least an hour at around 6 pm)…

Anywho, lets start off with some soup! 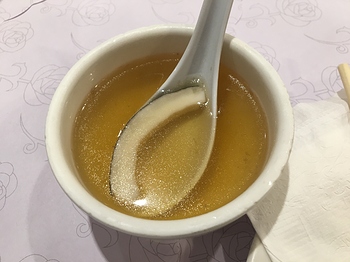 We got the sea coconut, conch stewed chicken soup to start off our meal. Honestly I thought it was a good price at around 20 bucks for the tureen. Lots of tables were getting the double boiled soups as well. We called a day before to see if we need to preorder but they just told us to come in. We did ask to set one soup aside when we were waiting in line though. 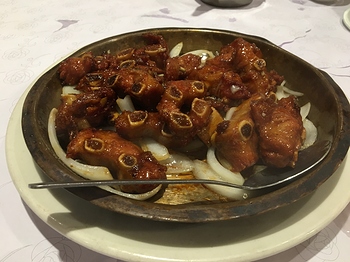 Next up were these fragrant house special spare ribs w/ bbq sauce. I thought these were quite good as the aromatics from the onions brought a great delicious smell when the dish was presented. The ribs weren’t too stringy and didn’t have tremendous bits of fat so I was quite happy. 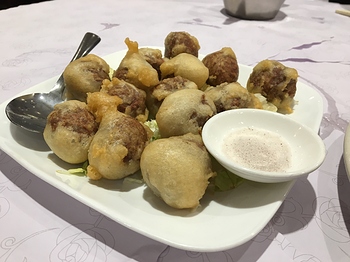 Alright… this dish was ordered by me… the name was just odd. Some sort of deep fried beef ball with special salt. I was intrigued and trying to figure out what this was… in any case, imagine those Vietnamese beef balls found in pho and batter it and then deep fry them. Add some salt with a dash of msg there and you have that special salt. I can’t quite say it was bad, but I definitely won’t order this again… 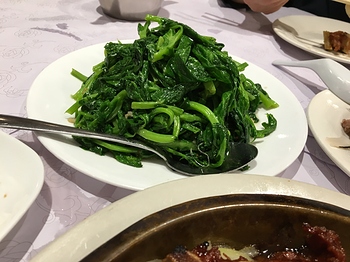 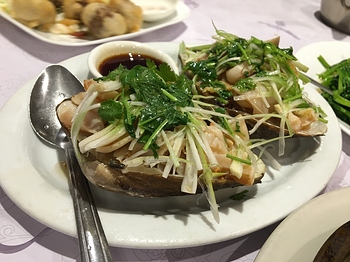 Saw a few tables order empress clams and we decided to do the same. I’m sure these are primarily a vector for the seafood soy sauce but… I’m more than inclined to ignore that fact. With vermicelli on the bottom, this was great. The clams weren’t overcooked at all. 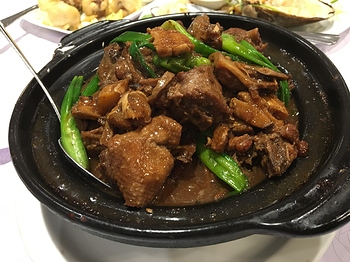 And for the last course we got a braised duck with ginger. I liked the dish but I’ll opt for something else next time. It was on the saltier end and probably go for something meatier than the duck. 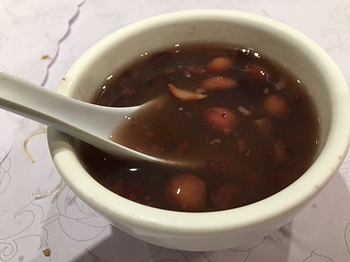 Complimentary dessert soup but it was rather thick and luke warm.

Overall, I quite enjoyed the meal and definitely willing to try out other things. I’m just ecstatic about the soup… but price wise it was rather reasonable with the total around 100.

That seems to be a quite economical meal overall. How’s the price of other menu items and live seafood?

How’s the price of other menu items and live seafood?

Most dishes seemed to be around 10/12 dollars. I didn’t ask for the price of the seafood as we decided on our meal while waiting outside based on their to-go menu… lol. But no, everything seems relatively economical (for uh… bay area standards)!

So I’m actually sorta happy about checking out this place and we went here a few more times. 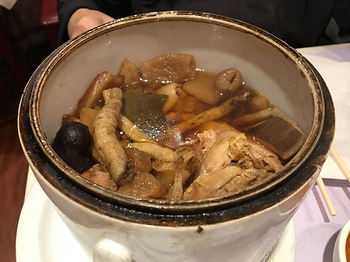 Started off with some double boiled soup this time with the wild tuckahoe turtle soup. 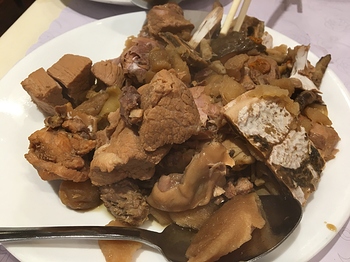 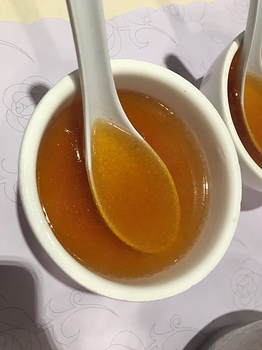 Nice clear broth with quite a savory taste. The turtle soup had some cartilage/jelly texture on the side of the turtle shell that reminded me of the gelatinous texture not that different from sea cucumber… mmm… its interesting haha. Not certain the turtle provided too much flavor as the back bone of the soup is still pork and chicken but regardless, immensely enjoyable on a chilly SF night. 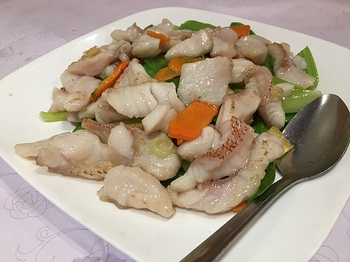 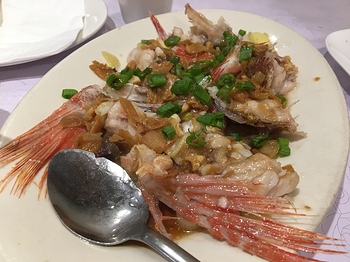 Following the soup we ordered fish 2 way style. The fillet of the fish whose name escapes me right now… was stir fried with some celery, carrots, and ginger and was nicely done.

The boney parts of the fish were cooked with some preserved veggies, green onions, and ginger. This was the saltier dish of the two, but had great flavor. Rice is a must! 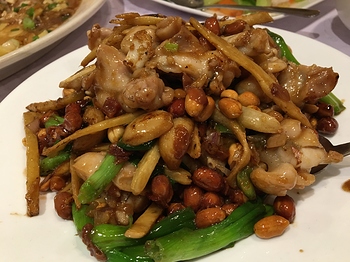 After the fish we received a dish whose name… also escapes me. Its the stir fried frogs with peanuts, green onions, and ginger. The green onion and ginger mix in these past few dishes were somewhat similar, but I still liked them. This dish is on the heavier end of the seasoning, with the peanuts giving a nice textural crunch. In case anyone never had frogs cooked in this style, the meat isn’t just the legs and it ends up a little bonier than you would expect, so just watch out! 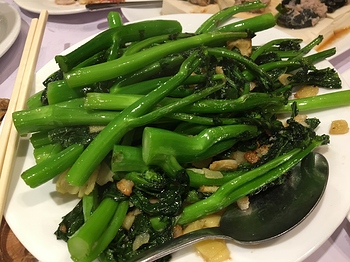 Getting some needed veggies as well, we have the gai lan/Chinese broccoli with rice wine and sugar. The veggies were crisp and had a slightly sweet taste due to the sugar and wine. 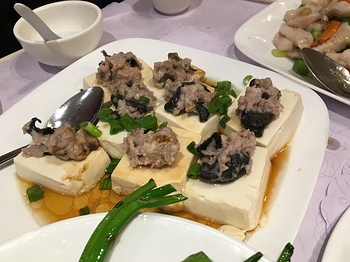 And for the last dish we got the steamed tofu with minced pork and mushrooms. I actually liked how they minced the pork as it texturally had the feeling that the pork was minced and not pounded into paste. Steamed over tofu with soy sauce, it goes quite well with… rice! Rice is the answer to everything… 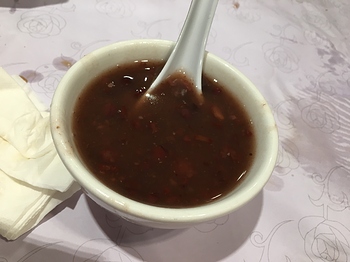 Lastly for dessert, we got red bean dessert soup.

Anywho, I think New Jumbo still does a great execution on dinner!

So I’m actually sorta happy about checking out this place and we went here a few more times.

The thought of turtle soup makes me sad. I don’t have time to delve - is turtle meat illegal in the US?

For me, to the chagrin of others, food is absolutely political.

Mmmm… I don’t think its illegal or it wouldn’t be on the menu. Shark Fin’s been gone for a long time and I’ve never seen it around in California. I weirdly see snapping turtle meat on sale online though o_O;

Not sure exactly what the tuckahoe turtle is though…

You can buy box turtles (or what looks like them, anyway) live in Chinese seafood markets in SF. I assume they will dispatch the turtle for customers who ask, so probably not illegal? From what I can tell snapping turtles as food are fairly common in New Orleans - some restaurants there are famous for turtle soup.

It’s mostly sea turtles that are seriously endangered I think - snapping turtles are extremely abundant in the South, and I gotta think whatever box turtle I see sold in SF is a species that’s doing all right.

I have a question about the minced pork steamed tofu dish. Does it have a sour taste at all? I’ve tried this dish a few times, mostly at Hakka restaurant and it always seems to be a little sour. Which at first makes me think the tofu is old, but I doubt tofu would be old at a restaurant that is serving tofu all day long.
Thanks!

Mmm no I don’t recall the tofu being sour or any sort of fermented taste. I can kinda recall that slight sour/bitterness with stinky tofu but I don’t go ordering that with my free will…

I can’t recall the type of tofu used in Hakka cuisine though. I recall they have a stuffed tofu but that should not be sour… Hrm… maybe someone has a better idea on tofu than I do can chyme in to this.