With Stewart’s on 36 in Hazlet closing at the end of summer, a new business has already moved in, though still not open. I was passing by and saw (I think) a sign that said “Crown Chicken” with a plethora of signage including fried chicken, pizza, sandwiches, etc, etc.

While such pizza and fried chicken joints are very popular in more urban areas (there is a thread somewhere on here which discusses that), I am not sure how it will fare in Hazlet. Maybe in the summer with hordes of cars passing en route to the beach, but for year-round? I don’t know.

This comes less than a year after La Rosa Chicken and Grill opened up about two minutes away (also Hazlet). 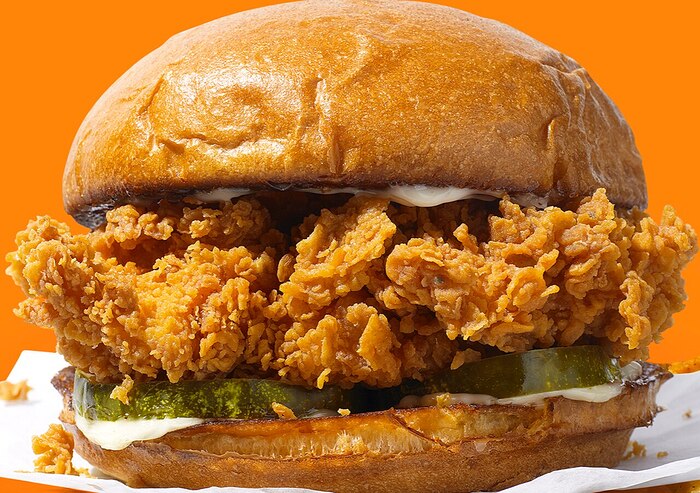 Fast-food joints continue to open throughout the state

They’ll have to go head to head with these guys, and I hated to admit it, but their chicken sammies are better than Chik-Fil-A

I forgot all about that. They are also about 2 miles away.

Between Covid and Popeyes, a tough time to be opening.

The Stewart’s is in Hazlet? I thought it was further south than that. Hmmmmmm (the one on 79 in Matawan is still open correct?) While I understand and agree with your assessment it might be a tough time to open, I wonder if the car-hop dine in car experience might be an advantage.

@coldbeer70 I like the Chik Fil A sandwich better than Popeye’s but finding myself having the Popeye’s more than Chik’s, simply because I won’t wait in the ridiculous lines at Chik. The nearest Chik to me is Monmouth Mall and the line is easily 20 deep each time I go (which isn’t that often to begin with) and I simply won’t stand in that line.

Agree with this normally. However last time I went to the Popeyes by us it was an epic shitshow. Drive thru was down and it took 25 min of waiting indoors for a meal I prepaid for online 30 min prior. Not one person working had a clue what they were doing. Really turned me off on the em for a while. Might have to try the shake shack for fast food chicken fox for next time.

Have you been to La Rosa? One opened in Sea Girt, less than 10 minutes away from me and which I pass frequently, but I’ve seen no reason to bother going in.

There was a La Rosa chicken (perhaps the original) when my office was on 79 in Morganville. It was pretty good, if you are into the Boston Market type fare.

First of all, any new chicken place opening is always good news!

As for the chicken sandwich wars, I love Chick Fil A, but there’s no competition since Popeye’s uses a brioche bun!

There was one in Madison (!!) and when I was working nearby, I tried it. Once. #saltbomb
But as @NotJrvedivici said, if you’re a Boston Market fan, you might enjoy it.

I tried the Popeyes Chicken Sandwich, it was pretty good but not too hot temperature-wise or spicy, but I did like the price at 3.99. I stopped at a Burger King recently and saw the original chicken sandwich was 5.79!
Maybe i should try Chick fil a again. Thought their chicken was too sweet. Is there a spicy version?

Thanks @NotJrvedivici and @CurlzNJ for the input on LaRosa. I doubt I’ll be heading there any time soon.

I used to get La Rosa in Madison in between Yuki Hama and Radio Shack while I was waiting for my clothes to dry at the laundromat. Then we’d go bowling.

There’s on me in tinting falls as well

As someone whose only real fast food guilty pleasure is the bk original chicken, you can just about always get two and two small fries for 5.99 with an easily found coupon code online or via the Bk app.

Didn’t Burger King use to have the best/worst chicken parm sandwich too? I seem to remember having an addiction to them in my younger years.

There used to be a Crown Chicken in Sayreville at Route 9 and Ernston Road, IIRC.

Have not been for the same reason, and there is one about 5 minutes away from where I live. Never seen any cars in front of it.

In this thread, like so many others regarding new restaurants, I hate to bring in negativity and I do wish all these businesses luck. But in most cases you have to wonder “What are they thinking?” I loved being proved wrong, though.

yes I think they did offer an “Italian” version of the original chicken, but I never had the nerve to try it… I cant imagine it being any good.

Pick up the BK app, they have the best deals out of all of the fast food places.

If you have TMobile or know someone who does, you get free Whoppers on Tuesdays.

For 1$ with the app, you can get: 8 piece nuggets and a kids meal (cheeseburger, fries, cone, and a drink). Also the app lets you add lettuce and onions to the cheeseburger for free!

Oh man I was just thinking today about how much I miss living 2 minutes away from Crown and Kennedy, this is great news!! I hope this one is as good as the Asbury location.