Having a good Yakitori (Japanese Grilled Chicken Skewer) specialist is always a good thing. The individual small skewers of various Chicken parts (e.g., Grilled Chicken Breast, Thigh, Wings, Hearts, Liver, etc.) when grilled properly over Binchotan (Charcoal imported from Japan) imparts a gentle smokiness and pleasant grilled meat savoriness that let’s you while away an evening with family and friends. With the closure of Aburiya Raku, L.A. lost its best, and the void still hasn’t been filled. So when we were reminded of Torigoya, a newish specialist (they’ve been open a few years IIRC), we decided to pay them a visit, hoping this might be another great option for this cuisine. 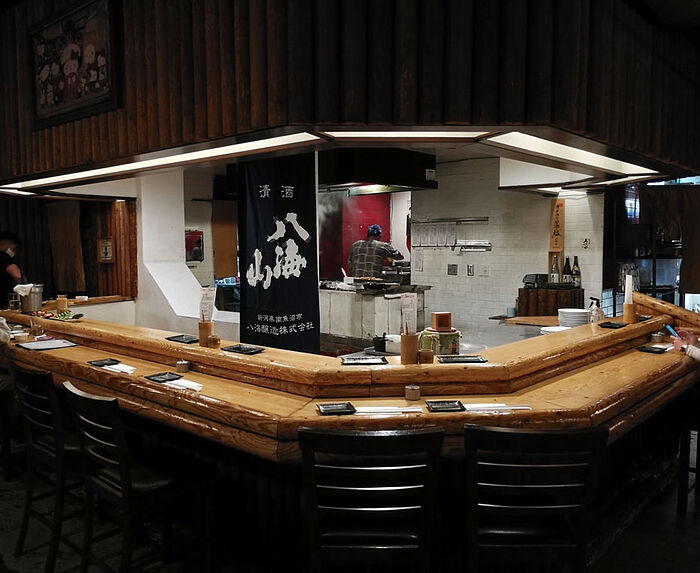 Located inside Weller Court in Little Tokyo (where the old Kinokuniya Bookstore resides), Torigoya had the feel of a Yakitori specialist and the website pictures certainly looked the part as well. Torigoya’s Yakitori Chef is from Chiba. A young fellow, our waitress was new and didn’t know his name(!) and said it was too busy to ask. Regardless, we were excited and couldn’t wait to get started. 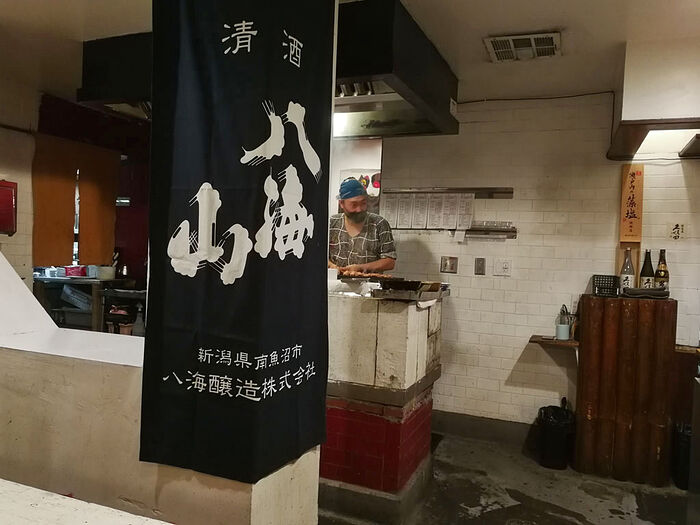 Their Sake menu is almost non-existent and disappointing, with only a few selections that are commonly found in local supermarkets (viz., Kikusui, Hakkaisan Junmai Ginjo, Kubota Senju & Manju).

While you can order skewers individually (which is our preference), they had a 10 Skewer Course that is “Chef’s Choice” and our waitress said was the “best option” (Torigoya would choose the skewer and seasoning for it (Salt or Sauce)), so we decided to give that a try. 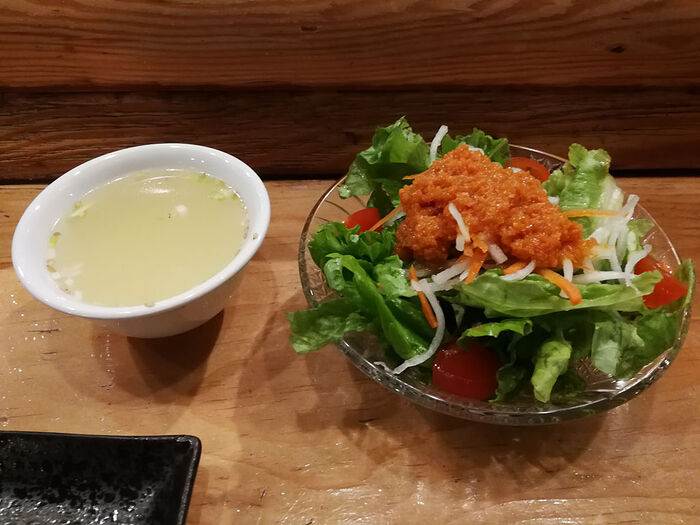 As part of their 10 Skewer Course, their House Salad was fine: Typical Romaine Lettuce, Tomatoes, and the Onion-Ginger Dressing that’s found in many local Japanese Lunch Special meals. The Chicken Soup was a bit thin, but decent in flavor.

The menu offered a few Side Dishes as well, so we chose a couple to try. 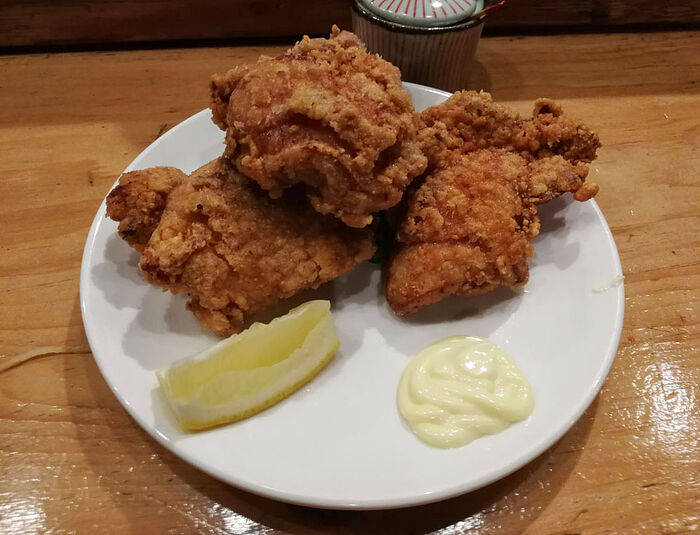 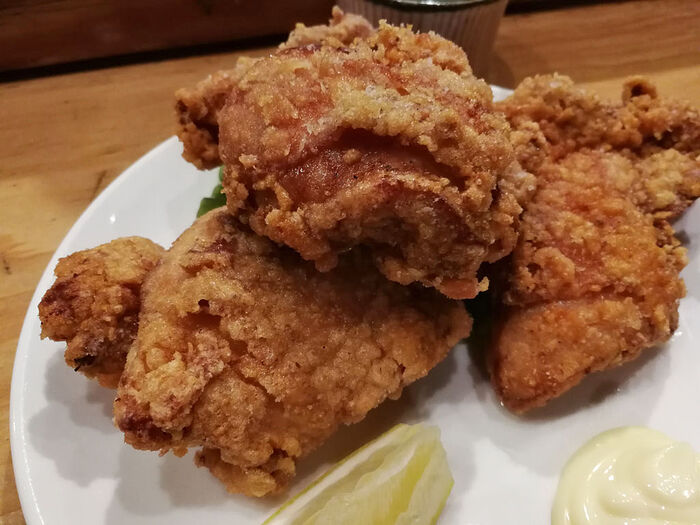 There was a nice golden brown exterior. Taking a bite: It was Raw Chicken inside!

It wasn’t “rare”, it was uncooked Chicken. We showed it to the waitress who immediately apologized and agreed with our assessment saying that “something was wrong.” They ended up making a new batch of Karaage and this time, it was properly cooked through.

Unfortunately, the Chicken meat itself was stringy, a bit chewy in parts, and mainly Salt in flavor. 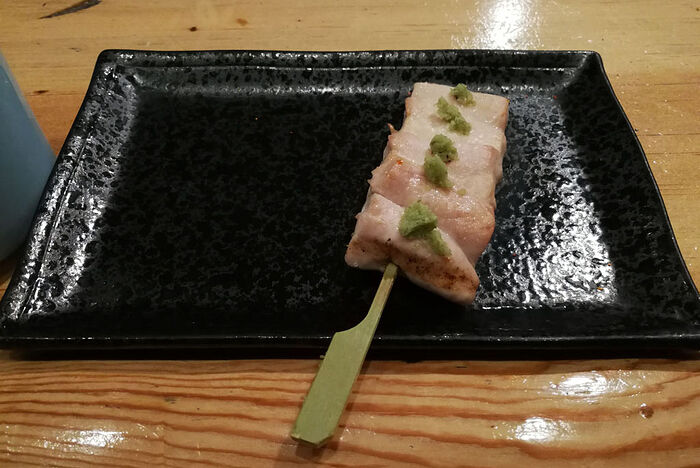 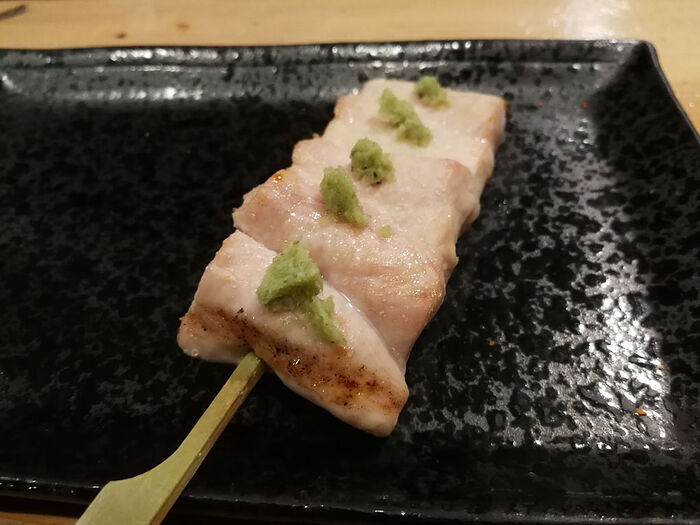 This was OK. There was no smokiness from their grill, the Chicken Breast wasn’t overcooked (great), but flavor-wise, it was mainly just flat (Salt and some Wasabi from the topping). It lacked the depth of flavor of the best versions around town. 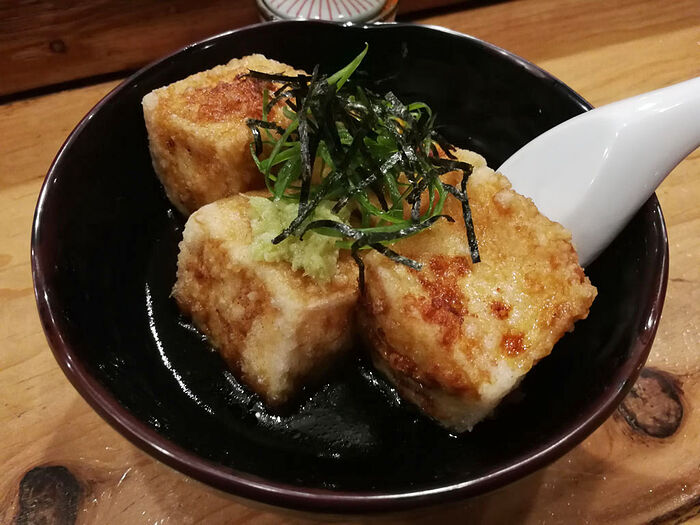 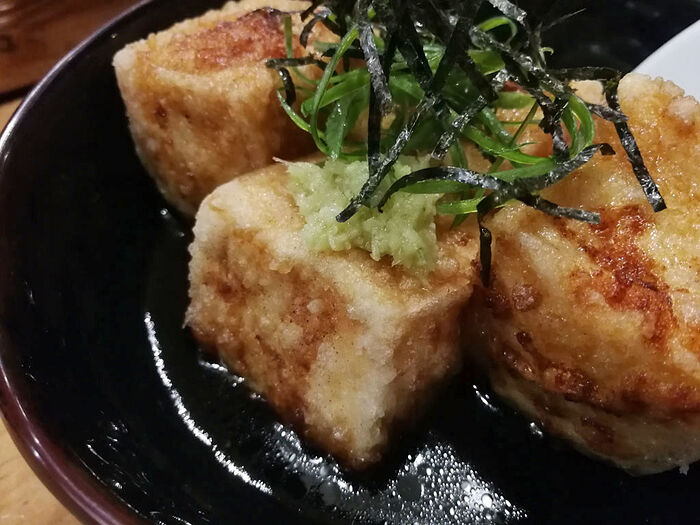 Soggy, their Dashi Shoyu (Soy Sauce-based Broth) tasted mainly of Soy Sauce and was too salty. 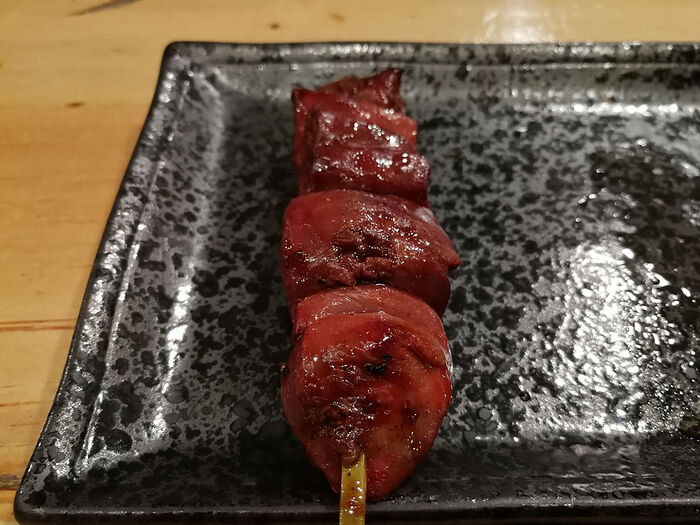 Torigoya decided that their Liver Skewer was best served with Tare (Soy Sauce-based Sauce) seasoning (instead of Shio (Salt)). This was prepared medium rare, so folks who are squeamish about eating bloody Chicken Liver should take note. You can ask them to cook it longer if you prefer.

It was soft, iron-y, but the Tare Sauce was way too sweet. 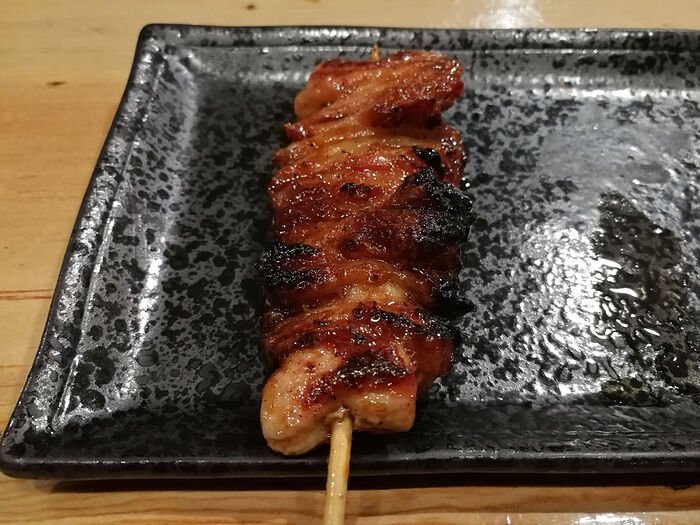 Their Kawa (Grilled Chicken Skin Skewer) was also chosen to be Tare (Sauce) seasoned, a surprise. Unfortunately, this just made it worse: The Skin itself was undercooked in parts (chewy, flabby Skin) and overcooked and burnt in others. This was a warning sign that Torigoya’s young chef lacked experience and skills. The Tare Sauce was the same as before and overly sweet.

One of the worst versions of Kawa we’ve ever had. Avoid. 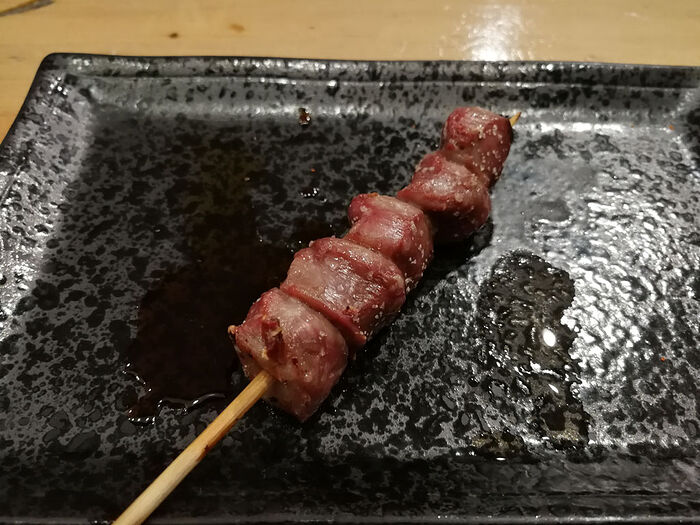 Decent. There was a nice crunch and snap for each piece. A bit overcooked, and the Shio tasted like Morton’s Table Salt (just that bland, intense saltiness). 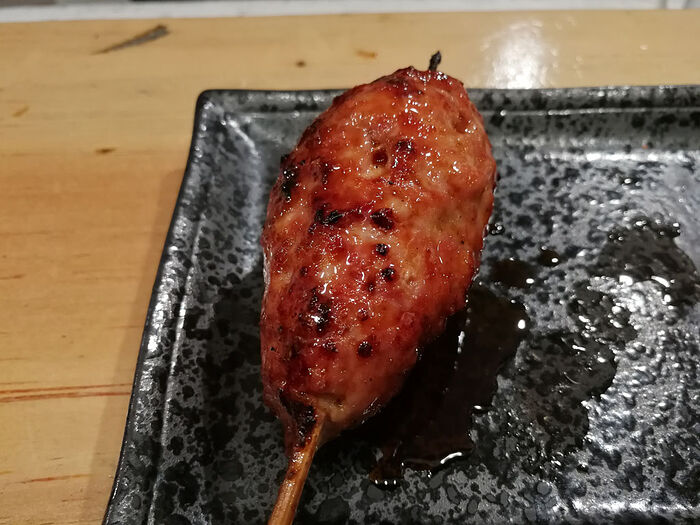 Their Grilled Chicken Meatball Skewer was mediocre: Mainly tasting of Ground Chicken with Salt (nothing interesting in their house recipe), it lacked any depth of flavor that places like Aburiya Raku (with its Shiso Leaf and general marination) or Torihei (excellent complexity and inclusion of chopped up bits of Nankotsu (Cartilage)) excel at. Torigoya’s Tare Sauce once again was cloyingly sweet and gloppy. 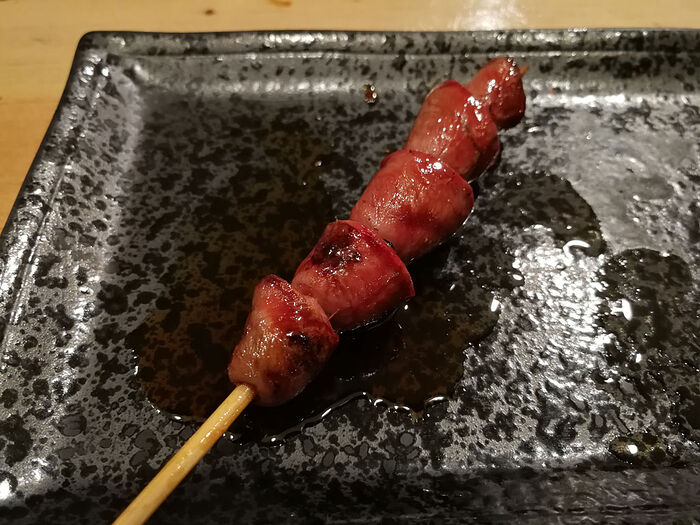 Average. It tasted like they just took Raw Chicken Hearts, grilled it with no seasoning, and dipped it in their overly sweet Tare Sauce. These were a bit overcooked as well. 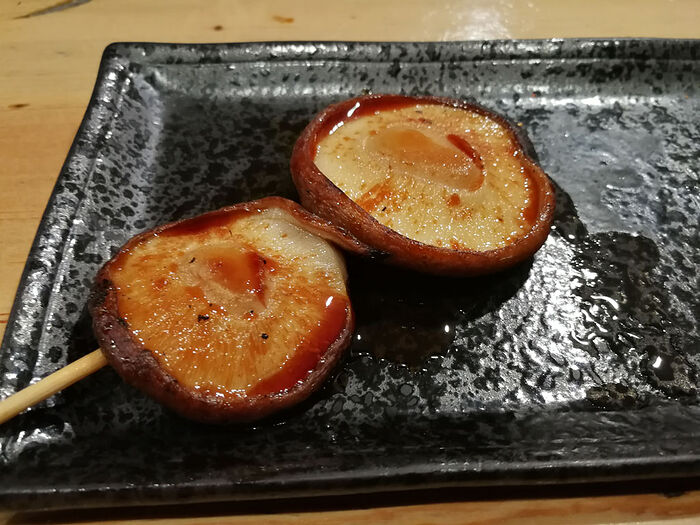 Apparently the Chef really likes their Tare Sauce because the majority of our skewers were chosen to use Tare Sauce. The Shiitake Mushrooms were undercooked, soggy, and lacked any depth of umami from proper Binchotan grilling (at this point with zero smoke, we were convinced they aren’t using imported Japanese White Charcoal that many great Yakitori-ya use). This was the worst Mushroom Skewer we’ve had locally, ever. 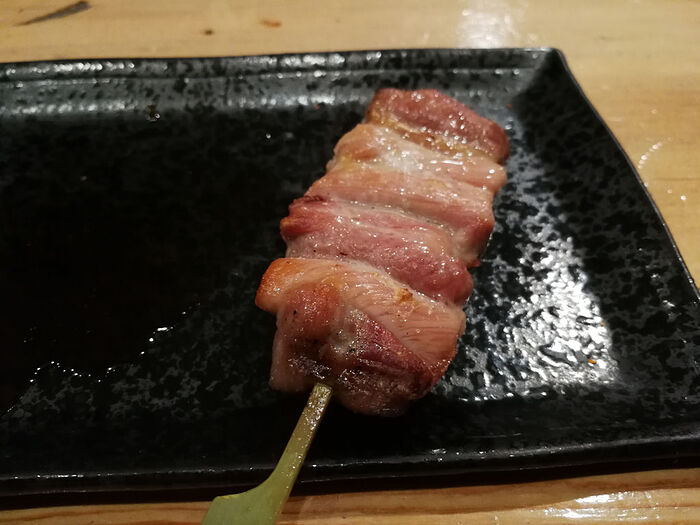 (It should also be noted Torigoya only has Shichimi Togarashi (7 Spice Blend) for a condiment. They don’t even provide Sansho Pepper nor Yuzu Kosho, which other local specialists have.) 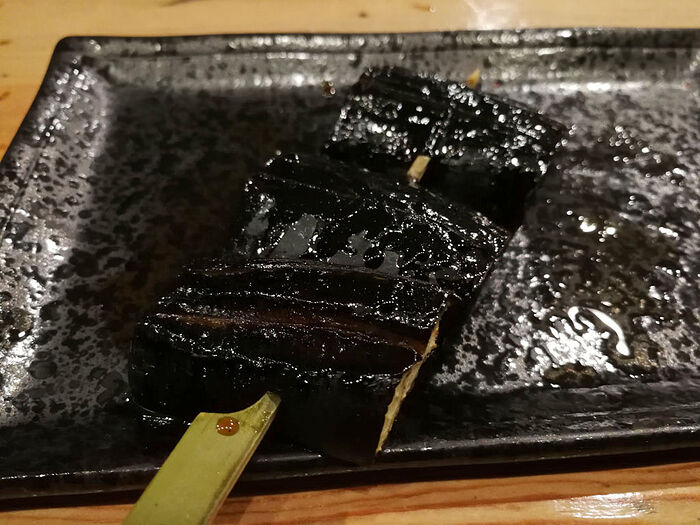 Again showing the lack of experience and skills, their Nasu (Grilled Eggplant) resulted in undercooked Eggplant skin that was chewy and inedible in parts (you had to spit it out / extract it), and a soggy, overly sweet flavor from their excessive Tare Sauce. Zero smokiness as well. Compared to Aburiya Raku’s legendary Eggplant Skewer, or Torihei’s excellent version and Torigoya is just a disaster. 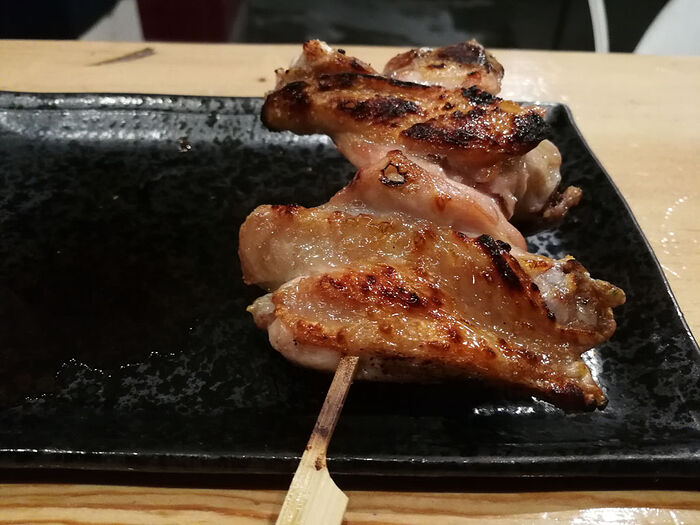 This was fine. It tasted like a Grilled Chicken Wing seasoned with a mediocre Salt.

Torigoya is one of those restaurants that seemingly has the right intentions (wanting to deliver a Yakitori specialty menu; has an approachable website with pretty pictures), but sadly falls far short due to inherent lack of experience and proper grilling skills in the kitchen. Having completely raw, uncooked Chicken in your Karaage (Fried Chicken) plate, having both undercooked and overcooked Kawa (Grilled Chicken Skin) in the same skewer (the inner sections were undercooked, flabby and chewy, while parts of the outer section were burnt black), and flawed skewers for every single course illustrates that disappointing fact.

Add in the complete lack of smokiness, sickly sweet Tare Sauce, flat, generic salinity in their Shio (Salt), no depth of flavor for any of their dishes, and Torigoya is one of those tourist trap restaurants, made for less discerning palates. Avoid.

This is the offspring of Tomo-san’s famous/infamous Kokeekoko.
AFAIK the original team (see Tomo-san below in full regalia) have all departed (so sad, in it’s day that was one fine meal) and it’s not a surprise to hear how bad it has become. 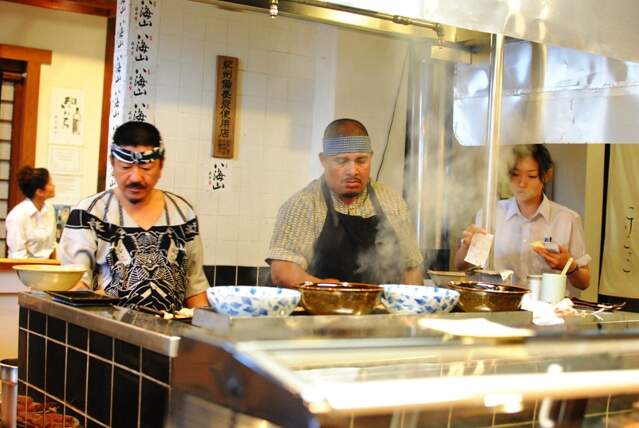 "The restaurant is probably most well-known for the attitude of its head chef/owner, Tomo-san, and his reluctance to serve first-timer or newer patrons off-menu skewers which are “reserved” for the regulars and black plate customers "

I remember hearing about the original place.

@Chowseeker1999: thanks for the warning. Sounds like a pretty bad meal.

I think Torigoya had an ownership change recently (within the last year or so). All of the Japanese food people on IG have been buzzing about Torigoya for the last couple months. This is the first negative report that I have seen. Thank you the review!

Thanks. It was definitely a disappointment. And we went in excited to try it. I would rather eat at Shin Sen Gumi Yakitori (which has been mediocre for a long time, but still acceptable), or even Honda-ya (shudder), over Torigoya.

Hi @Chowseeker1999, thank you for your review! It’s a shame you didn’t have a good meal here, I usually always do. Just wanted to point out a couple of things.

They do have yuzu kosho and sansho (as well as karashi), however you need to ask for it.
Many yakitori chefs have their own style of each specific type of skewer (just like sushi “schools”/genres, i.e. Sho style), the chef at Torigoya uses almost an entire chickens worth of skin for one skewer and folds it onto said skewer like an accordion. This creates a crunchy/charred exterior surface while the inside has a pleasant chew to it with a fatty unctuousness.

Although by your picture it looks like the bincho was either too close to the middle of that skewer or he left it on too long, but just wanted to clarify that style since some shops do that type of texture on purpose and some people love it.

Agreed on their tare situation, however if you do a la carte you get to choose if you want salted or sauced for each skewer you order.

I noticed that if you go on a weekend night, it will no doubt be extremely busy, and therefore the chef won’t have as much attention to detail like he would if it were a quiet weekday.

I recommend giving them another try, and ordering a la carte! Also, order the cold chicken skin in vinegar appetizer, its delicious!