My Lifelong Obsession with the McRib

I’ve never eaten one myself (or wanted to), but I thought this was kind of fun: 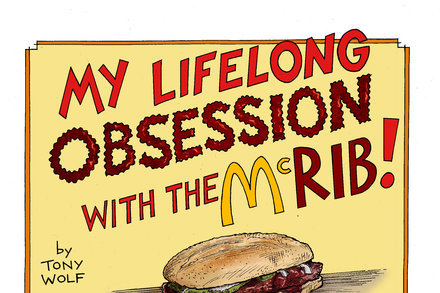 My Lifelong Obsession With the McRib

One man’s dogged pursuit of a McDonald’s specialty sandwich.

My husband could have written this. He LOVES the McRib. I have to say I like it pretty well myself, although I haven’t had one for a LONG time and memory may be playing tricks on me. People who like it really do tend to be superfans, though.

That was a fun read. I know if I rolled up on a MickyDs and I saw it on the menu I would order it. I have had it before and I liked it given what it is.

I have tried it a couple times. I like it, but nowhere near obsession. I like the Filet-o-Fish and Egg McMuffin better.

While I’m certainly not obsessed with them, I do seek them out when they are supposedly available. Unfortunately as the article verified, they have not been anywhere near the NY/NJ area each time they come back. I have searched the web site myself much to my chagrin.

Haha, reminds me of a friend who is equally obsessed. He will seek it out if he knows it’s available anywhere he can get to. He starts getting super excited once any advertisement or promo is visible.

I’ve never had one, and they just don’t look that appealing to me. So what exactly is the deal with this and what did I miss? Now if you had a fried McDonald’s apple pie on you, I would tackle you and take it away from you within 10 seconds of detecting it.

The quest is the goal.
Just to say you participated, like the running of the bulls.

I’ve never had one, and they just don’t look that appealing to me. So what exactly is the deal with this and what did I miss?

Nothing that special, unless you REALLY like McDonald’s BBQ sauce (which is why my husband likes it so much, I think). The meat patty is very tender and its texture/flavor play nicely with the bun and sauce, plus way they dip the meat into the sauce means a good ratio of sauce to meat to bun in each bite and a nice moist sandwich overall.

ETA: I’m with you on the old school fried pies. They were the absolute BEST.

Totally agree with all you said, but what really stands out are the onions and pickles they put on it. To me, that is what makes it. Ask for extra onions and they will do it.

Oh yeah, I like the onions and pickles too. DH is pickles yes, onions no. I agree the tang of the pickle is very important to the flavor balance!

I as much here have never had one, but do know people who have…My son who is 27 , goes to the gym 5 times a week, eats vegan at least twice a week, would drive a 100 miles to find one…they must put something in it that just clicks with some people…perhaps the combination of processed pork, prepared onions, prepared pickles and sugar laden barbecue sauce?

Has anyone seen the ribwich Simpsons episode? Good stuff!