I first learned about California Street Market when a parent brought a bunch of these tamales to a holiday potluck late last year. At the time I quite enjoyed the tamales hurriedly amid the chaos of a potluck with tiny kids in it. Later we inquired where he bought the tamales from and finally made it there this week. I must have driven past this store hundreds of times and never even noticed the giant tamale sign up. A search of the shop and it was mentioned three times in the past, including a writeup from Melanie Wong in Dec 2015 that I had no idea was posted.

The tamales are made by the owner’s daughter daily. They got hot ones behind the counter. We bought cold ones to freeze that the employee brought out from the back along with reheating instructions for the gringos.

Flavorful traditional tamales. We got Pepper and cheese, chicken and tamales. We re-tried the first two so far. Tasty. The one gripe would be the dry chicken breast meat. But the masa was flavorful.

Interesting shop with a giant bakery section (for a tiny grocery shop) with selections from Titas Bakery in San Francisco and a few things from Acme. Anyone tried Titas’ baked goods? 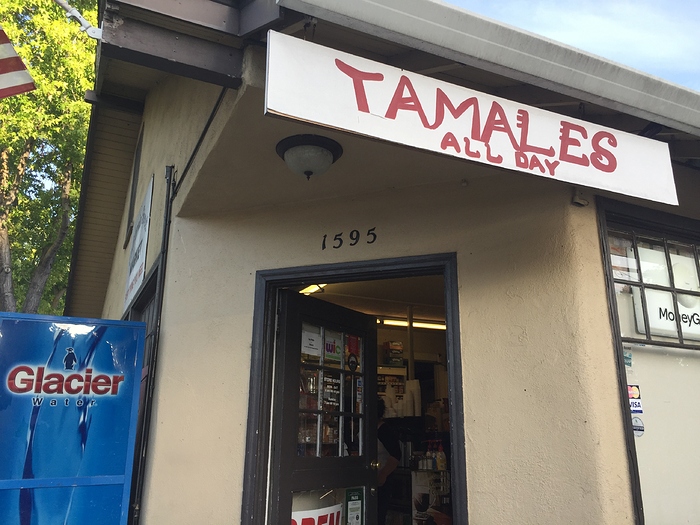 The pork tamale is the winner in my book. A mild infusion of heat from red chili into the pork shoulder meat, combined with the fragrant masa produces a satisfying rendition of a pork tamale. Yum.