Review #3 on our group’s Monterey/Carmel weekend: 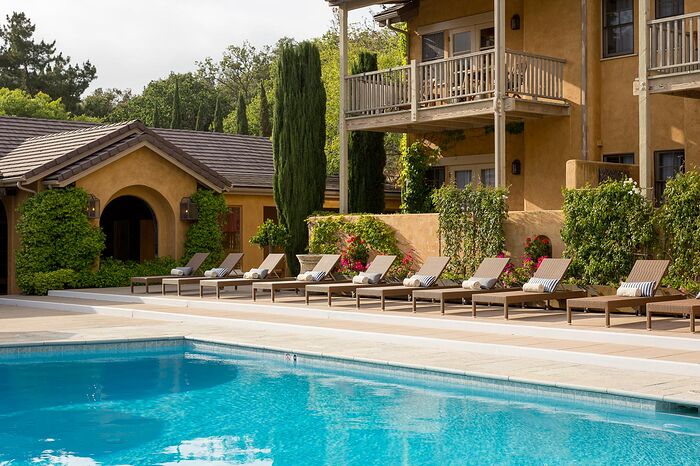 We like to end our Monterey trips by lunching at Lucia. Located some 20 minutes away from Hwy 1 in Carmel Valley, Bernardus is a luxury resort, although no longer affiliated with the winery of the same name, as the owner sold the resort some years back. The best place to eat is outside, but it was a little too chilly for our group. We chose to sit indoors, although some hardy souls were eating outside with propane heat towers. We were seated in the bar area, which has a nice view of the outdoor dining, although I regretted not being able to sit in the dining room, which is a sophisticated and handsome area.

Roasted Beet Salad: garden greens, citrus, walnut vinaigrette, feta cheese, marcona almonds. What a difference from yesterday’s beet salad that Rio Grill, just down the road a couple of miles, which I didn’t bother to finish! The list of ingredients wasn’t much different, but the execution and quality was head and shoulders above Rio’s. Crisp just-harvested baby greens, supremes of citrus (segments cleaned of pith and membranes), quality feta, and a very fine mild vinaigrette made for an exquisite starter.

Cream of Mushroom Soup, drizzled with truffle oil. Spouse loves this soup. His gold standard remains the late chef Andre Lemaire’s silken version, but this came very close. Unlike Pocket restaurant’s heavy hand with the truffle oil in M’s pasta last night, if it wasn’t listed on the menu, a diner might not realize truffle oil was in there. It was subtle and understated, just enough that despite the creaminess, the soup had that “essence of mushroom” flavor that can be so elusive to capture.

Pan Seared King Salmon: citrus-soy glaze, kombu rice, broccolini, foraged mushroom. I remembered to ask for medium rare, and it was cooked beautifully. I love king salmon and the surprisingly large fillet was exceptional, the glaze well-balanced and remaining in the background. There was only a small serving of rice, which went beautifully with the sautéed mushrooms. The serving of broccolini was also generous, and perfectly cooked al dente . It was one of the finest fish entrées I’ve had in some years.

Classic Eggs Benedict: Caggiano ham, Meyer lemon hollandaise. Spouse liked the thin-sliced ham, which were attractively folded on top of the toasted English muffins, rather than being laid flat on top. But he was disappointed in the hollandaise, which usually happens as he’s accustomed to our homemade one, which uses three or four times the amount of Meyer juice.

Special: Seared Ahi tuna. Our friend loves seared ahi but this was a tuna steak, about 1/2" thick, and cooked, not seared. Still, she said it was good – just not what she was expecting.

Bernardus Burger: housemade pickles, pommes frites. C ordered this, and said it was pretty good. I don’t think it matches the burger at Cellar Pub/Benecia or Solbar/Calistoga, however. We should have suggested the fried chicken sandwich, which impressed us on our last trip – except that was almost two years ago, so we weren’t sure it was still good, in view of all the changes caused by the pandemic/lockdown.

Cheesecake. Despite the waitress’ description as “NY style, I think”, this was a soft, creamy, not-very-tall cheesecake, more like a tart. It was not NY style, which we were happy with. We were all amused that the majority of desserts we have ordered on this short trip haven’t matched their descriptions!

Seasonal: Pumpkin Sorbet. M loves pumpkin, so she chose this dessert. It was a bit mild in flavor, but tasty. The serving was generous: three large scoops.

Assorted Warm Cookies C couldn’t resist ordering this plate, but we encountered a timing problem. It was a good thing we weren’t in any hurry, because it simply never showed up. At first I thought perhaps there was a shift change – sometimes orders can “fall through the cracks” when this happens – but I saw our waitress handling some new arrivals, so that wasn’t the cause.

Almost twenty minutes later she came back and apologized, saying the order had been somehow been misplaced, but they were working on it as quickly as possible. C had ordered a steamed milk to go with her MIA cookies, and the waitress brought her another gratis.

Fortunately cookies don’t take long to bake, and in less than five minutes C received a very generous plate of warm, fresh-from-the-oven, full-sized cookies. There were so many she shared them with the table. I don’t know if the kitchen gave her extra cookies due to their error, but she received:

All were soft and very good. To compensate for the long wait, the waitress took this and Spouse’ cheesecake off the bill.

M got a spicy Bloody Mary drink – I didn’t catch the exact name – which she liked very much. Spouse got coffee, which is drip (we’re not fond of French press coffee) and in the metal vacuum pots we would like to see all restaurants use. It keeps the coffee hotter for longer than glass pots.

Summary:
Long-time executive chef Cal Stamenov has recently left Lucia, so I asked the waitress if a replacement had been hired yet. She said they were still interviewing, but the staff was hopeful that management was close to making a decision, having recently conducted final interviews with three candidates.

We have truly enjoyed our lunches at Lucia, but the hiccups we experienced are what happens when the top position is vacant. It’s a measure of how well-trained the staff is at Lucia that the errors were very minor, save for the cookie mistake. We will be keeping an eye on whatever changes are made by the new executive chef.*

Four people, lunch: three starters, four entrées, one dessert (two comped), all beverages were comped, including the cocktail. With tax but without tip, $206

What an amazing review! Not even close to being there, but thank you!