I love momos, and I’ve long envied Queens NY’s “Himalaya Heights” neighborhood and Jeff Orlick’s annual Momo Crawl which last year hit 27 establishments, nearly all of them within walking distance of a single stop on the #7 Metro line.

San Francisco has a long way to go, but we have more places to scarf down some momos than you may know. At last count (the last thanks to @Mr_Happy’s report today) I have 10 on my list:

Are there any more out there to add? (San Francisco only, please. I’m thinking of our own charter tour/crawl).

Cool! I had no idea there were so many in SF. Do you plan to stick to a benchmark variety or sample different filling types?

I’ve noticed that some places make them pleated at the top, like XLB, and other places pleat them sideways, or tael-shaped like potstickers or boiled dumplings. Any story behind those differences, or between Nepali momos and Tibetan momos?

I don’r think there is any particular logic to regional differences other than availability of ingredients.

This was the first place I had momos so called (Jackson Heights NY). They 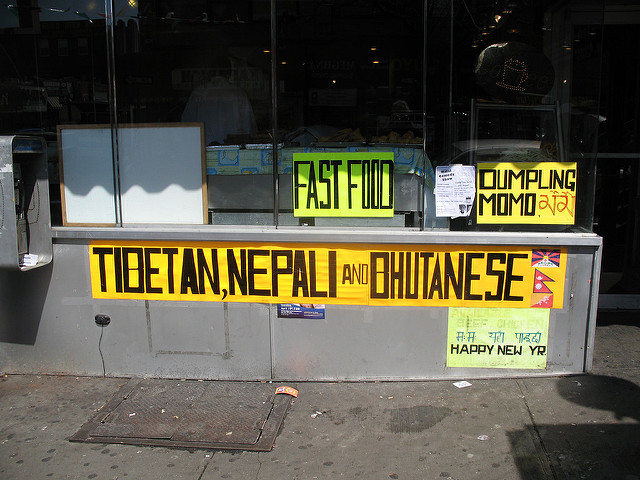 had two choices: chicken or beef.

Little Nepal, and a former chefs new restaurant Cuisine of Nepal aren’t round. Cafe Tibet in Berkeley makes some types round others not

Bini (she’s Nepalese) makes round ones. I had round ones at a Nepalese place in New York (Lali Guras) as well. Chez Gatze (great name!), a Tibetan place in Montreal, serves a mixed momo platter which includes a round one as big as a Cantonese pork bun.

Bini (she’s Nepalese) makes round ones. I had round ones at a Nepalese place in New York (Lali Guras) as well. Chez Gatze (great name!), a Tibetan place in Montreal, serves a mixed momo platter which includes a round one as big as a Cantonese pork bun.

What is that golden thing in the last picture in the below link? If that’s a momo, why is it golden? And that’s surely bigger than a pork bun.

Ah. Did some more searching. Apparently that’s the golden momo trophy for the best momo.

Spice of America just opened in SoMa and has a chicken Momo on the menu.

Thanks. I’ll add it to my list. They bill themselves as Indian and Nepalese, and the momos are crescent shaped, based on Yelp pics. 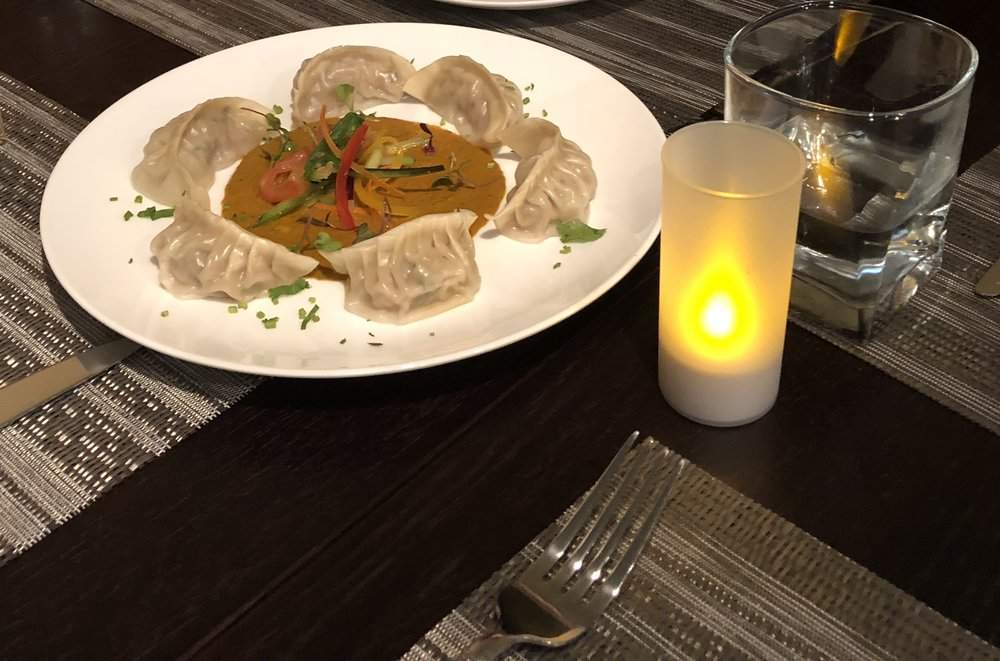 There may be even more, if you believe this search result from Yelp: 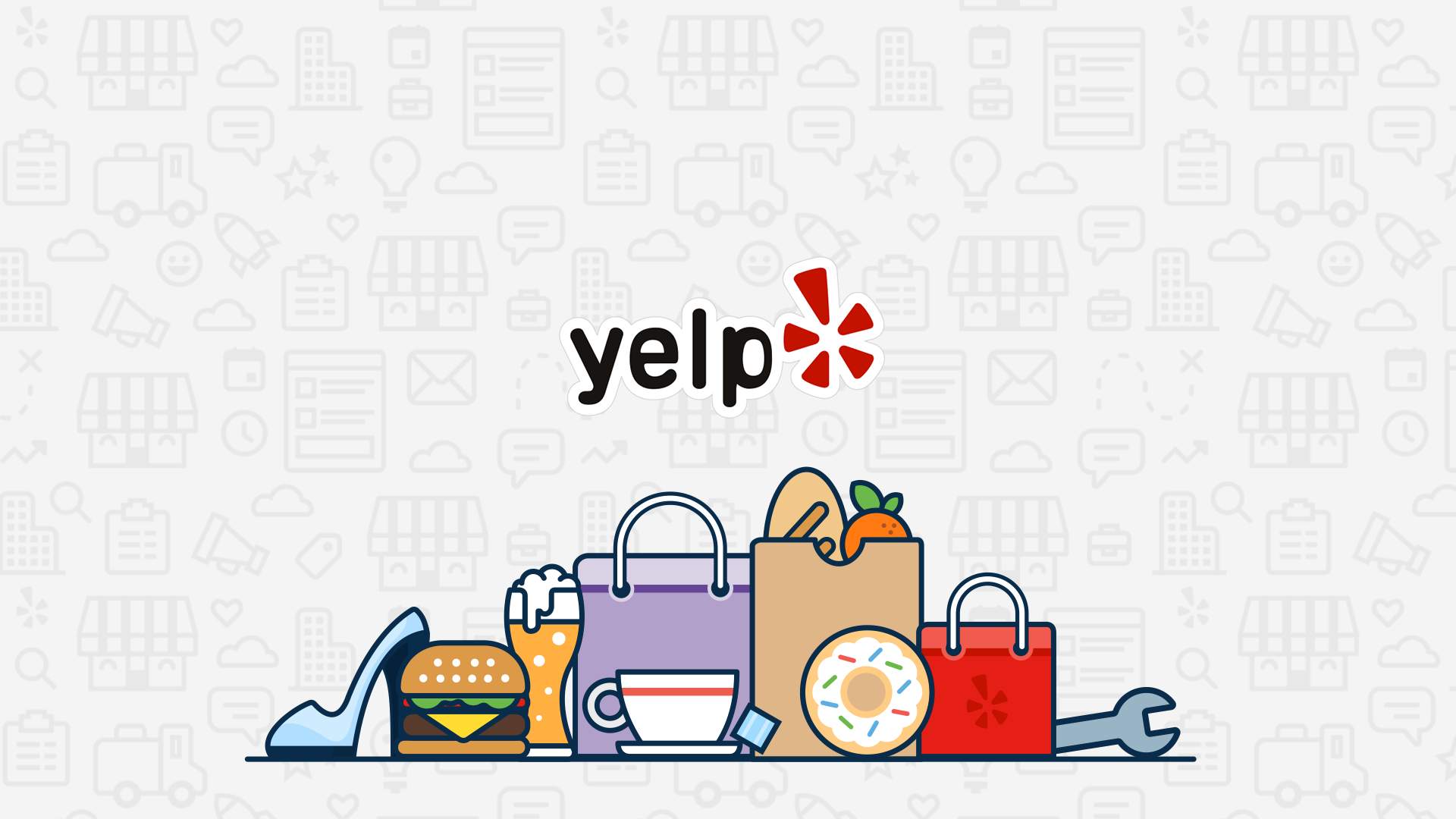 You are right. I’ve added Tara Indian Cuisine, Om Indian Cuisine and Indian Palace. There were some false flags in the Yelp search as well.

I was focused on Himalayan venues, but,as Wikipedia puts it, “Till mid 2000s, momo was only limited among Nepali and Tibetan diaspora in India. However, by 2017, it has spread as one of the popular fast food in the Indian mega-cities.”

I’m pretty sure all the ones I’ve had are made in house, but Given their popularity, I wonder if a few non-Nepali restaurants may have a common supplier. 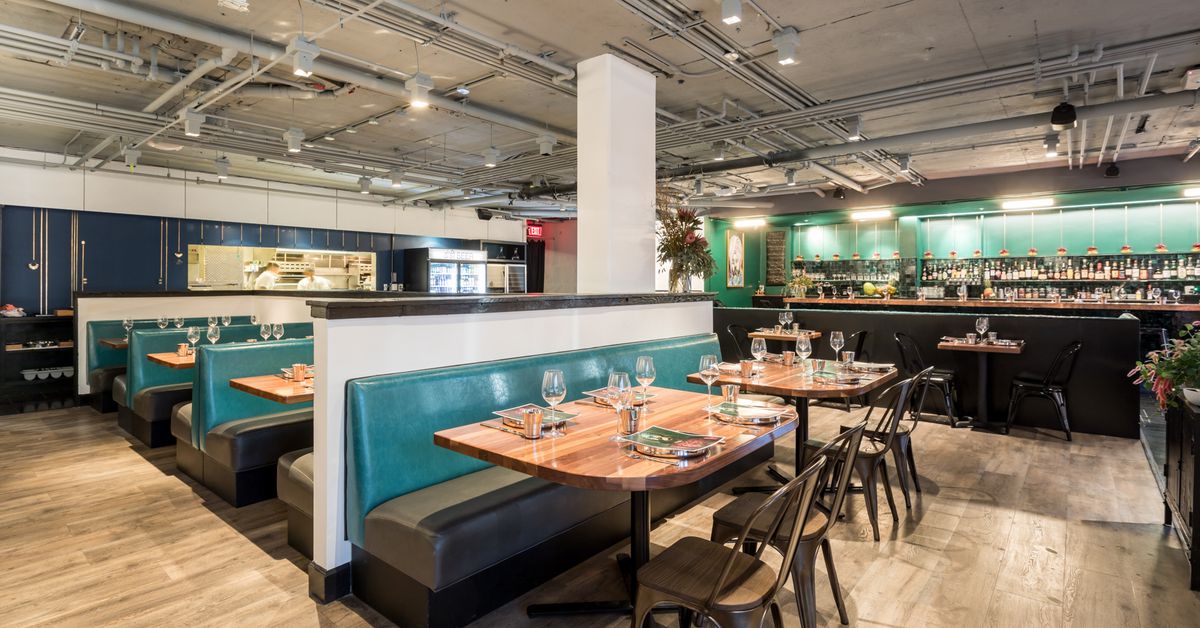 A food truck in FiDi is now serving momos: 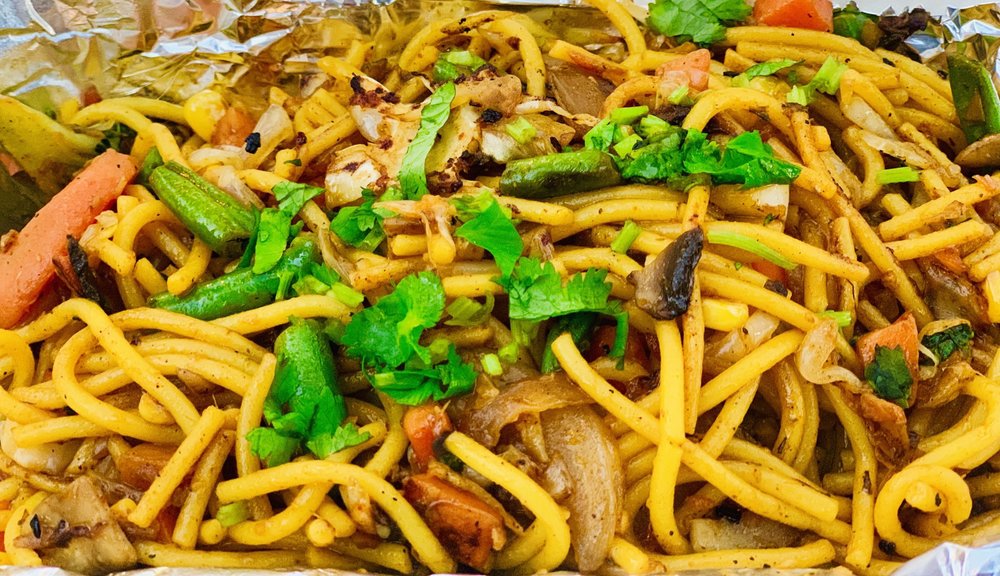 I haven’t had a chance to drop in but when I drove by this morning I saw that Bini’s Kitchen has now opened on Howard at 6th. 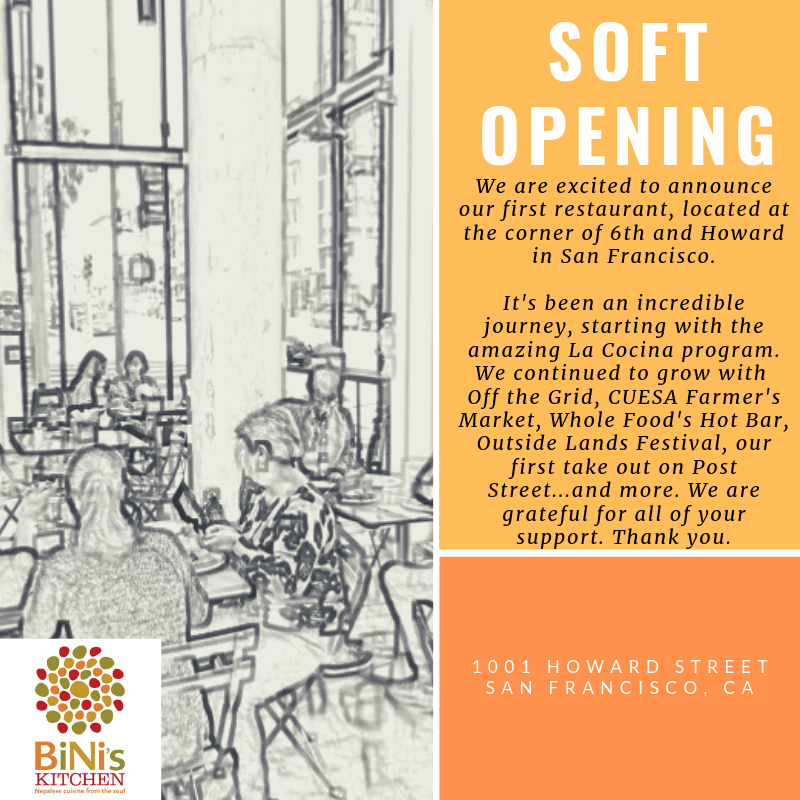 Our first restaurant. Wow! We'll have a Grand Opening soon (stay tuned) but have started serving momos and more at 1001 Howard Street from 11-3 this week. So proud of our team. And forever grateful... 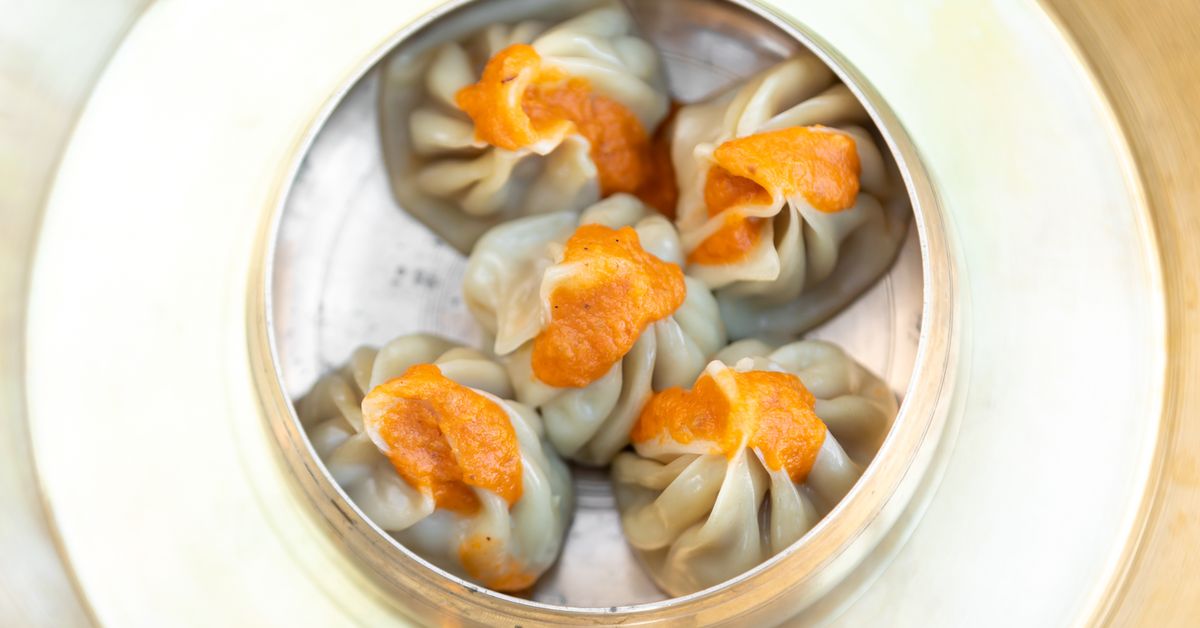 Inside Bini’s Kitchen, a Hard-Won Home for Nepalese Momos and More

A shiny new space for a La Cocina alum 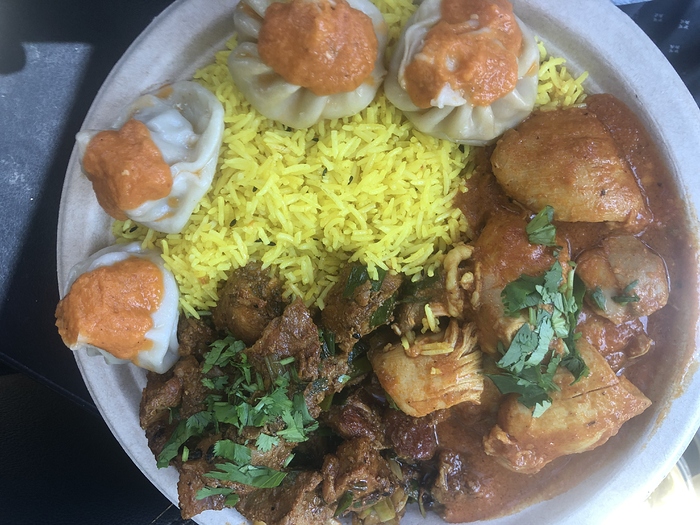 EFD5AD7D-910F-4A2A-BEE2-A2312F500C8A.jpeg4032×3024 2.89 MB
Bini’s Kitchen, Howard Street, SF
2 Ledo Bedo combo plate with chicken Gurkha and pork chhoila, with 2 veggie and 2 turkey momos. Mains had nice building heat and tasted of fresh toasted spices, great rustic/homemade flavor but the pork and chicken were both way overcooked and tough. Veggie momo seemed to have just cabbage in it, turkey is more interesting. Lot of food for $15, I brought about half home for dinner. Forgot to grab some of the homemade chili paste on the tables they warn is super hot.
2 Likes
Help cover Hungry Onion's costs when you shop at Amazon!