Momofuku Seiōbo is a fine dining restaurant located in the Star casino in Sydney. It’s part of chef David Chang’s Momofuku group of restaurants and their first outside of the US. Seiōbo is named after the Queen Mother of the West, whose symbol, like Momofuku’s, is a peach. Seiōbo has two hats in the Sydney Morning Herald Good Food Guide, which is a bit like the Australian version of the Michelin guide.

Momofuku Seiōbo’s executive chef is chef Paul Carmichael, who took over the kitchen in 2015. Chef Carmichael is originally from Barbados and has put a Caribbean touch on the menu at Seiōbo, with items inspired by dishes like Barbadian cou-cou, Puerto Rican mofongo, and Cuban ropa vieja. Their main menu item is a ten course A$185 tasting menu, and there is also a pre-theater menu and a small a la carte menu at the bar.

I had a solo dinner here at the counter, which has a great view of the open kitchen.

To start the meal a large stone pestle was set in front of me. Then came a mortar filled with chicharrónes (fried pork rind) and plantains. A DIY mofongo! I mashed up the plantains and pork rinds. This was served with a cup of a nice collagen rich pork broth that also had a bit of smoked pork fat mixed in. The broth was very porky. 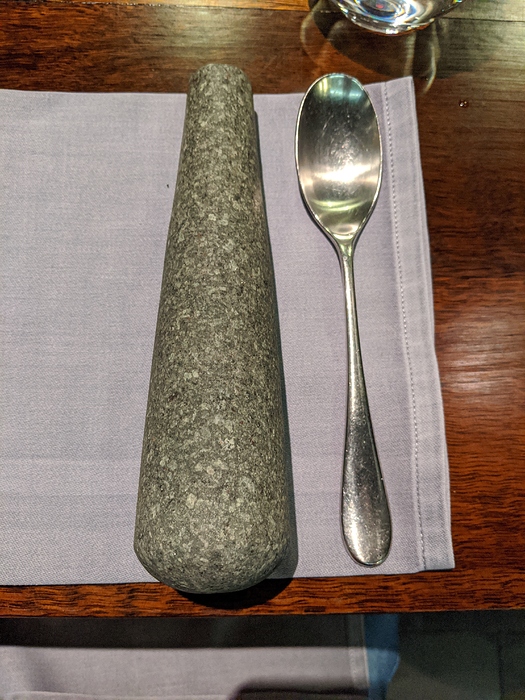 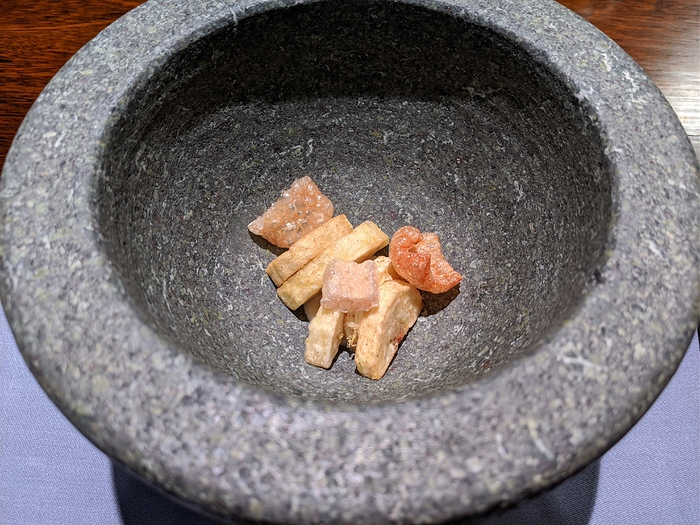 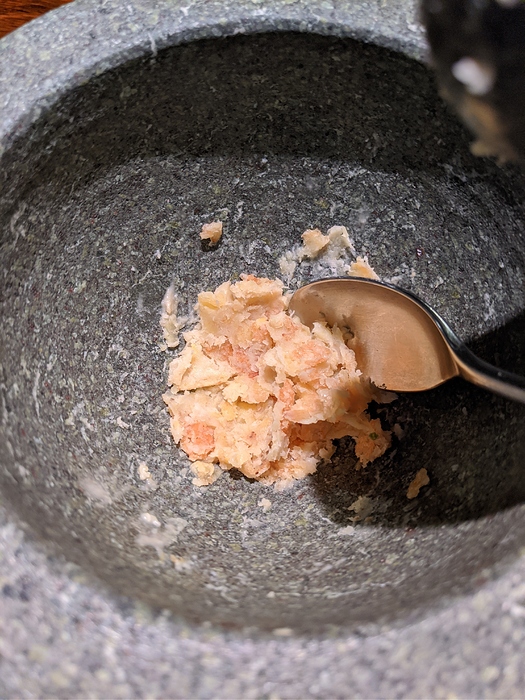 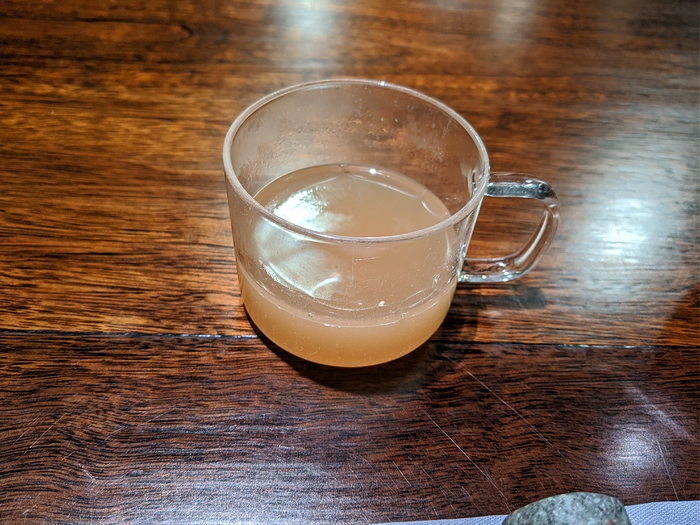 Cou cou is the national dish of Barbados, traditionally prepared with corn meal and okra. This was a fine-dining take on cou cou, with a polenta and okra dollop sitting on a sweet corn sauce and topped with some caviar (which maybe stood in for the fish usually served with it?). Delicious, sweet and rich. 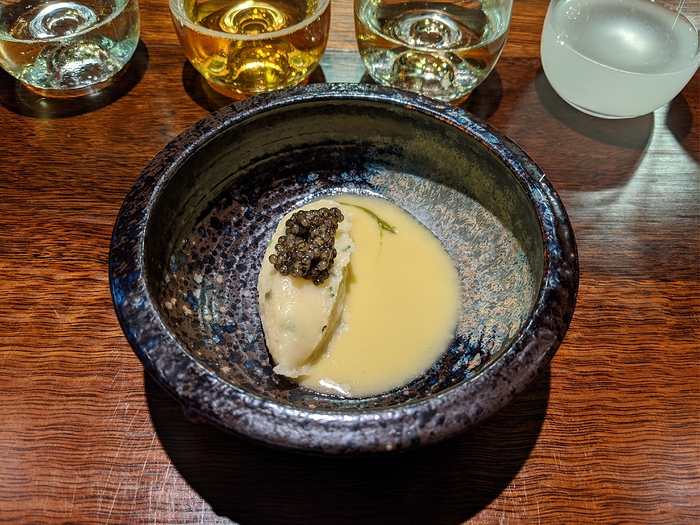 A banana (?) crisp topped with some raw tuna I think and sprinkled with some salty mullet roe. A tasty little bite. 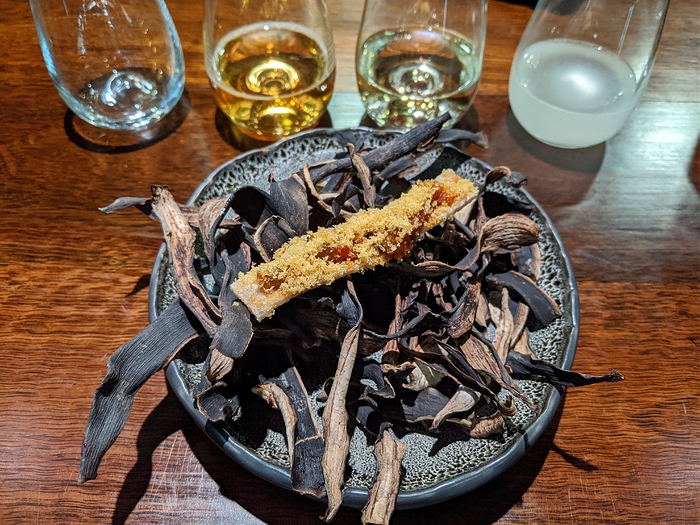 I looked up the dish rundown or rondón and found that it is a Jamaican stew with coconut that maybe kind of like this dish. Smoked eel, cooked down coconut cream, and shredded coconut. Very good - sweet, smoky, and savory. 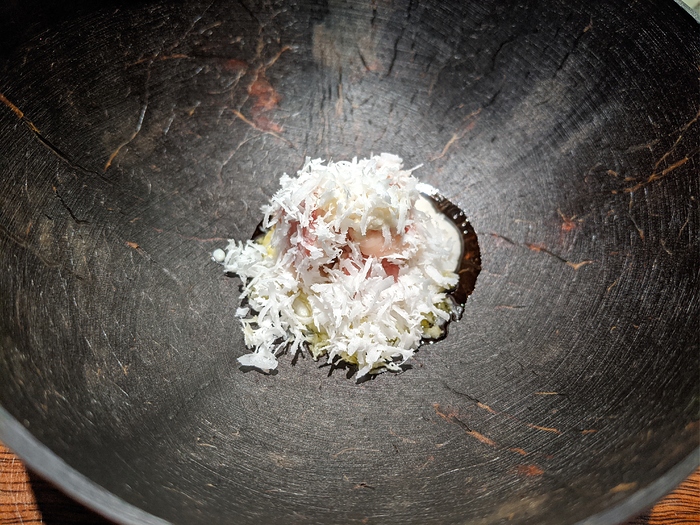 A ducana is a sweet potato dumpling from the cuisine of several Carribean islands. Delicious! Creamy starchy dumpling with crispy savory oniony bits on top which I guess is the “Caribbean x.o. sauce.” 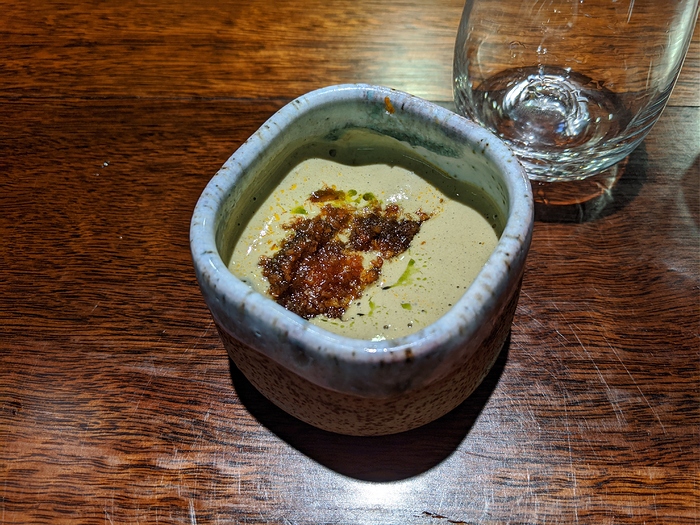 A delicious ceviche. Not very acidic with nicely semi cooked prawns. Pique is a Puerto Rican hot sauce that gave it a little heat. 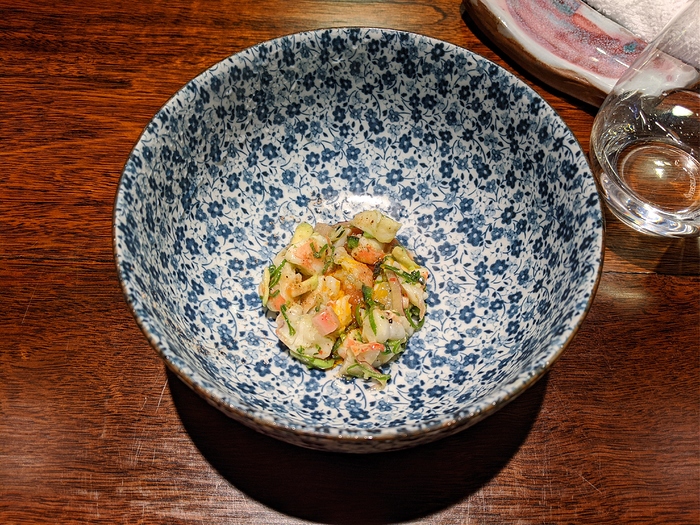 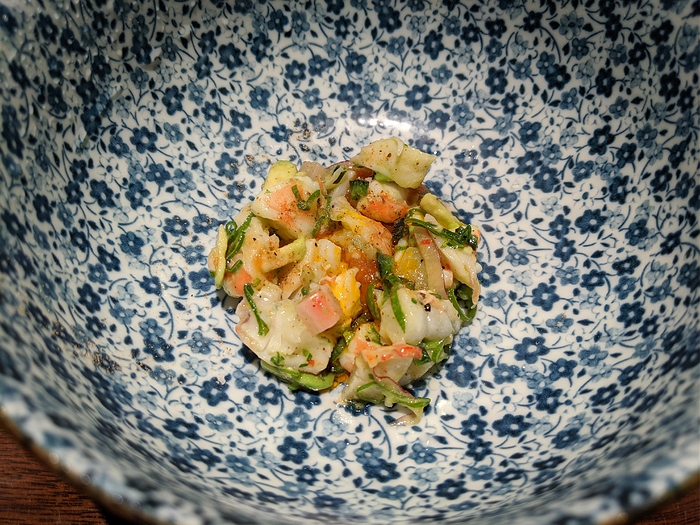 This was a curry crab fried rice, made with spanner and coral crab meat with the curry sauce on the side to mix in. Topped with a few fried curry leaves. Great! The rich curry wasn’t too spicy. I think there was some coconut milk in there. Nicely cooked crab and well seasoned rice. Could have eaten a whole bowl of this. 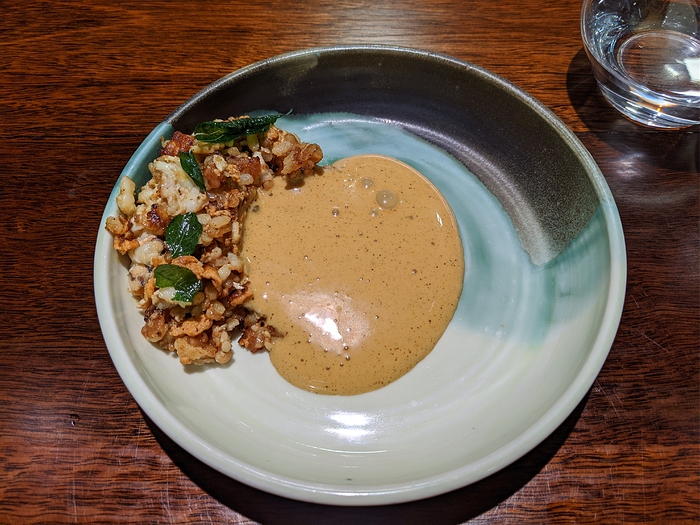 Ropa vieja, “old clothes” in Spanish, is a Cuban dish of slow cooked beef. I haven’t had that many ropa viejas but this was the best one I’ve had. Tender falling apart brisket in a rich broth. Also in the bowl was what was called pasteles on the menu. I forget what it was made of but it was steamed and topped with trout roe. 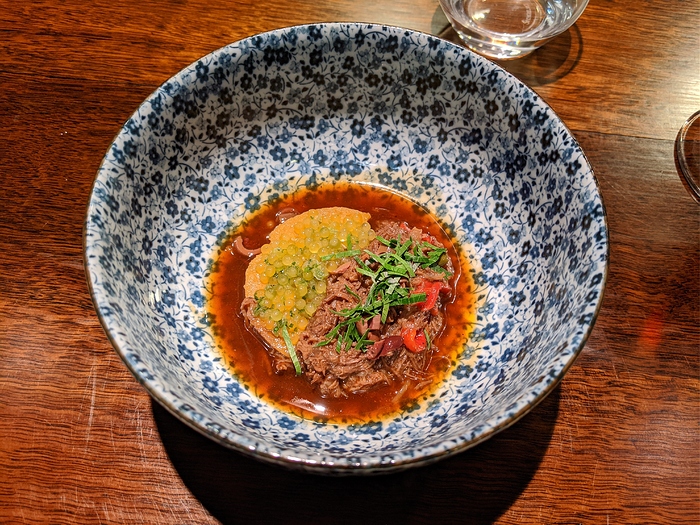 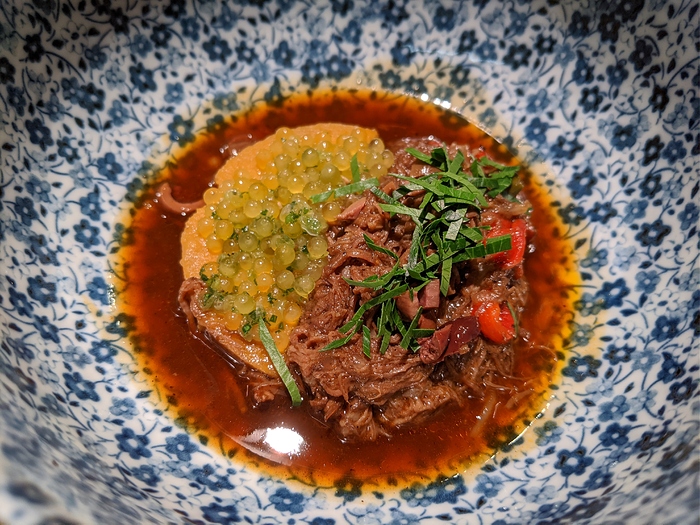 The last savory dish of the meal was a marron, which is a large Australian crawfish, quite a bit larger than the ones you find in the US. This was grilled on charcoal. Delicious! Sweet meat that was a bit like a little lobster. Some smokiness and char on the shell from the charcoal grill. It was covered with a nice somewhat spicy sofrito sauce. It was served with a "coconut bake” which was a warm freshly fried frybread that resembled an Indian bhatura a bit. Great for mopping up the sofrito sauce. A hot towel was provided for cleaning up. 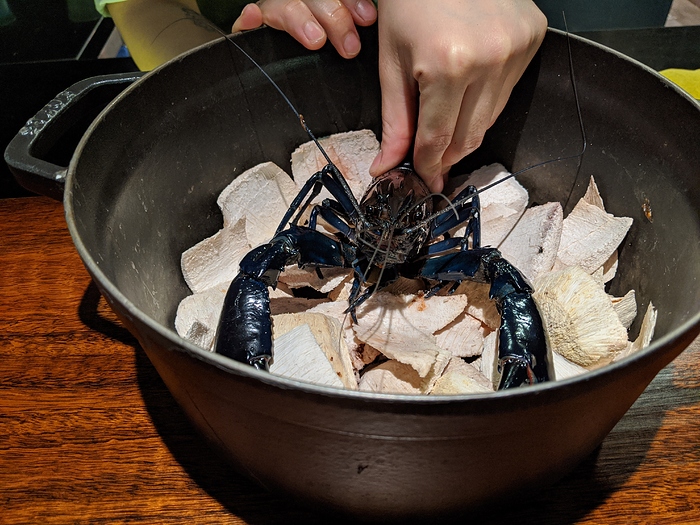 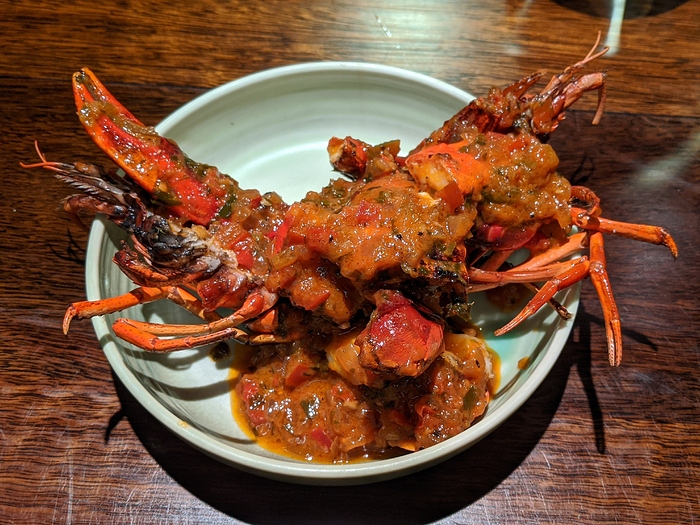 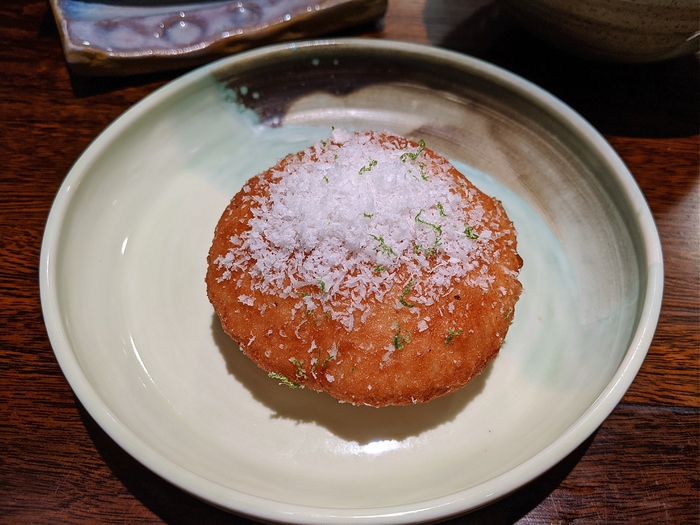 The first dessert consisted of shaved ice, sago, a lime mousse I think, and some passionfruit. Rapadura is an unrefined cane sugar - I think that is what is shaved on top. I was instructed to mix it all up. Nice and refreshing and a little tart and tangy. 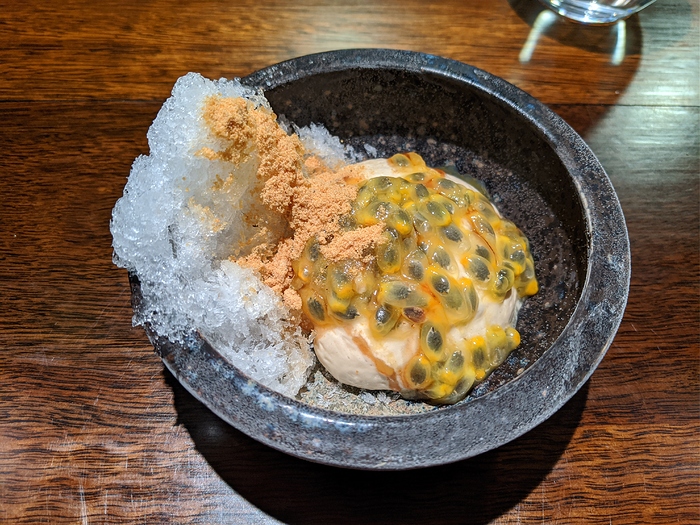 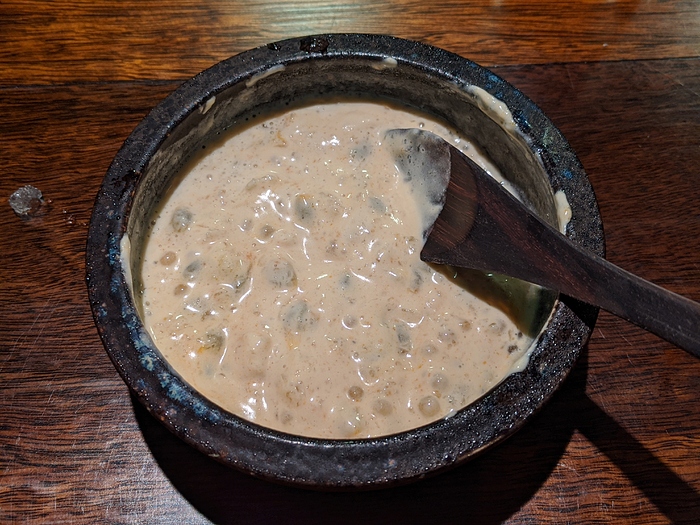 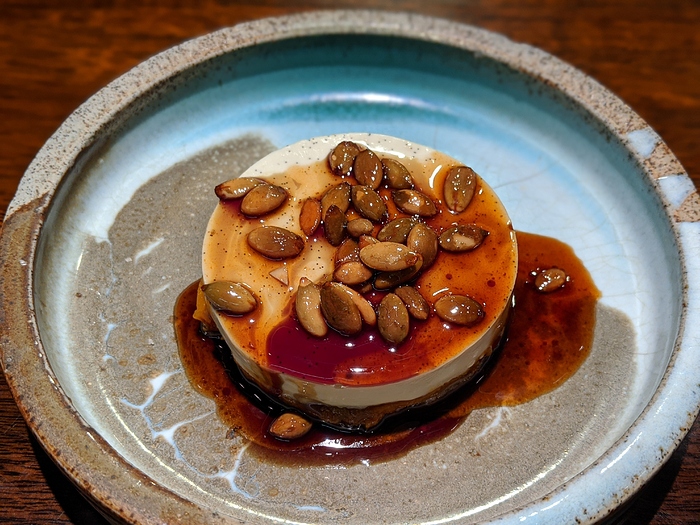 Third dessert! On the left, a rum soaked cake that had been aged a bit. Could definitely taste the aging. In the middle, a Guinness cake, and on the right, a cake that was made with cassava, which gave it a chewier consistency. Nice little bites. 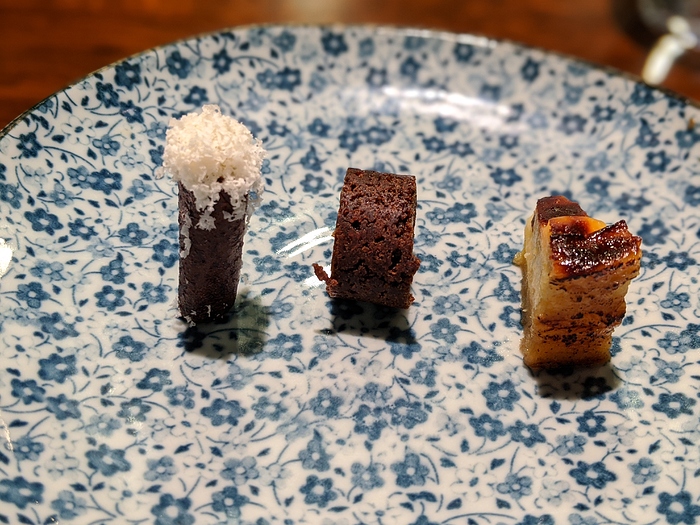 Overall this was an excellent meal. Highlights were the marron, the crab curry fried rice, the ducana, the cou cou, actually everything was very good. Lots of dishes and flavors that were new to me. Makes me want to seek out the source dishes that inspired them. Also, for me it was just the right amount of food. For $180 AUD including tax, which at current time is around $126 USD for the tasting menu, also pretty reasonably priced, though I guess compared to SF prices most things are reasonably priced. Highly recommended. 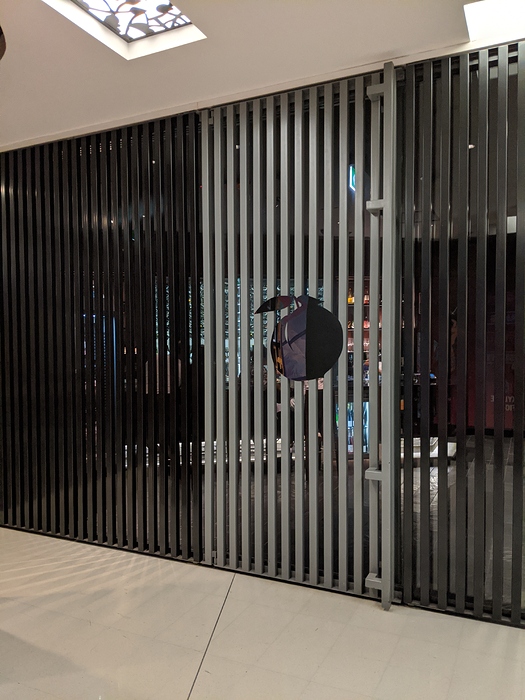 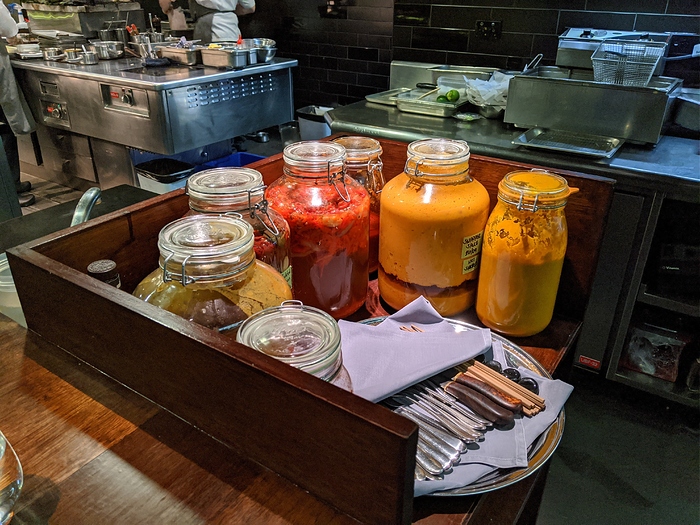 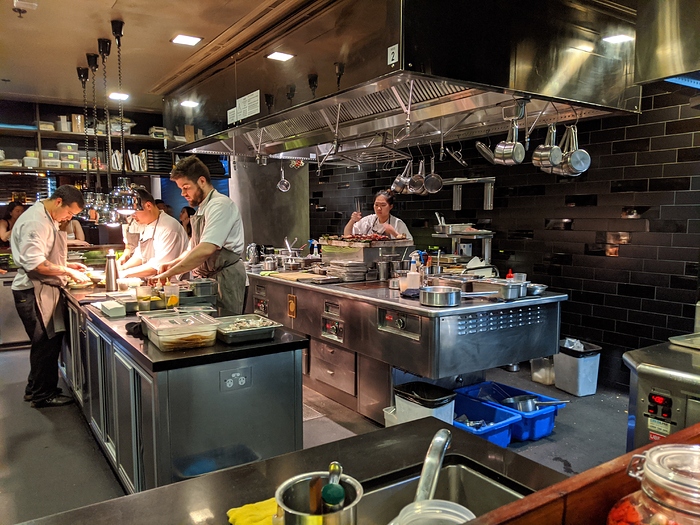 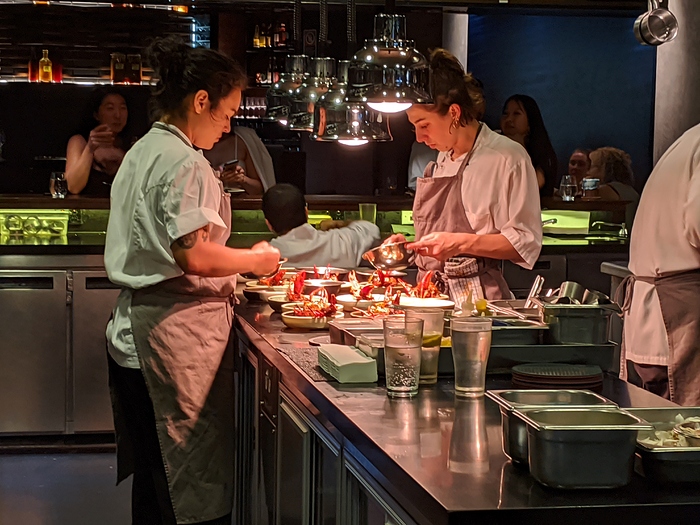