Tonight was the fourth time I’ve been there. First two times I went with friends and got wings and pizza and thought the place was fine. Decent atmosphere, cozy dining room, and I thought their pizzas were as good as some of the pizzerias in this area. Last time I went, I had some very average fish tacos and Justin had a burger which was so deplorable it should never have left the kitchen. We also had nachos that were reminiscent of what you would get in a school cafeteria. It left a sour taste in my mouth and made me never want to go back.

Now, for some reason, my mom loves this place. She wanted to take us out tonight and suggested MJ’s. I didn’t have it in me to say how I feel, so I went along.

Appetizer was good. A trio of dips for $8.99: hummus, some kind of cilantro/olive oil blend, and what was actually an excellent spicy buffalo feta cheese spread-- I really enjoyed that. 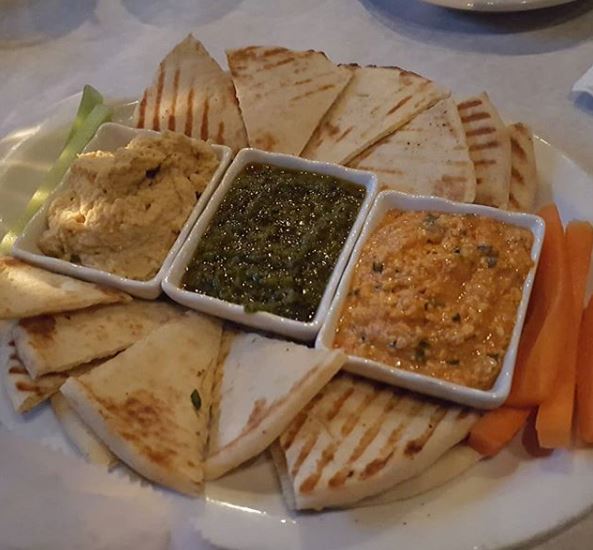 For my meal, I was bold. I got the open-faced turkey sandwich. Had prime rib last night at a wedding reception and having chicken tomorrow. Turkey seemed like a good option. It arrived and the portion was massive. Texas Toast on the bottom, a nice pile of fresh hot and tender turkey, some really good garlic mashed potatoes. Cranberry sauce was canned but whatever. But then there’s the gravy. It was weird. Just plain weird and funky. It was darker than turkey gravy and lighter than beef. There was something about it I couldn’t pin. I made my mom try it and she says, “Hmmm there’s some kind of spice in that”. That’s when it dawned on me. I took another bite and realized there was actually cinnamon in this gravy! Cinnamon! Did they pumpkin spice my turkey sandwich??? 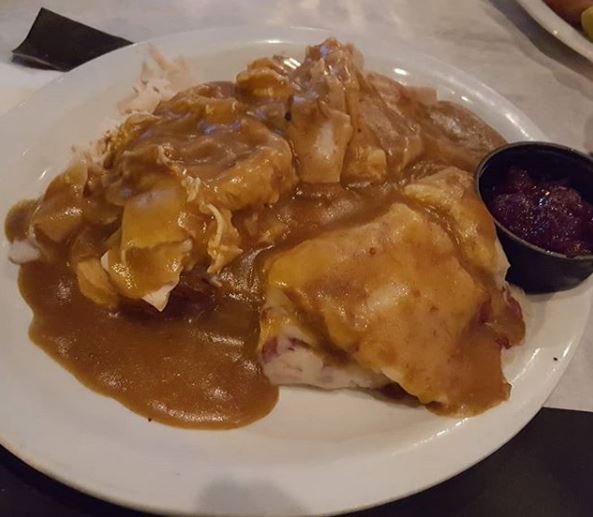 That’s when my stomach turned and I stopped eating. I felt disgusted for some reason. As the minutes ticked, I watched the gravy gloss over and turn to slime. Meanwhile, Justin’s everything-on-it pizza was bland and my mom’s steak sandwich was so rubbery I could have given it to the Rangers to shoot around with. I originally reviewed them at a 3.5 out of 5 stars. That would drop astronomically if I had to do it over again.

We have eaten at the Middletown location and the Matawan location exactly once each. I am in zero hurry to return. The food was borderline inedible both times unless it was for drinks only.

It’s a fun, local place to grab drinks and bar food with friends. Like you, I went there once just for food.

I live a stone’s throw from the original Tinton Falls location, I swore off the brand within 6 mos. of their first location. I have not been back, nor could you pay me to visit any of their other locations. Not only was the food horrible, but the following is an actual event that took place there on more than one occasion, after witnessing this not once, but twice and nothing really being done about it I was done.

They used to do a very fun and lively karaoke night. Not that I’m a fan or participant in karaoke, but I do enjoy watching people humiliate themselves and am astonished at how some “wall flowers” come alive at the mic, you just never know what to expect. (My son on the other hand loves karaoke and he is completely humiliating himself, and he loves it) Anyway, there was a man who would come in dressed in drag, as Lady Gaga, he also hired off duty police to act as his/her body guards. It was funny he put on a show and he similar to my son seemed to truly enjoy the self degradation of sucking at karaoke while yet being entertaining at the same time.

The problem arose (pun somewhat intended) was when he would sit at a bar stool not facing the bar, he wasn’t wearing any underwear and was wearing a short skirt. He would sit there and expose himself, and after being told the first time, I witnessed him doing it again during a subsequent visit. The fact they let him back, and allowed the behavior to continue again, pissed me off to the point I can never support the brand again. I spoke to his “bodyguards” and they acknowledged that he does get into "trouble’ and they are truly paid for their protection services vs. aesthetics of being body guards. They said he was a wealthy dentist (I believe) from the area and he made his rounds doing this sort of thing, not my cup of tea, slice of pizza or enough alcohol for me to find that appropriate.

What did I just read?! I don’t blame you for a second for not returning. It gives me another reason not to return either.

Swear to God on my children it happened exactly as I described. The first time I shrugged it off, hey “stuff happens” . When it happened again in a week or two later, and they didn’t throw him out right there and then, I asked for my check and haven’t been back.

FYI this was at the TF location, and at the time it was the only MJ’s so both Angelo and Rob here usually there at that time. (I would go to the bar fairly often due to it’s close proximity to my home, so I knew everyone there rather well at the time)

have been to TF location a few times, pre Woodys opening, both times at behest of inlays who think Dublin House is a great culinary experience and who lament the closing of the bertuccis by Costco in Hazlet. Its rough when Dublin House has far superior culinary offering than this joint.

Pizza on special was decent and the drink was ok, service was pretty good; thus ends the positives. Inside the location felt dirty/dingy and parking was crummy for how big the lot is; heaven help the people that go there for discount sushi. Woodys has to be killing that location, I know they probably compete at different price points but still people have a choice now.

I guess we should be surprised/astonished they have 4 location now putting go drek on a plate but the VJ theory proves correct again: mediocre (to bad) food + liquor license= $$$$$. I just don’t get how this place is doing so well that they have so many locations; surely there are other casual places that sell booze and have decent food, don’t people care at all? I guess McCloone’s $$$$ should prob tell me otherwise.

Just remember to stay away from the Nuts, the nuts, and the NUTS at the bar I guess.

That’s 6 I know of and trust me I’m not trying to keep track.

Went once by mistake, and then found out that I had made a bigger mistake eating there.

It’s the only one I’ve been to (against my will for a group holiday dinner) and it was not too bad except for the food, service, decor, cleanliness and menu which all sucked.

I’ve been once to the Middletown place years ago. I never went back.

Hey Seal by chance you a lady Gaga fan, I knew you reminded me of someone…

Well, I do love me some karaoke …

Speaking of that - we should get a big group to get a private karaoke and food and drink room at Roosterspin in New Brunswick.

The one in Bayville is the hottest joint down there after martels lol. There are not too many restaurants in that town.

food, service, decor, cleanliness and menu which all sucked.

How was the parking and restrooms?

The parking lot was just fine, the highlight of the evening. I didn’t reconnoiter the restroom as I don’t usually travel with my hazmat gear. (Well maybe if we were doing an MJ’s tour to separate the bad from the worse)

I just made a trip to Rite Aid in Spotswood which is next to an MJs. I went once or twice when it first opened a few years ago. I don’t remember it being particularly bad, but I haven’t even thought about going back. There’s better options in the area, even some of the chains at the mall.

There’s better options in the area, even some of the chains at the mall.

No joke. Ruby Tuesday now has $4 all day drink specials including select beer, wine, and well cocktails. I’d say their food is no worse than MJ’s.

I remember I was at ruby Tuesdays for some reason years ago and I had a sirloin. It was actually pretty good! I remember that I was really surprised but again, this was probably 4 years ago or so. Things could be a lot different now.