I took my visiting daughter to Mr. Jiu’s for dinner last night. I found it enjoyable despite its being in a zone I’m not yet comfortable with (“elevated” ethnic cuisine), and not outrageously expensive, given its celebrity.

Apologies for the darkness of the pictures; we were seated in an area so dark I had to use my camera’s flashlight to read the menu.

I’m not much of a leafy greens guy (give me a wedge of iceberg lettuce and a bottle of Bolthouse Farms dressing) so my daughter, who ordered it, ate most of the Mustard Green salad. I had fun, though, foraging for its hidden treasures (spiced walnuts, jujubes, Asian Pear coins) and the dressing was good enough to lick off the plate. 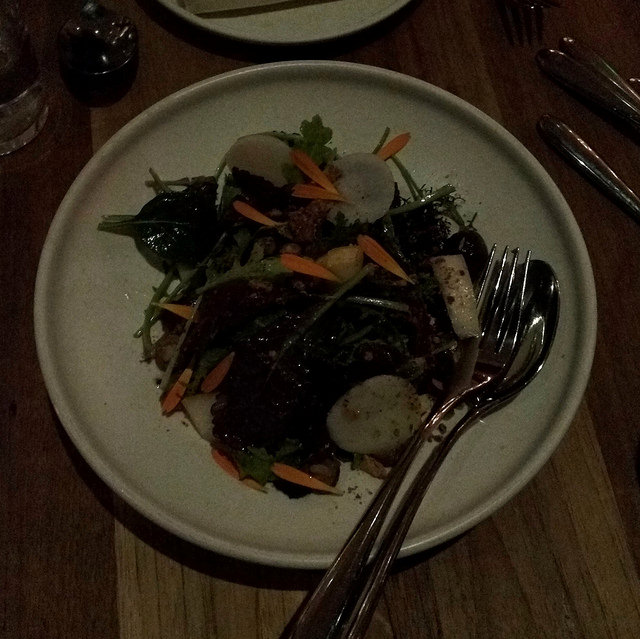 The Dutch Crunch BBQ Pork Buns were something of a letdown, mostly on account of their size (barely bigger than golf balls) and considering that they are probably the most recommended item on the menu. The pork filling was excellent, but there was nothing revelatory about the shell. I think I preferred the haute pork buns at China Live. 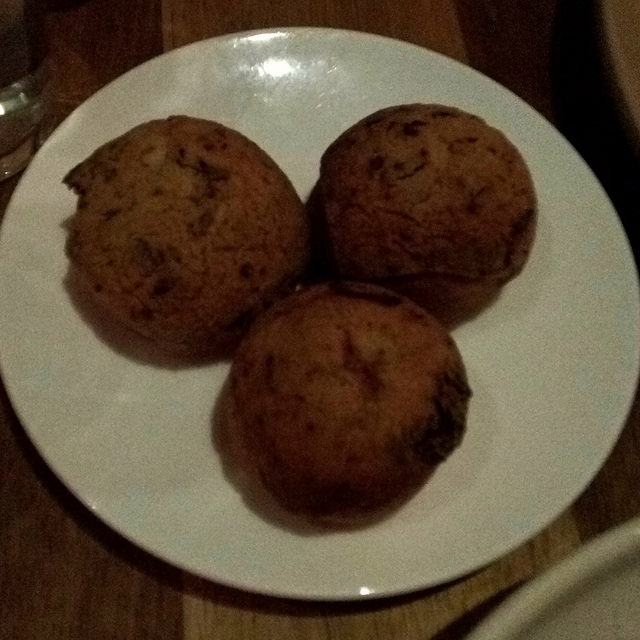 The Sourdough Scallion Pancake was a rather eccentric riff on scallion pancakes, being literally a leavened “cake.” It was tasty enough, but I didn’t like the gummy texture, a bit like a beignet, (which I also dislike). It came with a tangy, sticky dipping sauce and crispy deep fried onions which cleverly stuck to the sticky sauce but only offered partial remediation for the gummy texture of the bing. 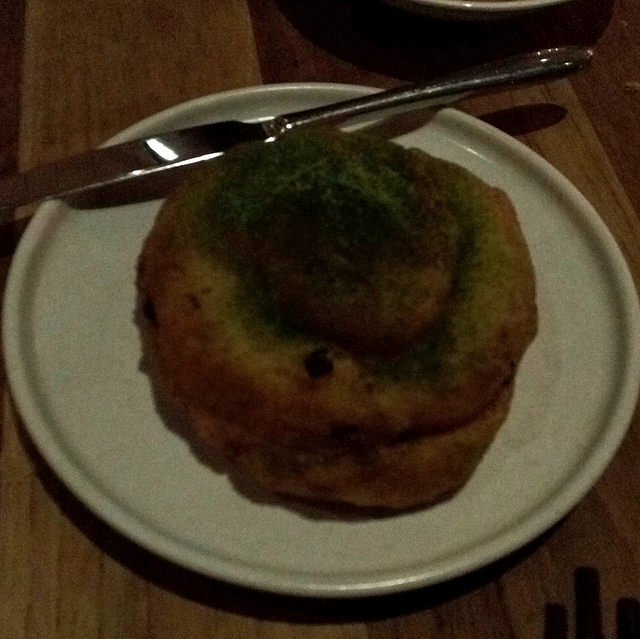 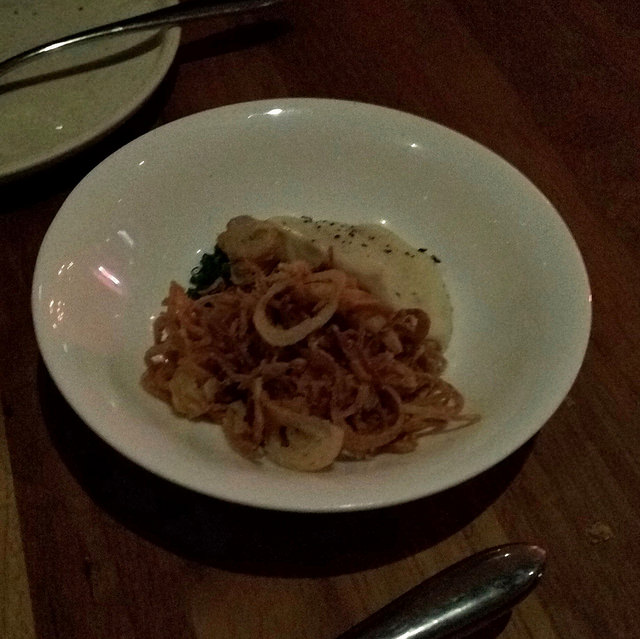 The Crispy Scarlet Turnip Cakes were the most satisfying of the “Small Bites” we ordered, and also the most recognizably Chinese. They came in a puddle of not very sweet sauce, and had satisfying crunchy bits in them. 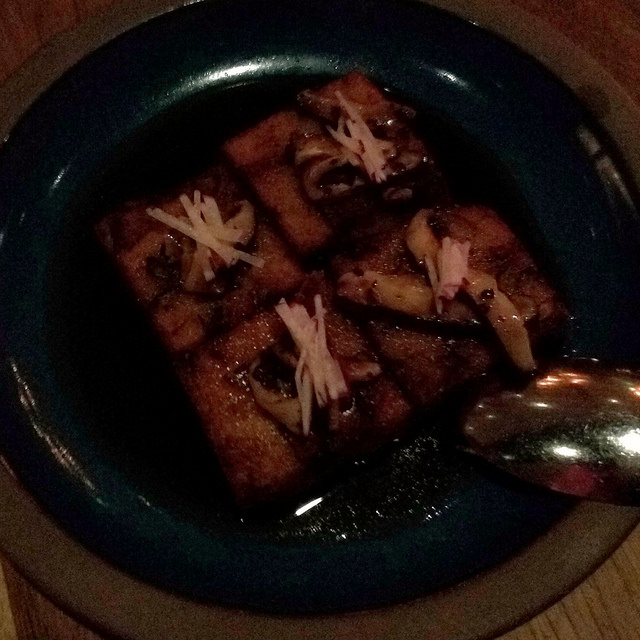 The Devil’s Gulch Pig Head, from the charcuterie section of the menu, was probably my favorite dish of the night. It’s actually a kind of head cheese. According to the waiter, it’s made from a whole pig’s head (or contents thereof) which is pureed, molded and sliced thinly. The slices came garnished with kohlrabi and tea egg slices, and topped with a huge, crunchy amaranth cracker (which I forgot to remove before photographing). My daughter declined to eat any of it (she found the whole notion gross) so I got to eat all four slices, which together could have made the filling for a decent sandwich. 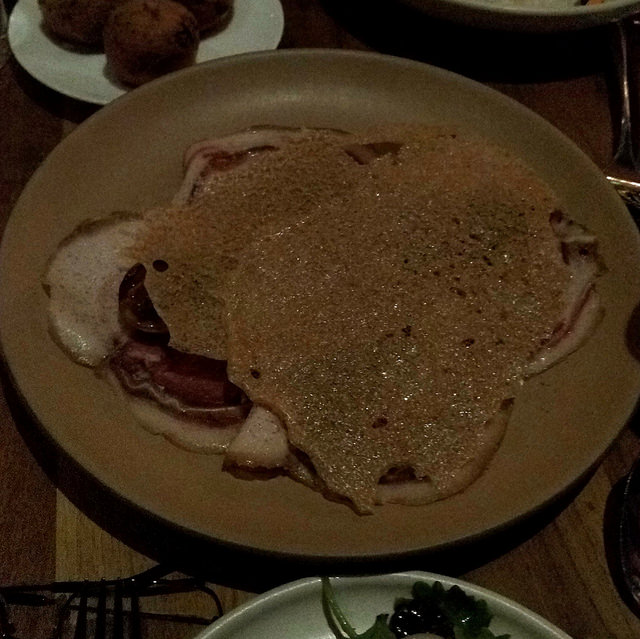 For a “filler” we ordered the Steak Fried Rice, which was also a winner. It came in a deep pot, and I was hoping it was like a clay pot rice with crunchy burnt rice. It turned out to be on the wet side, a bit wetter than the typical fried rice. It was delicious, though, studded with Wagyu beef, crispy garlic, tuna heart and broccoli. 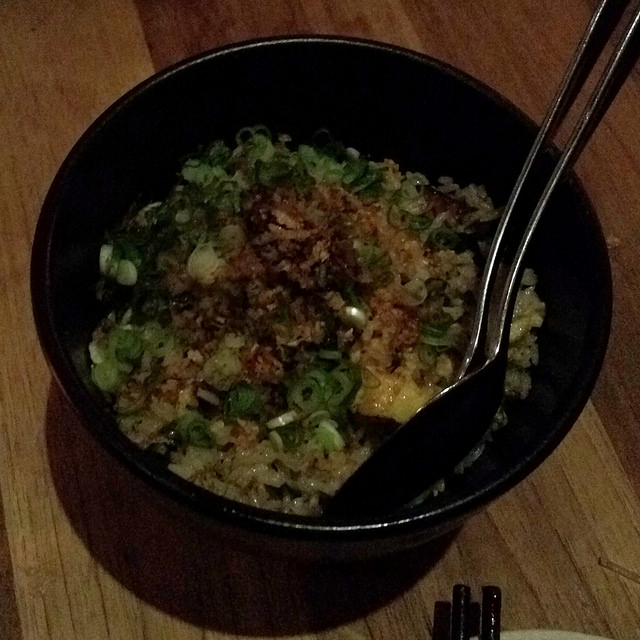 For our “main” we chose the Sizzled Black Cod. The three firm, fat chunks of filleted cod were bathed with an oyster broth and garnished with bok choy, tatsoi, and young ginger. This was also an excellent dish. My main complaint was that there wasn’t enough of it. Another time I’d cut back on the appetizers and go for the “Large Format” whole trout. 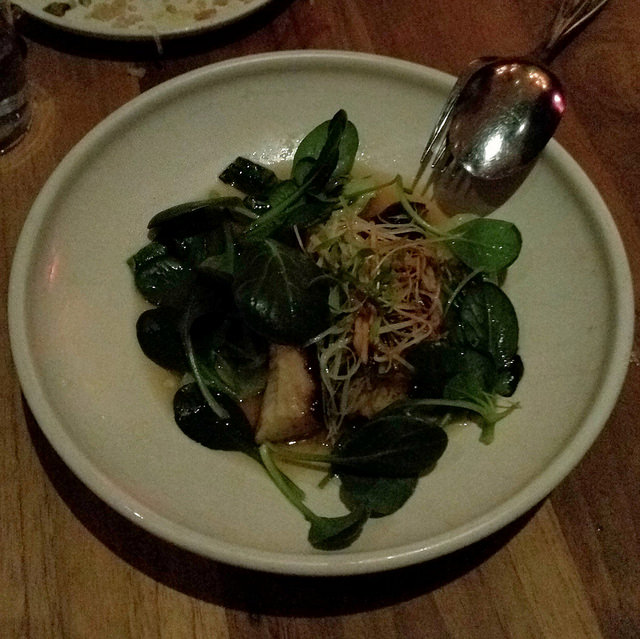 My daughter and I were both sated by this meal, and she even took home half of the fried rice to share with her mother. The total bill, exclusive of drinks (which we ordered at the bar while waiting to be seated), tax and tip, was $110. At $55 pp, it’s about what one would pay at China Live or M.Y. China, and Mister Jiu’s is a Michelin star ahead of them.

On the way out, I glanced at the open kitchen, and found myself making eye contact with Brandon Jew himself. He did a double-take and called out my name. We had never met in person, but have often interacted in the social media, and he recognized me (it’s the beard and beret, baby). I reminded him that he owed me a freebie, as I had contributed to his “last mile” Kickstarter campaign and hadn’t collected my reward, and he acknowledged the fact. You can bet I will use this social capital to get a reservation at a time of my own choosing next time.

$110 for 7 dishes is really not too bad at all. Consistency of Michelin’s evaluation criteria aside, I don’t remember too many 1 star that let a diner out the door with a full stomach at $55 or below for dinner…

How open was the bar?

My dinner reservation is next week. I haven’t started looking at the menu yet. But your report gives me some good ideas to start with.

The menu on line (as of this moment) is still the Fall menu, but the Winter menu now in use is virtually identical, with one dish added (Applewood Smoked Tofu) and 2 or 3 price increases (including a $1 increase in the pork buns.

My DD reminded me that I should have mentioned that she liked the Sourdough Scallion Pancake a lot. With me, it was just a matter of a texture that I dislike. If you like the gummy texture of beignets or deep fried rice balls, you probably will like this dish.

It’s also a good item to include if you want to fill up without breaking the bank.

Thanks. How thick was that pancake/ cake?

Would you say the meal was more Chinese or more, I guess, Californian? It seems to read more Californian techniques with Chinese ingredients…

About 2.5" I would guess. But light and fluffy (but gummy/chewy at the samec time).

From what we had, definitely more Californian, but there are items on the menu that would probably come out as more Chinese.

Unfortunately two of us got sick during the holiday so we never made it there. We stopped by yesterday to see if they had space for walkins but the place was like a zoo.

I returned to Mister Jiu’s on a Wednesday (October 24th) with my youngest sister who was visiting from Upstate New York. After dithering about where to celebrate my 77th birthday, I figured MJ’s would be both accessible and exciting enough for my sib, who has an adventurous palate, so I spent some social capital and got a last-minute reservation.

In addition to repeats from my first visit (Dutch Crunch BBQ Pork Buns, Crispy Scarlet Turnip Cakes and the must-have Devil’s Gulch Pig Head), we had:

Overall, I found it an even better experience than the first visit. The Pork Buns, for one thing, were better than I remembered, perhaps a bit larger and with shells that were crunchier and had less of a glutinous rice gumminess to them.

The Fermented Cabbage was a nice palate-whetter, sort of a cross between kimchi and sauerkraut. With a $5 price tag, I’d out this on my must-have list.

The Chilled Beef Tendon was a serendipitous bonus; while we were debating whether to order it or the Sirloin Cap Mapo, we left the server with the impression that we wanted both. It had the tendon sliced very thin, and the dish left the impression of being a (very enjoyable) take on a “Couple’s Delight” (fu qi fei pian) by Brandon Jew.

The Sirloin Cap Mapo, our original intention, was also very good, with the beef imparting a different flavor characteristic than the usual ground pork. It was also surprisingly spicy, considering the venue; not Sichuan spicy, but at least a two-Chili entry on a typical Cantonese restaurant menu. This dish also brings with it a good excuse for requesting the complimentray bowl of Kohuko Rose Organic Rice.

The Lion’s Head Meatballs was a last-minute choice for our only “main.” It was a new addition to the menu, replacing the Crispy Roast Pork I had planned on ordering. (Why, oh why, are restaurant websites always one menu behind?) It was a solid, but unexciting version of shi zi tou. My wife makes this dish frequently, always tweaking the flavor profile, and I couldn’t decide where Mister Jiu’s would rank against her panoply of offerings. It came served in a broth that was, however, more interesting than the predictable “hong shao” reduction.

As before. I had set an arbitrary target budget $100 exclusive of drinks, tax and tip, and it was only the unplanned second dish that pushed us over the mark. Thanks partly to the free rice, we left stuffed.

Note: we arrived at about 5:45 for a 6:00 reservation, and there were half a dozen empty seats at the bar, so waling in and eating at the bar may be easier now that the $15 cocktail set has moved on. 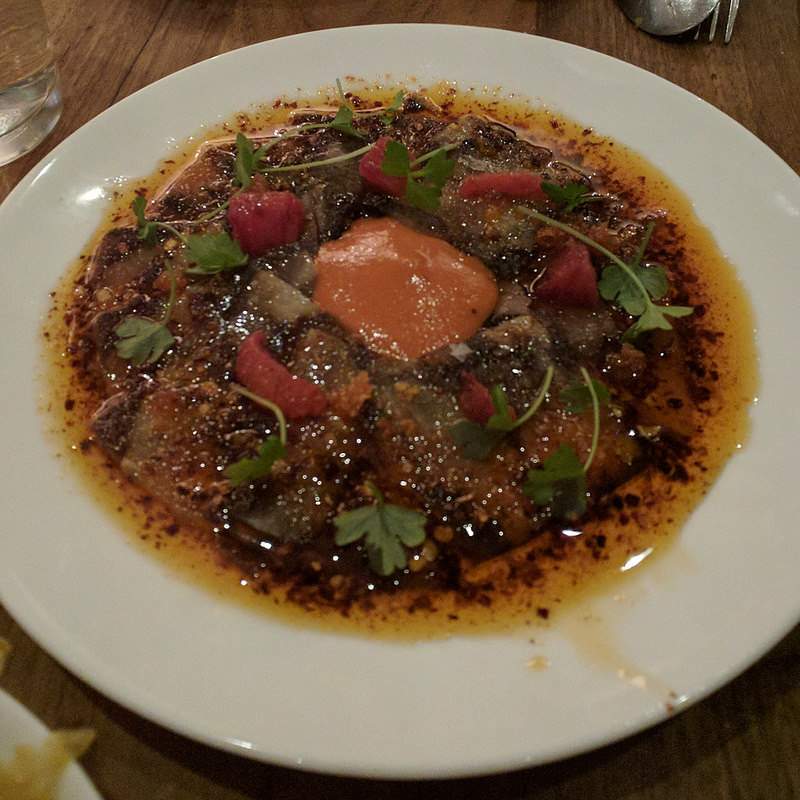 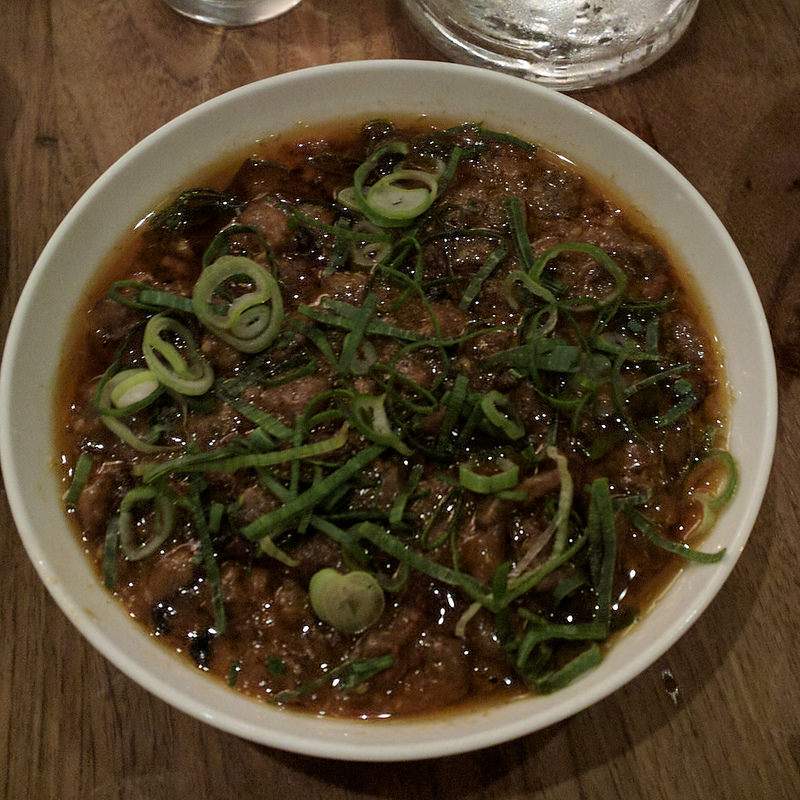 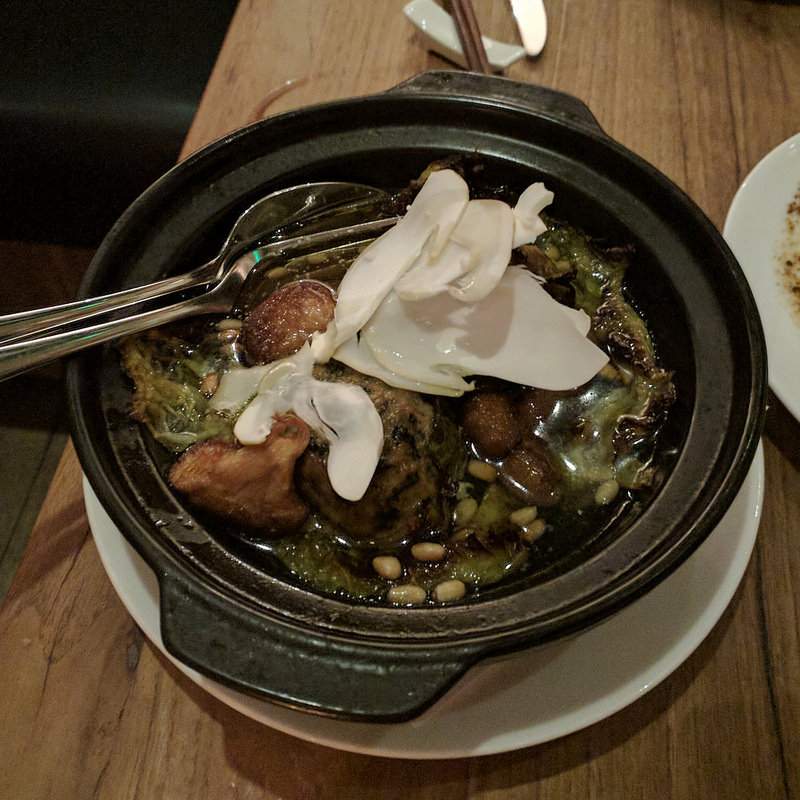 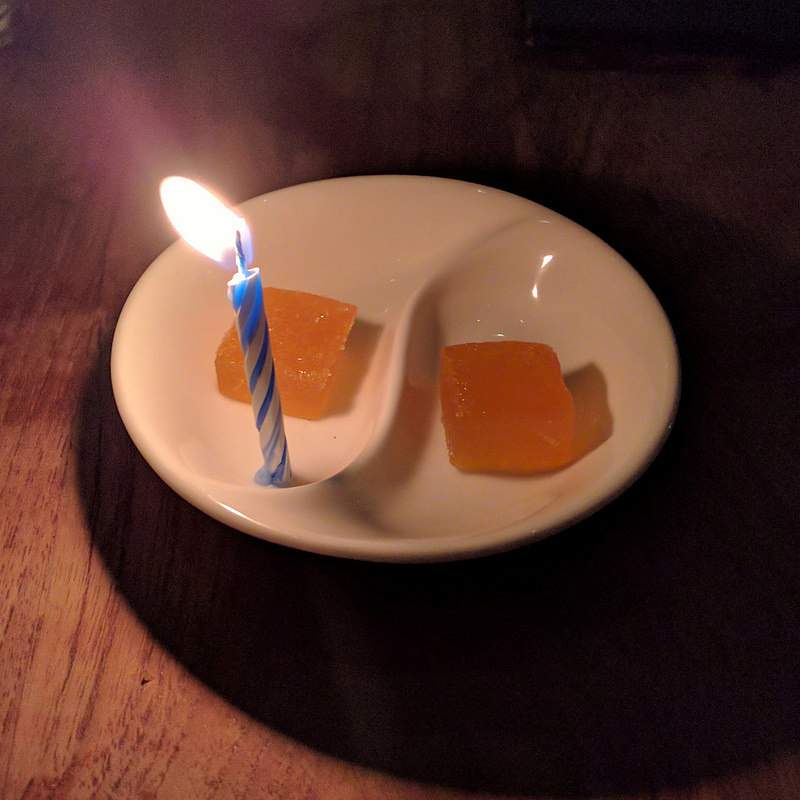