The restaurant started as a tiny 4 seat restaurant 60 years ago specializing as a biryani restaurant using the recipe from the owner’s mom. The Chennai community in the Bay Area already knew about the 2-month-old branch and gave plenty of online comments- a rather scathing Yelp rating of 3 stars from over 100 reviews . I had wanted to visit earlier but preferred to wait so the management has a chance to sort out the aspects of the operations that receive the most of the unflattering comments: service, wait time, uneven kitchen execution amongst other comments on portion size and price. I got a chance to get a couple of takeout dishes last week, and based on a very limited sample, I’d say that the food was very good, and I noticed nothing subpar about the wait/ service, and I’d returning soon to sample more of their Tamil Nadu specialties. 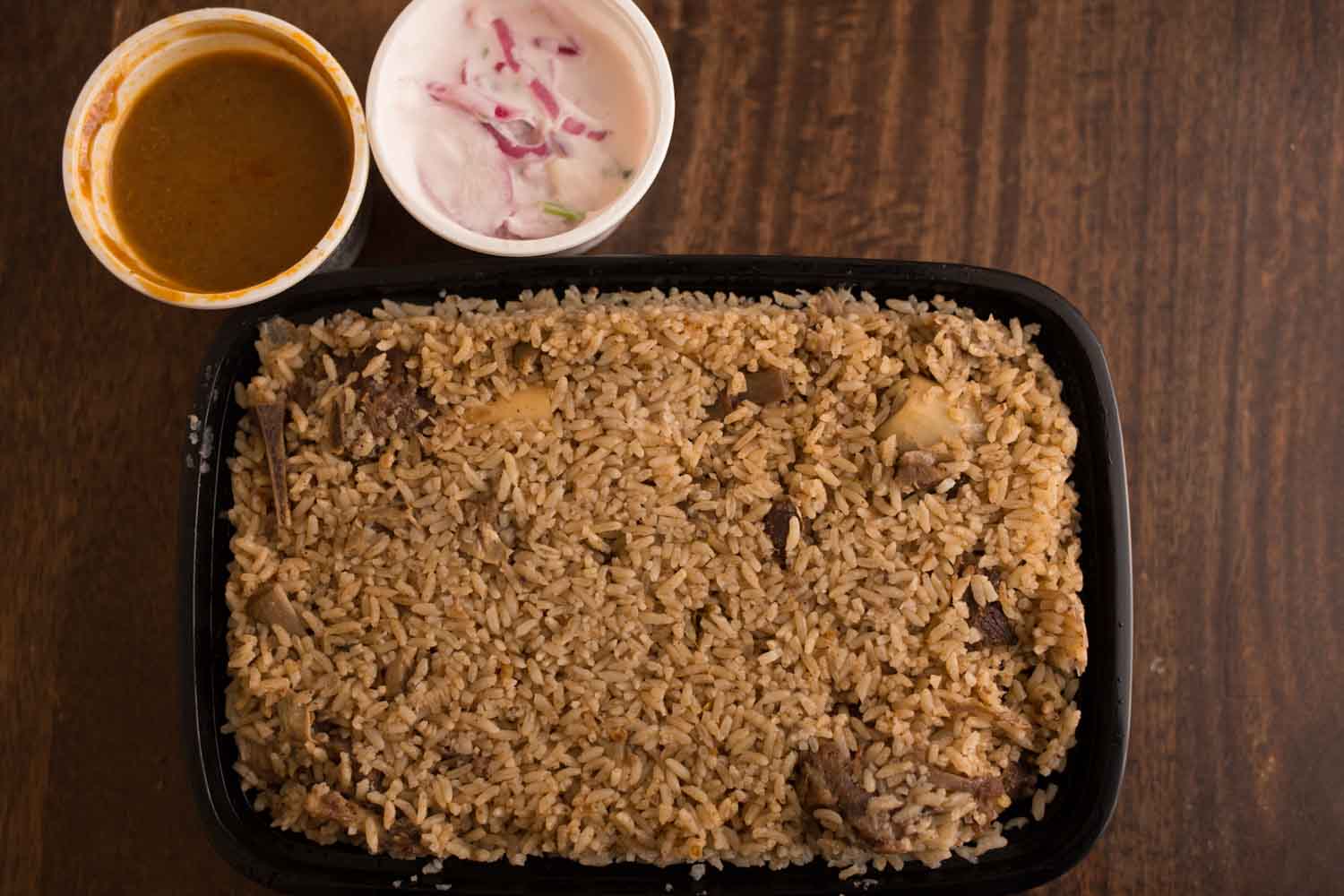 the Mutton Biryani- Their dindigul rendition uses the seeraga samba rice, which was a short grain rice from the Tamil region. Their biryani was fluffy, loose, very well seasoned with the grains separate from each other with a good texture. Much better than another dindigul from earlier this year at Bawarchi (the thalapakattu biryani). I only added a little bit of marsala to perk up the flavor- I thought the pilaf by itself was good already. The raita was the sweetest I have ever tasted so I prefer something a bit more yogurt-y. The pieces of mutton, buried within the pilaf, contained a mix of flavorful meat and tendons attached to bones. Some online reviews brought up the issue that the ratio of meat to rice was low, though I thought the amount was spot on, and the meat attached to bones, though not large in size, was more enticing to me than if large chunks of flavorless meat were used. The biryani dish overall was not huge like some was expecting, but its not puny either. Overall, a very good biryani dish, and my current favorite in the South Bay. 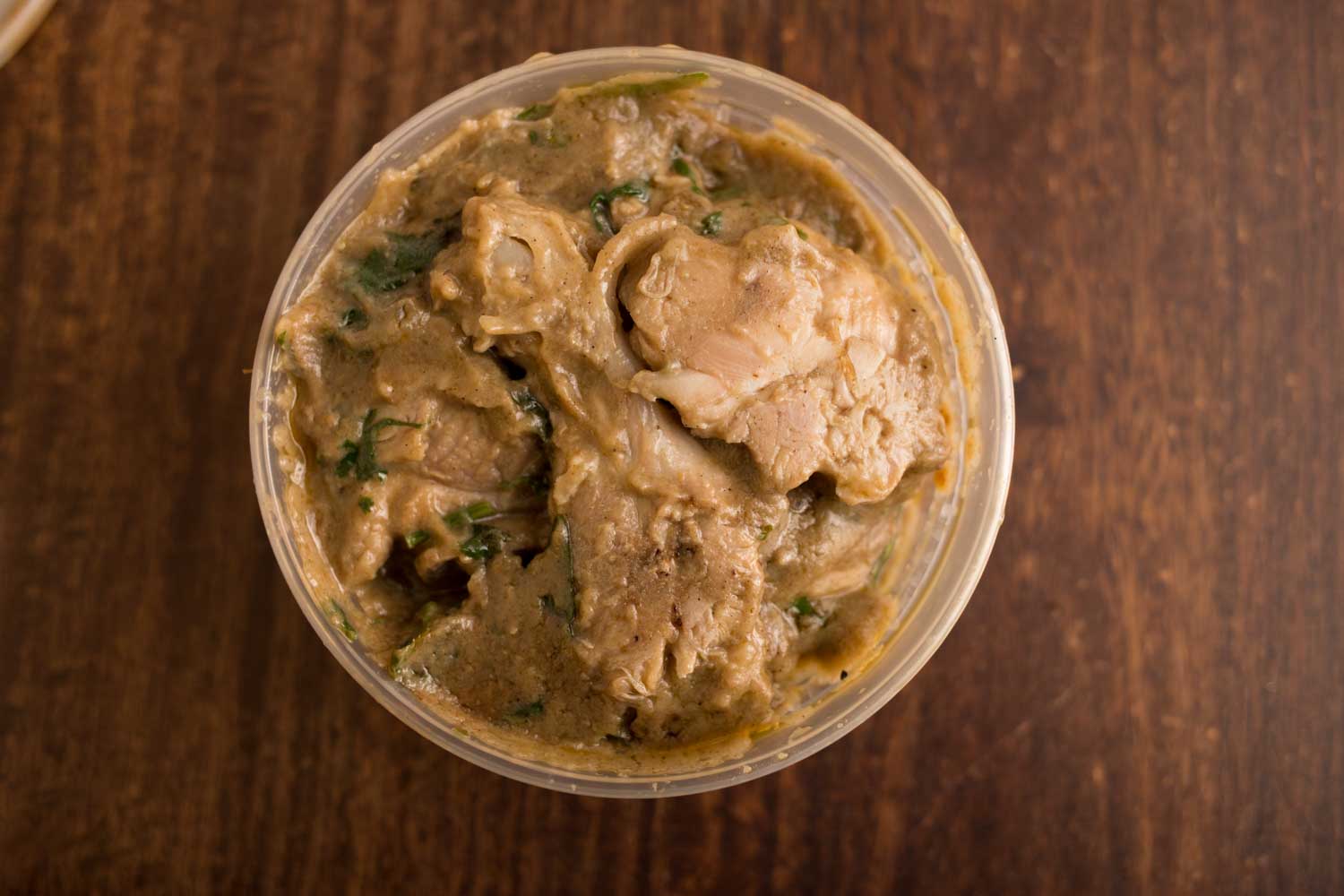 The pallipalayam chicken I wanted was out, so I got the kodaikanal chicken roast. I was quite happy with the biryani that they are known for. But one taste of the kodaikanal chicken, its clear the star of the meal was the chicken instead- chunks of dark chicken meat cooked just right in a creamy, milky, nuanced, balanced, fragrant, and slightly spicy sauce/ curry, and absorbed all of that wonderful flavor. It shared the same creamy and milky characteristic with the nihari dish from Zareen’s, but of course, was a completely different dish. The dish also came with an unknown-to-me small narrow pointy leaf herb that provides a cool refreshing balance to the sauce. Great dish. I could see why people might think portion was small comparable to dishes in other Indian restaurants in the U.S., but quality beats quantity any day in my book. And curry type dish is not supposed to be a humongous pot that requires 8x more carb to finish than provided.

Highly satisfying meal. Hopefully their other dishes measure up to high standards set by these two.

@klyeoh Have you been to their KL branch? Any dish to recommend? 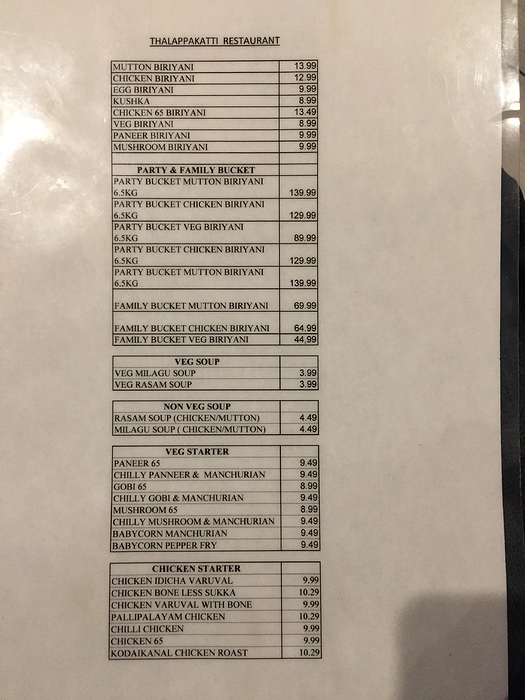 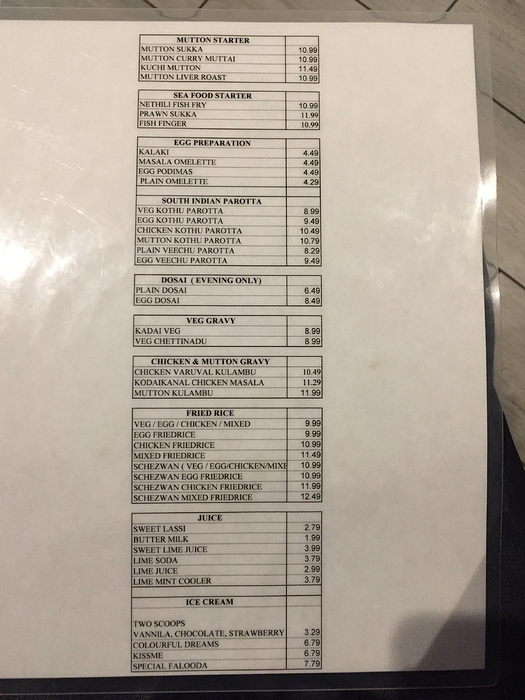 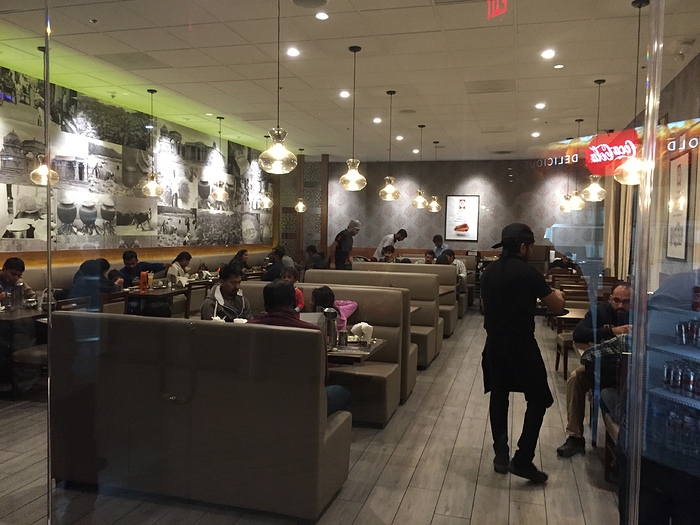 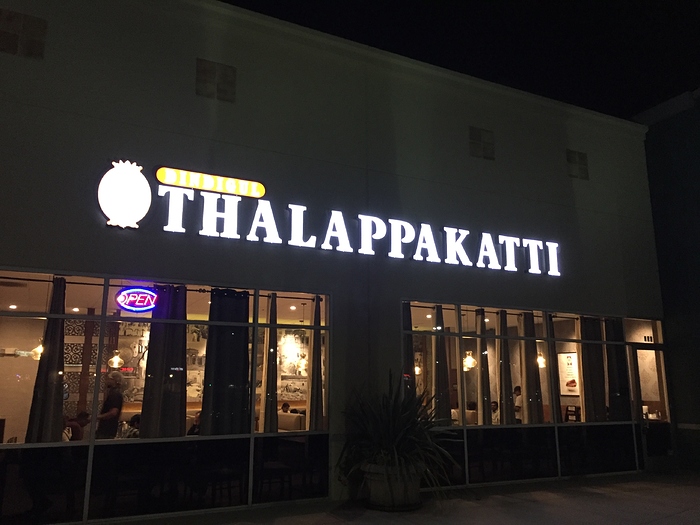 @sck: I didn’t have the opportunity to try its first KL branch in Sentul (which closed down around 2014) nor its newly-opened branch in Brickfields, KL’s Little India.

But I’ve been to one of its Chennai branches in 2014, but found its dishes to be too spicy for my taste. None of the dishes really stood out, not even their signature biryani.

With my colleagues at the Chennai outlet in Medavakkam: 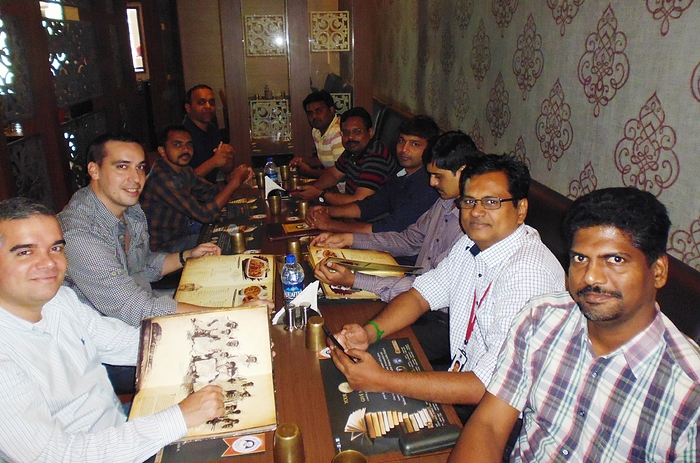 The outlets in Chennai - it is a very successful chain over there: 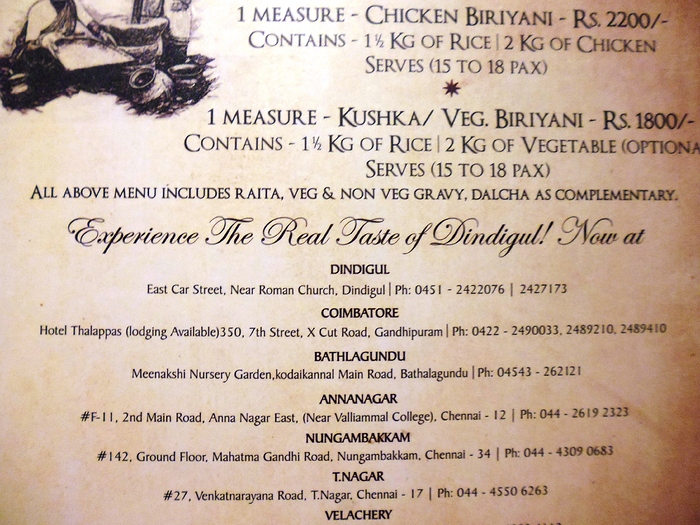 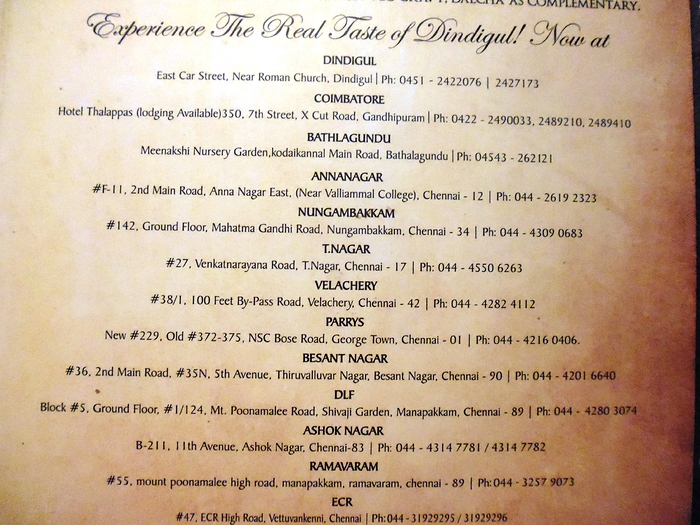 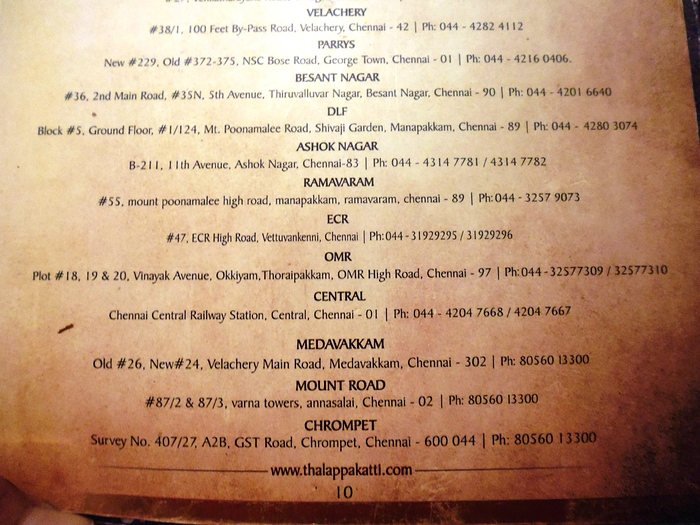 But I’ve been to one of its Chennai branches in 2014, but found its dishes to be too spicy for my taste. None of the dishes really stood out, not even their signature biryani.

Interesting observation. The two dishes were well within my spice tolerance. If spicing level of other restaurants here serving Chennai food is representative of the spicing level of typical Chennai food, then Thalappakatti probably either tones down all their dishes, or more likely, toned down the dishes just for me- I am sure they could tell I wasn’t Indian on the phone.

In Chennai, the locals normally like to say that Chettinad cuisine (a sub-region within Tamil Nadu) is the spiciest. But my experience with local cuisines there seems to show that all the food there has a spice level higher than what we’re used to in Singapore. Historically, Tamils are the majority of the Indians who’d migrated to Singapore since the 19th-century and now still forms about 10% of Singapore’s population (Tamils also form 6% of Makaysia’s population). In Singapore, Tamil is one of the four official languages in the country, besides English, Mandarin and Malay.

Chettiars, a caste specialising in the money-lending business from Chettinad, has a strong presence in Singapore and Malaysia traditionally. Their cuisine is very much part of Singapore/Malaysia’s food culture.

Recently had their mutton and nattu koli biryani. Very nice. Details in the post below.

Their chicken varuthathu, an appetizer, is quite something. Finger licking delicious. Google search led me to believe this is a Keralan chicken fry dish? Although it didn’t seem particularly fried to me. Nonetheless, Dindigul Thalappakatti has been doing a swift takeout business these days. No wonder. If their other dishes are as good as their biryanis and the varuthathu, Thalappakatti would be safely among the top echelon of budget Indian restaurants in the South Bay. 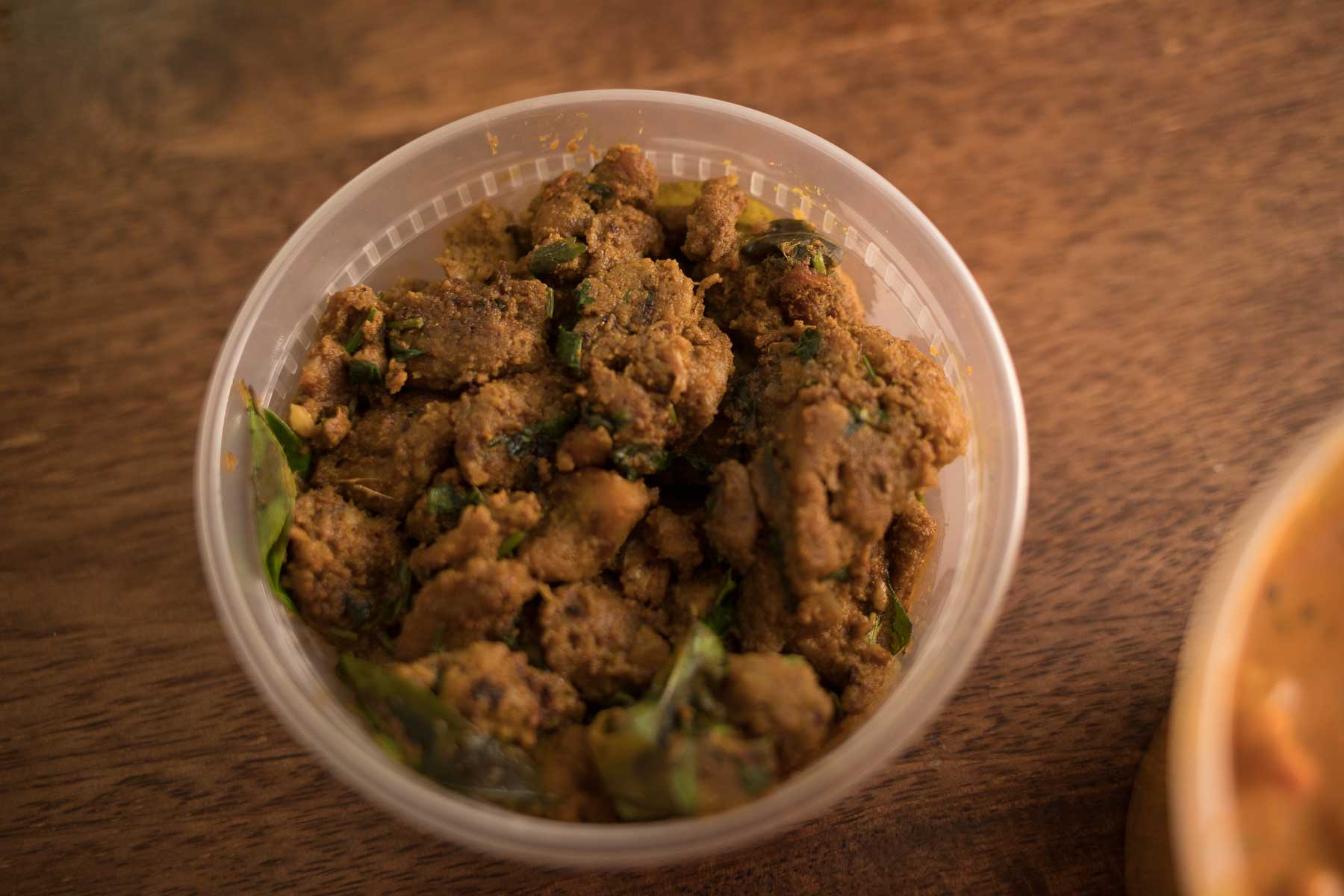 The cooking term is indeed from Kerala, but I wondered why they used “varuthathu” on chicken, as we usually hear of fish varuthathu, but never the former.

The Malayalees commonly roast their chicken (kozhierchi varthada) or fry them (kozhierchi porichadhu), Else, cooked in a curry, with coconut milk (kozhierchi thoran) or without.

I don’t have Malayalee friends whom I can call and ask at the moment, but would be great if there are any Malayalams on Hungry Onion who can throw a light on why the menu writer chose this term for their chicken dish.

Its hard to tell which item on the menu this dish is. I originally asked for the rabbit roast. But they said that they haven’t been cooking that for a while. Same thing for the next item I asked for, the kodaikanal chicken roast. They suggested the chicken varuthathu, which they said was similar. In fact, I didn’t hear clearly what they suggested on the phone and just went along with it. The receipt said chicken varuthathu.

Here’s the chicken app section of their menu.

Back in Chennai, the Thalappakatti chain is really popular for their biryanis.

Ahhh! Perhaps they just mispelt it on the receipt then. Glad to be able to order it again next time!