Porridge and Things is quite a pleasant surprise. The name conceals the fact that it’s a full on Chiu Chow restaurant, complete with classics - goose, soy-marinated parts, fried shrimp balls, oyster pancake and so forth. Even the tea service is sort-of Chiu Chow style, done using the tiny cups and small kettle to pour from. The food was quite a bit better than expected – we’ll definitely be back.

Did they serve Tieguanyin at the end of the meal?

Thanks for the report. I will be there.

Tieguanyin is one of the options for tea service. There is no post-meal tea like they do abroad.

I didn’t taste the goose dish closely enough to evaluate the marinade, but here are some rough pictures of the meal for you to look at. I’m normally more perspicacious when I try out a new restaurant, but didn’t take down any notes this time. 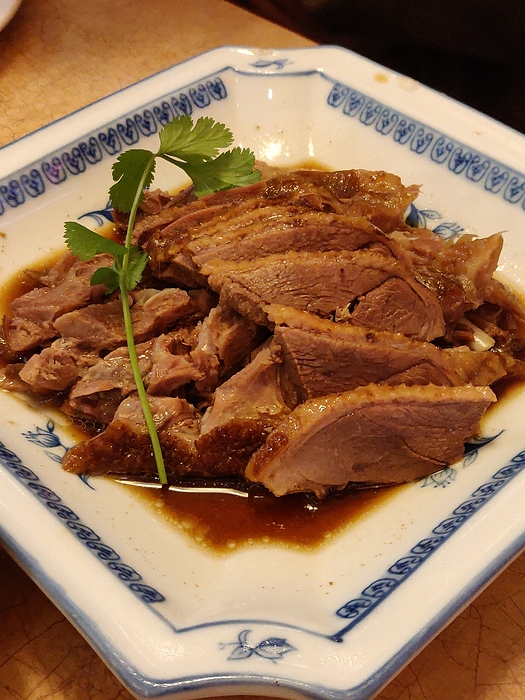 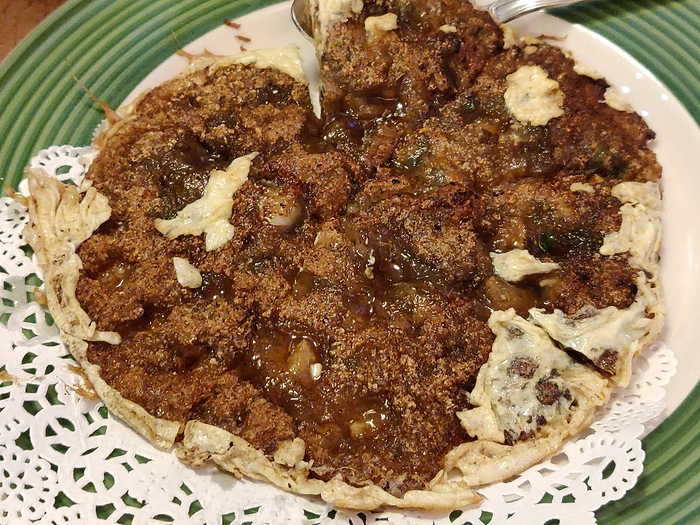 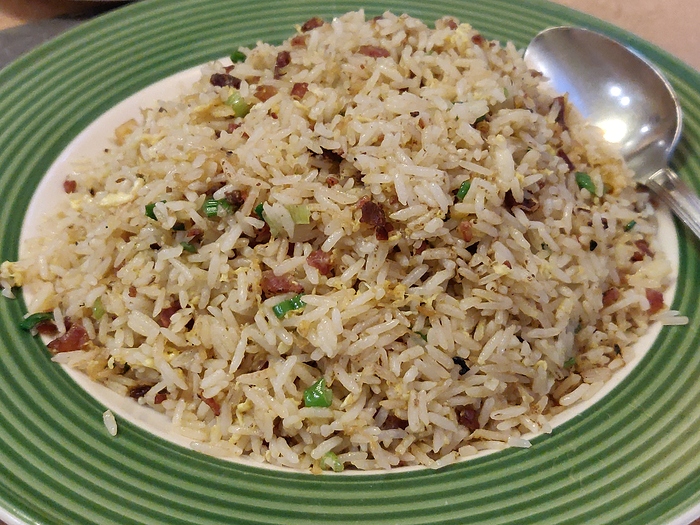 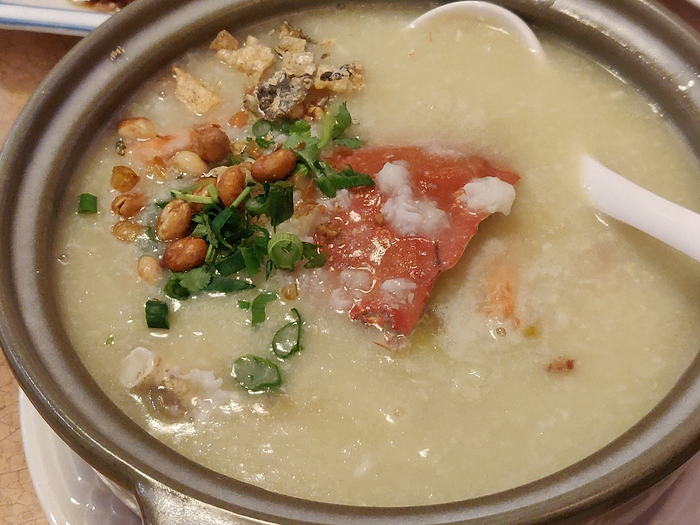 Oh I actually went here twice for dinner, one around the lunar new year and just this past weekend since they gave a little red envelope coupon. Was just too lazy to bother posting anything.

Note, I don’t really have a good knowledge on Chiu Chow cuisine, just generally aware of the basics and don’t have a great comparison (namely, I don’t even think there are five Chiu Chow style restaurants on the peninsula). I also didn’t really try that many places in HK either when I was there… oops.

Anywho! First round when it was soft opening: 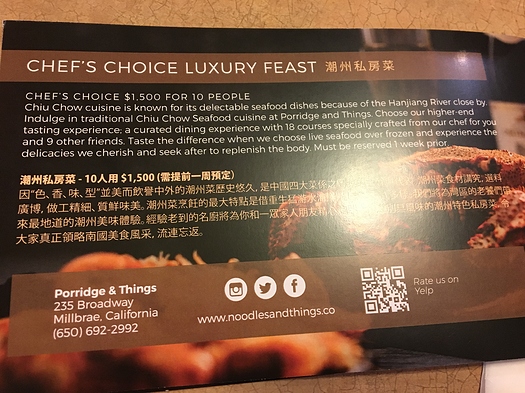 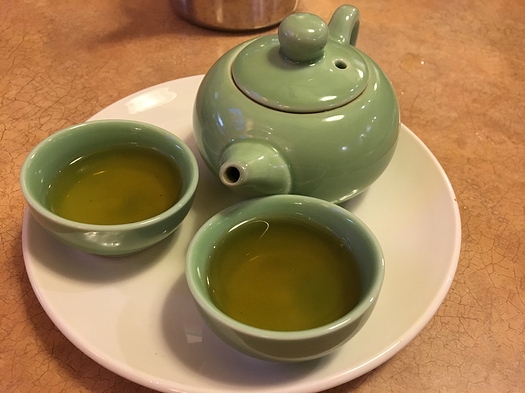 Started off with their kung fu tea which I think was Tieguanyin both times. I think I came in late both times so the tea was already served when I sat down. We opted for the 4 people meal for around $88. 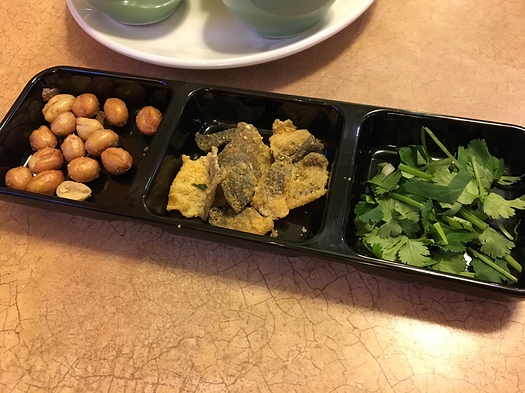 Some peanuts, crispy fish skin, and cilantro for the porridge. 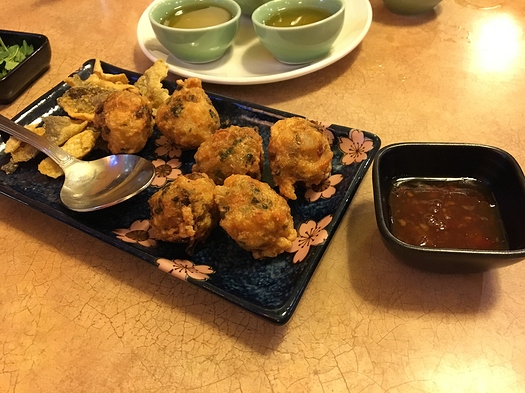 These are their deep fried shrimp balls. Chewy in the middle and crisp on the outside, I liked them enough. 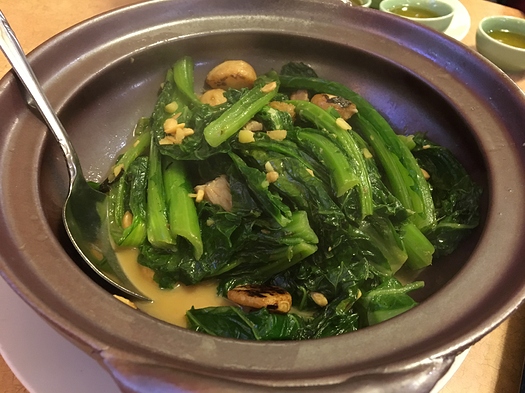 Next up was Mom’s spring vegetable pot which was … Achoy? I thought the sauce they used was on the saltier end. 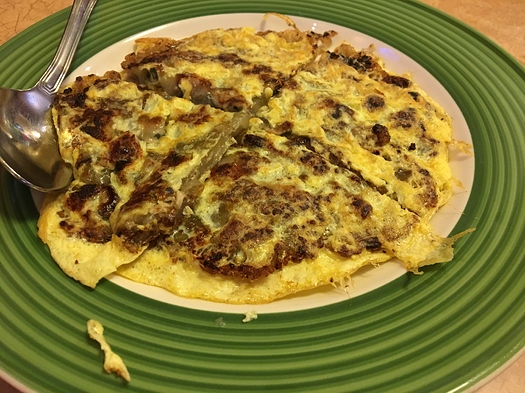 After that, we got their oyster omelette. Was initially quite crisp, and a chewy interior. I liked it though I thought it was going to be more like the Taiwanese style oyster omelettes, oops. 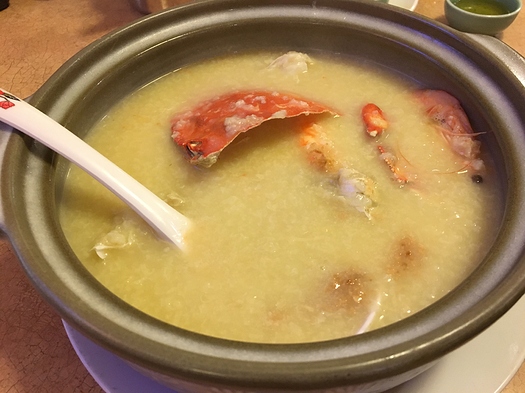 This is their signature dungeness crab sawo porridge. I wasn’t ever too sure about the ideal consistency of Chiu Chou style porridge, but I always understood it as more like broken grains of rice on the bottom and pretty much porridge water on the top. Dunno, it was more watery than your typical Cantonese congee but the rice grains aren’t intact at all so… dunno. I enjoyed it nevertheless as its also currently crab season. We were given half a crab, and the prawns appear to be the spotted prawns we saw in the tanks. 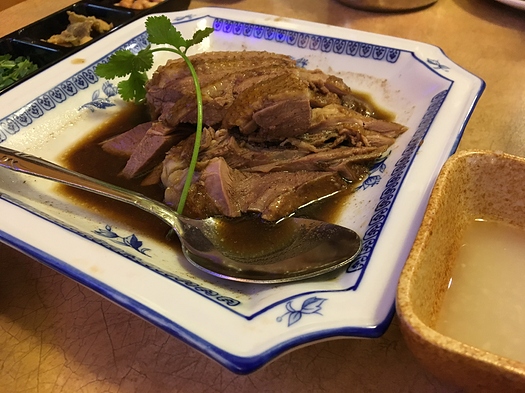 This was their braised goose, I thought it was mmm… okay? They have this interesting garlic dip with it as well. Dunno, maybe its just the US goose, but they’re really large compared to the HK ones (that or I just prefer roast goose more…). The goose is definitely more meaty than duck and the marinade isn’t especially salty. The goose I had was on the less fatty side as well which I don’t mind. 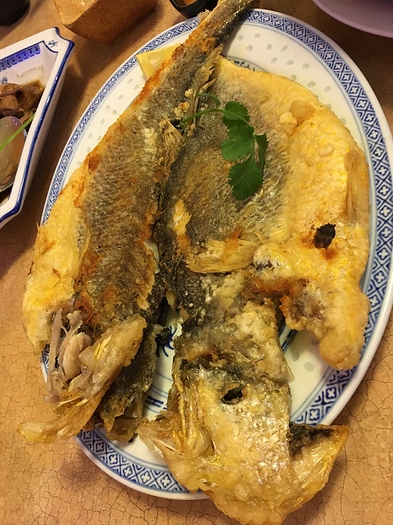 Lastly I think we ordered the pan fried pomfret (or… some other pan fried fish, I was late, they ordered without me!). The fish was crispy on the outside and not too dry. This was more lightly seasoned than I thought but its a nice change of pace with a dash of lemon juice as well.

Overall, I enjoyed the meal just wasn’t quite sure how close it matches to Chiu Chow cooking. I only recall going to Teo a few years back.

We opted for the other 4 person menu that was a little more expensive than the previous one we had. 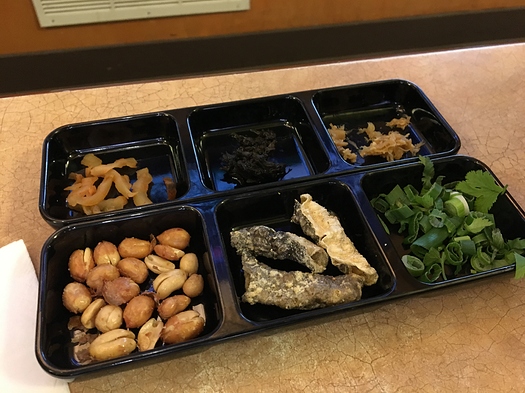 This time, we got two trays of goodies to add to the porridge. The closer row is the same as before, but this time there are some preserved vegetables, what I think are chopped Chinese olives, and some more finely chopped differently preserved veggies. I didn’t ask as the waiter was somewhat busy. 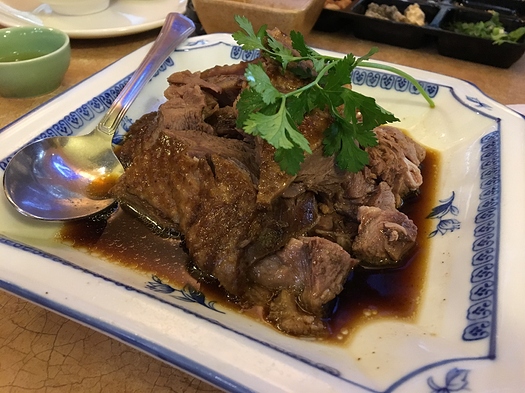 Goose tasted similar to before, though I will still say I’m not certain if I should be looking more towards tenderness or not for this dish. 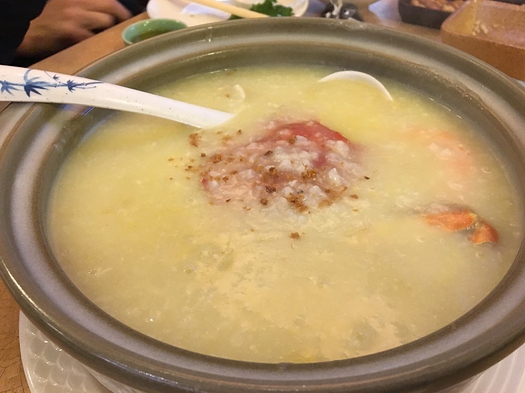 With the meal we also got their signature porridge. Once again, its half a dungeness crab and those spotted prawns. I dunno, those prawns had a more mushy texture than I preferred. 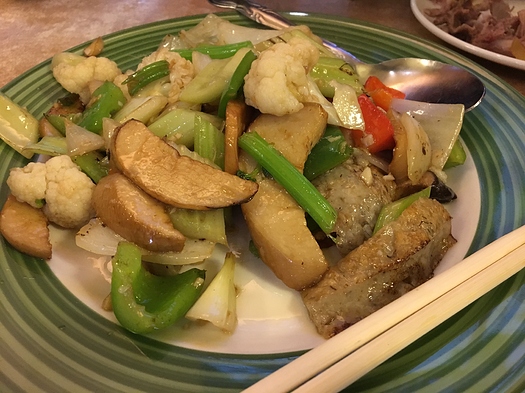 This was Benny’s stir fry which was rather pleasant. Had a few thinly sliced fish cakes in addition to the mushrooms and veggies. 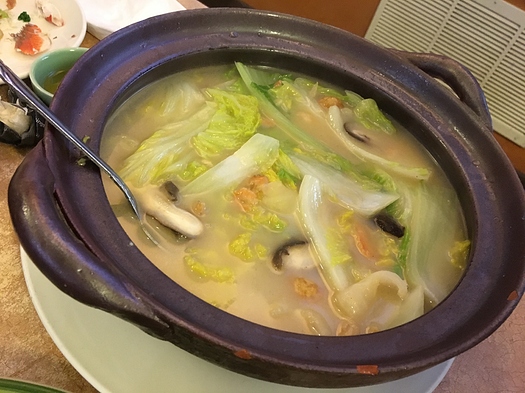 An addition to the set menu, we got the napa cabbage with dry shrimp claypot. The dried shrimp adds an extra sweetness and umami flavor to the dish. The soup had a light savoriness despite the coloration. 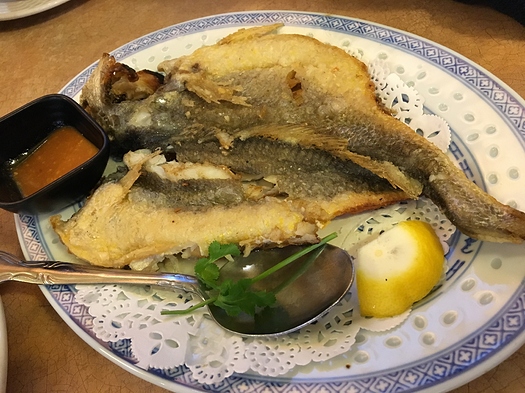 Well we got the same pan fried fish haha. The sauce that was given is sorta interesting. It was a little sweet and not spicy. 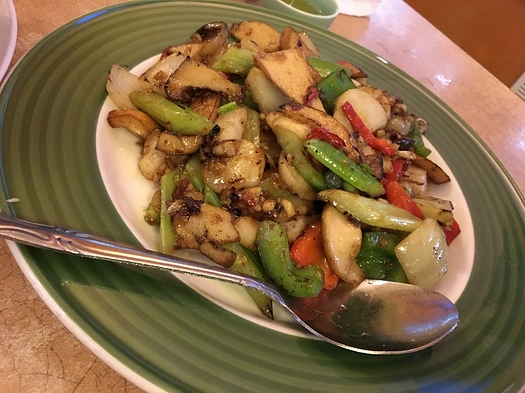 This was their XO scallop dish and it packs some heat in this dish. I’m not certain why additional spice they put in the XO sauce but I thought it was similar to a jalapeño burn. 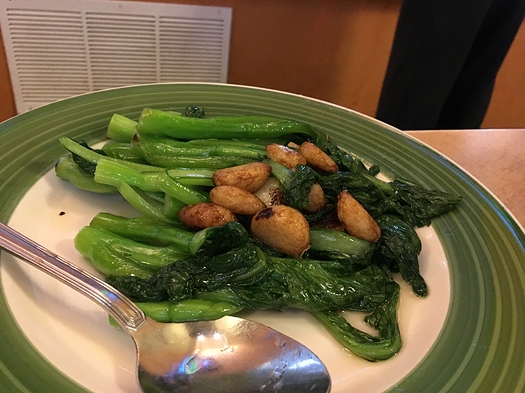 Then we finish off the meal with some lightly stir fried veggies.

Overall, I like Porridge and Things just its not really on the cheaper end and I expect the portions to be a smidge larger.

5 Likes
“Food is a pretty good prism through which to view humanity.”
― Jonathan Gold
Market stall in Lima
Credit: TXMX 2