Do you have good BBQ recommendations? 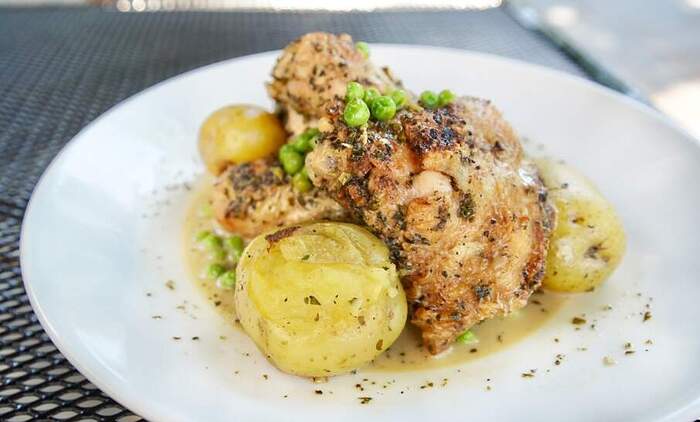 An Ode to Chicken Vesuvio, the Ultimate Expression of Chicago — Resy | Right...

If ever there was one perfect expression of Chicago on a dinner plate, it’d be Chicken Vesuvio: a meat-and-potatoes dish…

I’m working on DT/loop barbecue.
Waiting for Jeff the BBQ sauce maven to write me back.

Thanks for the reminder. I completely forgot about that board.

https://www.lthforum.com/bb/viewforum.php?f=14
Lots of Roadfooders were Chicagoans.
Local board still seems to be flourishing.
Enjoy.

@Pan It pains me not to be able to recommend anything current to you, as Chicago is near and dear to my heart (I lived there for 4 years too many years ago than I care to admit). Last visit was in 2019 and we didn’t eat out much with our friends.

I hope you saw the wonderful recent reports from @jiaozi and @mariacarmen. And @biondanonima’s brother used to helm an iconic Chicago restaurant. @GretchenS also had a great trip report as did @Mr_Happy. Some reports are a little old.

No need to limit yourself to the stereotypical Chicago foods. Korean is great but the authentic non-hipster stuff is on W. Lawrence St, far from the tourist areas. Awesome Indian is close to the Korean areas. Again, my data is wicked old.

I used to live in Pilsen, a traditionally Mexican neighborhood. Friends have told me that I would be sad to see the old neighborhood but on the flip side, good food is supposed to still be had. Just way fancier. The mom and pop Mexican places have probably been replaced. They were humble but to my Korean gringo tastebuds, the food was mind blowing.

Please report back if you can (I’ve enjoyed your other reports). I am trying to go back next year.

Edited to add a bunch of things. As a newbie here, I know it’s difficult to know who to trust. These people’s tastebuds can be trusted. Lately, it’s been hard to separate the signal from the noise.

I visited Chicago at the beginning of March 2022 for a week-long conference. Overall, I felt that Chicago lived up to its reputation as an excellent, multicultural, and innovative food city – I always looked forward to my next meal and often considered finding people to skip conference sessions with me to…network? cough cough. To give some context, I was visiting from SF via Hawaii There are pictures missing for some of the entries below, and you have my apologies for this. Places visited: Yu…

This will be long. Thanks to all who chimed in about where my sister & I should eat this past weekend. Not enough days/stomach real estate, but we did our best. Never had bfast out - usually just snacky stuff in our hotel room and/or leftovers from night before. First night, unfortunately, we had a terribly disappointing dinner at The Publican. Everything was either meh to inexplicable to just bad. At first we kept thinking it was us, are we just picky, are we spoiled, etc. but no, it was…

Made another visit to Chicago to meet my sister and her family for Christmas and I am officially in love with this city! It helps that they were practically giving hotel rooms away over Christmas week – we stayed at The Blackstone in lake view rooms for $103 a night (AAA discount). The rooms were extremely nice and the hospitality from the staff was way above and beyond, truly special. But let’s get to the food. Places We’d Go Back To: Eleven City Diner. Pleasant walk from the hotel and serve…

What a terrific city you Chicagoans have! We lucked out on weather last weekend so that helped. We were so blown away by how attractive the downtown and lakeshore area were and the municipal tulip budget alone must be astounding. Also we ate very well indeed. Dusek’s. Fun, funky, very loud. Very good food (beef fat frites with harissa ketchup, smoked trout rillettes, flat iron steak with veal roulade, salsa verde, and trumpet mushrooms and choucroute with duck leg confit, duck sausage, sea…

I will report on what I find. I’ll look for those reports you flagged for me, thanks!

This is a really cool story and review. Thanks.

As a newbie here, I know it’s difficult to know who to trust.

Apologies @Pan - I just looked at your profile. You’re not a newbie. I’m just clueless!

I thought you meant a newbie to this board, which I am. I post close to exclusively on the NYC board.

I don’t have any specific recommendations, but greek and japanese food (izakayas, maybe?) are probably worth exploring - long history of greek presence, and I expect that the fish quality in Chicago is pretty good. There are also a large number of highly lauded burgers in Chicago, if that’s up your alley. Seconding LTH as a great resource!

One wild card is that we’re both of partly Polish ancestry (Jewish in my case, Catholic on hers), so we might do a day trip to the Polish neighborhood on the Northwest Side just to do it. If there are any particularly excellent Polish places up there, I’m all ears.

I just checked reservations for 2 at Frontera Grill, and they are booked solid through September. Do you think it’s worth showing up in person, or would you call and see if they have cancellations? We do have the option to do takeout if we can’t eat there on their terrace because they’re too popular.

You lookin’ for traditional Polish, or a modern touch?

Now that the National Flute Association convention, which I was attending, has ended, I have a chance to do my first installment of a report on our dining experiences in Chicago so far. We have been to Sociale (800 South Clark St.) twice. The first time, we went on an off hour, around 4:30 on Thursday. The second time was today a bit after 6. We consider this place special and worth it for a bit of a splurge.

For our first meal there, we split an order of seared Faroe island salmon filet on a bed of sauteed spinach, chopped garlic, oven dried tomatoes, pan fried red skin potatoes with caper beurre blanc ($30) and two separate sides of wood roasted Brussels sprouts with crispy bacon, lemon aioli and migas ($12) and wood roasted wild mushrooms, chives, herbs and white truffle essence ($10). I had a glass of the chardonnay from Daou in Paso Robles ($13) and my girlfriend had a Tarrica pinot noir ($12). The salmon was completely fresh, with crispy skin and seared to a perfect degree and the accompaniments and sauce were delicious. The mushrooms actually seemed to me like thin-sliced creminis, but the sauce was wonderful and we loved that side. The Brussels sprouts were good, though a bit chewy, and to me, the outside leaves were a bit too charred, but I know that’s popular. Both wines were good but the pinot noir was special, and we will search it out in a wine store in the future. 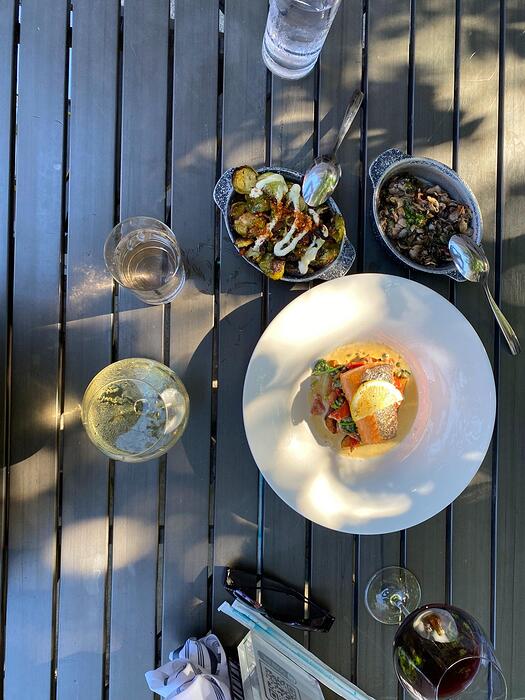 Our second meal at Sociale consisted of the pickled heirloom beet salad, mixed field greens, goat cheese, pine nuts, pickled red onions and orange blossom honey vinaigrette ($12), the boneless wagyu ribeye steak with spicy scallion chimichurri sauce ($35) and the apricot chocolate croissant bread pudding, anejo caramel, candied pecans and vanilla gelato ($10). Everything was great. We got the wagyu medium rare, which was perfect. We both had glasses of Daou cabernet sauvignon with the meal ($16), which had nice complexity and went very well with the steak. 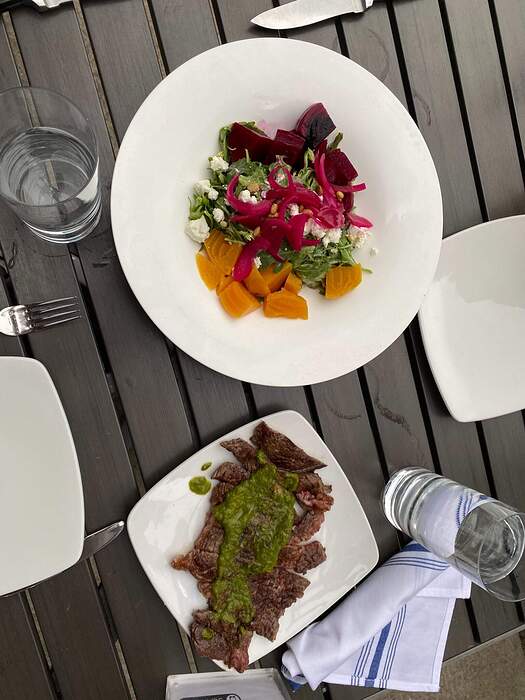 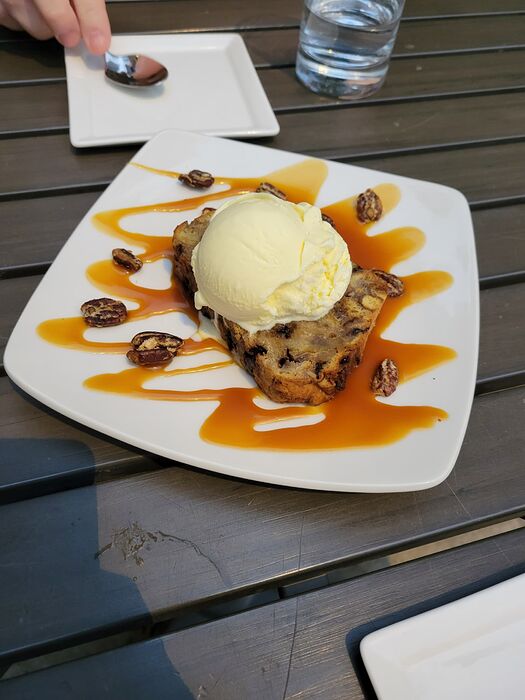 [Edited to add a picture of the bread pudding.]

Service was excellent both times, and the waitresses consulted with the bartender about what wines would go best with the meal. We’re already thinking about going back on our next trip to Chicago, whenever that is.

Yesterday, we had dinner at The Gage (24 South Michigan Avenue) before going to a concert at Grant Park. We were rushed, so we asked for our salad and main course, both of which we shared, to be served simultaneously, and we still ended up missing part of the first movement of the Shostakovich Violin Concerto, which was played splendidly by Christian Tetzlaff and the Grant Park Orchestra. Our service was very gracious, and the food was delicious but definitely pricy. We got the Gage Caesar - romaine heart, broken Caesar dressing, brioche crouton, anchovy, Parmesan ($15) and the pan seared Alaskan halibut, pea tendrils, English pea, fingerling potato, spring onion, dill, lemon beurre blanc ($38), The sauce for the halibut was so good that the two of us, who usually don’t like peas, liked them pretty well, especially as they were not raw but not mushy. The halibut was perfectly fresh. The Caesar was great and was a revelation to my girlfriend, who had never had a Caesar salad nearly that good and actually liked the anchovy, which she usually hates (I didn’t get an anchovy but enjoyed the taste it imparted). My girlfriend, who favors red wines, had a Land of Saints pinot noir ($15), a delicious wine, but we agreed that that was a mistake to order with a delicate white fish, and I had a House of Brown Chardonnay ($16), which I was very happy with. No pictures because we were both really hungry and also in a rush. We think The Gage is a great restaurant, but if one person has a full meal there (app or salad, main, dessert, wine), that would be an expensive proposition, indeed.

The other noteworthy eating experience we’ve had so far is a trip to Kilwins Chocolates, Fudge & Ice Cream ( 310 S. Michigan Ave) with a friend who was in the chorus for the Vaughan Williams “Dona Nobis Pacem” after the concert. I got a waffle cone of the chocolate shredded coconut and pralines ($10.79), my girlfriend got toasted coconut and butter pecan in a cup ($10.29), and our friend got a cup of chocolate chip cookie dough ($7.29). The scoops are humongous! They offer half scoops, which might be a good idea if you want to have more than one flavor. Anyway, we were all really happy with the flavors we got, and in particular, I liked that they use pretty dark chocolate, but this is pretty dense soft serve ice cream and fills you up easily. No photos - handling ice cream is messy! - but I recommend the place, although, I wouldn’t have the blue ice cream.

We’re tempted to go back for some fudge or a milkshake.

How much longer are you there?
I know a Chicago Symphony guy who’s an avid Roadfooder.
He loves dessert.
https://www.hoosiermamapie.com/
Favorite haunt

We leave on the 20th. Thanks for the link! 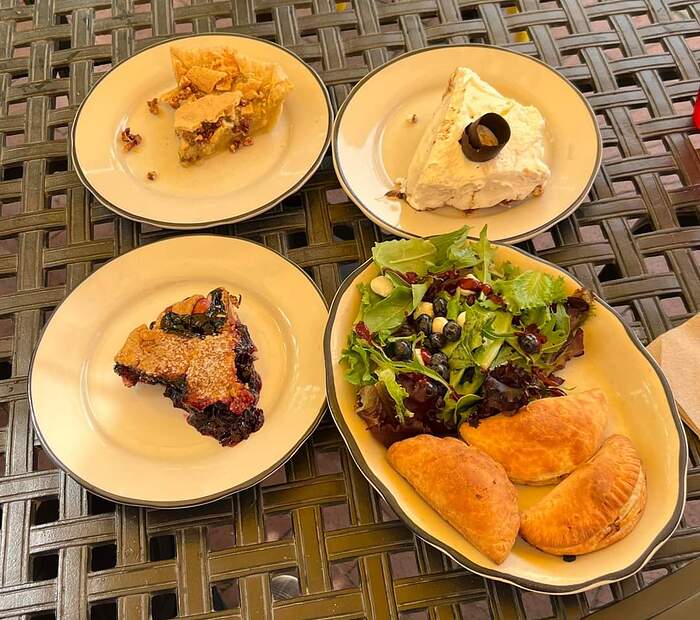