Since I work down that way, i’m always on the outlook for any new places to grab lunch in Harvard Square and as the good choices are somewhat sparse (am I the only one who finds Smoke Shop really underwhelming?) I get tired of mostly eating the occasional Tasty Burger and endless Cilantro lunch specials. (I also love Cafe Sushi, but it’s too pricey for regular visits!).

To that end, when I heard there was a new outlet of the Japanese ramen joint Menya Jiro now open in the Galeria at 57 JFK (side note: do they even call this building the Galeria anymore, or am I dating myself to back when this used to be a movie theater?) I decided to check it out on Monday for lunch.

Menya Jiro originated in Ibusuki City in southern Japan, so the ramen is Kagoshima style–meaning that the broth is a mixture of pork and chicken stock. For my first trip I just got the straight Kagoshima (light) bowl with no accoutrements, so it came just with scallions and bean sprouts and pork chashu. Overall, it was pretty darn good–the pork was maybe just a little fatty but the broth had a nice balance + wasn’t too overly salty. Good flavor, bouncy noodles cooked just right, and toothsome tender pork added up to a well made bowl.

The decor is a little generic but OK, and they have the classic ramen counter but you can’t really see the kitchen when you sit there & that is sort of a bummer. They also clearly were having some growing pains, as there was much confusion over the point of sale system and the servers didn’t seem to have their responsibilities all worked out. But it’s only been open a week, so that’s all forgivable.

They have a richer Ibusuki broth available and both spicy and vegan options as well. I think they make a handful of other items, I saw someone ordering what looked like karaage chicken and they might have some rice bowl options. But the ramen is likely the way to go and it’s really respectable–I much preferred it over Santouka, the other Japanese based place in the Square. I’ll sure go back to try the richer broth and see how well they handle an onsen egg. Happy to add this to my lunch rotation. 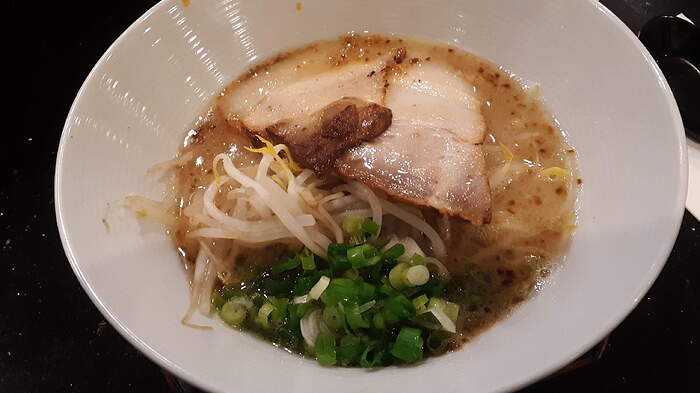 I will eat ramen 9 times out of 10 in the face of other options. As I was reading, I wondered if Santouka was still open in the Square, which you answered. Thank you for this promising new intel.

I haven’t tried Menya Jiro, thanks for checking it out. How does it compare to Tsurumen?

I also love Cafe Sushi, but it’s too pricey for regular visits!

I had previously checked out the menu and thought it looked pricey at $20+ for a bowl of ramen for an egg added. That’s actually more expense i’ve than the sashimi lunch donburi from Cafe Sushi.

oh, Tsurumen is def. better than Menya Jiro! the chashu especially is a cut above at Tsurumen. But Menya Jiro is pretty respectable in general.

And I guess that’s fair about the price–but me, when I go to Cafe Sushi I can never resist getting their seaweed salad and ordering a bunch of maki and it inevitably costs me north of 30 bucks.

@passing_thru, may I ask why you preferred it to Santouka? Better broth? Better pork? Better beansprouts?

may I ask why you preferred it to Santouka?

in general, the broth was better balanced than at Santouka, and I also thought the noodles were more properly made at Menya Jiro. (The noodles I got at this first try were just perfect). I have also found the broth at Santouka to be a bit saltier than I like, which is sort of surprising as I love salt.