As you approach the market from a few blocks away, you notice smoke bellowing from a building. No, its not on fire. That’s the smoke Michoacan Produce Market is sending out from their vents to demand you to roll down your car windows and savor the mesquite grilled chicken goodness wafting through the air. It is making you salivate and beckoning you to stop, drop your dinner plans and eat pollo al carbon instead.

You parked. The smell is getting more intense in the parking lot. In fact, if you stand there or if your car windows are rolled down for 15 minutes, you and your fine ride too will smell like the pollo al carbon. Which will make you a very desirable walking billboard for the market that sells this bird. It is this lovely chicken and charcoal smell that draws you into the market. Yes- your feet do the thinking for you.

The ~2.5 pound chickens are spatchcocked and cooked on a giant grill on top of charcoal. You order at the butcher counter, the man makes a few chops with his mighty cleaver, boxes up the sides and you pay at the register. This bird looks at the boxed, mushy, bland roasted chicken from Whole Foods, Safeway, Calafia, and other fancy markets, yawns and tells them that they are in the Division 3 high school basketball when it comes to takeout chicken. This is the big league, the Golden State Warriors of takeout chicken. And you don’t have to skip your mortgage payment to acquire this desirable bird. Get two if you are feeling like a high roller.

This chicken tells you that it sits in the flavor spa, brines and marinates itself so the flavors penetrate deep into the meat. The flavors are balanced, and awesome. This chicken also tastes like chicken, which should be the minimum that all chickens should hold themselves to, but most don’t in the sorry state of chicken this country is finding itself in. Its not some dry, bland chunk of breast meat that is a sorry excuse for chicken. Those bring to mind big ag’s ‘accomplishment’ in creating the biggest mass of franken breast meat that tastes like $2/ lb of dineros down the toilet. This meat has texture, a springy texture that is a pleasure to bite into. This chicken doesn’t tell you stories about what farm it hails from, which pasture its hanging out in during the day, and that its air dried. This chicken just demands your respect by tasting good.

Apologies that the fine folks working there had to put up for a few seconds with this gringo’s pathetic attempts at Español because the place is so Mexican that it seems a little impolite to order en Anglais. The man at the register asked this gringo why he took pictures and whether he was posting about this online. Satisfied by the enticing meal, this gringo is happy to oblige. 7 paragraphs of ink a little much for the humble takeout chicken you say? Perhaps. But who else is going to write that, unless the grandma who owns the marinade recipe gets her ass into a Michelin *** kitchen or someone convinces David Kinch to do a Thomas Keller impression and have his own chicken joint?

It is later found that Mary, @rwcfoodie and others wrote about this chicken more than a decade ago. Whoah, it could use more love.

Why is this address in Menlo Park you ask? Is Google Map messing with you? You won’t find the answer here. But this little stretch of land, sandwiched between a very Latino stretch of Middlefield in Redwood City and the hyper rich Atherton, really belongs to Menlo Park. And this parcel is at least a couple of miles from the ‘real’ Menlo Park. Did the mayor from Redwood City lose a bet? 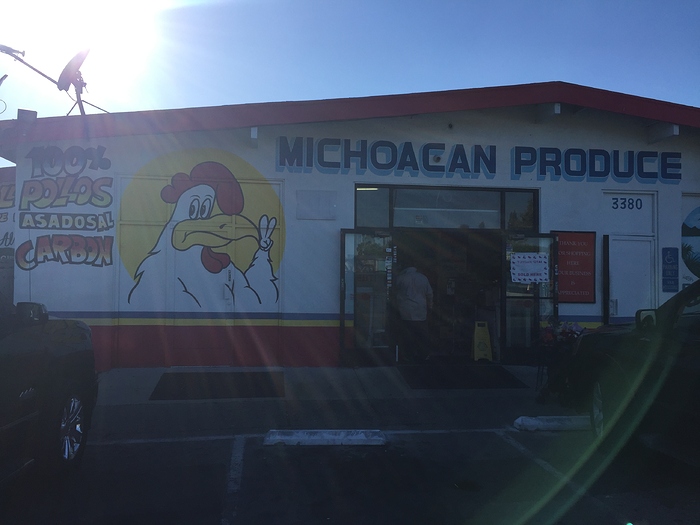 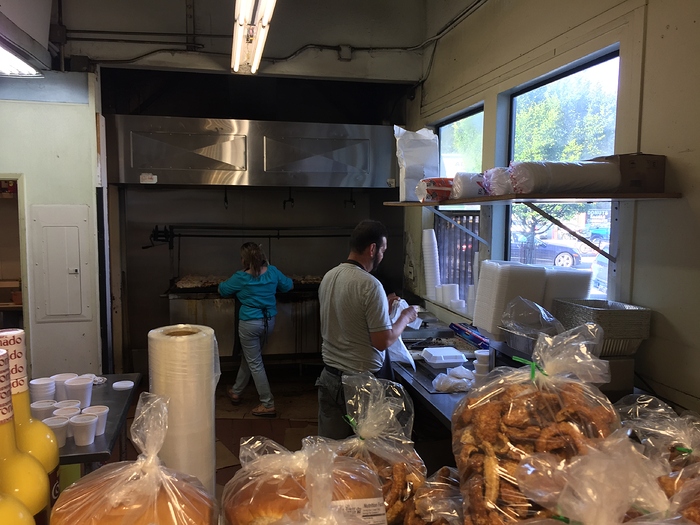 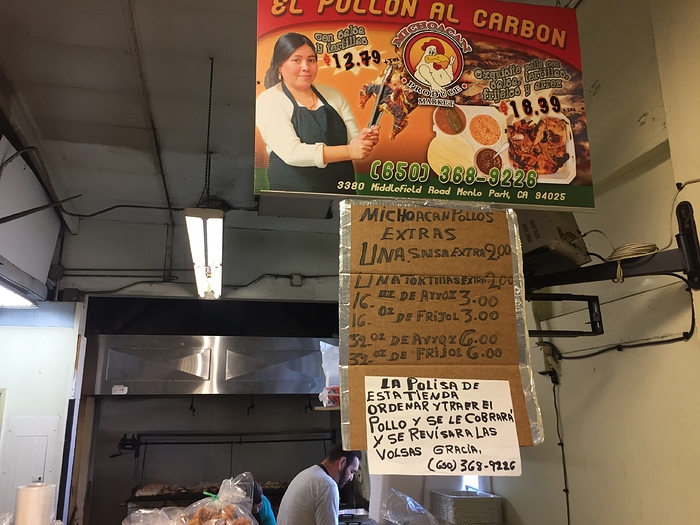 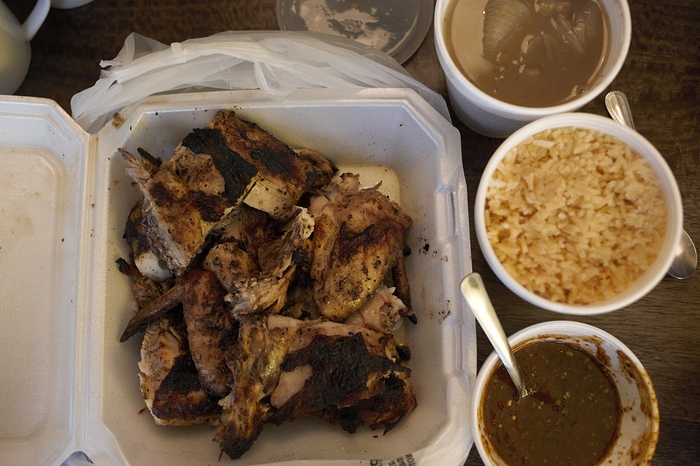 sck, now I am racking my brain trying to find a reason to go to Menlo Park from Alameda in the next few days. Thank you for the chicken seduction! I have been adrift ever since Zaki’s in Berkeley closed, taking their out of this world rotisserie chicken with them.

Mi Pueblo has a decent Pollo al Carbon too. In EPA

Ah. I never tried Zaki’s so I wouldn’t know how Michoacan’s compare. But even if Michoacan’s isn’t out of this world, its still pretty darn good for those of us who live around here, unless we are willing to go through the trouble of marinading/ grilling/ baking our own with a more costly bird.

I’d love to hear other feedback on supermarket rotisseries from Draeger’s, Mollie Stones or other charcoal grilled chicken in RWC whom i haven’t bought before.

Thanks! I’ve never tried cooked food from Mi Pueblo EPA after I got scarred by some lousy tamales from Mi Pueblo Mountain View years ago. Some day I will give the chicken there a try. If you ever got the chicken from Michoacan, I’d love to hear how they compare.

I have had the grilled chicken from Mi Pueblo in Oakland, which I presume is the same. The flavor is good, but I found them overcooked (even when I convinced the griller to give me one that was a little less done.) Honestly, I would rather have El Pollo Loco, if fresh off the grill.

We tried some charcoal grilled chicken from a bodega up in Sonoma (cant remember which one, it was a few years ago) and it was oversalted, overcooked, and dry.

We tried some charcoal grilled chicken from a bodega up in Sonoma (cant remember which one, it was a few years ago) and it was oversalted, overcooked, and dry.

I can’t see the grill and the charcoals at Michoacan from far away, but they probably used some techniques to tune the heat down, like moving the some coal to the side or burning the coal almost to ashes first, to keep the bird moist and cooked just right. If the coals are too hot and heating the bird directly, I am guessing overcooked and dry will be the result.

That stretch of Middlefield is home to a number of stand-out joints, and I’ve not tried enough of them myself. I continue to love Casita Chilanga (the one one middlefield) and their Tesoro.

That’s good to know. I must have driven past the place a gazillion times but never aware that they got chicken inside the store. One more reason to go there besides Back-a-yard.

That stretch of Middlefield is home to a number of stand-out joints, and I’ve not tried enough of them myself. I continue to love Casita Chilanga (the one one middlefield) and their Tesoro.

Another place I want to try are the Michoacan specialties from Taco el Fogon across the street from Michoacan Produce Market- tacos al vapor in a clay oven from Michoacan, birria during the weekend, and morisqueta. I think I may go there this weekend.

Well how done a chicken is depends on how long it sitting in the steam table I think if you get one fresh off the grill it will be better. I just read the Mi Pueblo ad today and the chicken is on sale for 9 dollars. I have dinner meetings Friday when I w ill pick one up and try but is anyone else can beat me to it then they can report back. Otherwise I will do that after Friday.

I tried to get one this weekend around 630pm but the lady told me they sold out. Its not on the menu. I suppose they aren’t permanently not selling it any more?

GI went to Michoacan around noon on Thursday. Plenty of chicken! I got a whole chicken with only the salsa and tortillas, and really enjoyed it! As soon as I got in my car I grabbed a bite of breast meat, which was as tasty as described. I admit that I wished it was a. A little more moist, and 2. A little less “carbonned”, to mangle a word. Next time I would probably be bolder about asking for one straight off the grill, with a little less blackened bits. But all in all a great tip! I loved that while eating the piece in my car I was surrounded by workers in their trucks, gobbling up chicken with gusto.

Try it and found the taste was good but not as Michoancan. Also to dry for my taste in the white meat, ok in the tights. I think I need to make my own now that the weather in better.