My first taste of Neil Perry’s cooking was some time in 1994 when he was invited by Hilton Singapore to run a week-long Australian food promotion. He was then touted by the Singapore media as “the Zeus on the Mount Olympus of Australian cuisine”.

Many of us were not really acquainted with Neil Perry’s inventive cooking, fusing Asian flavours subtly into modern-Australian cuisine, at the time. Frankly, all we noticed back then was his pony tail. Rock star-like celebrity chefs were still a decade away. Neil Perry, in many ways, was ahead of his time.

I first dined at his iconic Sydney restaurant, Rockpool, the following year - in 1995. What I experienced there then was an epiphany - the taste of those yabbie-filled raviolis, infused in the gentlest possible way with ginger, and lifted by a drop of mirin (or maybe Shaoxing wine?) still stayed in my mind today, more than 20 years later. Rockpool showed me the kind of fusion cuisine I’d not experienced anywhere else in the world at the time.

Much has changed in the culinary world since. In Melbourne, as in any other major Australian city, creative & talented chefs are experimenting with fusing flavours from across different culinary cultures. And Rockpool is just one of the boys.

Subconsciously, I think the only reason I stepped into Rockpool Melbourne was perhaps to see if they had something close to that amazing ravioli dish which had made such an impact on my taste memory.

Rockpool Melbourne is located on a nice, busy spot in the Crown casino complex, with expansive views across the Yarra to the CBD. 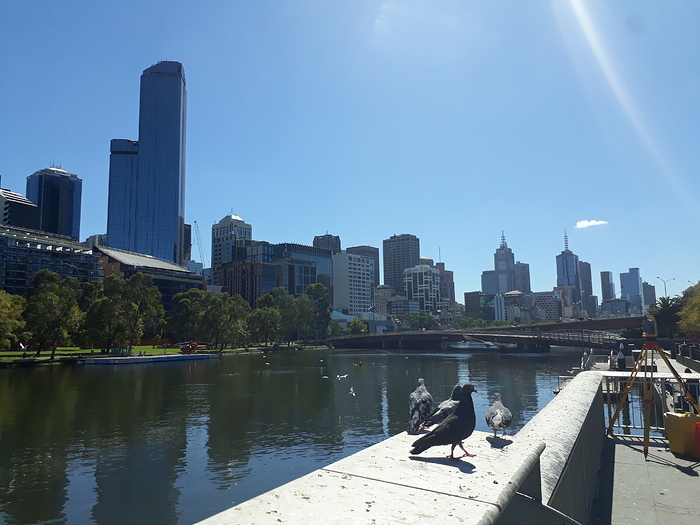 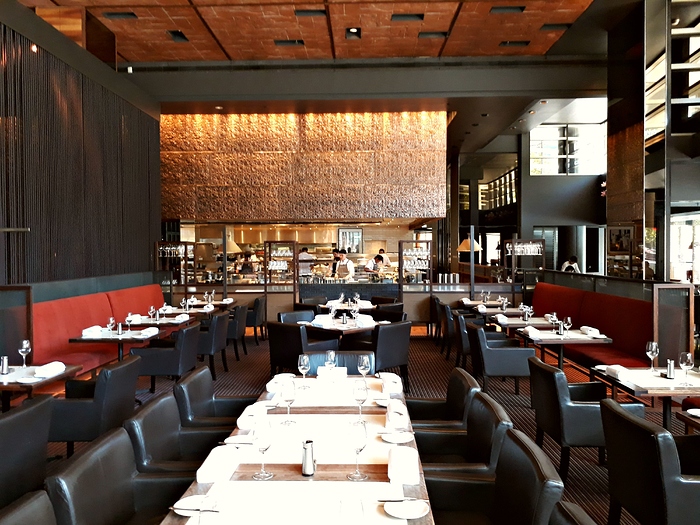 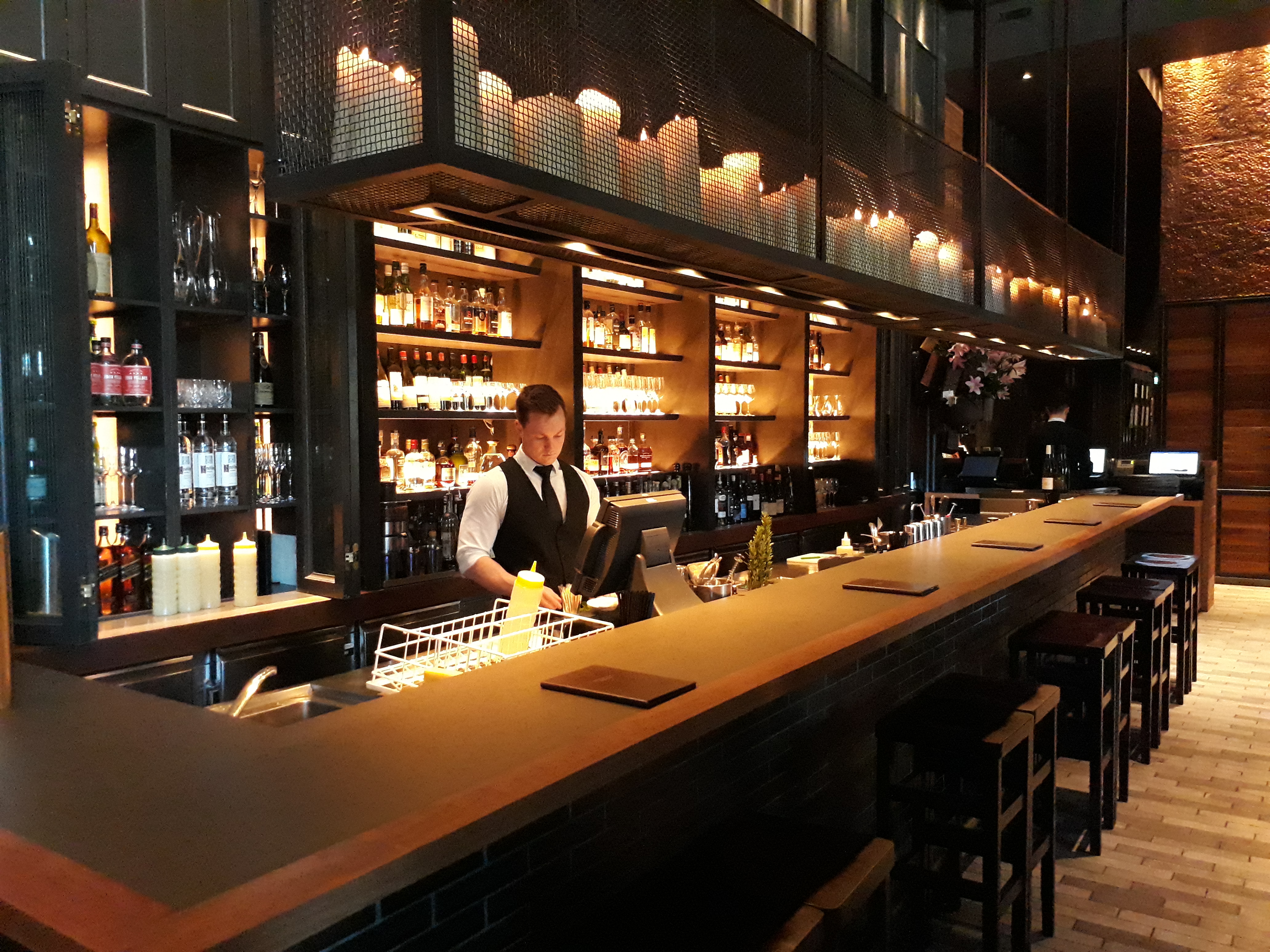 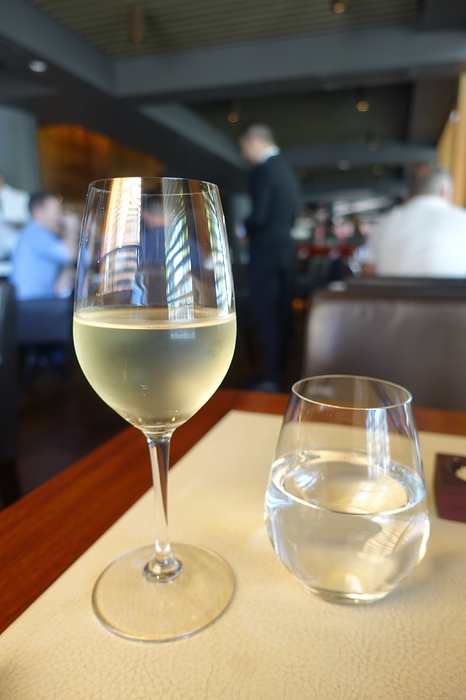 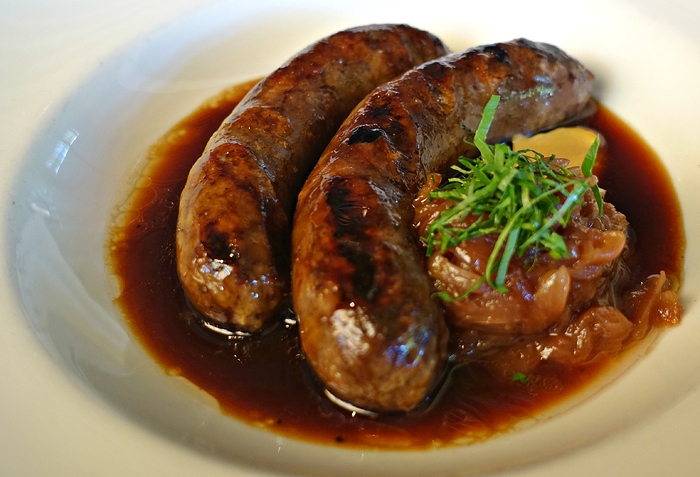 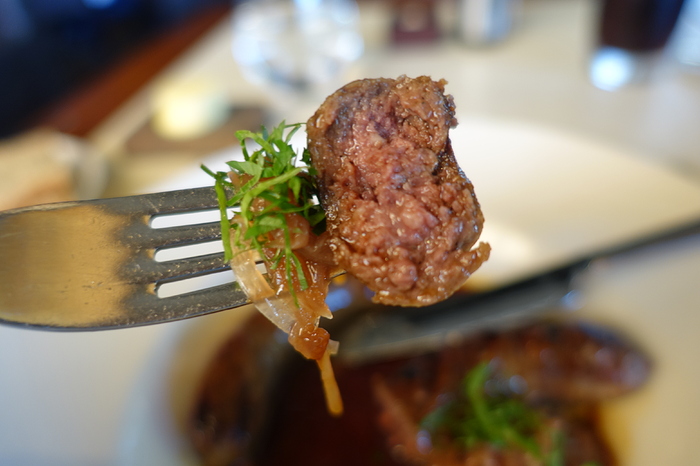 Hand-cut Linguine with Spanner Crabmeat & spicy Prawn Oil. Typical of Neil Perry, who likes to work Asian flavours into his Modern-Australian cooking, there were strong notes of lemongrass and kaffir lime leaves in the pasta sauce. A bit too assertive for my taste, I’d have preferred if they dialed down the Thai flavours. 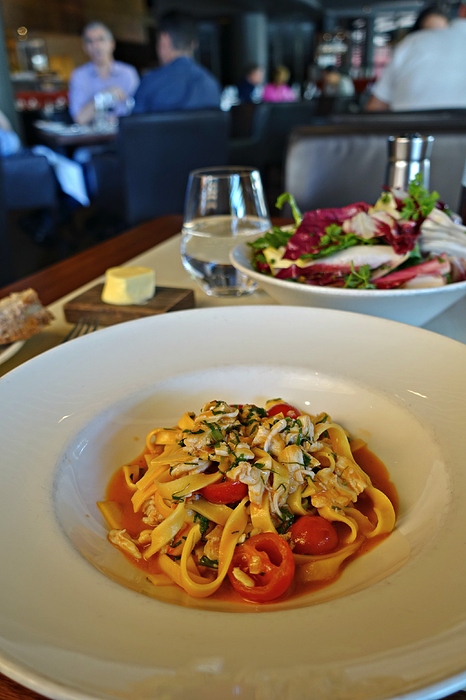 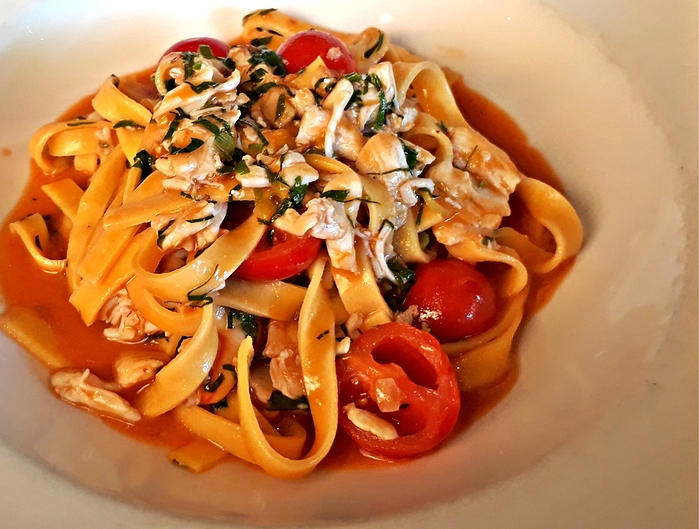 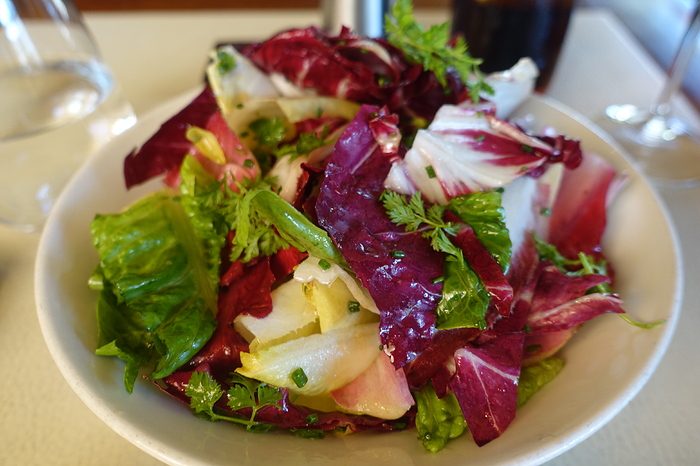 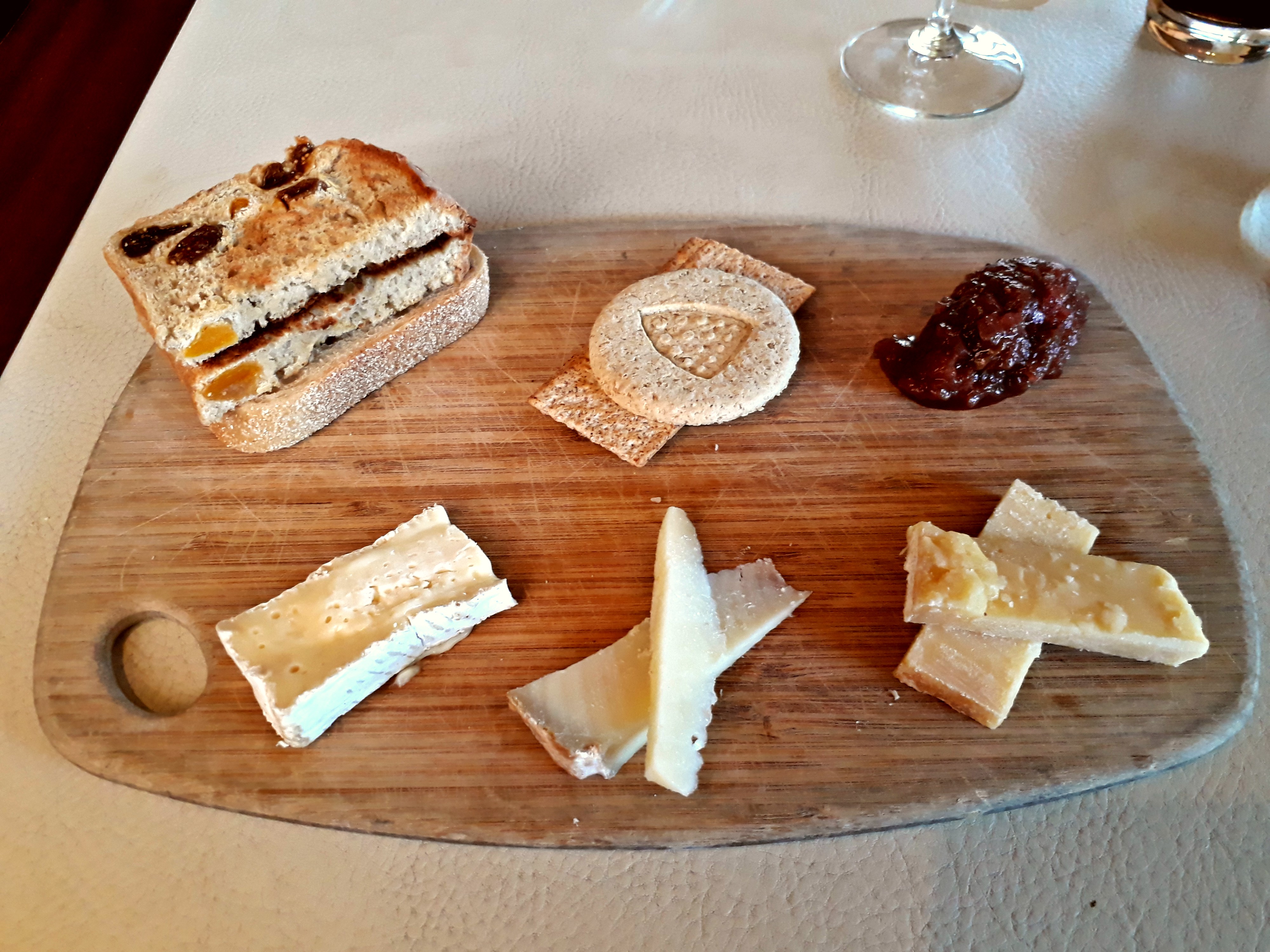 Probably need more visits to conclude on what I think of Rockpool Melbourne. But based on this one experience, I have the impression the cooking lacked the finesse and class of the old Rockpool which I really liked in Sydney all those years ago.

Peter - its wise to remember that RB&G is a very different beast to the old Rockpool. Perry opened RB&G as an large upmarket steak restaurant in Sydney but kept Rockpool itself as the fine diner. He then expanded the RB&G to Perth and Melbourne casinos.

The menu is based around the grill, the steaks, and (*used to be based) around David Doyle’s (US billionaire) extensive vintage wine collection.

Perry is still with the group opening and running the restaurants (I went to the new Bar Patron last night - it rated pretty average). He does keep one restaurant where I think you will find that old essence of East/West fusion, its his homage to good Cantonese food, and his USP is that no one in Sydney was really doing top quality Cantonese food - I have not been yet but have it on the list.

And as you are in Melbourne try and get into Ryne - old school with a light touch by one of Melbourne’s well regarded food heroes Donovan Cooke (Est Est Est) - give him a call and he may cook his famed pigs trotters as a special order.

He does keep one restaurant where I think you will find that old essence of East/West fusion, its his homage to good Cantonese food, and his USP is that no one in Sydney was really doing top quality Cantonese food

I did hear about that one, but then I do wish that Neil Perry will stick to his own, unique style of cooking, rather than turn to “authentic Cantonese”.

And as you are in Melbourne try and get into Ryne

Ah, I missed that! Just have to make another trip back to Melbourne soon. Though I want to go back to Sydney, and Perth before that.

So much good stuff in Melbourne - we are hoping to spend the whole of August down there instead of heading to Europe. I reasoned to my wife that a deep exploration would be as rewarding as eating in many European cities.

but then I do wish that Neil Perry will stick to his own, unique style of cooking, rather than turn to “authentic Cantonese”.

I agree - but these days his new role seems less about cooking than managing the delivery in lots of restaurants and opening lots of new concepts.

I think the Cantonese focus is aimed at the influx of Chinese tourists and residents - Sydney was packed over CNY. I believe I read somewhere that he thought none of the local places were offering the exceptional quality that great Cantonese food deserves.

I think the Mainland Chinese actually outnumber the locals in some parts of Melbourne. Announcements at the Melbourne airport, and in major department stores like Myers and David Jones, are done in English … and Mandarin!

He’s right about there being no good Cantonese in Sydney - even the much-heralded Golden Century falls short. I, for one, will not be seeking out Cantonese food in Sydney or Melbourne (I’d rather have a meat pie.

). But I guess the restaurateurs know where the money is coming from.