This recently-opened restaurant was mentioned in Tablehopper as having garnered early praise on Yelp. I visited for lunch. The Yelp reviews tended to mention how clean the place is, and this is certainly true. 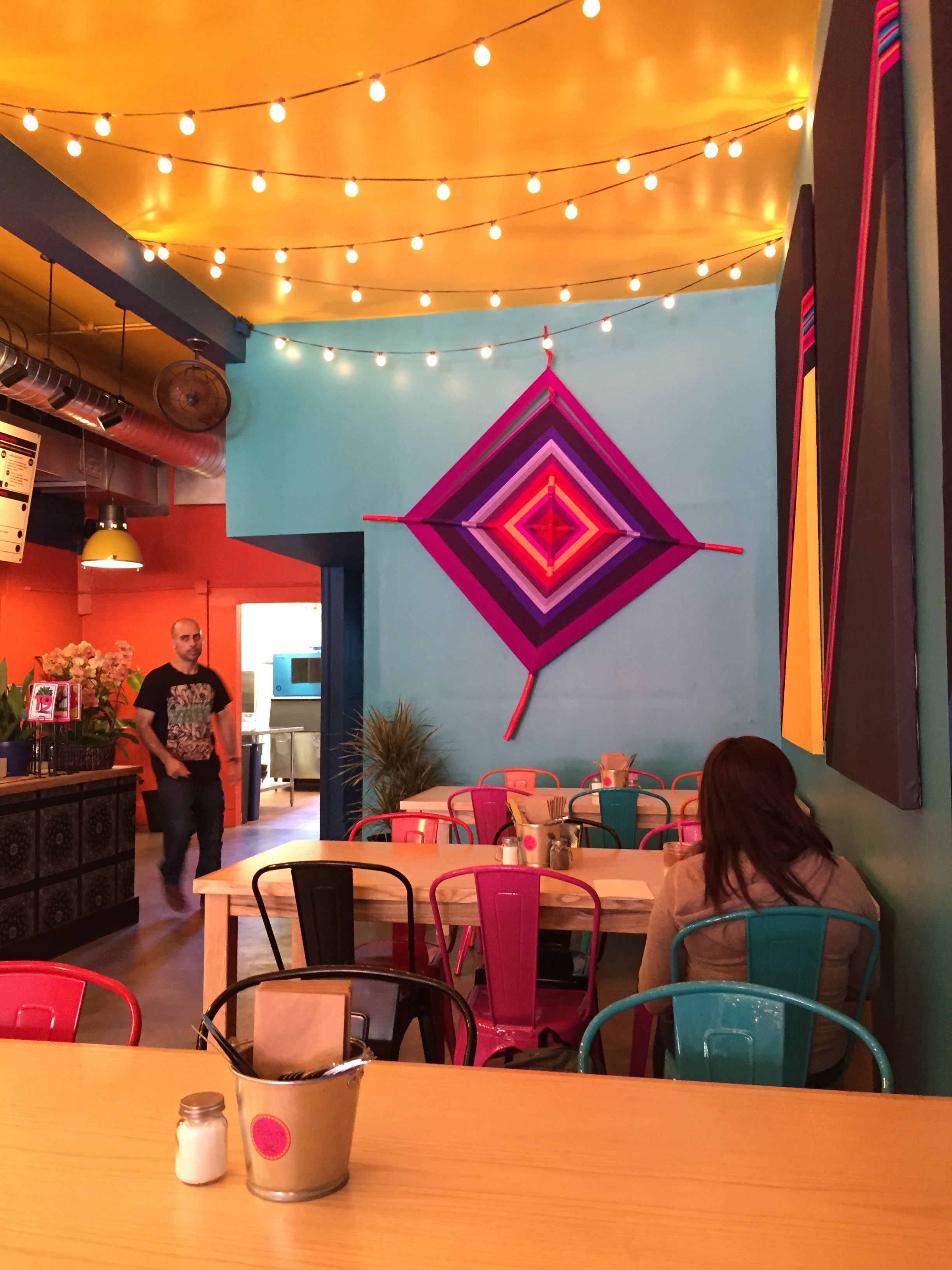 One orders at a counter beside an open kitchen, and is given a number to take to the table of one’s choice. Food is delivered. 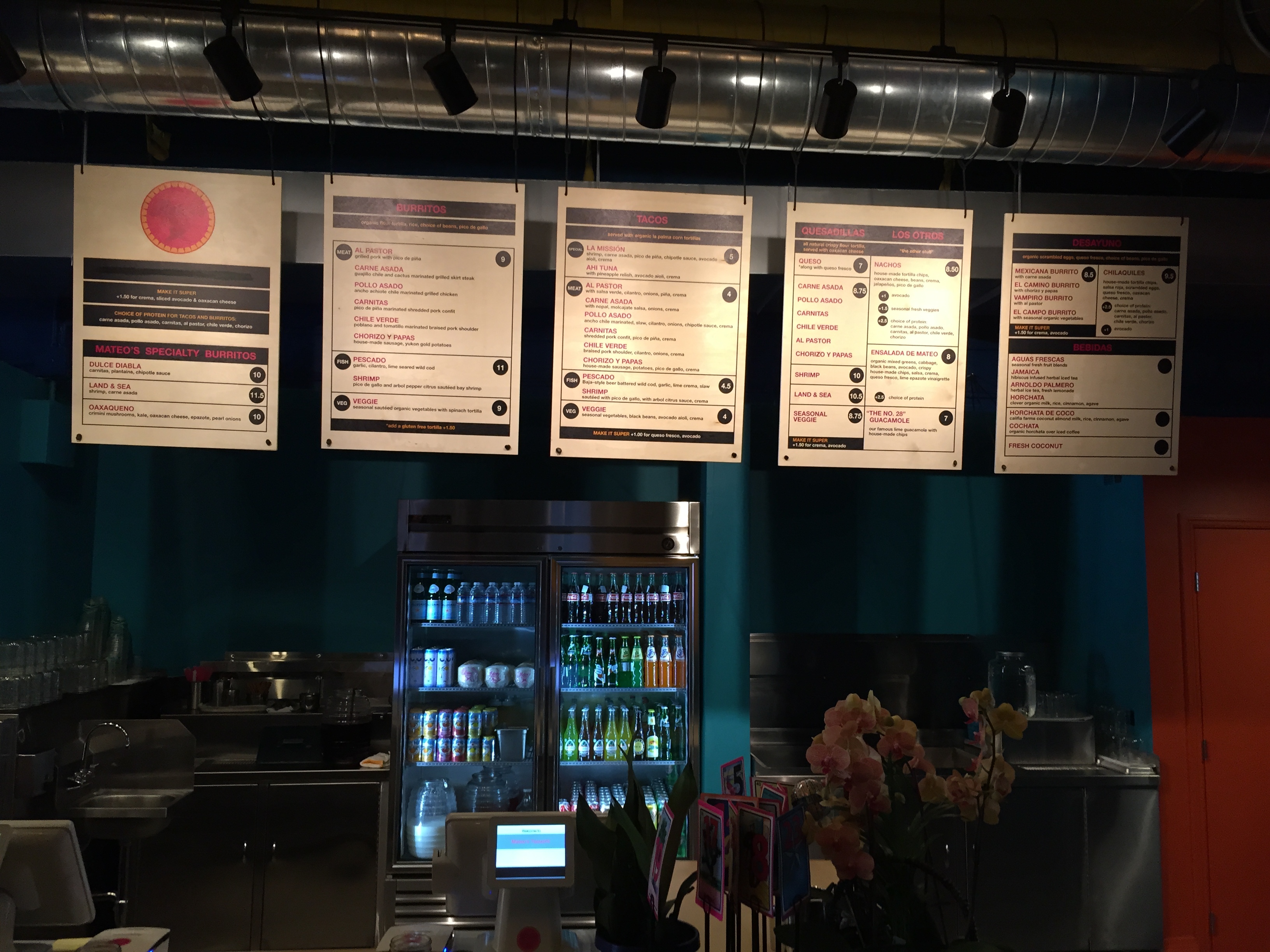 I ordered two tacos ($4 each) and horchata ($3.50), which was given to me with my number. The horchata was presented nicely, and wasn’t too sweet, but was slightly chalky. 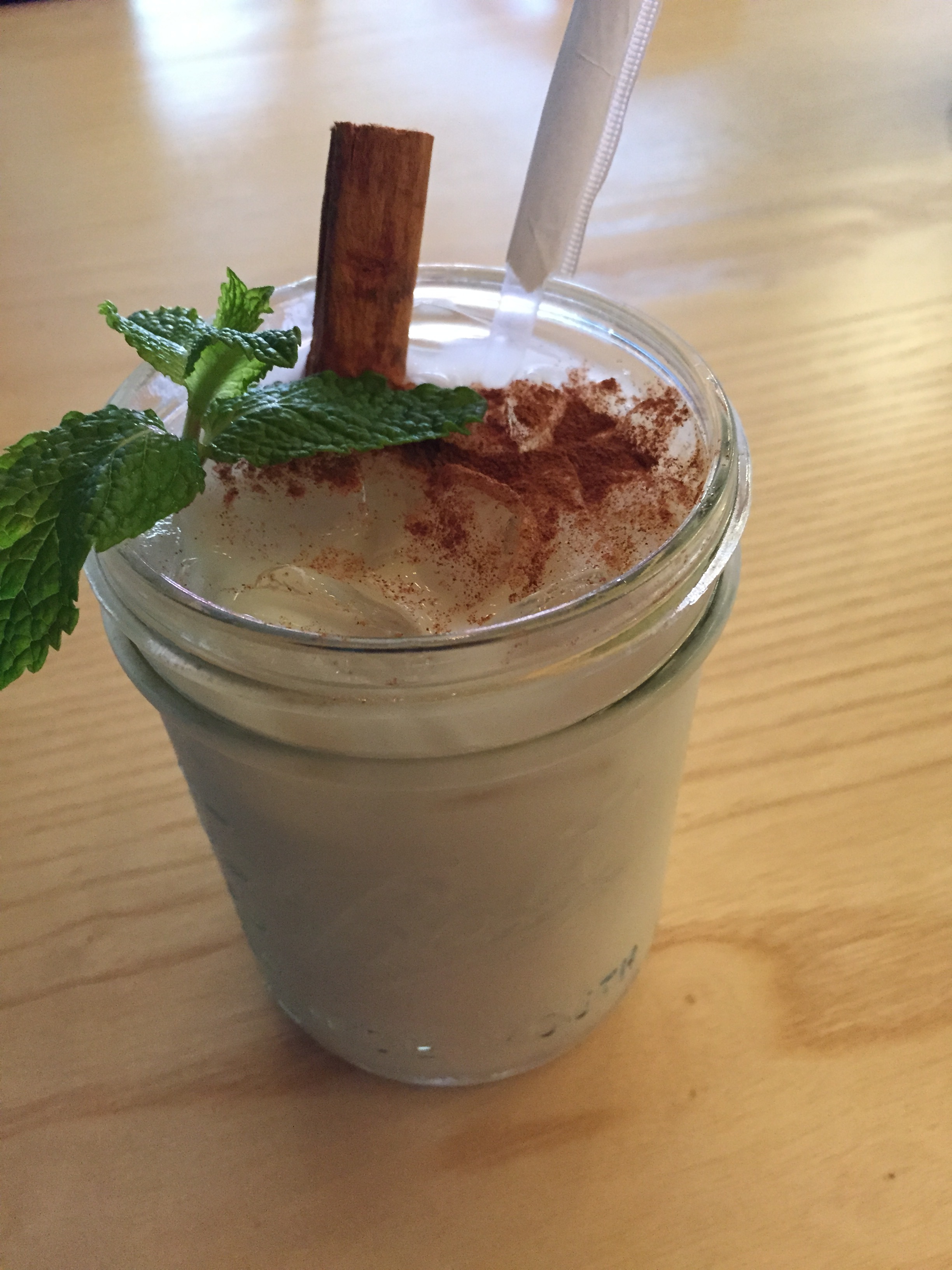 It was a bit before noon, so my food did not take long to arrive. 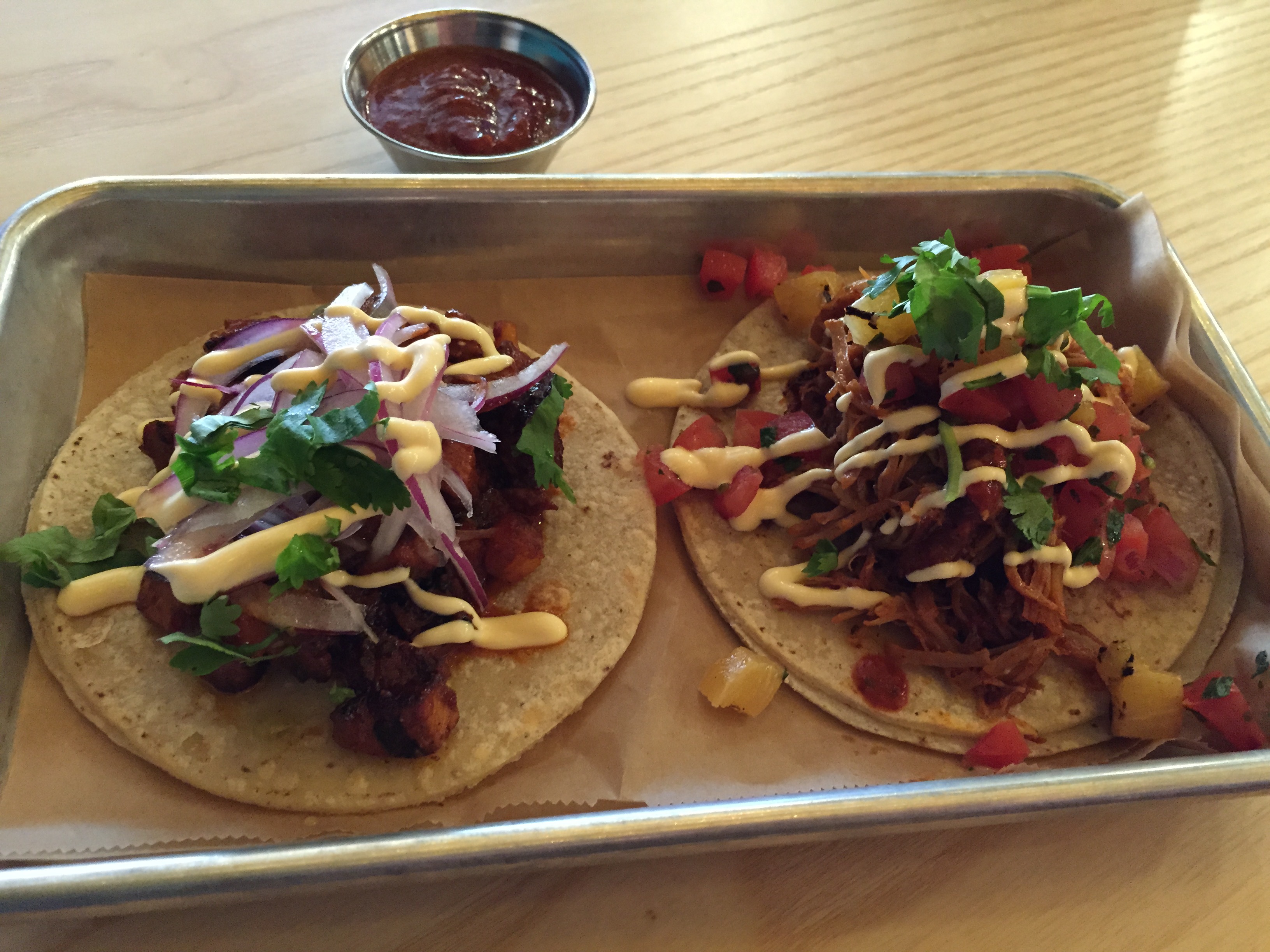 The al pastor (left) was primarily diced pork and diced pineapple. Spicing was understated, and the meat was a bit chewy. The portion was generous, but I couldn’t separate the doubled tortillas without tearing them, so I kept them together, and half the filling ended up on the tray, from which I finished it with a fork. The carnitas (right) were more like pulled pork in preparation and texture, and curiously, also contained diced pineapple. Salsa roja (top) was quite disappointing; it tasted like marinara sauce. When I finished, I was full, but unsatisfied.

The large party at the next table talking about Ruby, the JVM, and databases gave me a clue as to the likely audience for this place. This may be the future of the Mission if current economic trends continue, but as long as lower-rent places with better food survive, I’d rather patronize them, even if my feet stick to the floor. Or, for half the price, I can have food twice as good at the nearby El Gallo Giro taco truck, even if some of it ends up on my shoes instead of on a soon-to-be-spotless-again table.

Horchata looks good. Sometimes the chalky texture comes from the ground rice, so even though I don’t like it, it sometimes signals that the horchata is made in house rather than poured out of a gallon jug. So far my favorite horchata is at Nopalito, theirs is a little chalky too.

Too bad the food sucked. How will this place survive amongst the stiff competition?

I agree that in-house horchata is better. Best I’ve had recently was at Tacorgasmico on Market near 17th, which wasn’t chalky. As for Mateo, I think the atmosphere will take them a long way, and maybe the food will improve. I’ll be willing to try it again in a few months if reports are good.

Is this related to Mateo’s Cochina Latina in Healdsburg? Which we loved btw.

I haven’t seen any hint of a connection.

We loved this place and will be back. I had the fish taco, which was as good as any i’ve had on the streets of Rosarito Beach or Ensenada. Only thing i didn’t love was the bit of mango in the salsa for the fish - i don’t like sweet in my tacos. I also had the mar y tierra - surf and turf - and also really liked it. the carne asada was very flavorful and the two big fat shrimps were perfectly cooked. the BF had the carne asada burrito and loved it, and he’s pretty picky. I thought the space was clean, bright, and lively. Their hot sauces were good and fresh, and the habanero one packs a wallop, and i love heat. (i agree that the red one isn’t great, but the green one is very good.) good fresh chips, too. i had a jugo de jamaica which was wonderfully refreshing. i definitely left full and satisfied.

i understand that the place is owned by six young friends, and at least two of them were on-site when we were there. They were warm, friendly, welcoming, eager to please and to answer questions. They seem to be very proud of the fact they’re using organic food and local vendors, but i got no sense of hipsterism nor boastfulness from either of them. there’s going to be a back patio and a beer & wine license.

i’m a huge fan of all the old school taquerias in our neighborhood, and frequent them often, but i think this a welcome alternative in the mission. 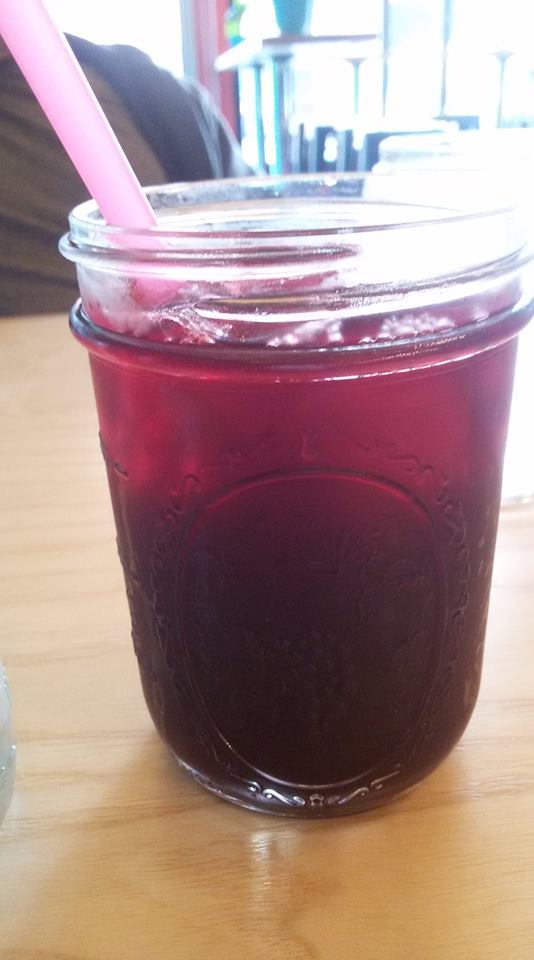 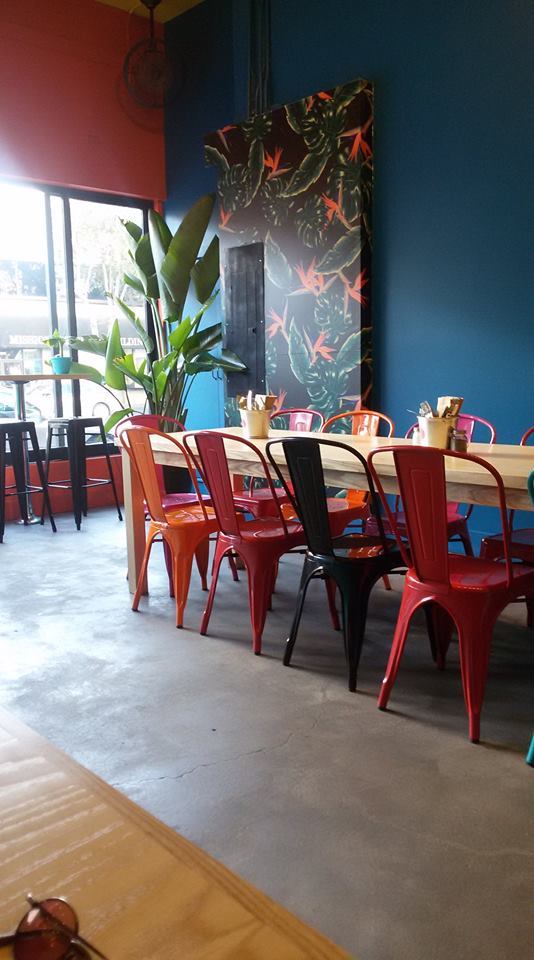 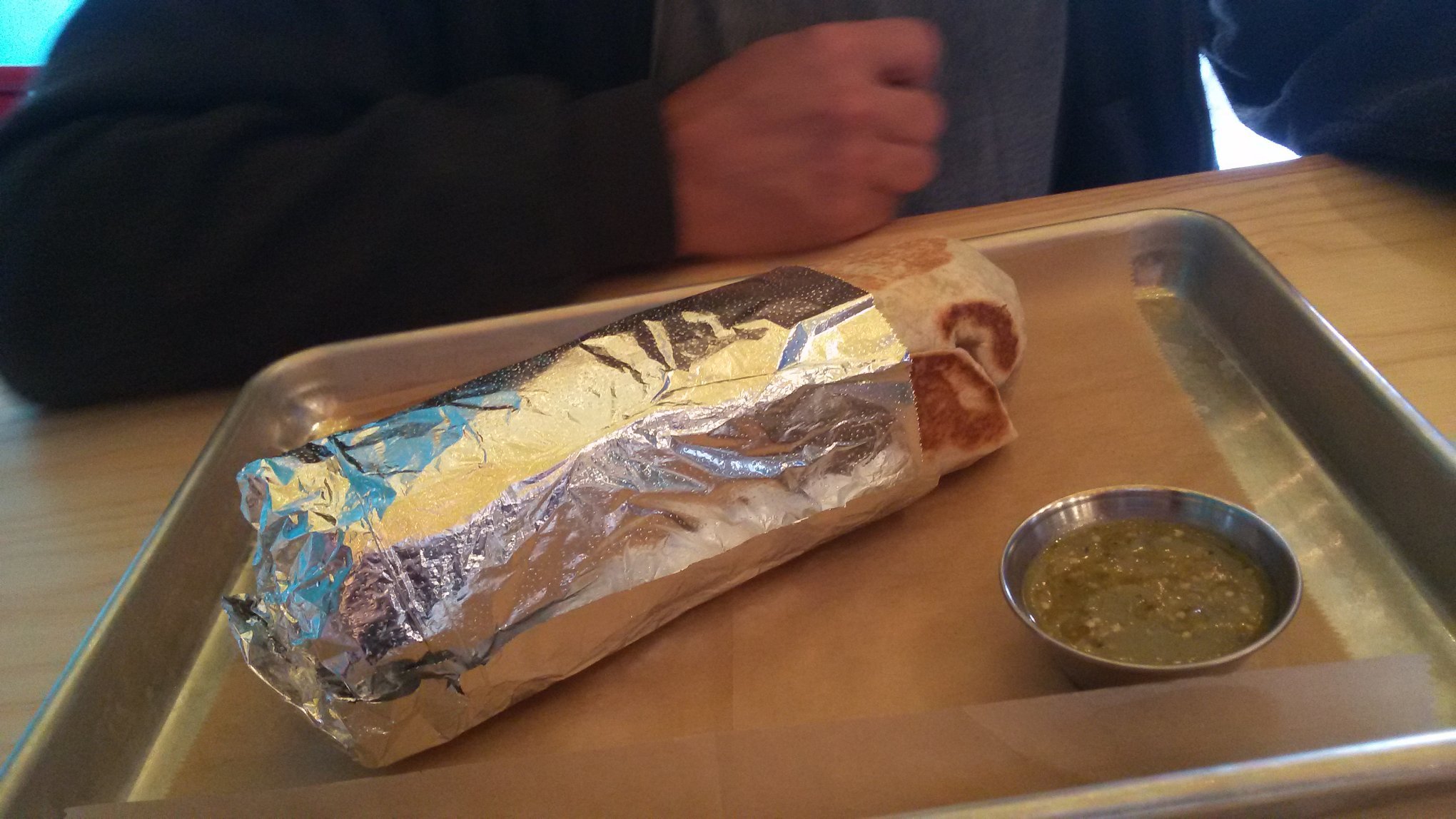 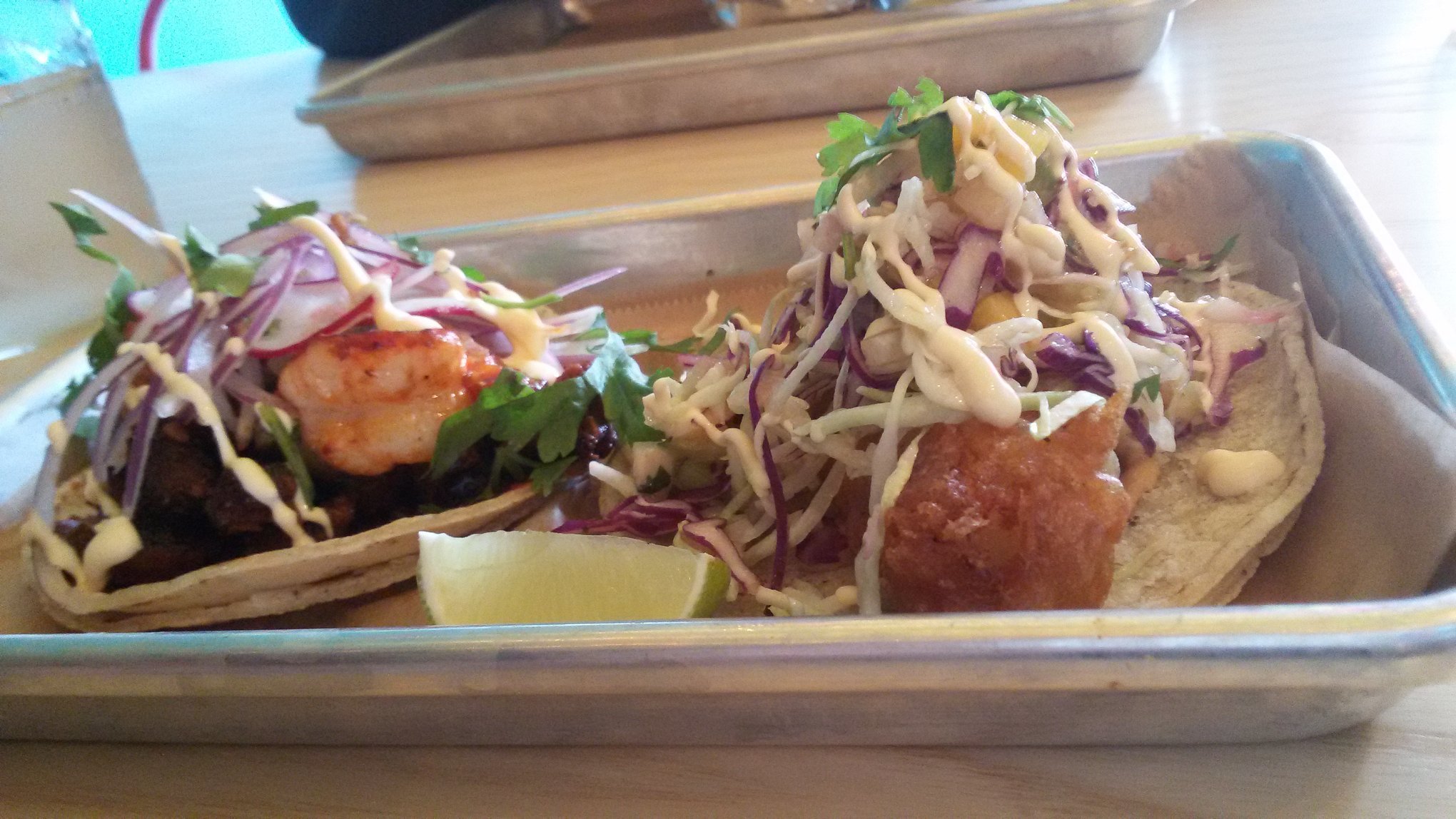 maybe! or maybe we just have different tastes! your opinion is as valid as mine. but I’m glad you posted about that place, as I meant to and hadn’t gotten around to it.

We ordered completely different items, except for the red sauce, which we agree on. I’ll try the place again in a few months.

plragde - i wanted to let you know we went back and i agree that their al pastor was a little bland, although i liked the chewiness of the meat. the BF had it in his super burrito this time and it could not hold up to all the other ingredients.

the carnitas i had were in the plantain quesadilla and were quite tasty, seasoned with chipotle in this dish. i didn’t mind the shredded texture, and there were some bigger pieces. overall i didn’t love the plaintain quesadilla, but i bet i would love the mar y tierra (carne asada and shrimp.)

the chorizo taco i had was delicious - house-made, it is chunkier than you usually see, and it was really well spiced. i would definitely go back for that.

i had the horchata and found it really tasty, refreshing, and fresh tasting, and only a tad chalky. not in any way off-putting though.

and it turns out we like the red sauce ok, though it’s not our favorite (i was thinking of red sauce at another Mission taqueria that really tasted like tomato sauce to me, just a couple days before we went here the first time.)

guac was very good too - creamy but with chunks, not too limey.

just wanted to give you my second impression. not 100% this time, but still somewhere I’d come back to. 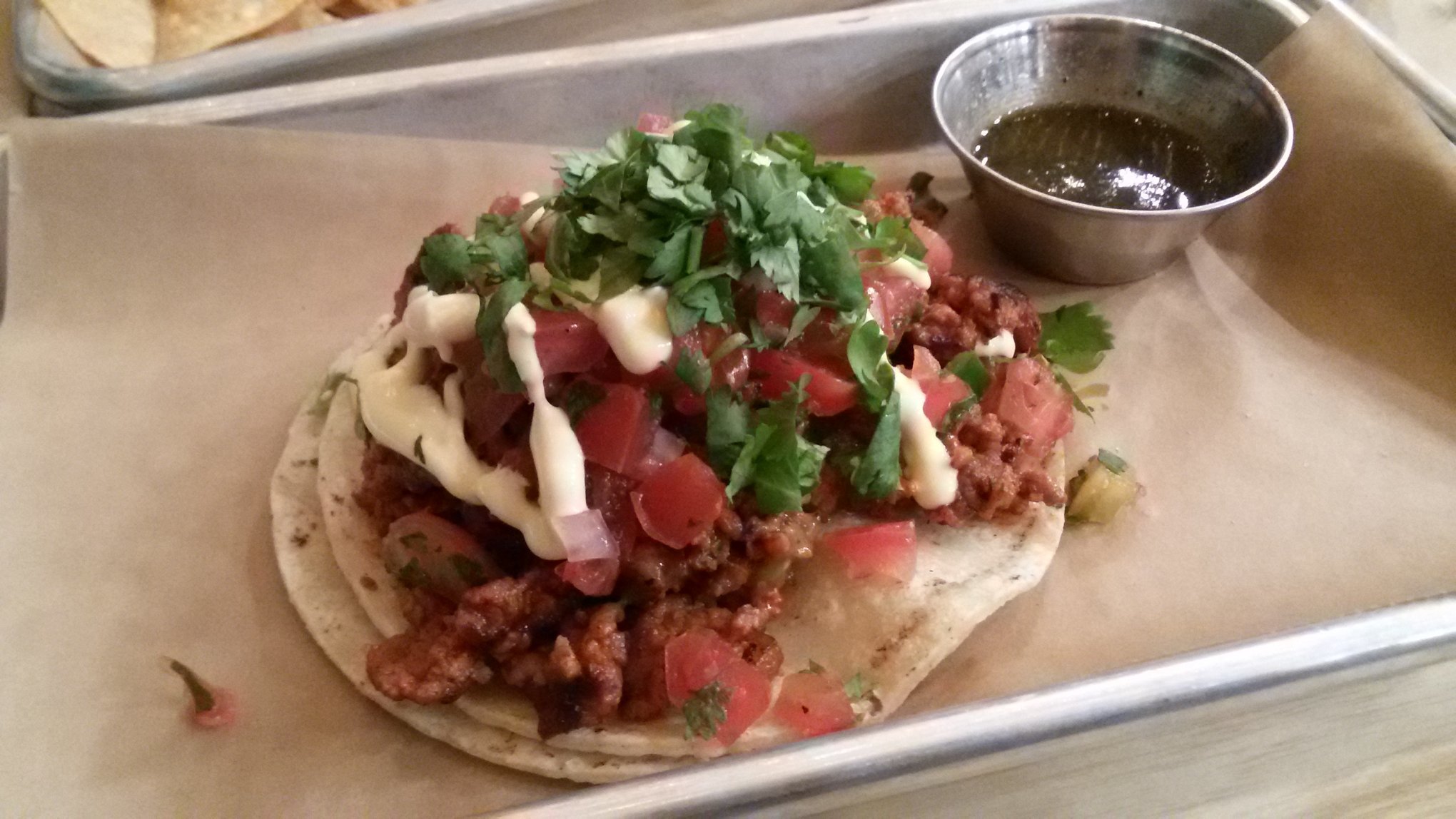 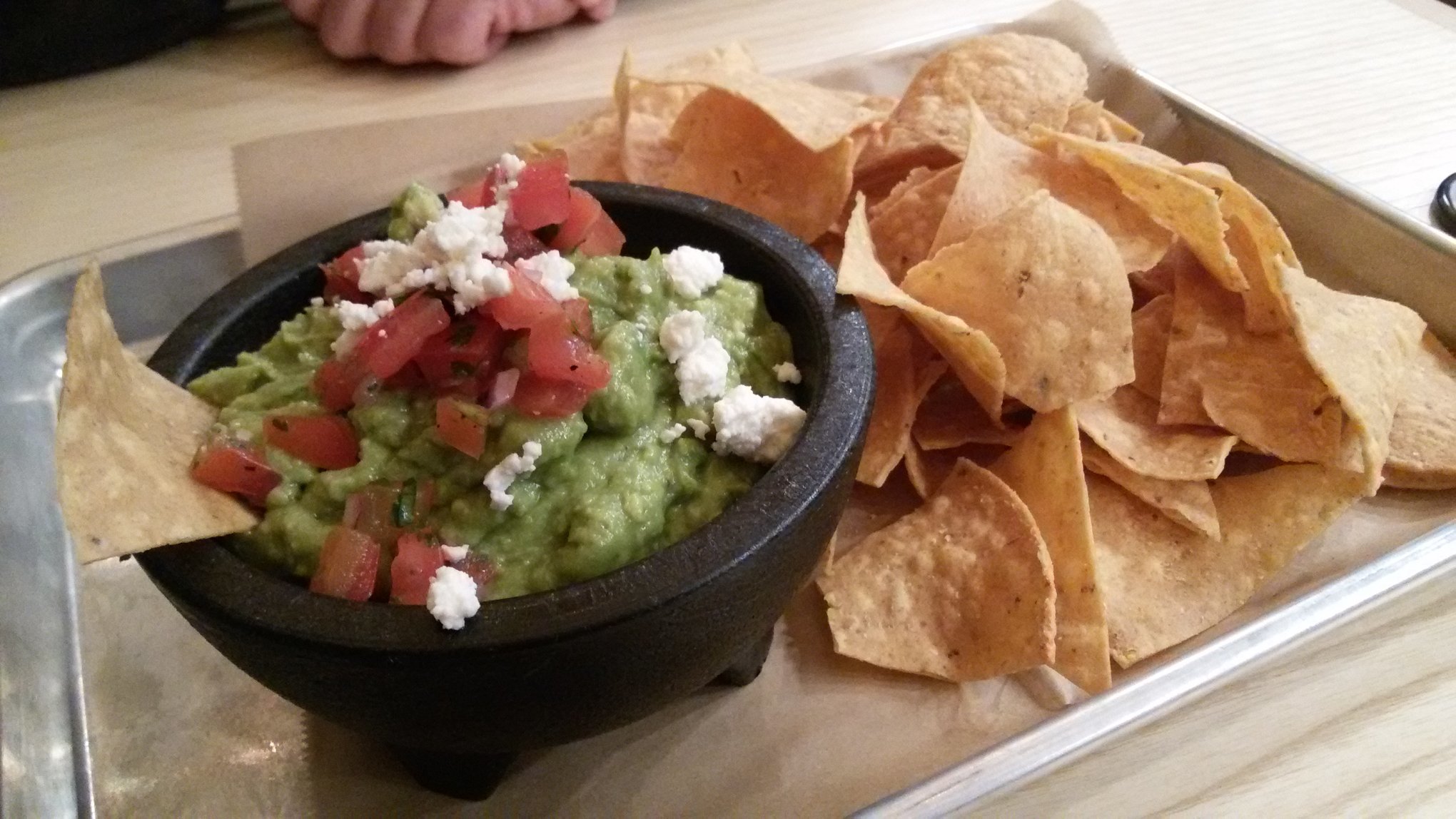 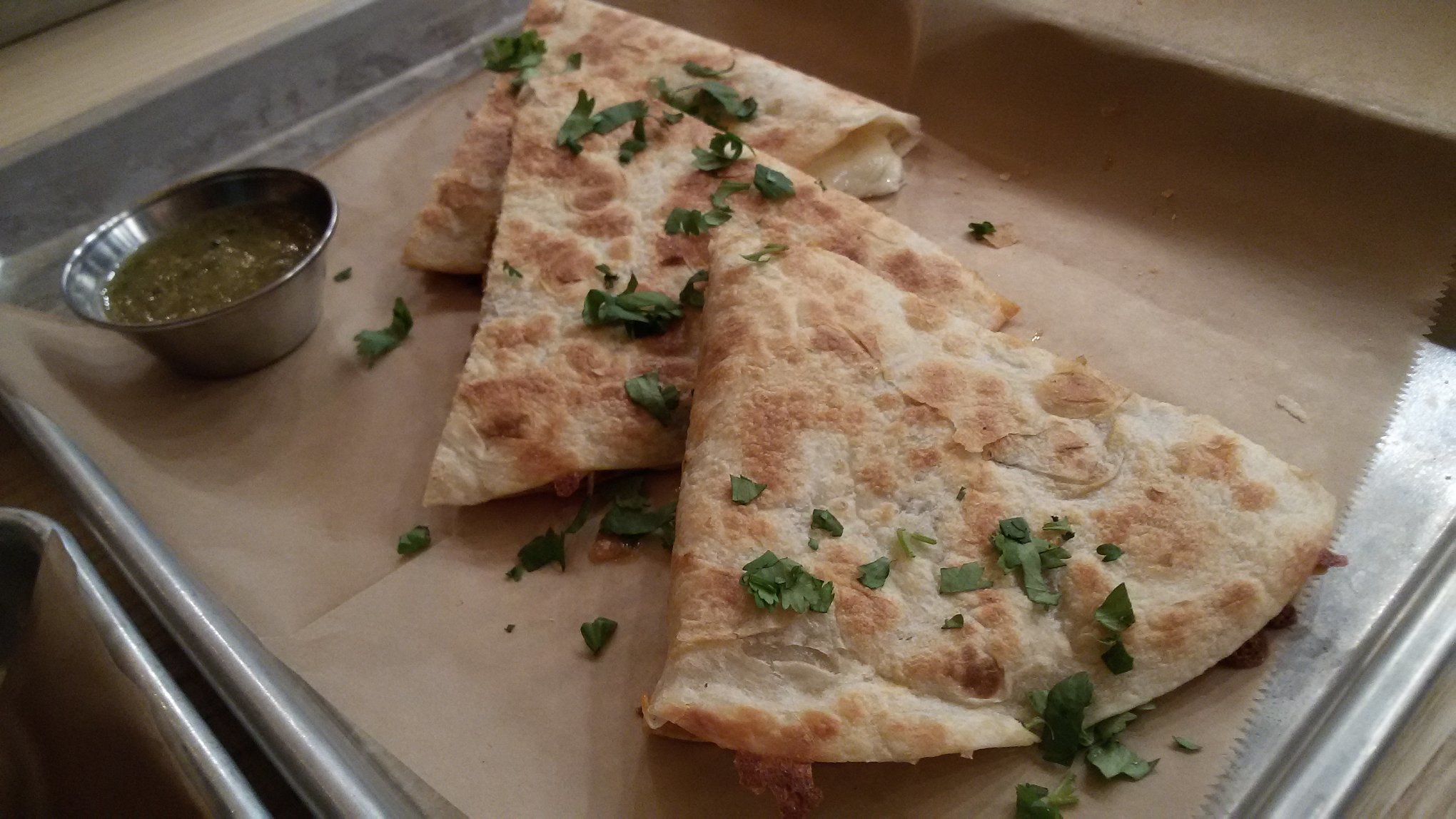 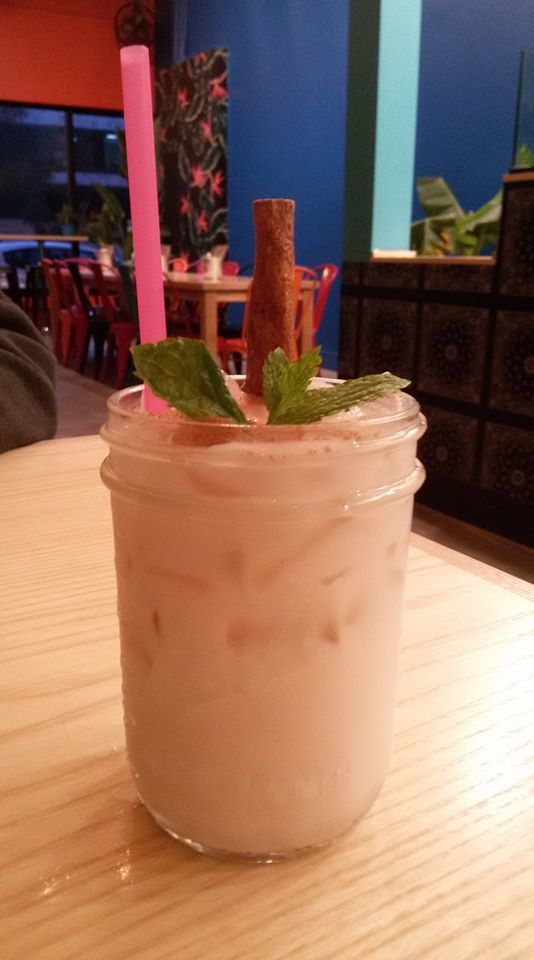 Thanks for the update! I will select from your favourites next time I try this place.

Wow, that taco looks HUGE!!! And good. Thanks.

Hey, The guy “Mateo” that’s shown in the top picture of this article is actually Maher Muhawieh. Google his name and you will see that he ran a ponzi scheme here in San Francisco and ripped off a bunch of his own community. He just was released from Fed Prison last year. How is he able to afford a place like this Taqueria?