Yes, I know it’s getting tired and formulaic, but I’m still looking forward to it.

We used to see the program on BBC America and I loved watching it. Since this is a brand new version I can’t help but wonder when we’ll get it here. I did try to view the trailer but it’s not available outside the UK, as usual. [insert pouty face here]

I’ve never seen the BBC Masterchef on Netflix, but maybe one day…

What impressed us was how different the cooking is from what we see on the other Masterchef versions. It is
getting very tired, John. They should come up with some new ways of doing things.

Yes, we usually record the show, too. On some of these cooking programs that are on 2-3 times a week, we sometimes just record
the Friday night programme. I think we did that with Masterchef Professionals or maybe it was more likely to have been Great British Menu.

No, it’s not a real journey.

I really hope they don’t bother with another Great British Menu. The first couple of series were good, with top notch chefs but it has become dismal. We started just watching the Friday one but gave up completely on the last series.

Oh, yes… they can do something better than Great British Menu. Once the top UK chefs were demoted to judges and didn’t do the cooking, it really became a different show.
Did I read that a new baking/patisserie bake off type program is beginning this year?

That reminds us that “Come Dine With Me” hasn’t been on for a while.

Did I read that a new baking/patisserie bake off type program is beginning this year?

This is it. Tom Kerridge as host? He best not sample the wares if he wants to keep the weight off. 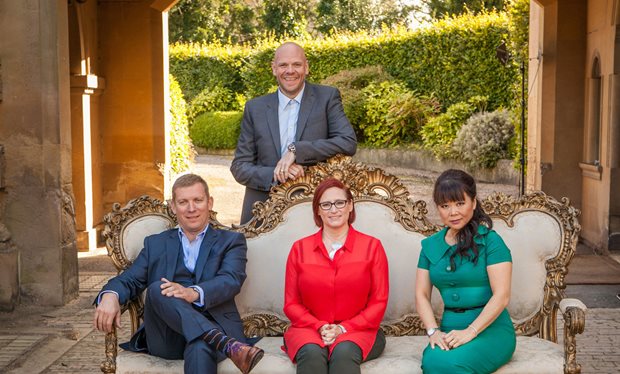 Former Have I Got News For You host Angus Deayton will front the BBC2 series instead of chef Tom Kerridge, with producers promising a "fresh dynamic to the show"

This is it. Tom Kerridge as host?

Tom has dropped a few notches in my eyes with his paternalism and sexism. http://www.independent.co.uk/news/people/tom-kerridge-female-chefs-dont-have-fire-to-make-it-to-top-level-but-girls-in-the-kitchen-i-like-it-9779878.html

Two star chef or not, Kerridge is talking out of his arse.

Apart from Lisa Allen (who is excellent and whose food I’ll be enjoying on Monday), he ignores the other starred or otherwise very talented female chefs across Europe, including the ones in this country. But what he also ignores is the industry’s long term sexism. OK, there are other industries where there is long term sexisim and there are still further ones where glass ceilings exist.

Rather than making smartarse remarks,as quoted, Kerridge would do better lending his undoubted influence to encouraging an equality of opportunity in his industry, rather than promoting the continuance of outdated tosh. I see that article is dated 2014, perhaps since then, he’s changed his mind.

By the by, I thought describing female colleagues/employees as “girls” went out of fashion a couple of decades ago.

Rather than making smartarse remarks,as quoted, Kerridge would do better lending his undoubted influence to encouraging an equality of opportunity in his industry, rather than promoting the continuance of outdated tosh.