Happy Thanksgiving, everybody! My brother and sister-in-law will be in town next Friday (December 3), and I’ve been asked to find a place where we can dine outdoors with one set of cousins. I’m not sure how large the party will be yet, probably 6-7 people I believe, but my brother’s criteria for an acceptable setup are daunting:

(1) It has to be outdoors
(2) There have to be heaters
(3) It has to be partly open (not one of those “outdoor” structures that is really just an enclosed outbuilding with closed doors)
(4) The tables can’t be close together.

Of course, in addition to that, it has to be good (my brother is also a stickler for quality and good service), and money is somewhat of an object (we’re not going to be paying $150/person or something like that; I’d prefer to keep things at $80 or lower including a main and side, one of their cheapest glasses of wine, tax and tip, if possible, with a possibility if my girlfriend can come that we accomplish the same thing by sharing an app and an entree).

I was thinking of walking on 32nd St. to see how things are set up in Koreatown, but I haven’t had the chance lately. But basically, anyplace south of 96th St. or so could probably work, probably with a minor preference for a location south of 42nd St. and north of, like, Chambers St., East Side or West Side - so not too much geographic restriction, at least. I’ll operate on the assumption that my cousins would not consider anyplace outside of Manhattan, because they live in New Jersey and would have to get home after dinner. Another thing is that my brother is likely to refuse to order any salad or vegetable dish that is not made with organic vegetables, so a place that uses organic vegetables is a plus, too.

Any ideas anyone has would be gratefully received! 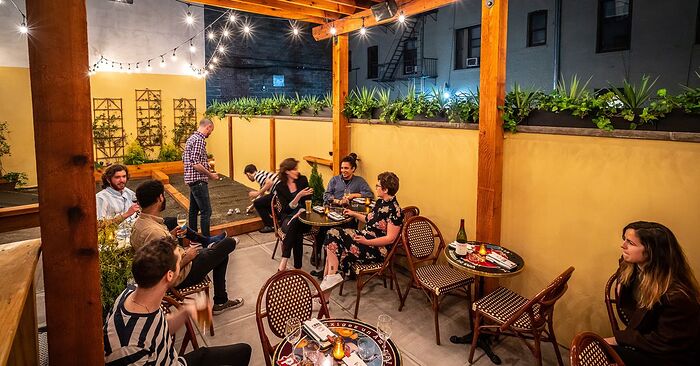 When you’re looking for something a little bit different, check out these 19 outdoor spots.

Thanks for the ideas. I may go with Cafe Katja, which was recommended on eGullet, but in any case, what do you like best at these restaurants? I went to Cafe Luxembourg ages and ages ago but haven’t been to the other two. Empellon’s menu looks quirky in an interesting way, and maybe I’ll go some time with my girlfriend if we don’t go next Friday.

I happened to have lunch outdoors at The Smith’s UWS location last week - it meets all of your criteria, including price point and outdoor seating with ventilation and heating. It was very comfortable outside even on a fairly chilly, windy day. Their food is nothing special but the menu has something for everyone and the service is generally solid.

Yeah, they are reliable. Thanks.

I never did get back to everyone; sorry.

Cafe Katja’s construction of their outdoor space was ongoing, so we ended up at Dudley’s, corner of Broome and Orchard, which is a very good restaurant. They call themselves Australian, but I can’t really tell the difference from New American cuisine. In November and December, they had two really large, beautiful structures that had roofs but were totally open on the sidewalk side, with windows on the other side and good overhead heaters. I went several times, and I definitely recommend the branzino and the Brussels sprouts side.

Unfortunately, when I took my girlfriend there for Valentine’s Day, those beautiful semi-open structures had been enclosed in sliding glass doors, so we had to sit really outside, just outside the outer walls of the restaurant, and in that 22-degree weather, the heater was too high to do much and we were exposed to a lot of wind. We still had a good time, but it was insane, something to laugh about when reminiscing in the future.

A great restaurant that has a lovely outdoor dining setup that’s still open on the sidewalk side and has heaters is Huertas. It’s quite a bit more expensive than Dudley’s and specializes in pintxos, the Basque equivalents to tapas, and like a tapas bar, has a good wine list as well as excellent brandies (the one that’s $20 a shot is really exceptional and worth it). I’ve been there a few times and love the place, but they do close their outdoor area early sometimes. Last week, we showed up just before 9 on my girlfriend’s birthday, and the hostess was apologetic to us.

So we walked across 7th St. and went to Oiji, a somewhat fusiony new Korean place I’ve been interested in since it opened in 2015 but had never been to because it’s pricey. They don’t have genuinely outdoor dining, but each room of their enclosed outdoor structure is completely separate, so we were able to be seated at a 6-top by ourselves, and I felt there was a fair amount of air getting in from outside. They were apologetic about one of their two heaters in the room being out of order, but the other one provided plenty of heat. Our meal there, which cost about the same as meals we’ve had at Huertas (about $188 for the two of us, I think, before tip) was just amazing! Each dish was spectacular, and we also had our first taste of really fine soju (as we have often eaten at restaurants in Koreatown and enjoyed Chamisul, but that’s not special). They told us they are planning to move to a much larger location, where the food will be more luxurious and presumably more expensive. I suggest all of you who would consider a splurge for a special occasion keep tabs on when that happens, and in the meantime, I can’t recommend Oiji enough and feel pretty similarly about Huertas (maybe one dish I had there was just a tad disappointing, but they’re terrific and always make me happy).

Going back to more everyday restaurants, Veselka has a good outdoor dining setup with plenty of seating. Mogador’s “outdoor” dining is really semi-enclosed, inside plastic, but can still be chilly. The big problem is that it’s outside their door, so customers take off their masks and may stand there before fully leaving. B&H has outdoor seating with heaters, but I never do anything except get their lentil soup to go.

It looks like other restaurants I’d eaten at outside in November and December may have stopped doing outdoor dining. Arturo’s told me tonight that they have. Uluh, which is a great restaurant on 2nd Ave. between 9th and 10th that serves several kinds of regional Chinese cuisine and seems to do all of it that I’ve tried, anyway, really well, ended their small outdoor dining program some time after they literally ran out of gas for their heaters.

In November, Barney Greengrass had the same kind of excellent outdoor dining structure, totally open on one side, that Dudley’s used to have and Huertas still has, but I haven’t been up there since then.

All of which is a short way of asking: Do you know any Italian restaurants or other restaurants with good food and wine someone who likes Italian food might be likely to enjoy that charge prices somewhere between Arturo’s and Lupa and actually have dining that’s genuinely open to the outdoors but has heating? (Or if not, at least that have separate outdoor rooms for three people that have some circulation from outside? I’m not sure if that’s OK, though…) There is one place like that that I used to go to: Supper. But they have become really overpriced and don’t seem to me to try hard anymore, so I don’t want to take my cousin there. Restaurants she’s enjoyed are the now-closed Crispo, Lupa, the now-closed Otto and an Italian wine bar on Bank St. whose name has slipped my mind. She lives in Westbeth in the far West Village and I live in the East Village, so I think anywhere from like Soho, maybe Tribeca to the 20s might work, but she may not want to go further uptown.