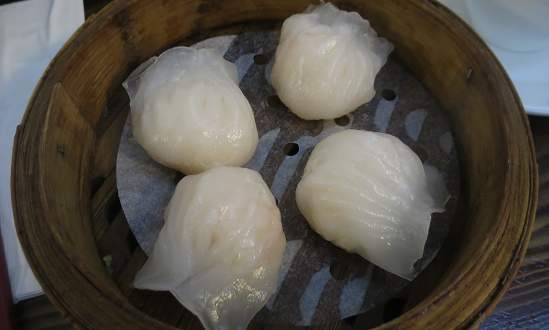 Tim Ho Wan’s shrimp rice roll isn’t as good. The shrimp are smaller and tougher, and the roll is oddly greasy. 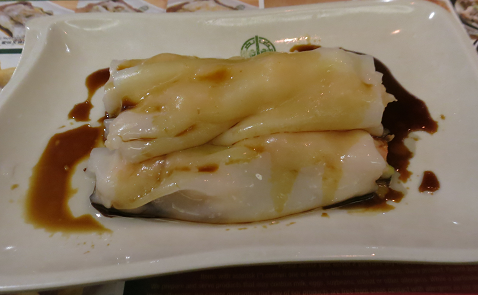 Dim Sum VIP offers a vegetable bun that’s steamed and then fried, for the indecisive diner. It’s ok. It also takes a long time to arrive. The shell is pretty nice, but the filling (not pictured, because I’m sure no one wants to see a bun that I took a bite out of) is mushroom mush, and doesn’t taste like much. 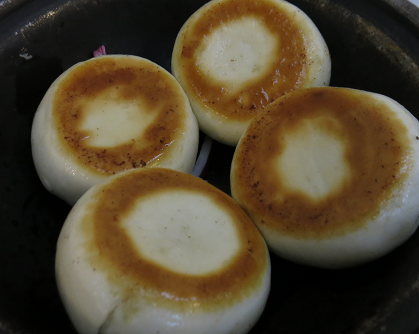 Tim Ho Wan, on the other hand, presented me with probably the best vegetable dumplings I’ve ever had. The skin was glutinous and transparent, the vegetables inside still crunchy and distinct from one another. 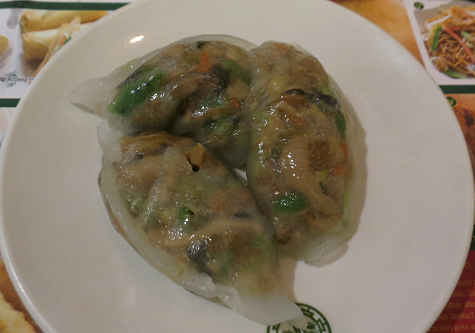 Advantage: Tim Ho Wan. My other concerns are price and comfort and wait time. Tim Ho Wan’s more expensive (albeit not by much), but that’s to be expected what with the Michelin star and the Union Square location. I had to wait only about five minutes at 1pm today - prime lunch hour, but also miserable weather. I went to Dim Sum VIP the day of the Lunar Parade and was lucky enough to race in just in time to score one of the last counter seats. I move fast. Faster than these people. 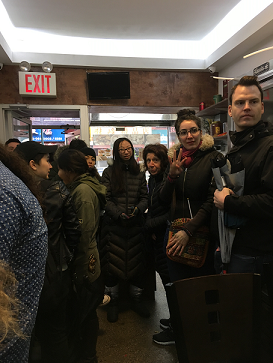 As for comfort, at Tim Ho Wan, I had a table to myself in a quiet part of the room. At Dim Sum VIP, I faced the wall, seated on a wooden stool at a counter about the width of a tea saucer. No contest there, but I still think, all things considered, the two establishments battled to a draw.

I don’t think much of the comparisons. Each item compared was different. Not just their individual takes on say a shrimp dumpling. The items are not similar at all.

Second, comparing a veggie/mushroom filled, steamed then fried bun; to a mixed vegetable dumpling is just as bad if not worse. Both have different wrappers. Both are prepared differently. Both are spiced differently, etc.

Thanks. I have walked pass Dim Sum VIP a few times, but never felt to eat there. Was it good? Tim Ho Wan. I have never been there.

The shrimp dumplings from Dim Sum VIP look to be made quiet traditional. Many restaurants these days use the a slightly different mix and achieve a more translucent appearance (similar to the one you showed for the vegetable dumplings). I actually like this more traditional look. The translucent mix is achieved by using more tapioca starch, and resulting a more chewy texture. I prefer otherwise.

Thanks for your review.

At Dim Sum VIP, I faced the wall, seated on a wooden stool at a counter about the width of a tea saucer

Yeah, definitely not a place you want to take your date to.

However, sometime there is a certain charm to look to a hole in the wall on your own. I think it was very busy because it was Lunar Parade. The few times I walked pass there, it wasn’t quiet as busy.

I would recommend both places. Dim Sum VIP has an abalone and tofu dish that I didn’t see until I was on my way out, so I need to go back for that. And I’ve read good things about Tim Ho Wan’s fried eggplant and shrimp. I don’t mind eating in close quarters when I’m by myself, but it obviously limits how much of the menu I can try at one sitting. Three dumplings is a commitment.

Ugh! I had totally convinced myself not to deal with tim ho wan because their very limited vegetarian options aren’t especially appealing (blanched lettuce??) but those veggie dumplings look really impressive- i would be happy with one or two orders of those alone as a meal.
Hmm. Will have to strategize as to when i can go that doesn’t involve crazy line issues.

I see Dim Sum VIP is on Mott St. It’s nice to have good dim sum options in Chinatown. Do people feel that it’s better than Dim Sum Go Go, where in the past, I’ve found that the dumplings are good but the buns are soggy?

Be very careful. These veggie dumplings can still have trace of meat in them (double check if it is important to you)

The menu puts a “V” next to the vegetarian stuff. There’s no stealth meat at Tim Ho Wan.

Don’t knock blanched lettuce til you try it! I love the stuff.

Thanks for posting this. My friend has been raving about Tim ho wan.

Well huh! I haven’t tried it before but perhaps i missing out!

I know a few places (not Dim Sum VIP) that they use meat in their so called vegetarian dish. For example, I know a Ramen owner, and he was letting me trying his new veggie ramen to get some feedback before launching it. During the discussion, he told me that he was using the same meat broth as all his other ramen.

The other thing is that a lot of people have different definitions of vegetarianism. For example, is MSG vegetarian? Is seaweed vegetarian? Do they have dedicated cookware for vegetables? So I guess it is as much as a question to oneself as to the restaurants.

By the way, I am not bashing Dim Sum VIP.

I love blanched lettuce too… but blanched Chinese broccoli is better.

Anyway, for your link… you have oyster sauce in your blanched lettuce. Definitely not vegetarian.

So true. There is the vegetarian version of oyster sauce (e.g. no oyster is used; instead they use mushrooms). But that is like tofu-turkey, man.

Thanks- and (((sigh))) yes i’m all too aware of non veg stuff showing up in vegetarian dishes so I usually ask enough questions to have a comfort level without hopefully sounding like a total psycho…!
K, so now i’m thinking i gotta try making that blanched lettuce thing myself- i seem to have everything on hand usually, including a vegetarian oyster sauce (and since i’ve never had the “real thing” I don’t know any better, it’s tasty!)