[Manchester] Quick but stand-out meals in the centre?

A question for the (I would previously have said “hounds”, but is the correct term now “onions”?) who live a bit further north than I do.

I’ll be catching the train up for an afternoon meeting, from London to our office in Media City next week. Before and after my meeting I will likely have time for a lunch and a quick dinner. So I’m wondering what’s good between Piccadilly and Salford Quays . Are there any stand-out places that I should visit?

Any type of food, cheapest takeaway to fanciest michelin-rated, I’m just looking some really good cooking. I should have an hour or so, so a quick sit-down meal should be fine, but I won’t have time to dwell for hours.

Thanks for any suggestions!

It’s a seasonally lovely day here, so I suppose I should regard myself as your “spring onion”.

A number of ideas come to mind but, because of your potential time constraints, I suggest you miss out on the city centre’s “big hitters” of Simon Rogan’s “French” and Aiden Byrne’s “Manchester House” (although both do lunch which might be OK)

Almost immediately outside Piccadilly is the Abode Hotel with it’s Michael Caines restaurant. The “Amazing Graze” lunch menu is bang-on

At Media City is Damson. Modern Brit bistro. Their original place in Stockport is one of my regulars but I’ve not eaten at the recently opened Media City place but I’m sure it’d be as good as Stockport.

A few minutes walk from Piccadilly is the Northern Quarter - good area for bars and restaurants. The lunchtime “curry cafes” are a city institution. Originally set up for the asian workers in the district’s garment trade, it does damn good value food for a now mainly Anglo customer base. Think of them as an asian greasy spoon. What you want is the “rice and three” - rice and your choice of three curries from the half dozen or so on offer. Plate costs you about £4.50. Say if this appeals and I’ll reel off more details of recommendations.

Also in the Quarter is the Northern Quarter Restaurant. Another Modern Brit place and a real favourite of mine.

Wonderful, thanks John! Your summary is really helpful. I will report back on which I got to.

I could have sworn I looked at the Amazing Graze menu the other day, liked it, and thought I’d try Abode, but now it seems to have completely disappeared and they only do normal tasting menus or a la carte!

So I think I’ll eat at The French, as their a la carte lunch looks nice. It looks like only a ten minute walk from Piccadilly so should be ok.

In the evening maybe I’ll check out a rice and three place or even just get some buns from Ho’s bakery for the train.

The rice & three places are usually only open at lunch.

You’re right, the Amazing Graze has disappeared. It was there the day I made the suggestion.

Ahh thanks for the heads-up about curry cafes, John. Also I’m glad it wasn’t just me who remembered reading the Amazing Grace menu!

I just noticed that Abode do a Table d’hôte meal in the evening, which looks like it would be perfect before catching the train home. I might give that a go instead.

(If I’m not a bit “fine-fooded-out” by the French at lunchtime, that is!)

If “fine fooded out”, less than 10 minutes walk from the station (on the edge of the city centre) is EastzEast, (decent Punjabi nosh) and, almost opposite, Middle Kingdom (decent Sichuan nosh)

Thanks yet again! I’ll be there next week so I’ll be sure to write up a review of wherever I end up.

I arrived at The French at 12:30, and was the only customer in the lovely room. At around 1PM, another couple of people arrived, so it seemed for the whole lunch service there were only two tables in use. Awkward! The waiter actually apologised at the beginning about how quiet it was and assured me that it wasn’t anything like this empty in the evenings.

Apologies in advance for memory gaps. I didn’t take any notes and menus aren’t online.

First up, a little amuse bouche, followed by a bread roll and butter. Both were pleasant. 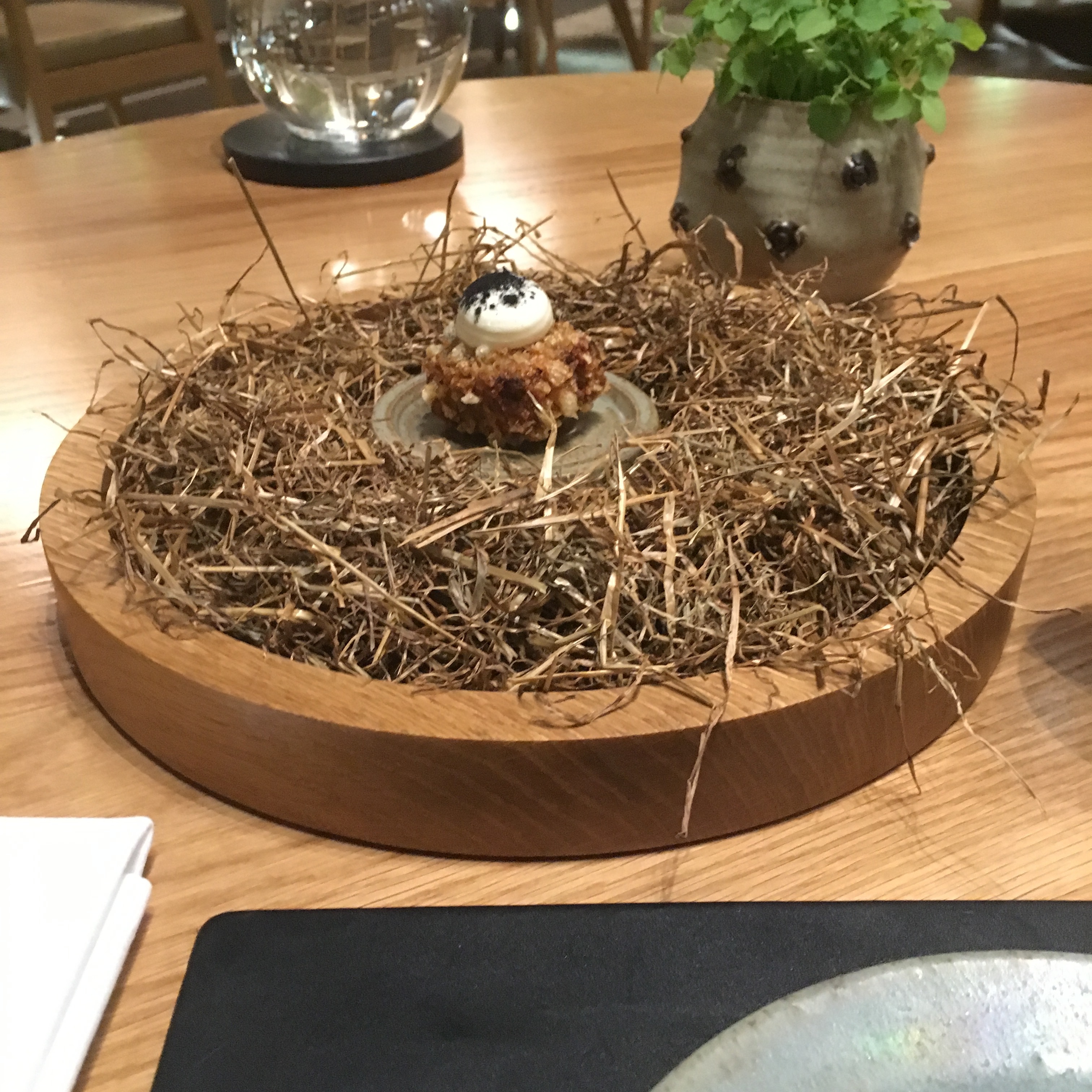 Next my entree, which was (from memory ox-cheek) tartare in charcoal oil. Anyone who has been to l’Enclume will likely be familiar with this technique. It really is quite wonderful, a plate of raw meat that tastes like it has been barbecued. The seeds provided a nice contrasting texture, along with the creamy mouthfeel of the spheres of sauce. This is a lovely dish.

The sommelier paired a biodynamic white (sorry can’t remember details). It was generally pleasant and had a pretty complex profile, with all kinds of different flavours bursting through. Interestingly, it did have a fairly strong “barnyard” scent and apple-peel taste that shouted brettanomyces. I thought this was a no-no, but I’ve recently been served bretted wines in other places, so I’m guessing this must be a recent trend - maybe they’re picking it up from the beer makers? I did ask the sommelier about it, but I’m not sure he understood me. 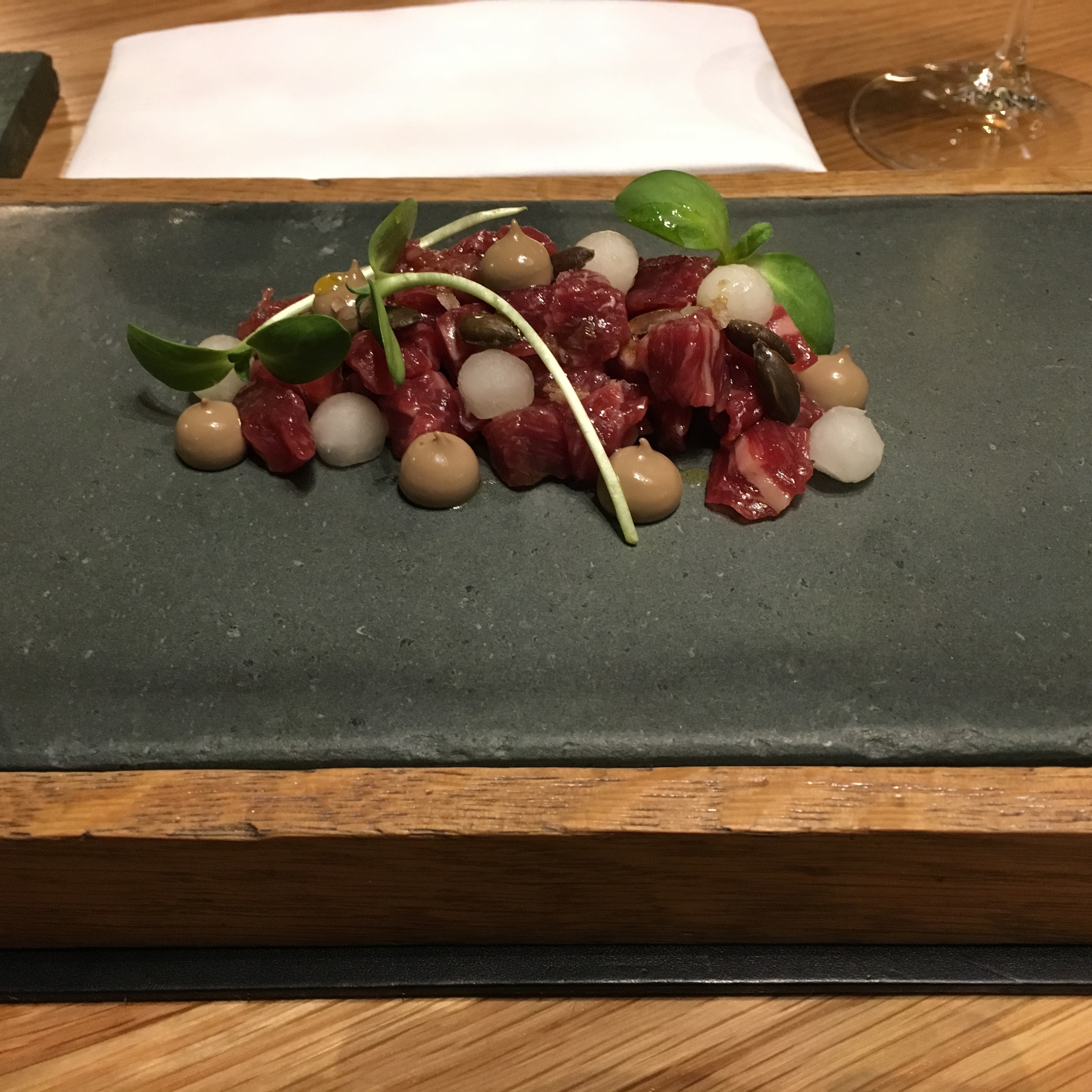 Over to mains, I chose the fish. It had an unusually constant, almost slightly jellyish texture. I assume it must have been cooked sous vide? There was a “sourdough crust” on top of the fish, which gave a nice crunch. The pickled mussels and seaweed gave it a clever seaside twist. The green sauce was a very intense and clear flavour. If I remember right it was parsley? Maybe the wine clouded my memory slightly at this point!

The wine pairing for mains was a dry Hungarian white. It was very spot-on and precise in flavour, less varied and hazy than the earlier glass. This really was an excellent pairing with the fish. 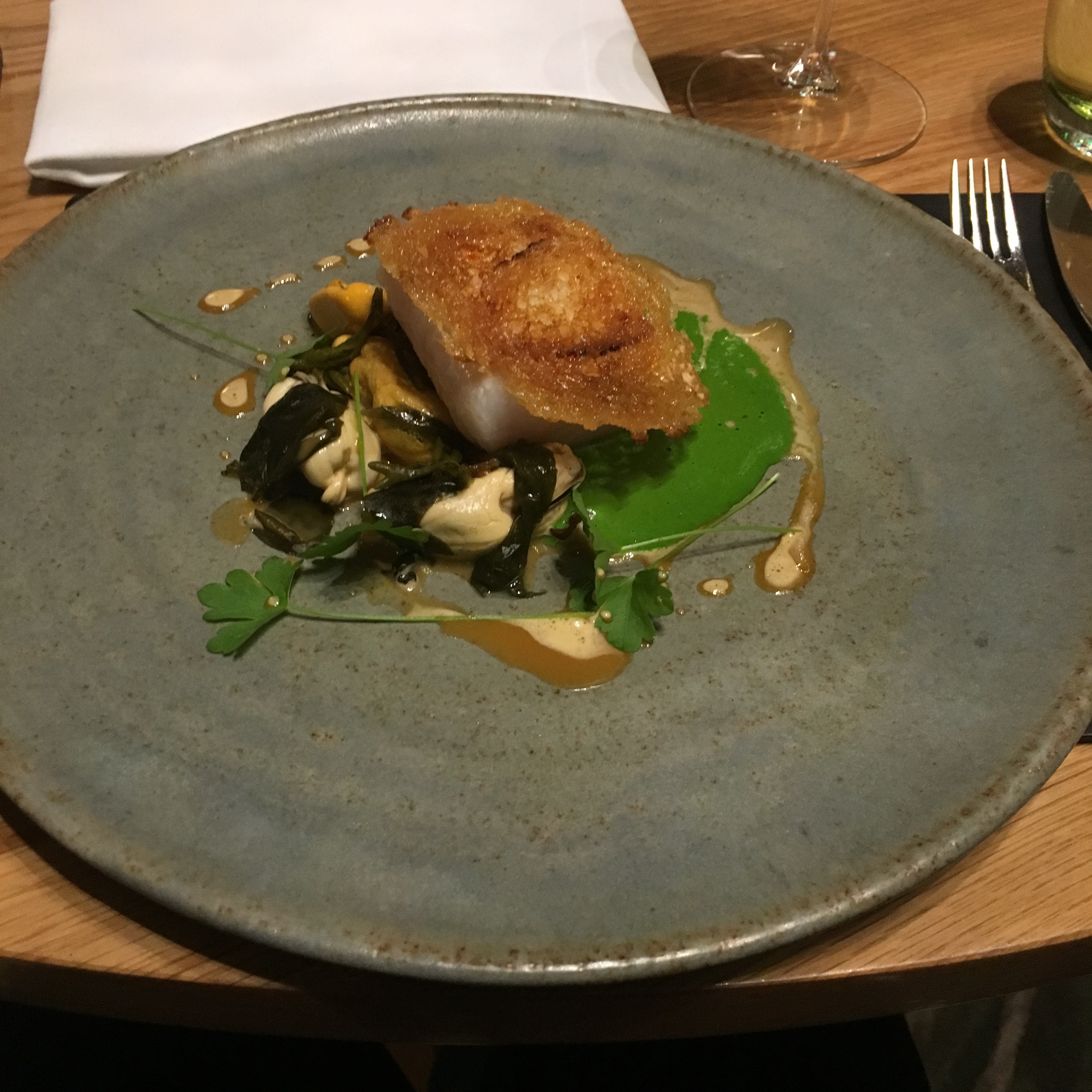 To finish off I opted for the squash dessert. The waiter explained to me that it was the least sweet of the desserts, which sold me on it. The squash was done three ways, as an ice cream, as a paste (closest thing I can describe is quince paste) and finally a ball somewhat reminiscent of Japanese mochi. Some wafers on top provided a counterpart to the rich flavours. An excellent end to the meal. 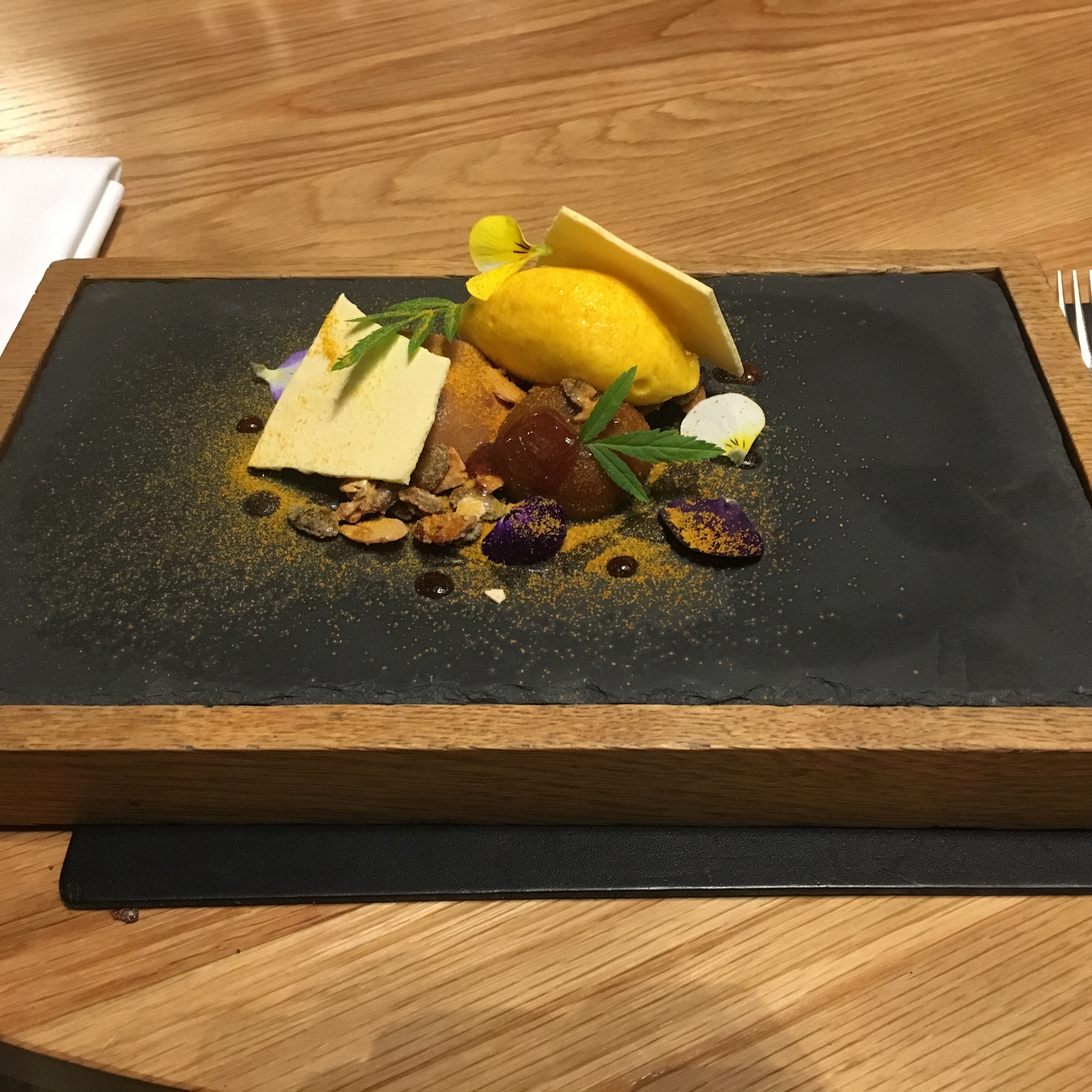 The service was generally pretty spot on. I was a bit surprised that the chef (not Simon, of course) came out to speak to the other table during our meal, but made no acknowledgement of me. As there were only two customers, and I imagine the kitchen couldn’t have been that frantic, it did feel a little bit rude even if the other table were regulars and I wasn’t.

A little later, for a snack I really didn’t need, I popped into Ho’s Bakery in Chinatown. I got the pineapple BBQ pork bun, and the honey bun. The BBQ pork filling was a bit drier than I get in London (I don’t mean that in a bad way, it’s just a different style) and was quite flavourful. The top was a little crispy and on the sweeter end of the pineapple spectrum.

The honey bun was filled with a smooth paste, flavoured with honey and desiccated coconut.

To complete the epic eating, I popped into Middle Kingdom for dinner. I arrived at the same time as a party of about 60, so I made sure to get my order in fast!

First off, the flavouring was spot on. I got a nice dose of ma-la from the pigs-ear. 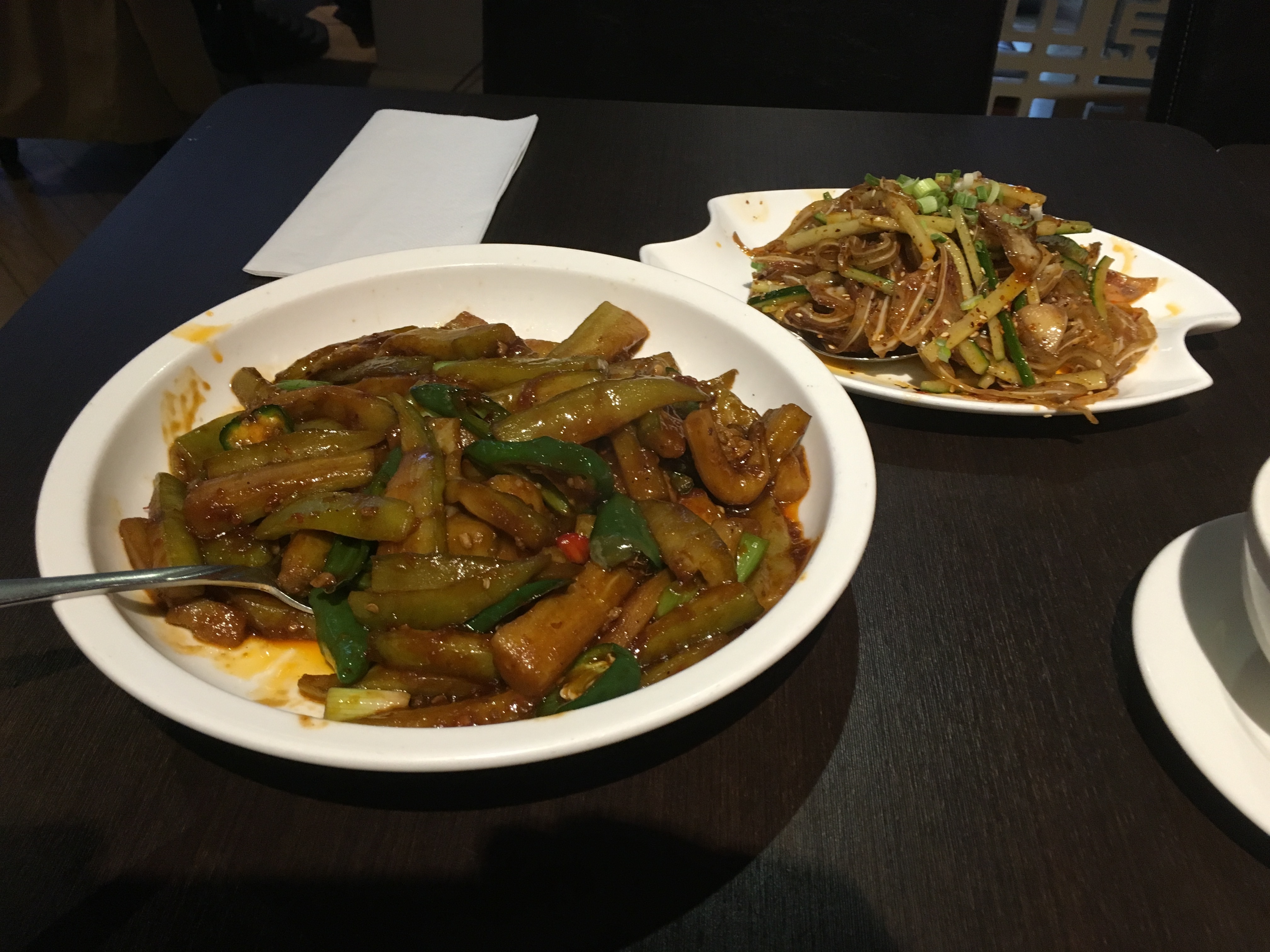 I left Manchester happy and very full. Thanks Harters for some good recommendations!

Phew. That’s a relief. I always worry when I give reccs.

Rogan (and the Midland) must be disappointed if the number of lunchtime customers was representative of the norm (which it sounds like it might be). By the by, the ox in coal oil is the one “signature dish” - it’s always on the menu. Mrs H & I have had it a couple of times. Neither of us like the taste. Next visit, we’re going to ask for a swap. And, yes, I know that probably puts us in a minority of two.