This is Aiden Byrne’s new gaff. Or, rather, this is Aiden Byrne’s old gaff, with some important changes. Aiden opened Manchester House in 2013. It was then part of the Living Ventures group. It was a success – at least for the customers. He left about 12 months ago for a new job on the other side of Spinningfields. Last October, Living Ventures closed Manchester House. Shortly after, Aiden took the opportunity to set up in the original space. There’s bound to be buckets of intrigue in the back stories but, you know, it felt right to see Aiden back in the space. It felt like the old place – same very comfy seating, good lighting, lots of space between the table, same open kitchen. Well, I suppose it is the old place. But gone is the upstairs bar and the chef’s table. And gone are servers in jeans, to be replaced by servers in suits.

We were asked if we’d been before and a positive answer seemed to prompt several “welcome backs” from staff. We didn’t recognise the staff with the exception of a woman who had served us a couple of times. She’s now training as a sommelier - good to see her get what I assume is a promotion. Her attitude and personality would make her an asset for any hospitality business. It also prompted a visit to the table from Aiden to say hello – we got an impression that the new arrangements are allowing him to be more “chef patron” than just chef, although I think we were the only table singled out for a visit.

As for the food, it’s by way of tasting menu. It’s probably fair to say that the restaurant is still finding its feet. When I’d looked online a couple of weeks ago when we made the reservation, there was 12 courser or 6 courser but, a couple of days ago, the 12 was replaced by a 9, at a reduced price of £75. Maybe Aiden has found that customers had baulked at the £90 larger affair – and it’s obviously important that he builds (or should that be rebuilds) a loyal customer base. Better to have customers rave about nine courses than come away a bit dischuffed. So, it was the nine courses that we ordered. And I’m about to rave over them. Tasting menus can be tricky but, here, nothing jarred and each course seemed to move to the next seamlessly (and Aiden has got his timings right – not rushed but no long delays where you start finger tapping)

The food kicked off with a two-bite sweetcorn macaroon, topped with raw scallop and a little caviar. It’s a belter of a start – the sweet savouriness you get from the corn, chewy macaroon contrasting with the soft texture of the scallop. And all held together with a hint of citrus from bergamot. The next course was a much more butch affair – pigs head croquettes with a sharp apple puree to dunk them in.

It’s back to the sweetness in the course which we both thought worked least well. There’s a thin slice of gingerbread, topped with foie gras mousse encased in sugar, a single cherry and a quenelle of cherry sorbet. Nothing actively wrong with this – just a bit underwhelming. Bread was served round about now – a lovely sourdough with two butters – one with herbs, the other chicken flavoured. Next up, a small bowl of chopped mushroom and Jerusalem artichoke. A rich mushroom broth is poured around it and, somewhere in there, there’s a very light pickled flavour.

Nothing underwhelming about the next course which featured Ribblesdale goats cheese. We reckoned this to be the most successful course, even though one of us is not keen on goats cheese. There’s very creamy cheese, a slice of Jabugo ham and sort of “onion four ways” affair – “crumb”, puree, pickled and dried. Really clever.

Then there’s a slice of venison carpaccio. It tops a mix of smoked cauliflower and white chocolate, the sweetness of chocolate balanced by fruitiness from blackcurrant. Interesting – in a good way!

Then it’s on to the “main course”. Unusually for a tasting menu, you’re offered alternatives here – pork or beef. One of us went for the pork – it’s a slice of rare breed piggy (the Oxford Sandy & Black pig – which we’d never heard of). It’s delicious – meat just cooked through, a thick rim of sweet fat and crisp crackling. It comes with a spear of white asparagus, a deep fried anchovy and another anchovy baked into a set mousse made from whey. I’ve never come across anchovy paired with pork before but it’s one heck of a success. Over the other side of the table, there’s long cooked beef shortrib, served in a hollowed out marrowbone. It comes with eryngii mushrooms, a little carpaccio and a tartar of Spanish Txogitxu beef. It’s a lovely combination of textures and flavours and is topped with a thickish sauce (beanaise ?)

For dessert, rhubarb parfait was bang-on for seasonality. The natural sweet sharpness was enhanced with orange and the plate was decorated with thin shards of both meringue and rhubarb flavoured sugar. The final course of the nine came with coffee – served like a mini cupcake, it was all the flavours of a classic Manchester Tart. To be picky, it was good but not as good as the actual tart at Mamuciium the other week). As an extra, there were some delightful petit four – a blackcurrant and liquorice jelly was a standout.

One of us had taken the wine flight. The sommelier, Mauro, has chosen exceptionally well and explained each one with knowledge and enthusiasm. Service from his various colleagues was exemplary – things happening as they are expected to happen without you really realising they are happening.

It had been a lovely evening and it was good to be able to offer best wishes to Aiden. I suppose the best of those wishes is that we’re certain to be back.

(PS: for anyone wondering about the restaurant name, Aiden wasn’t able to use “Manchester House” as the name is owned by the original company. “Mcr” is the usual abbreviation for Manchester)

Sounded like a really great place for fine dining. I was intrigued from the start - trying to imagine the mouthfeel of having that macaroon:

BTW, are you planning to try Aiden Byrne’s last place? Brian Hughson seems to have quite a formidable resume (having worked under Gordon Ramsay, Gary Rhodes and Marco Pierre White (all my food heroes from the 90s 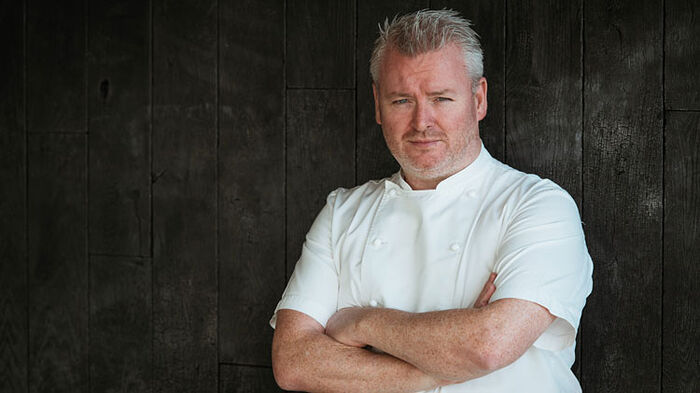 are you planning to try Aiden Byrne’s last place?

Probably not. And in fact we didnt try it when Aiden was there.

When it first opened, the restaurant was effectively split into two. One half offered Aiden’s tasting menu and a short carte; the other offered more basic grills - steaks and the like. Before we’d decided to go, I’d already seen online reviews that were not overly good. And, shortly after, the “fine dining” was pared back. I presume that was what led to Aiden leaving, As for going now, it looks as though the new chef is going to stick to the grills. I don’t need soemwhere else where I can get a good steak - might go just go for the views over the city.