Mini lunch crawl in Malden today after hitting the 88. First stop was Sillari’s Pizza, just around the corner. This is a cool place–small, and a limited menu with hand-tossed pizza the main attraction. Brick ovens. It’s in an old neighborhood pizza place that has been done over, with no seats and so it’s takeout/delivery only. One size pie (10") and only a handful of toppings. Slices are big–seemed like 1/4 of a pie, and cheese goes for $2.25 and toppings fifty cents, full pies are $10.50 with toppings a buck apiece. I forget all the toppings, but it’s a bunch of the usual–anchovy, pepperoni, sausage, mushroom a few others. The meats are from M.F. Dulock. The only other thing you can get are chicken fingers.

Round pies only for now–the chef said he did Sicilian once, but it didn’t sell. There are some specials weekly. (these apparently change around and may expand in the future–he says he has some charcuterie experience and may play with making his own charcuterie or hot dogs etc). Cheese slice I had was really good–really crispy crust, a not-too-sweet sauce with a good amount of garlic/oregano flavor, plenty of cheese and not too greasy. When I saw this place on Eater, the owner was quoted as saying they were looking to do a traditional neighborhood pie, without trying to reinvent the pizza. That promise gets delivered on. They just have expanded their hours some, so I think they’re doing OK. Recommended. Check it out if you’re in the area.

Also went up the road to Sichuan Taste to give it a try. Menu here looks pretty good–they have some mala spicy pot/soup selections where you can add a combo of assorted seafood/vegetables/meatballs that looks promising. Since it was lunch, I went for the 8$ double cooked pork plate. Comes with hot/sour soup and a choice of white or fried rice. I don’t usually love hot and sour soup, but this was a nice one–good balance of flavor and heat, with well cooked vegetables. The pork was a little less successful, though it wasn’t bad. The general flavor was fine and the peppers and leeks were cooked well, but it seemed a little sloppily done and the pork was kind of average. Maybe lacked a little heat. The fried rice was good but nothing special, but there sure was a lot of it. For 8 $ I’m getting two meals out of it, so there’s that.

Place is really clean + nice inside, and there’s a bunch of stuff on the menu that looks worth a shot, so I’ll go back for sure. They also have some other lunch plates that are out of the ordinary–chicken gizzard with chili peppers, mala pork kidney, wok tossed beef tripe, shredded pork with potato, spicy aromatic fish, etc so for the price I’ll likely scope it out again on a Friday I’m in town. The broader menu is probably worth exploring too.

It’s right on Main St, on a block with Malden Meat Stop (which looks like a Brazilian butcher, though I didn’t go in) and an Indian place called Joti Palace that I might have to check out since they have goat curry.

The Spicy Aromatic Fish Fillet on the lunch menu at Sichuan Taste is excellent. In fact, that’s what I had on my last visit, and I could eat that on a weekly basis. 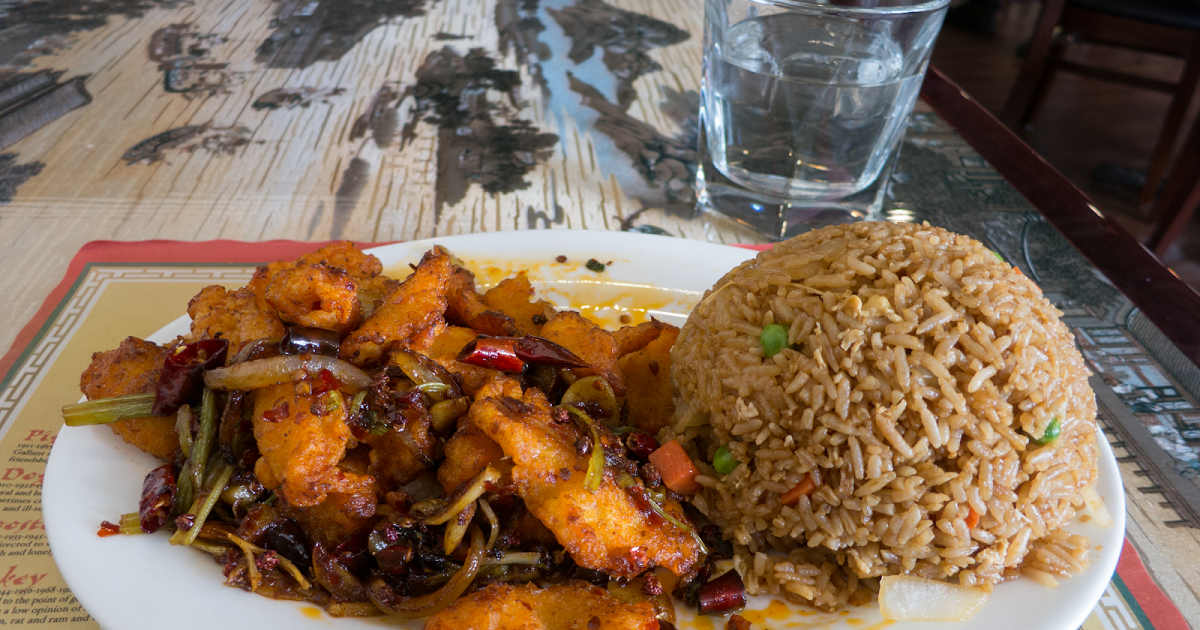 I have had Ramen out of a package twice this week, and that madness had to stop, so today I headed to Sichuan Taste in Malden for some (hope...

yeah, i saw that on your blog–that’s what I’ll probably go for next time. it does look good.