To spend time in Oakland Chinatown is to risk falling in love with the place, especially if you go on a random weekday when there isn’t any special event scheduled. Day-to-day life is what sets the neighborhood apart: elderly Chinese doing their early-morning tai chi exercises at Madison Square Park, or squabbling good-naturedly in Cantonese at the Ruby King Bakery — a folded-up Sing Tao newspaper in their lap, the table scattered with crumbs from the flakiest egg custard tarts in town. If you want to buy a live fish to steam at home, or choose between a half-dozen varieties of fresh Chinese noodles, or eat a bowl of jook before the parking meters start running for the day, Oakland Chinatown is the place to be. 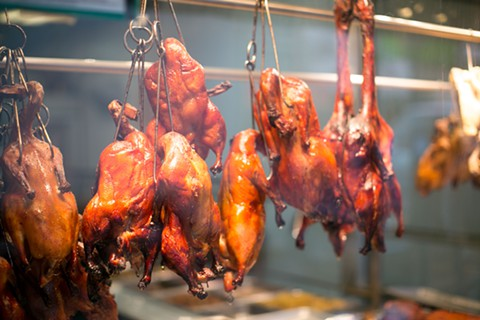 As ethnic enclaves around the country grapple with displacement and gentrification, activists and business leaders offer competing visions for the future of Oakland Chinatown.

excerpt: To spend time in Oakland Chinatown is to risk falling in love with the place, especially if you go on a random weekday when there isn’t any special event scheduled. Day-to-day life is what sets the neighborhood apart: elderly Chinese doing...

I’ve lived in the Sunset district, in the Richmond district, near the Chinatown/North Beach border, and also near Oakland Chinatown. By far I’ve enjoyed Oakland the most. I also feel it is the most vulnerable to gentrification because it’s relatively clean, has decent parking structures, is most convenient to transit (I wouldn’t call the 30/45 bus lines “convenient” exactly), and isn’t as overcrowded as the others.

I found the article very interesting and hope that the inevitable gentrification will bring in a group of people who will support the existing businesses. There are plenty of places to go nearby (eg Uptown) that can offer more upscale experiences so it would be nice to preserve the part of Chinatown that can’t be found elsewhere in the East Bay. Of course economics is blind to these distinctions.

A few years ago I don’t think people saw Oakland Chinatown as a desirable place to live, more so for anyone who is not Chinese. That has definitely changed.

I’m a little more optimistic about the fate of Oakland Chinatown than Luke seems to be. He is to applauded for doing a longform piece which discusses not only markets/restaurants but the neighborhood in which they reside.

There are already plans for more housing to be located to the east such as the huge Brooklyn Basin project near the Oakland Estuary and 9th Avenue or so. Housing for teachers will be at 2nd Avenue, near Lake Merritt and access to East Oakland will get an upgrade with the Bus Rapid Transit for the #1 Line on International Blvd.

Despite the increase in the minimum wage in Oakland, I haven’t seen any huge jump in prices and I’ve visited and eaten in the area for years and probably know every storefront between Franklin and Harrison and 7th and 11th Streets.

There have been some closures such as Chef Lau’s on 8th and Harrison but that’s due to major construction. Chilli Paddi, the new Malaysian restaurant on 8th Street seems to be doing ok and Shan Dong on 10th Street has been serving hand-cut noodles for 30 years or so.

What I’d like to see are some places like China Village in the area. Shanghai on Webster seems nearly empty when I walk by in the afternoon.

The core of Oakland Chinatown is only about 3-4 square blocks and there seems to plenty of room for additional housing east towards Lake Merritt, or south towards the warehouses in the Jack London area.

Tsai may have an appreciation for Oakland’s Chinatown, but he shows a vast ignorance of San Francisco’s Chinatown if he buys into the wheeze that it’s not a “working” Chinatown. You could throw out the four blocks of Grant Avenue that are zoned Chinatown Visitor Retail and still have an area that has three times as much “work” being done as Oakland’s Chinatown (which is padded with many Vietnamese businesses). True, SF’s Chinatown is denser, with more traffic, but Oakland Chinatown always seems dead to me.

I don’t think that labeling a Chinatown as “working” or different degrees of “working” serves any real purpose. It is precisely the density of SF Chinatown that makes it less susceptible to gentrification. The first year or two, I loved living and shopping there. But by years 5 and 6, I really dreaded my weekly grocery shopping trips and had to rest up both physically and mentally to fight the crowds. It was such a relief to move to Oakland and shop peacefully. I appreciate both Chinatowns but it is easier to live near the Oakland one.

I reread Luke’s article and am unable to find any place where he ‘buys into the wheeze that it’s not a working [San Francisco] Chinatown.’

OK, he didn’t explicitly endorse the sentiment, but used a little Trump-like innuendo:

This is why folks who frequent the neighborhood talk about how Oakland Chinatown is a “working Chinatown” — a characterization that doubles as a jab at the trinket shops and tourist traps that dominate the more famous Chinatown across the bridge.

The implication is quite clear.

Hi Gary — your point is well taken. I got to appreciate SF Chinatown a lot more when researching a story on Chinese bakeries in San Francisco a while back. Certainly there’s a robust day-to-day “work” happening there as well.

Perhaps the better point to make is that Oakland Chinatown definitely is not — for better or worse —any kind of tourist Chinatown. (And maybe we in Oakland sometimes have too much of a chip on our shoulders regarding our more famous, and more widely praised, neighbor city across the bay!)

I’l swap you Sam Wo (and throw in House of Nanking) for Classic Guilin Rice Noodles.

Well I think part of the reason why it seems dead is the fact that a significant portion of people that patronize OAK Chinatown businesses come from Alameda. Like my great aunt they take the bus in, do their tai chi, grocery shopping, eat lunch, and head home across the tube. Just see a 51A or 20 bus at 7th and Franklin between 4-6PM any given weekday to see the number of Chinese Alamedans that do it. If Alameda ever got a 99 Ranch, that would probably kill OAK Chinatown more than the young mostly white people moving in or an increase of the minimum wage.

I can see how someone wouldn’t characterize Grant Ave as a “working” Chinatown, but how is Stockton St, not one.

I shop in Oakland Ctown, once a month after the flea market. Maybe, I’m not looking but I don’t see a lot of apartment buildings there as in SF. For East Bay Chinese, it is a lot easier to come to Oakland than to San Francisco to shop for food. And you can park nearby.