A recent study suggests low Gluten diet diets can increase the risk of Type II Diabetes as a result of the reduction of cereal fibre in the diet.

It’s just a “snippet” of the original research, taken out of context. It should really be titled “We’re trying to suggest that those who consume less fiber might, possibly, may be, at a slightly higher risk for type II diabetes, but we don’t really know until someone else does some real research.”

This is a purely observational study, which means it has Zero statistical validity.

They use the term “tended” which without providing the statistical probability is a term with absolutely zero meaning.

“Study participants reported their gluten consumption and the study was observational, therefore findings warrant confirmation by other investigations. Also, most of the participants took part in the study before gluten-free diets became popular, so there is no data from gluten abstainers.” Which means our findings are useless and have no reality to them.

I HATE when bad research gets bandied about. It then gets accepted as fact, when it has none. Think anti-vaxxers/autism, eggs bad because of cholesterol, bacon and nitrates/nitrites bad, MSG bad, etc., ad nauseum! All due to a single poorly written, no fact checking, original article, ineptly discussing, horribly designed research articles, taken completely out of context.

That’s a dopey conclusion to reach. The real issue is starchy diets vs diets rich in lower calorie, lower sugar veggies in place of starch.

Since I’ve become wheat allergic (maybe sensitive to gluten, but certainly not celiac), I’ve looked at a lot of gluten free products, like breads, crackers or crumbs. The problem is that too many on GF diets are subbing pure starches devoid of any protein or fiber for grains instead of eating a much healthier diet of non starch sources of carbs.

GF foods can be more healthful if one doesn’t turn focus to replacing the bad foods with inferior versions of them.

You can’t relate “person-years” to cases of diabetes without actual “person-numbers.”

I understood the studies involved 200,000 people and they reported 15,000 cases of Type II Diabetes.

True it’s a macro observational study but it did reveal a correlation. It’s also known that Type II Diabetes can be “cured” by a change in diet which includes certain cereals.

So there is a causal mechanism sitting underneath these observations of a correlation between diet and diabetes.

So I think it’s a little unfair to lump this study with a lot of the faux science stories. A long way to go in this whole field, but I think it fair to say an extreme change in diet can have unintended consequences. For the unhealthy eater of high fat/sugar diets the increased risk of diabetes. And for the “healthy” gluten free dieters also a potential risk of diabetes.

Eating too much of anything is commonly understood to be a health risk. Cutting out foods and eating healthily is rarely thought to increase risks. So maybe this observations study that shows a correlation needs looking at in more depth.

It’s also known that Type II Diabetes can be “cured” by a change in diet which includes certain cereals.

False; pancreatic beta cell loss is not cured by anything, most of us have lost 50% of it well before diagnosis of DM, so diabetes is not cured. It can be tightly controlled by carbohydrate restriction, which is the only dietary intervention ever demonstrated to reverse it’s progress and do away with the need for medications.

Correlation in no way even hints at causation.

Diabetics need to get off the grain feedlot like the rest of the animals being fattened for slaughter, GF or not.

The current state of diabetes care in the United States health system shows the inability of existing recommendations to control the epidemic of diabetes, the failure of low-fat diets to improve obesity rates, cardiovascular risk or general health,...

Here is a study that indicates that diet changes can have a long term positive impact: https://www.ncbi.nlm.nih.gov/pmc/articles/PMC3168743/

It’s a small study (but I selected it because of its source) but would appear to back up a lot of other articles.

Correlation in no way even hints at causation.

I know this is a bit of a mantra but its not always correct. A correlation can be a very strong indication that a scientific hypothesis is correct especially when there is causal explanation/mechanism underlying it. Obviously you need to minimise or eliminate confounding factors. Science is often moved in small incremental steps and a strong correlation can be one of these steps.

Good point. But given the quality of media gluten dietary advice and the number of people who go on low gluten diets without much understanding of why they do so, I suspect it isn’t that easily adjusted. So low Gluten is a always going to be low fibre…

Ask any scientist to name the weakest form of evidence and she will say “correlation.” A first cousin is “association.” These two can raise interesting questions, but do not furnish answers like the subject header on this thread.

it’s also higher carbohydrate pretty much in every product by a lot, and the protiens, which mitigate post meal glucose spikes, is removed.

Ask any scientist to name the weakest form of evidence and she will say “correlation.”

In isolation yes. But as part of the scientific method no.

You need correlations from your experimental results to experimentally test a hypothesis. And then you need a good causal mechanism that shows why the correlation makes sense - to prove the correlation is real. You then look for confounding factors ands see if these can be eliminated or not, try to set up double blind tests to eliminate bias…and you test the statistical significance of the results etc etc to ensure its not just a random correlation.

The mantra “correlation does no imply causation” is a good test for lots “pop science” articles or simplistic political assertions…but lets not throw out the baby with the bathwater…!

it’s also higher carbohydrate pretty much in every product by a lot, and the protiens, which mitigate post meal glucose spikes, is removed.

Which, whilst obvious to the more informed, is probably missed by manny of those that jump into Gluten free for no other reason than believing it to be healthier. Hence my interest in this research. I think its assumed a switch to low gluten is safe and healthy yet it potentially has some unintended consequences.

That may be our shared opinion, but that merely amplifies the fact that high carb diets cause diabetes. That’s nothing new. It in no way demonstates a causal relationship for gluten free diets, which don’t necessarily even include starches. They just exclude the protein gluten.

I think we are about to go around in circles so best to agree to disagree.

A friend posted this on fb today, had to share:

“Patients need to understand evidence - and so do scientists and journalists and policy people. One fundamental is “correlation is not causation” - the fact that two things go up and down together does NOT mean one CAUSES the other.
At LAST, a gold mine of examples!” 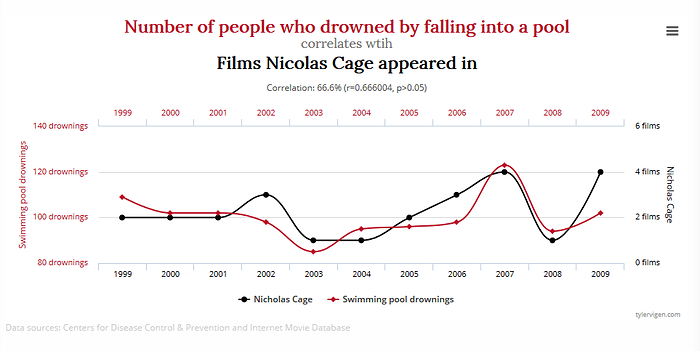 15 Insane Things That Correlate With Each Other

Why do these things correlate? These 15 correlations will blow your mind. (Is this headline sensationalist enough for you to click on it yet?)

But the divorce rate in Maine does have a causal link with margarine consumption…!

In my career I have pushed back on many decisions underpinned by dodgy correlation/causation arguments. So much of management thinks/science and leadership theory is based on such simplistic thinking.

I love BBC programs like “More or Less” that take apart lots go bogus statistics that are spouted by PR companies, Politicians and journalists.

However, lets not forget the evidence that that underpins much scientific theory and discovery is also generally a correlation/relationship between variables. The difference is that there is a clearly articulated causal mechanism/theory sitting underneath.

Remember that those, in the 1950’s, who suggested that smoking caused lung cancer because the high correlation between the two were ridiculed for a long time (Ernst Wynder & Richard Doll). It wasn’t until 1988 until the genetic mutation in gene p53 caused by the benzo pyrene in the smoke was discovered and the causal mechanism was clearly demonstrated.

However, lets not forget the evidence that that underpins much scientific theory and discovery is also generally a correlation/relationship between variables. The difference is that there is a clearly articulated causal mechanism/theory sitting underneath.

I think you are using “evidence” as synonymous with “data” or “observation.” It’s not anywhere close to proof. As I said, it can raise useful questions that investigation can answer. It’s not an answer.

I think you are using “evidence” as synonymous with “data” or “observation.” It’s not anywhere close to proof. As I said, it can raise useful questions that investigation can answer. It’s not an answer.

OK - but what comes out of the “investigation” is it not the evidence/data that proves the hypothesis that is being investigated.

The “Scientific Method” is a circular process that refines a theory (often based on observation), solidifies a hypothesis (causal mechanism), tests the theory and hypothesis by gathering data.

The data is often a positive or negative correlation between a cause and an effect. Good experimental design ascertains whether its causal and eliminates coincidence.

And to cycle back to the beginning - Type II Diabetes has a basis in diet, low gluten diets restrict some foods and boost others that are implicated in Type II disease. The correlation in the data therefore is meaningful and it can be concluded that some low gluten diets ca increase the risk of Type II diabetes…an unintended consequence of following a dietary fad.