I’m on a budget and make a lot of sandwiches. Standard lunch meats really bore me so I’m trying to find some alternatives. For the last year I’ve been getting different hams from the Russian markets on Geary. My favorite is the “Moscow Ham” at New World Market. It’s a ham studded with garlic. The Ukrainian is seasoned with caraway.
As much as I love fancier options like the blood salami and mortadella at Fatted Calf, it is hard to beat the under $10/lb options at New World.
Any suggestions? Unless I happen to be in Berkeley, Oakland or the Peninsula for another reason I probably won’t travel too far outside the city just for some lunch meat.

You might take a look at Cal-Mart 3585 California in Laurel Village. The deli there has a more varied selection than Safeway. My favorite is Lebanon bologna. Prices are not low, but no higher than Whole Foods.

Thanks for the suggestion. That will be especially exciting news for my mother who has asked if I can find Lebanon Bologna, a staple from Pennsylvania that she hasn’t had in decades!

Lebanon Bologna, a staple from Pennsylvania

Oh that’s interesting, my grandmother lived in Easton PA and would bring it out when she came to visit. She’d sear it in a cast iron skillet with breakfast. That’s also how I came to love scrapple. I never knew it was called Lebanon Bologna.

I went by there today and the fellow at the counter didn’t seem to know what Lebanon bologna was. They had “beef bologna” which, while similar, I believe is a different product.
I picked up some “pickle and pepper loaf” which is something I had not seen before.
Also, apparently ordering a 1/4 pound is frowned upon as I got a bit of attitude about that. Oh well. The prices are pretty good though.

The Lebanon Bologna is pretty much just summer sausage. Supposedly a bit more sour? I don’t know if or when I ever got to try it.
I wish scrapple was more common. I tried the version at Bette’s Oceanview in Berkeley and while pretty tasty it was definitely a toned down version with no organ meat used.
I made my own, but the recipe I followed, and my job following it, didn’t work out so well. Way too much “hoof” taste and too much liver. I should try again, but it was a bit of an intense procedure for the slow cook that I am.

Not in SF, but if you’re in the North Bay, Raley’s in Petaluma had Lebanon Bologna for $8.99/lb. 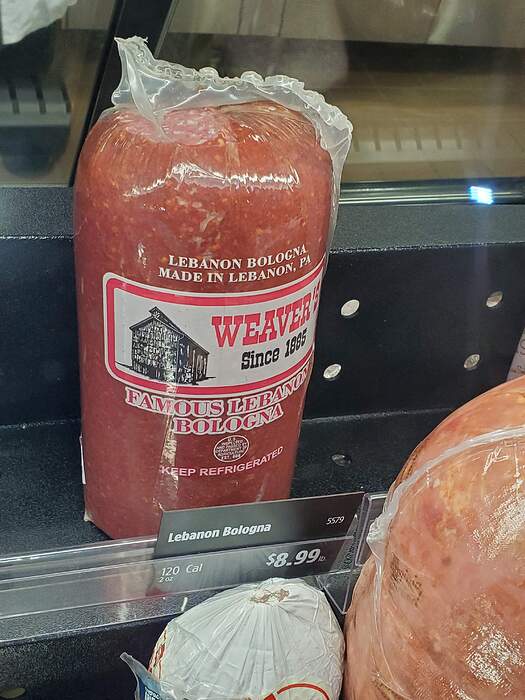 Cal Mart is my corner store, I OFTEN buy quarter lb at the deli. Sorry that your guy was off his meds that day.

What about those banh mi sandwich ingredients? I don’t recall them being that expensive but… the last time I looked for those ingredients were years ago…

I went by there today and the fellow at the counter didn’t seem to know what Lebanon bologna was. They had “beef bologna” which, while similar, I believe is a different product.

I don’t know exactly what’s special about Lebanon style (at first I wondered how it might differ from the Syrian or Jordanian styles, then realized I had to be on the wrong track

), but every bologna maker has their own formula to some extent, so don’t assume that something generically called “beef bologna” or whatever will always be the same. Any brand that looks decent is worth a try - you might find something good enough to buy again. (I guess “looking decent” is useless, they all look pretty similar. So just try one and see.)

IMO for this type of sandwiches it really helps to have a little variety. Even the best choice gets boring after too many in a row.

That is a good idea. I tend to eat sliced bread these days due to some jaw issues, and eating bahn mi ingredients on some wheat or rye sounds weird, but it might be tasty! Those “fancy pork” things (chả lụa) with the studded black pepper would be an interesting change of pace. If I could find a good source of vietnamese fish cakes I’d do that too.

It appears that Lebanon Bologna is cured, dried and fermented, so leans more in the direction of a salami than typical bologna.

Yeah I remember it being really similar to “summer sausage” like you’d get at a Hickory Farms mall store. (I always get them confused with Cracker Barrel, but that’s a restaurant, though oddly enough Cracker Barrel was started in Lebanon TN, not to be confused with Lebanon PA where the bologna originated).

Just wait till you try some Barrel Farms hickory crackers! (Made in the town of Pennsylvania, Lebanon)

Oh hm… maybe you can get some Little Lucca’s hot garlic sauce and smother that into the bread as well?

It’s St. Patrick’s day and there’s a lot of corned beef on sale, for not much. Sous vide it to a sliceable texture and you’re set.

I happened to just make a corned beef this week! I didn’t even think about the holiday.