Although I’m a (east) Londoner, I spent much of my life in Toronto. I’ve also spent time in Montreal, which I consider the food capital of North America - but I digress. This leads me to talking about poutine though. It seems to be becoming a trend in London. However, it’s not a trendy thing at all but something very simple. Messing it up with trendy gourmet ingredients is silly, although in Montreal one famous poutinerie La Banquise, there are probably forty variations. What you can’t vary is the cheese. And it’s not actually cheese - not mature cheese anyway. It’s cheese curds - what will turn into cheese if you tend it and let it go (I know cos I just made my first batch in March). Cheese curds don’t melt much, they don’t have tons of flavour. they are fresh and they are ‘squeaky.’

I’ve had some horrible bloopers in London, made with mozzarella, cheddar, you name it. Anyway, the best is the Poutinerie. These guys are Canadian and they take their food truck /stall from market to market during the week. So I know poutine is ridiculously unhealthy (mega fat) so I don’t have it often. But a couple of Fridays ago I did.

The chips are perfect - the right size and crispness. The cheese curds are perfect too. And the gravy is beefy and delicious (yes, they do a veg gravy). For people who like fancier, they have ribm eat poutine, which can be served with the spicy Ribman sauce. And you can get the chips on their own, plain or spicy - but who wants to do that?

I ate them walking from Wentworth Street (Petticoat Lane area) over to Brick Lane. The cheese near the bottom melted a bit. The top layer stayed fairly intact. I had a small squeeze of that Ribman sauce - it’s very spicy but delicious. And I enjoyed it way too much and tried not to think of my arteries. Enough for two. Go get it! They’re The Poutinerie on Facebook (that’s where they post the monthly market schedule). 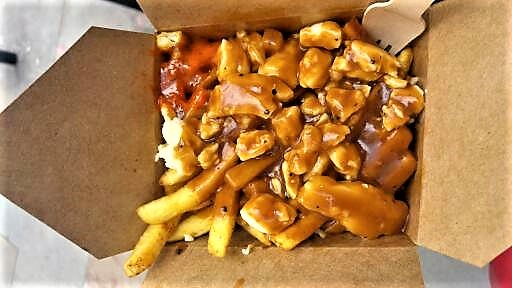 I’ve never eaten poutine but hope to do so later in the year. We’ll be visiting Burlington, Vermont, which is a stone’s throw from Montreal and seems to have it on several menus. My hope is to try it twice. Once as the “proper” version and, secondly, with a “trendy gourmet ingredient” - in this case, confit duck with duck gravy - as a starter at a Frenchish bistro. I’ll report back, of course but, in the meantime, I have poutine envy.

Second this poutine - it’s amazing. Canadian cousins also gave seal of approval. And now I am craving this now… haha