[London] Lox and beigel from the Beigel Bake, Brick Lane

One of the must-visit spots on Brick Lane - the 24-hour Beigel Bake. It dates back to 1974 (my first time there was 1994). The place exudes a retro charm, everyone seems to be there for their beigels - they sell up to 7,000 per day! There are various types of filled beigels - one of the most popular is the salt beef with mustard. This place gets especially busy on weekends. 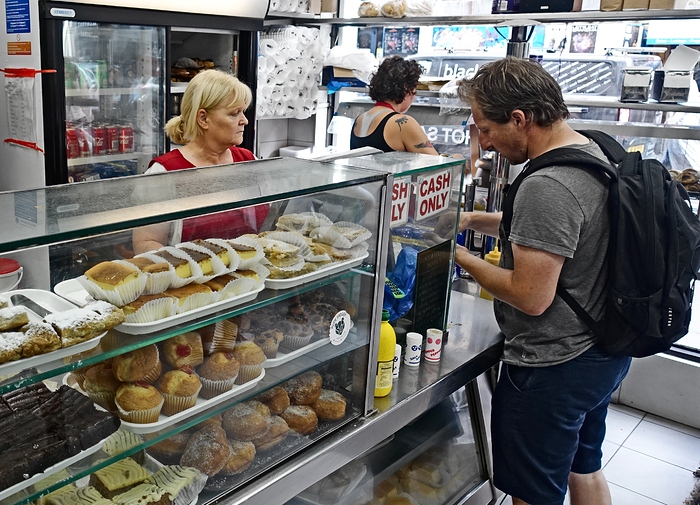 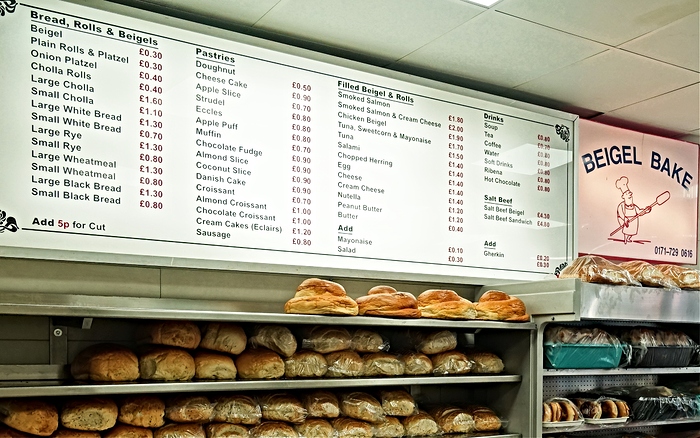 The beef brisket were cured for 5 hours: 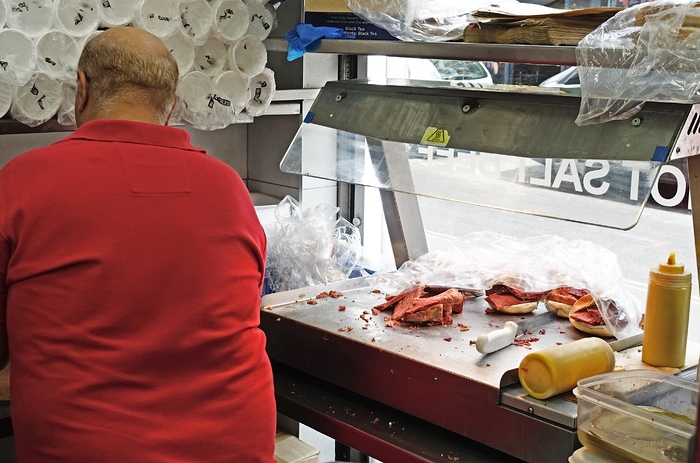 My favourite is the one containing a fillet of brined salmon (lox) on cream cheese (£2). Best ever. 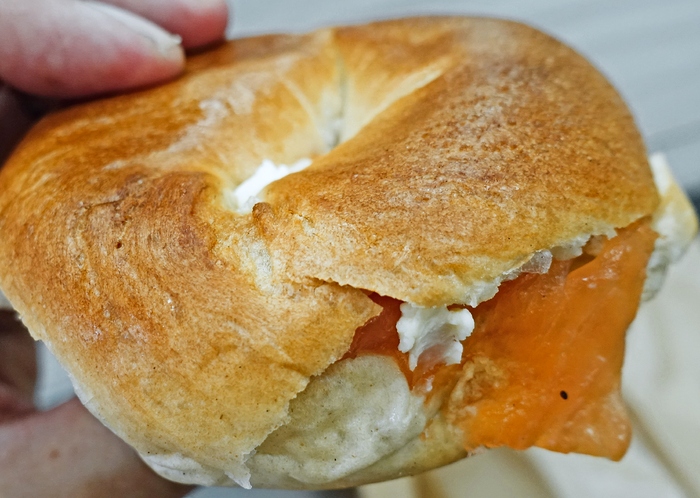 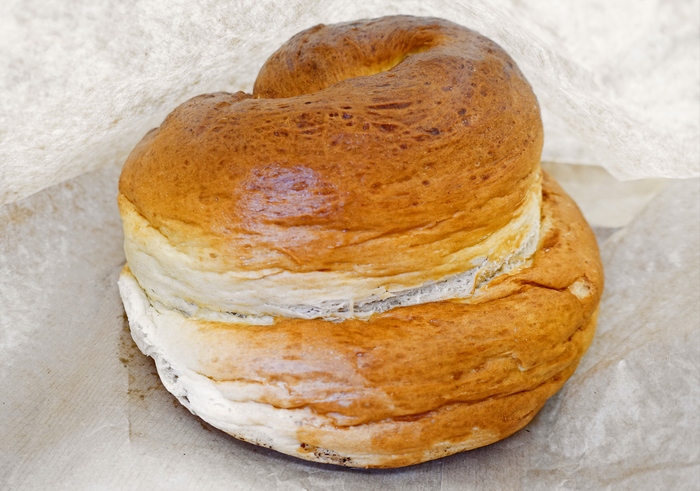 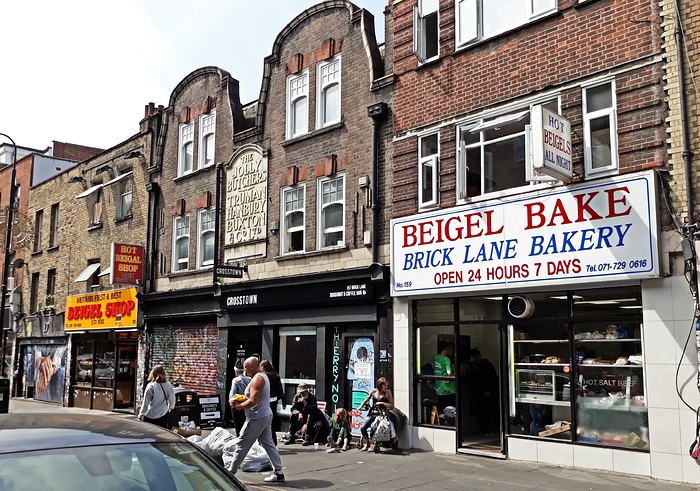 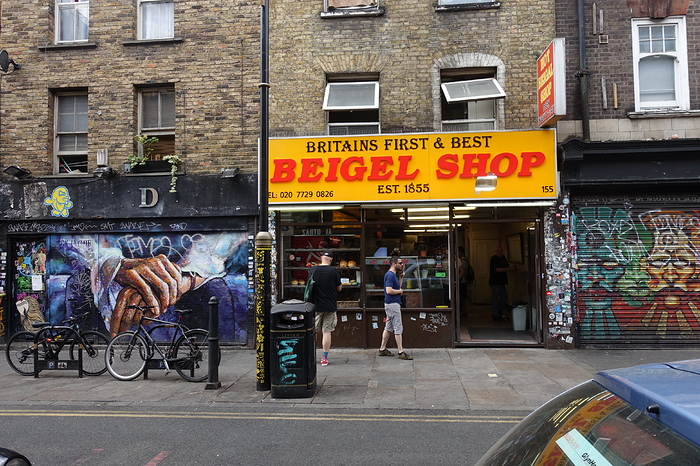 Beigel Shop nowadays offers the slightly sweetish rainbow beigels. I was told that Beigel Bake chose to stick to tradition and not have rainbow beigels on their menu. I didn’t see any when I was at Beigel Bake last week, though their web-site seems to indicate that they’ve relented and offer those. 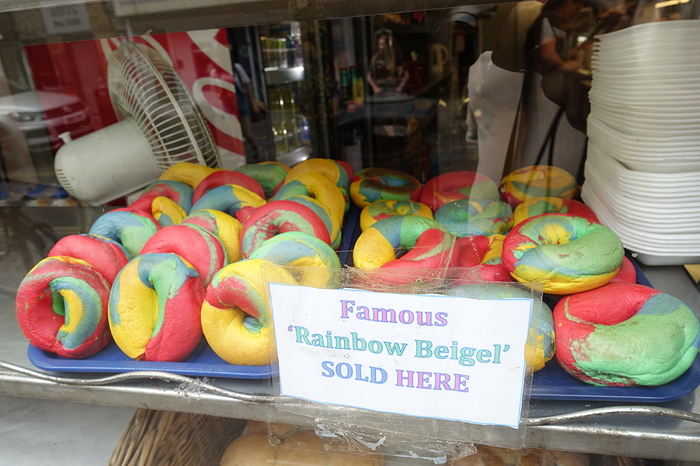 Spitalfields in the 19th-century used to be a largely Jewish quarter, before a wave of South Asian, mainly Sylheti-Bangladeshi immigrants, transformed the place, and the local synagogue became a mosque. Beigel Bake and Beigel Shop are the only two leftovers of the old Jewish neighbourhood on Brick Lane - and the end of the street near Whitechapel is lined with Bangladeshi curry houses and South Asian grocery stores and bakeries. These days, one sometimes catches a rare glimpse of the old Jewish persona amidst a largely Bangladeshi-Muslim presence. 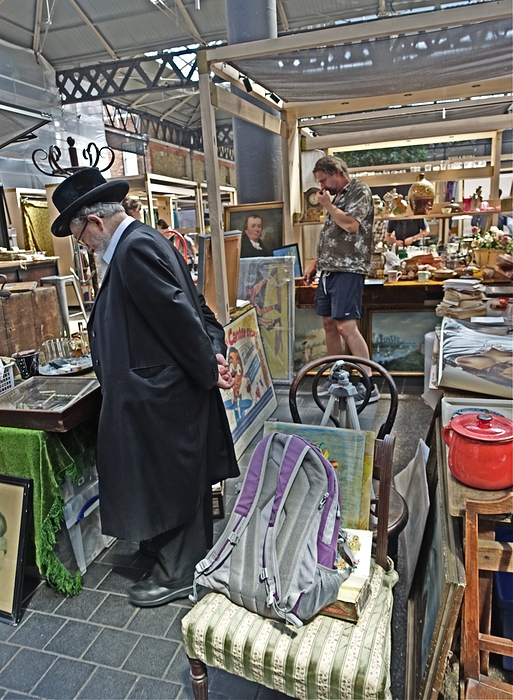 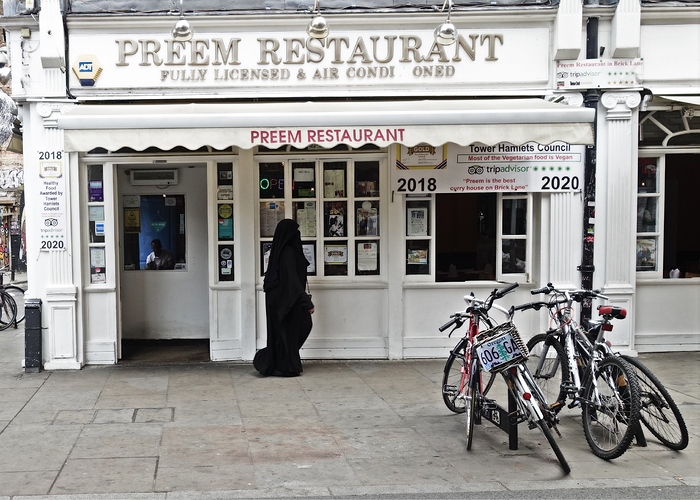 ever had a montreal bagel, john? they are sweetened with honey and, in my mind, beat new york bagels by quite a bit.

the smoked salmon at beigel bake always reminds me of my childhood. it’s that same time (and likely a lower quality than many but so nostalgic). sometimes i get the salt beef with mustard and don’t forget the pickle. but most of all, the cheesecake. an old fashioned taste that nobody does better than these guys.

ever had a montreal bagel, john?

'Fraid not, Jan. In fact, never knew there was such a thing.

FWIW, Manchester has the UK’s second largest Jewish community but the traditional Ashkenazi foods have never really got into the general community. My guess is that it was part of the comparitive hurried assimiliation of the immigrants into Manc society that the food didnt leave its mark outside of the small area in which they lived. Even the Titanic deli closed a couple of years back ( so named because its founder was a survivor of the sinking) as the Jewish community continued to moev away from Cheetham Hill and its wider area.

https://www.tripsavvy.com/why-montreal-bagels-are-better-than-new-york-bagels-4144657 - the biggest difference is: boiled in water slightly sweetened with honey before baking, wood oven (makes them slightly smoky and crisp . If you ever get a chance, try one!

You speak my language - anyone who, in one sentence, can include “honey”, “smoky”, “crispy” is onto a winner.

Back to Beigel Bake last Thu for a salt beef on bagel sandwich and a sausage roll. Our first choice had been to have breakfast at Rochelle Canteen, but was told when we got there that they are preparing for (yet another) photo shoot. The kitchen crew was busy cooking, but the dishes were all meant for the photographers, not paying customers.

Back to Beigel Bake.

I popped in the other day. I went with my other half and before we went in she asked Beigel Shop or Beigel Bake? I said is that even a question , always Beigel Bake. I had the salt beef beigel with mustard and gherkins,

The beigel seemed better than I remember but still not enough fat on the beef for me
and they’re still a bit grumpy so nice they’re keeping up that tradition. Also had their terrible coffee, I knew it would be terrible but salt beef beigel and coffee was always my order when I normally ate there which was usually 3 am after a night out and I needed a coffee to keep me warm. 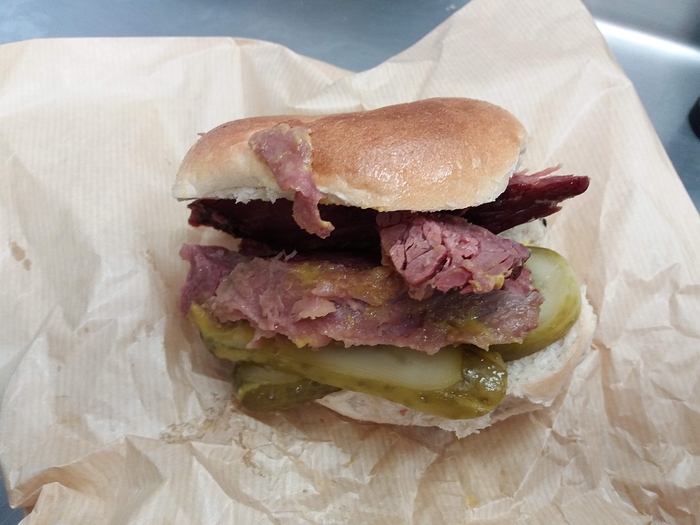 It’s the same thing. Apparently, the salt used to cure beef in the old days were large-grained, almost the size of corn kernels, hence the term “corned beef”. In the UK, the term “salt beef” is used.

Not in UK terminology. Corned beef here is finely chopped salted beef held together with gelatin. It looks like this: https://www.flickr.com/photos/rjw1/14757714604/

That product is widely available here in the US too. Its called Pressed Corned Beef on this side of the Pond. Makes a wonderful sandwich with any type of mustard as a dressing.

Surrounding St Patrick’s Day (when everyone is Irish), grocers and butchers here in the US sell a lot of Salted Beef that has been brined and spiced and is called Corned Beef. “A rose by any other name…”

That product is widely available here in the US too. Its called Pressed Corned Beef on this side of the Pond. Makes a wonderful sandwich with any type of mustard as a dressing.

My partner takes corned beef sandwiches to work for lunch two days a week, and therefore uses quite a range of condiments: https://www.flickr.com/photos/rjw1/19226582842/

He uses the corned beef that comes sliced in a packet from Waitrose, though. I tease him that this makes him posh.

Ghanaian and Nigerian cuisines use the canned type of corned beef a fair bit, which surprised me when I first learned it, but I guess it’s from colonialism. I make a great gari foto with it (if I do say so myself).

He uses the corned beef that comes sliced in a packet from Waitrose, though.

I have genuinely researched the story of tinned corned beef (for my book about food during the Great War). I love it and, from time to time, use it to make pasties. Mrs H uses it for her almost world famous corned beef hash (along with onions, potato and Gavascon). It needs plenty of HP brown sauce.

I like a corned beef sandwich using sometimes using the ready sliced stuff from the packet (usually from Sainsburys though), has to be piccalilli as the condiment and must be white bread.

Tinned corned beef is used a lot in the Philippines, especially for breakfast. It’s fried and comes with rice and a fried egg and is known as silog. At one guest house we stayed at all the Filipino guests got silog. Non Filipino’s got cold pancakes, cold fried eggs and cold rubbery bacon. I’m guessing they assumed we wouldn’t like silog. The next morning we asked for it & they were a bit dubious but it became a firm favourite.

It’s fried and comes with rice and a fried egg and is known as silog.

Chris, they’re called Spamsilog, an updated version of the older tapsilog . This ubiquitous dish’s name is an amalgamation of its 3 main components: beef tap a (dried BBQ beef), si nangag (fried rice) and egg (it log ).