It was the annual Chinese New Year dinner yesterday, organised by the Singapore-UK Association (SUKA), a 34-year-old organisation which brings together Singaporean families, professionals and students living in the UK.

This year, the dinner was held at Royal China, Baker Street. I’m not able to join in the dinner this year, but really wanted to share about the food that was served there last night. It’s simply incredible for me to see how far Chinese food has come in London in the past 3 decades. I remembered back in 1990, the “best” Chinese eateries were in Soho: Fung Shing, Mayflower, and Lee Ho Fook (mentioned by Warren Zevon in Werewolves of London), all serving rustic, stodgy Toishan-Cantonese fare, and all are now sadly long-gone.

Cut to today, and we now find that London’s Chinese restaurants like Royal China here are able to offer dishes which approach the standards of what we can find in Singapore!
I was particularly gob-smacked to see that even yee sang, the raw fish Chinese New Year festive salad which can only be found in Singapore and Malaysia (it’s alien to HK, China or Taiwan), and only during the 15-day Chinese New Year season (that’ll be 1-15 Feb this year), was also on the special menu which Royal China Baker Street prepared for the SUKA dinner. 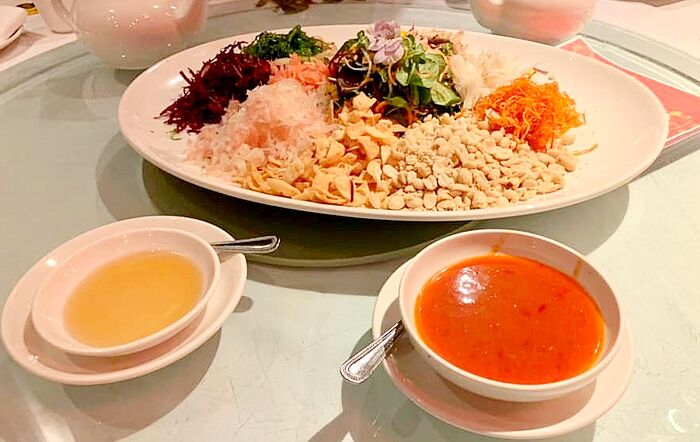 Photos were taken by my good friend, Ruth Johnston, a SUKA member who loved exploring eating places in London and beyond.

Other dishes served yesterday evening were:
Hot-and-sour seafood soup - a Cantonese adaptation of a Sichuanese classic. Even in Singapore, this soup is usually toned down as Singaporeans (like the Hongkongers) don’t tolerate the Sichuan-level of chili heat in the original version. Usually served with dark vinegar as an added condiment on the side. 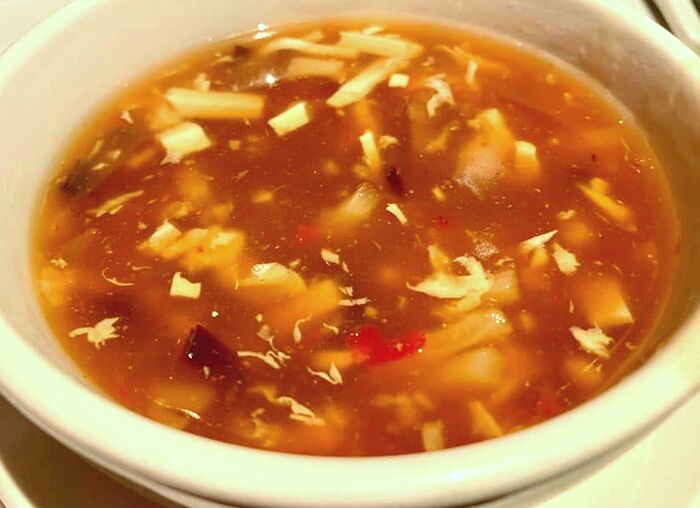 Braised lobster with ginger and scallions, served atop noodles - all my life, this is one dish which we’d come all the way to London for - if there is one dish which Chinese restaurants in Soho did well, it’s this one. Even today, this is the ONE dish which Singaporeans will never fail to order if we have a get-together in a Chinese restaurant - we can never seem to find one as good back in Singapore - maybe it’s the London air.

We used to order the dish all the time at the (now-defunct) New Mayflower on Shaftesbury Avenue in the 80s/90s, but subsequently found great renditions at Four Seasons (Queensway), Pearl Liang, and here. 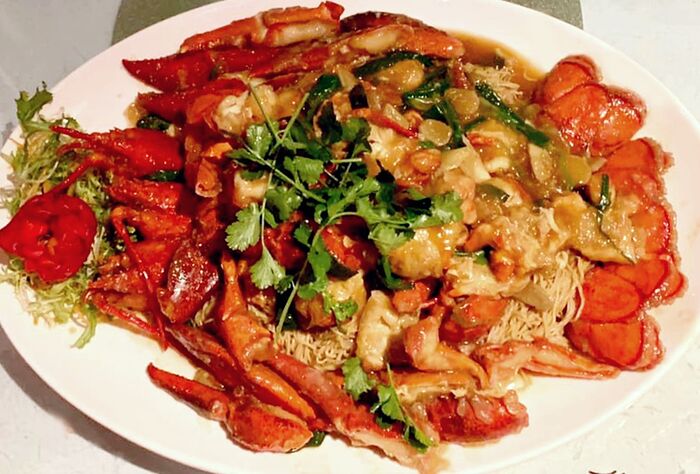 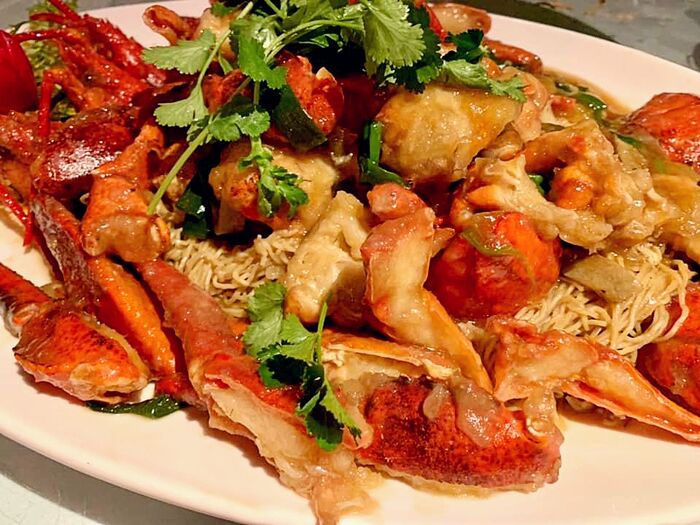 Cantonese-style crispy-skinned roast duck - a must-order at any good Cantonese restaurant in London. As far back as the 70s, Hongkongers, Singaporeans & Malaysians visiting London would make a bee-line for Chinese restaurants selling good Cantonese-style roast ducks - “best in the world”, they’d say about “London roast ducks”… The reason was simple: British ducks - larger, meatier and fattier than the Asian breeds we’d get back home - simply resulted in incredibly moist, juicy roast ducks. 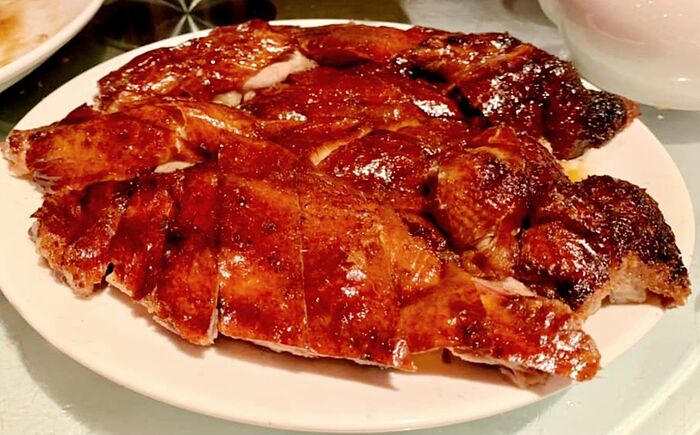 Braised pork shank - one of my fave dishes, and a sinful indulgence. I noticed the version last evening was topped with “fatt choy” (black moss). 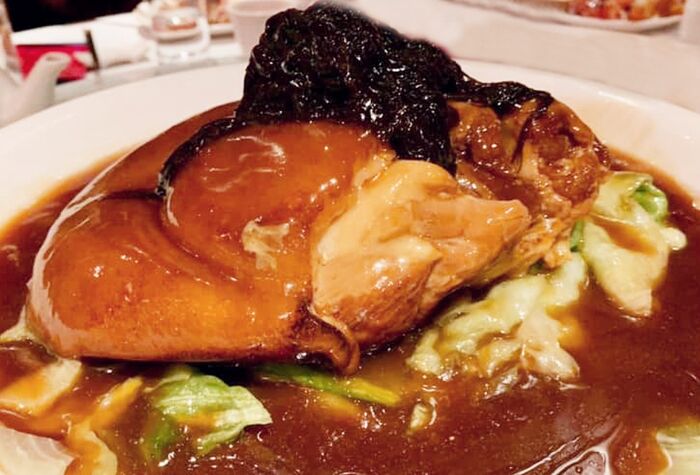 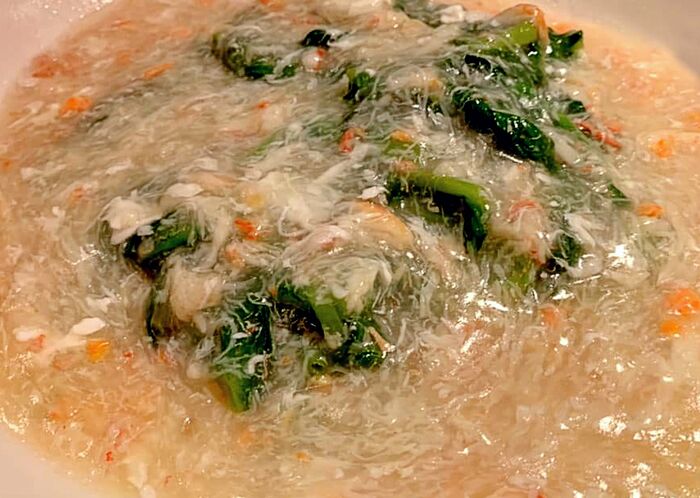 Crispy chicken with garlic crumbs - in case one wonders why chicken was served, after the obligatory Cantonese London-style roast duck course earlier, it was simply because serving a whole chicken during Chinese New Year symbolized family togetherness - it’s become a tradition. 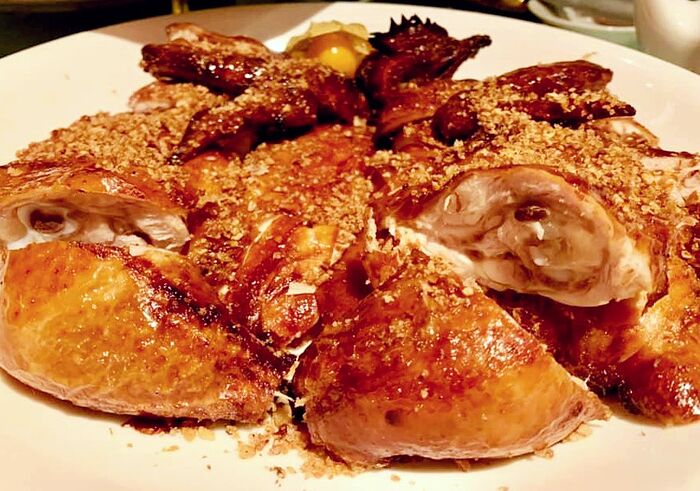 Steamed seabass, Cantonese-style - another obligatory dish to have during a Chinese New Year meal. A common Chinese New Year greeting we wished upon one another is "Nían nían yoǔ yú (年年有余), which translates to “Have abundance (of wealth) every year”. Fish
(鱼, yú) in Mandarin have the same sound and pronunciation as “abundance” (余, yú), so it was considered as auspicious dish to be served during Chinese New Year because of its symbolicism.
For the Cantonese especially, a fish has to be served whole, with head and tail intact, as it symbolizes that every endeavour must have a proper beginning and a proper end. 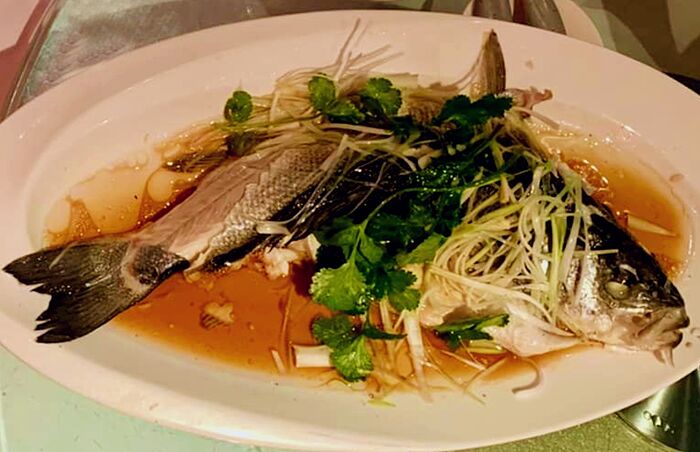 Braised goose-webs with shitake mushrooms - one of my favourite food items in the world: I like chicken feet, but I absolutely adore goose-webs!
Fell in love with the dish since I first had it at The Forum Restaurant restaurant in Hong Kong, owned by HK’s legendary “Abalone King”, Yeung Koon-yat @ Ah Yat.
The version shown in the picture looked uncomfortably pale, compared to the glossy, mahogany-toned ones I’m used to - I hope it’s just the photo.
A good braised goose web should have a melt-in-the-mouth texture, covered with a deep-flavoured, unctuous sauce. 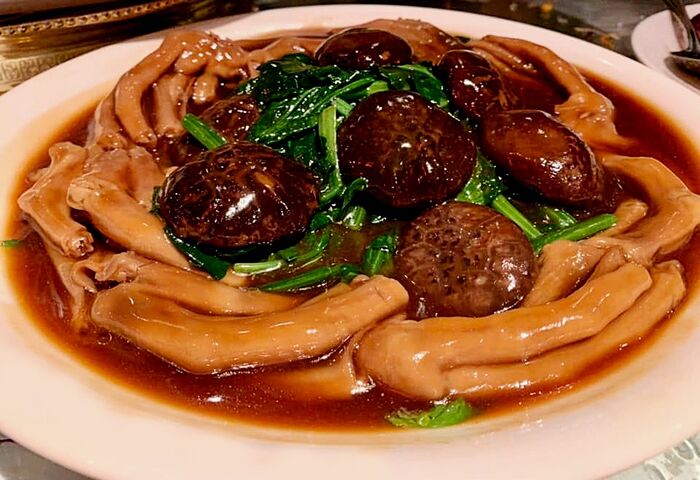 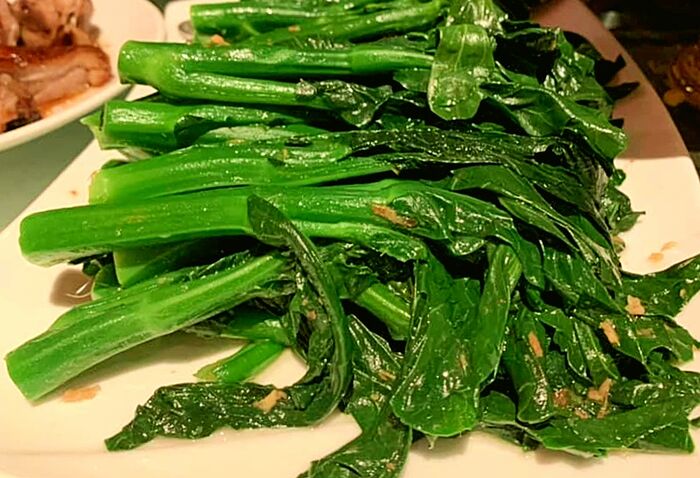 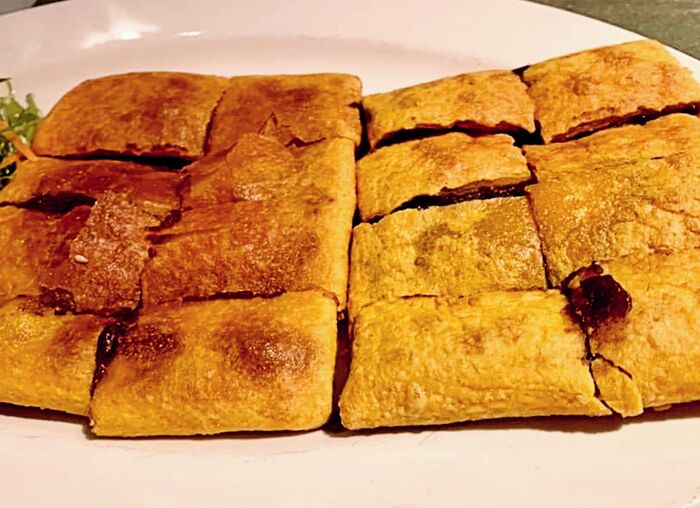 It was a raucous affair, with two prancing Chinese lions adding to the festive atmosphere. 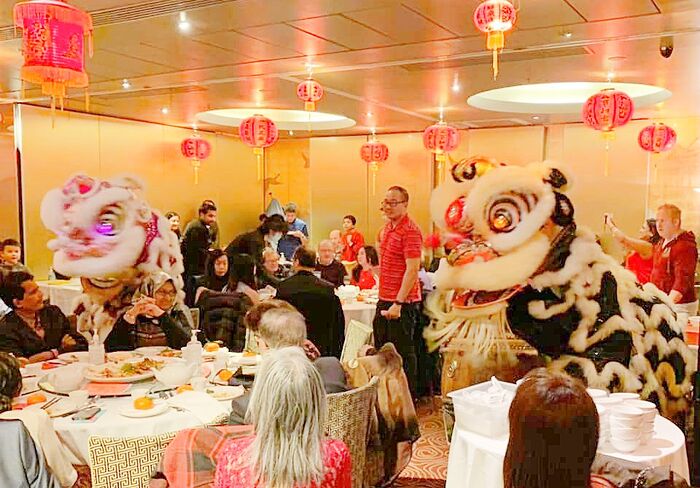 I remembered my first time at Royal China Baker Street was sometime in 2012, when fellow Chowhound, Limster, brought me there. I was surprised then to find that its dim sum were as good, if not better, than those in many places in Singapore! I’d have loved to be there last night.

The lobster, duck, and pea shoots are calling loudly to us.

Everything looks incredible! Maybe you’ll get to go next year.

Yes, of course. SUKA is a social club of sorts - there were about 100 attendees at its Chinese New Year dinner last night, and most are Singaporeans with British spouses or partners. They were all seated in tables of 10 each, so a great way to get to get to know people and make new friends, too.

I remembered being a new member of the Singapore-Turkish Friendship Association three decades ago and attending their annual dinner then - made quite a few Turkish friends on that night, and we are still close today!

Everything looks incredible! Maybe you’ll get to go next year.