Well, Locali finally opened and we went last night. What a great night we had! The space is small but well thought out. The rustic features of the old train station remain, so there’s lots of wood. The front room features a large bar and many tables that are pretty close together to accommodate the small space. There are regular tables and a banquette along the front window where many of the two tops are. To the left of the entrance are 3 large booths that can easily seat 6 each. There is also a small back room that is not quite ready yet, but features the old pew type seating from the old train station.

We went very early - got there at 5:15 and it was already getting crowded. The manager is Frank Bueti - always good to see him and remember him from his days as the chef at Strega in Pleasantville. We were seated at the banquette section. Service was very good considering all they had under their belts was a soft opening over the weekend. There were some glitches with the busers who brought the food going to wrong tables but not that bad. As for the food, we shared crispy artichokes which were reminiscent of carciofi all giudia that we had and loved in Rome, but cut into smaller pieces rather than fried whole. They were in a very bright lemony aioli and served with fresh mint. The coating was so light and crispy, and the lemon was a perfect accompaniment. DH also had the calamari which I didn’t try (and we didn’t order - it was from the manager), but he said they were also perfectly crispy and delicious. For mains we both had the Queen Margherita pizza with fior de latte, basil, pecorino and olive oil. I preferred the fior de latte to the usual fresh mozzarella that most use which ends up to be a few blobs on the pizza. This melted beautifully and the crust was perfectly chewy and flavorful with its patches of black. On a side note, they were not able to install the pizza oven from Italy as they have in New Canaan - some kind of regulation, but their pizza oven worked just fine! I also had them add a bit of fontina to mine - what can I say, I’m a sucker for fontina cheese. We didn’t order dessert, but were treated to their version of tiramisu. It was served like a pudding in a glass. It’s billed as Clarssic Tiramisu, but I would not say that. But it was creamy and coffee and good. I saw other tables with a Valrhona buddino that was making my mouth water without even going near it!

It was also a fun crowd and we were talking to the people next to us. The location is really great for the NYC commuting crowd and we saw several very well dressed commuters stopping in at the bar after getting off the train. I would say that the place is probably not a great place to bring small children. It is so small and crowded I think parents are better off taking the kids to Village Social.

In all, we loved our meal and the whole experience. We will be back!!! 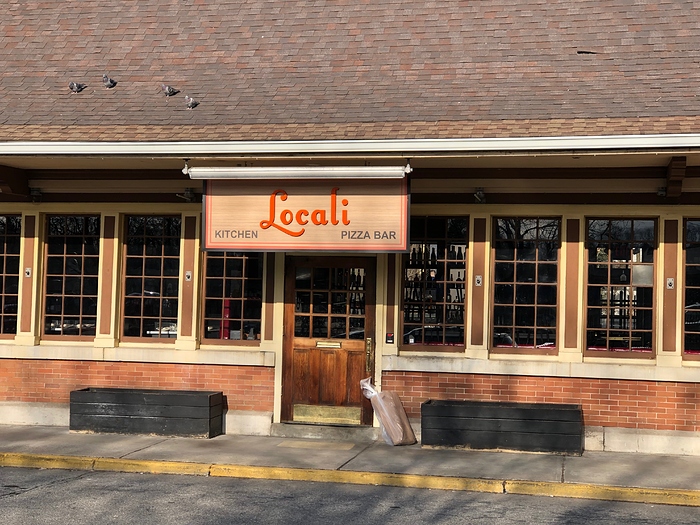 Nice report. Thank you for posting.

Thanks Gwenn. Sounds like a fun and delicious night. Thanks also for your tip about small kids. Guess we will wait on this one for a while. Or are they open for lunch?

They are not open for lunch yet, but I believe they will be. They have a kids menu, and there were a couple there when we were there but they were quiet. It was really just my opinion, because it’s not discouraged, it was just an observation.

Ah ok. Thanks. The baby is quiet till she’s not, haha! Good call on Village Social though, maybe we will try that for lunch with her soon. There are always kids there and it’s so loud she wouldn’t be a nuisance if she did get chatty.

Exactly!! But you should try Locali when you can.

Thank you, Gwenn! Sounds great. I adore that crispy artichoke dish from Italy! Gotta get there soon.

I just need to say that I still love this place! We have been there several times now and it has fast become one of my favorite restaurants. The staff is so friendly and welcoming, and the food is terrific. I had pizza, of course, but we shared the crispy baby artichokes which are tender and the lemon sauce and mint are a perfect touch. Then DH had the strip steak, cooked perfectly and served with a head of roasted garlic - so sweet and delicious, and crispy potatoes which were perfectly tender inside and crispy crispy on the outside. And prices are very reasonable, for Westchester!! Can’t wait till next time!!!