So, there has been a rise in Pakistani tourism, many famous food vloggers that I watch have traveled to Pakistan. I have been curious about the local dishes that I can find there. I have read articles to gain more knowledge. I am mentioning them here so you can get an idea as to what I am expecting.
Frogtok
Migrationology
So anyone who has an experience of the Pakistani food. Would you care to help me? Thanks

Unlike many parts of the sub-continent, meat features quite hevaily in Pakistani cuisine, so expect to come across seekh and shami kebabs. Tikka is a traditional spicing in the Punjab province used with chicken or lamb/goat. In the western part of the country (in particular), you’ll come across haleem which is similar to an Iranian dish called halim.

Just sharing some breakfast dishes I had in Islamabad and Lahore during my last trip there in 2014-2015. The food in both cities, in the northern part of Pakistan, are generally less spicy than the ones in Karachi in the south of the country. In fact, one can discern the level of chili-spiciness increasing as one travels from the north to the south of Pakistan. 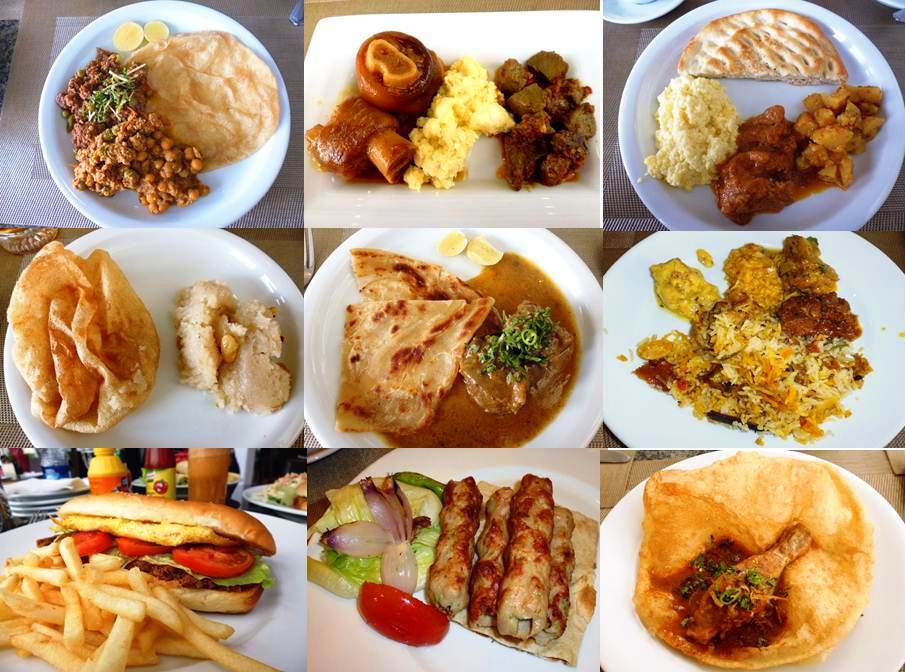 Some of my faves:

Lunch at Lakhnavi in Lahore. This is a beautiful restaurant set in the palatial Avari Hotel. It specialises in the region’s haute cuisine: Lakhnavi, which blends Mughal and Persian culinary traditions that dated back to the 18th-century. 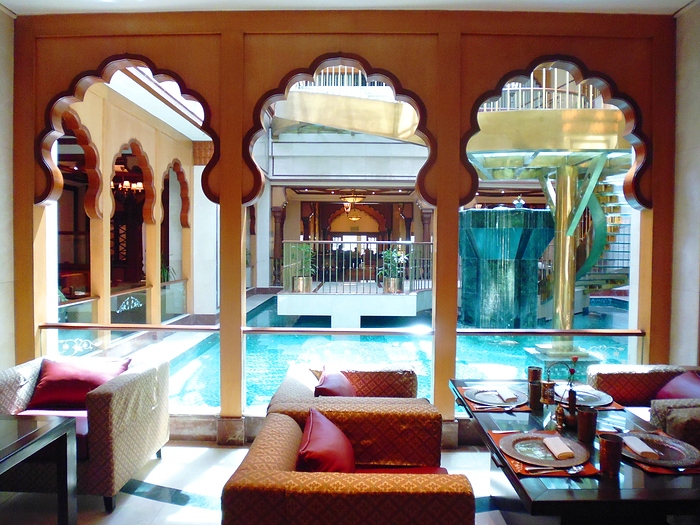 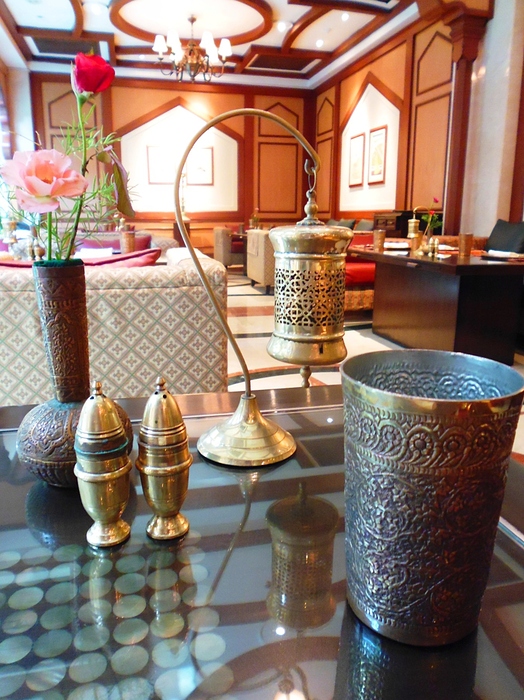 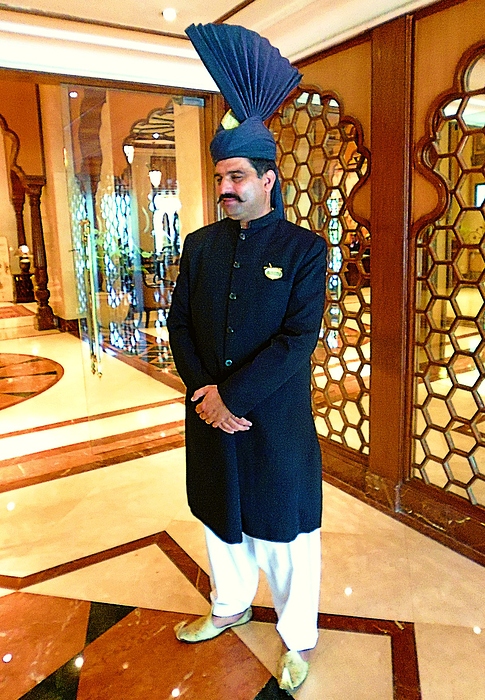 My lunch consisted of: 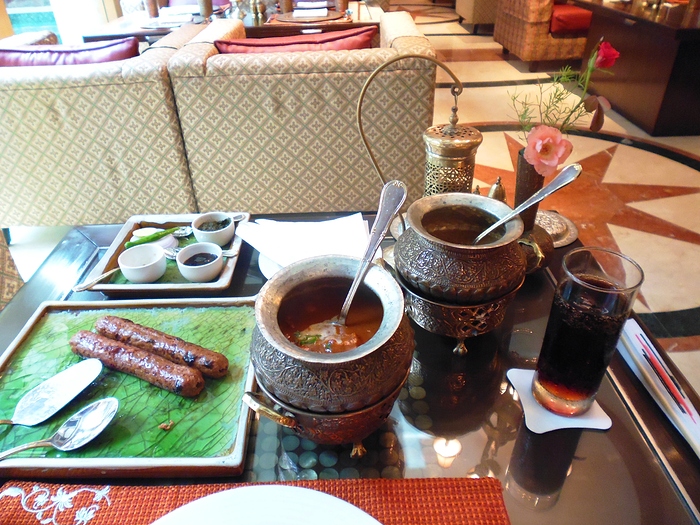 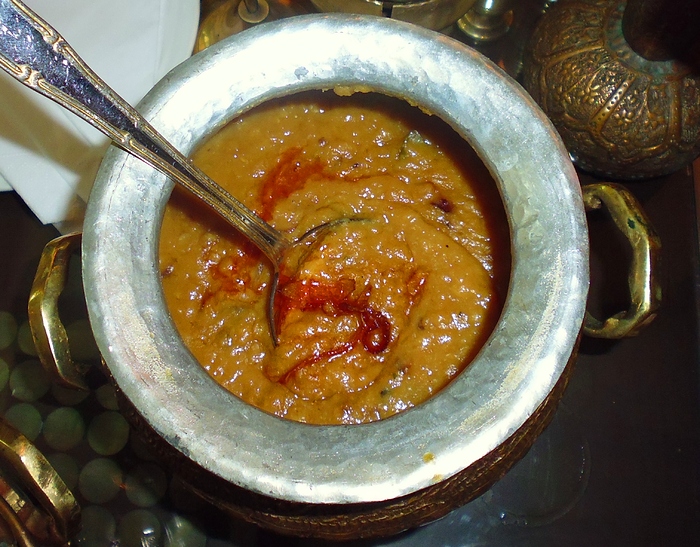 Supper at Muhammadi Nehari in Lahore. This is the real stuff - from one of the oldest and most popular nihari spots, situated near a busy intersection in the centre of Lahore’s old city (Address: Bahawalpur Road, Mozang Chungi, Lahore-54500, Pakistan. Tel: +92 4237239509)
The bakers crouched on a platform set atop huge tandoor ovens where they bend down to bake the flatbreads: 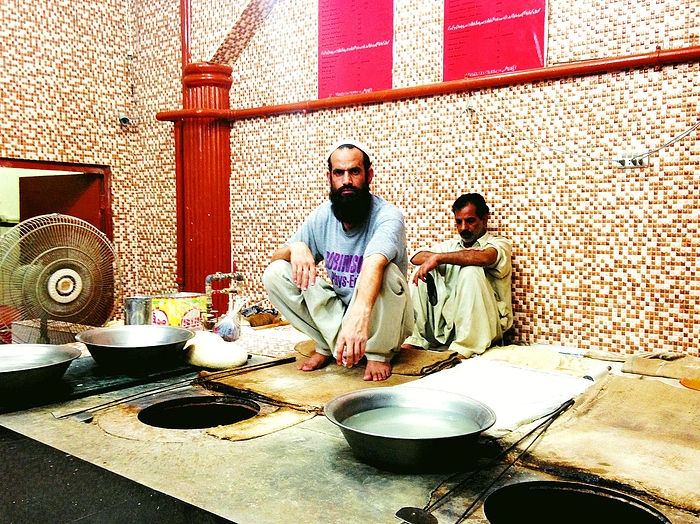 Nihari is essentially a thick, spicy beef stew cooked gently overnight, resulting in melt-in-your-mouth beef in an intensely-flavoured, oily gravy. There are several nihari options on the menu at Muhammadi Nehari - we chose the “house special” nihari with “nali” (marrow) and brain. Accompanying the nihari are roughly julienned ginger, chopped fresh coriander leaves and slivers of small local lemon, to be squeezed over the stew.
It was utterly, lip-smackingly delicious! 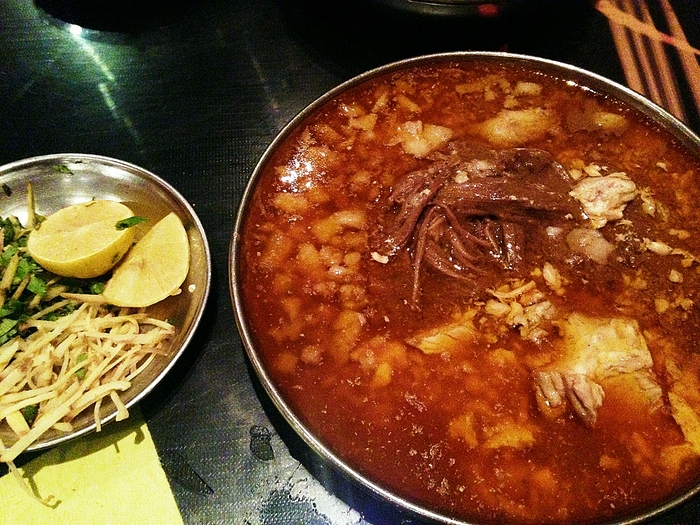 We ordered two types of local breads: a slightly sweetish, milk-rich Taftan, and a spongey Sheermal Naan. The Taftan was extremely addictive. 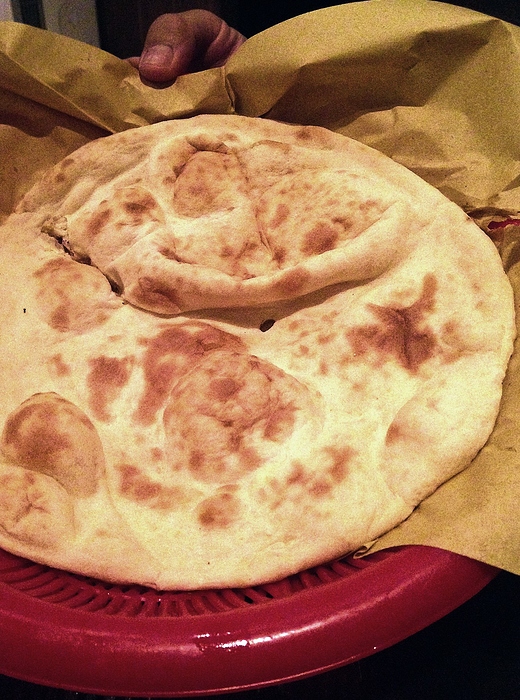 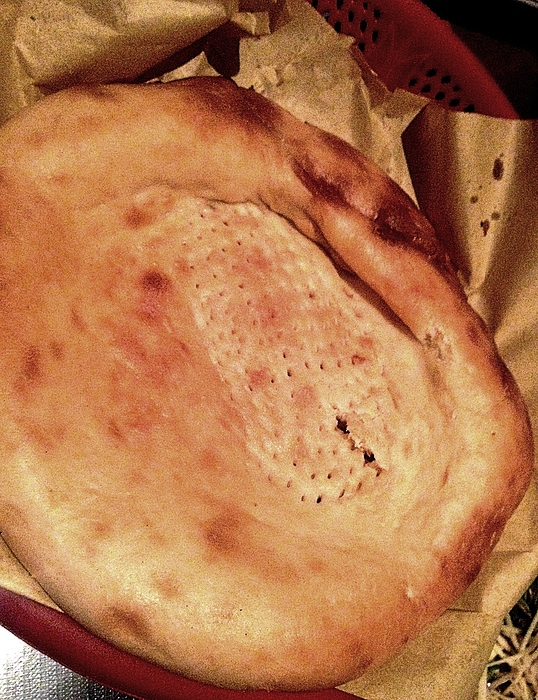 I really enjoyed this meal although, strangely, my Pakistani colleague who accompanied me called in sick the next day - he said he had tummy problems from the meal!
Earlier that day, we were also at Wagah, the town straddling the Pakistan-India border, to watch the daily flag-lowering ceremony, where border guards from both countries stared down each other, stamping dramatically and even shaking fists at each other. It was all very theatrical as both sides had huge spectator stands filled to the brim with noisy chanting onlookers. 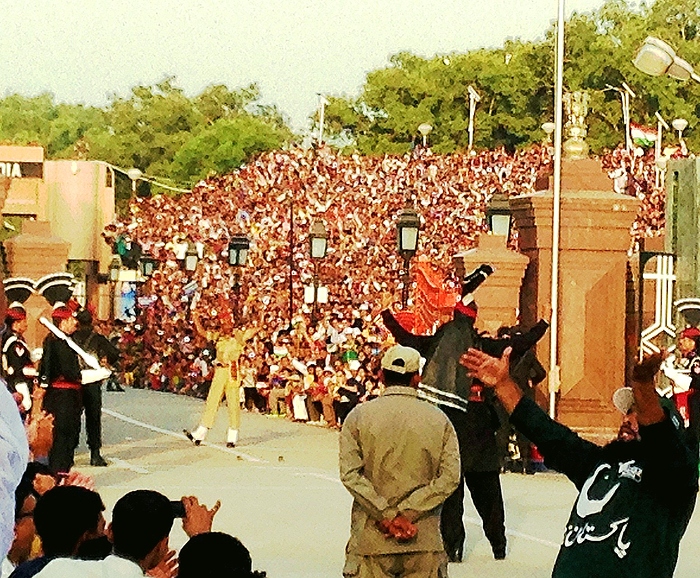 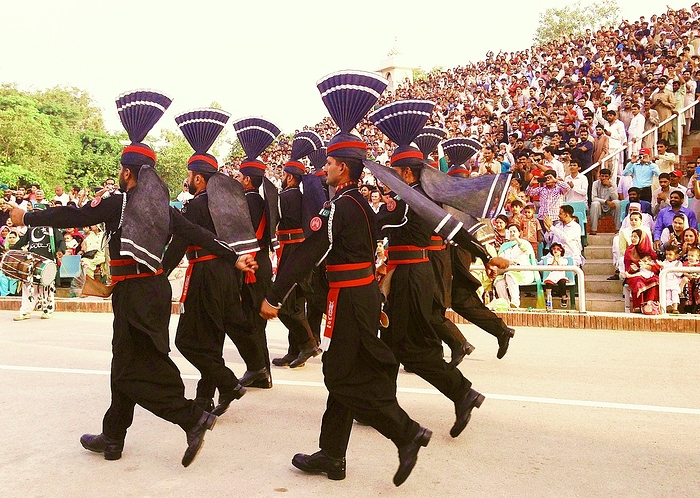 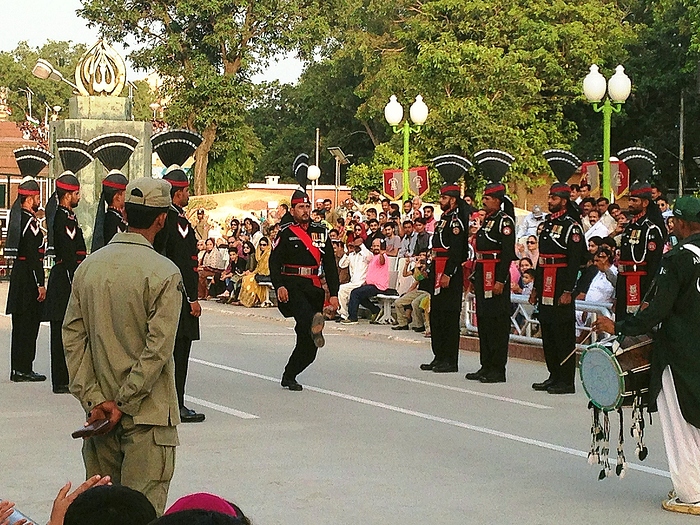 Michael Palin visited Wagah on one of his travelogue films. 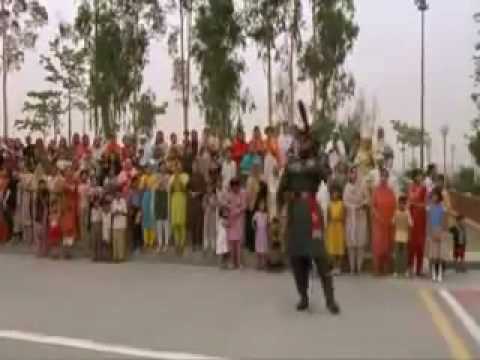 Peter - I was surprised to see the several beef dishes. I would have assumed that lamb/mutton would have generally been used. Was the beef just a co-incidence or is it actually quite common? I suppose that, in Pakistan, there are not the cultural sensitivities Indian Muslims might have towards their non beef eating Hindu countrymen.

Peter - I was surprised to see the several beef dishes. I would have assumed that lamb/mutton would have generally been used. Was the beef just a co-incidence or is it actually quite common?

Beef is actually quite common. Since the Pakistanis are Muslims, I guess they don’t have the sensitivities with regards to beef like Hindu-India does.

That said, the mutton/goat/sheep meat at Pakistan tended to smell and taste rather gamey, as compared to what we’ll find in the UK or elsewhere. Oftentimes, the spice marinade was barely enough to cover the smell.

It got worse once for me when a local colleague took me to Khiva, a restaurant in Islamabad specialising in Pashtun, Uzbek and Central Asian cuisine. Here, the only spice used was pepper, and a bit of salt! My colleague’s grandfather was a Pashtun tribal chieftain in the region near the Khyber pass with Afghanistan, so the food there suited him to a ‘t’. The veal was so tough, you can imagine Attila the Hun keeping it under his saddle whilst riding the whole day just to tenderise the meat before eating it. I was content to just sit there watching him eat whilst I push a lamb testicle around my dinner plate.
Just kidding, the other dishes were fabulous. 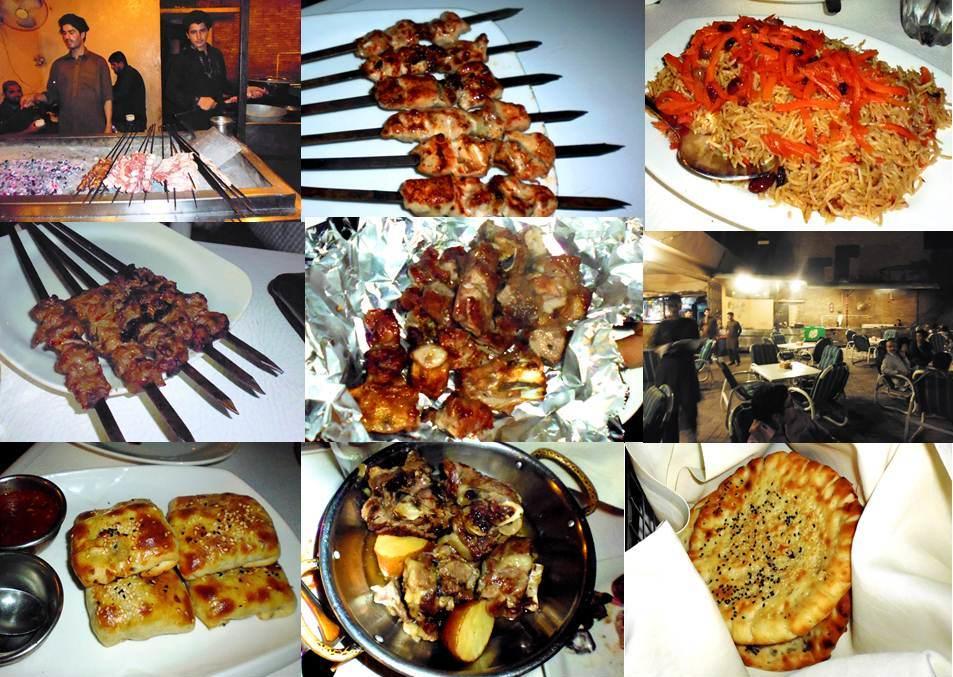 Michael Palin visited Wagah on one of his travelogue films.

It was a fun experience. The larger Indian crowd chanted Vande Mataram (“Mother, I bow to thee”, in reference to Mother India) and Jai Hind (“Victory to India”) whilst over on the Pakistan side, the crowds screamed Allahu Akbar (“Allah is Greater”) and La ilah illa Allah (“There is no god, except Allah”). The spectators literally worked themselves into a near-epileptic display of patriotic fervour.

The guards on both sides were pretty tall: at least 190 cm (6 feet 3 inches) in height, as a minimum requirement.

@klyeoh paints a great picture. Although being Pakistani you might think I could give you a better idea, but 3 long trips to China in as many years have taught me that an “outsider” can often experience and distill a culture in a completely unique, yet legitimate, way.

This is a difficult discussion for me to have online. I have far too much I want to say and structuring it would take a long time. (And most of it would be irrelevant.)

In general, avid food lovers like those on this forum are rare everywhere. So many cultures used to be all about their food – Japanese, Thai, Chinese, Indian, Pakistani, Italian, French, etc. – yet in the present day I would trust anyone on this board over the average person from these cultures, and it’s not even close. For example, I would trust @klyeoh over the average Pakistani walking down the street who tells you she knows the best haleem place, it’s just like her grandmother made, and her family’s patronized it for over 15 years, etc etc.

From @klyeoh’s pictures, the only ones that really brought me back to summers I would spend in Pakistan, when it really was all about the food, was the nehari.

Also, the same dish cooked at home can be different from restaurant food. For example, traditionally nehari was beef based, but home cooks started making chicken and lamb versions.

In Punjab, beef is not very common in home cooking. In fact, I had beef maybe a handful of times a year growing up. My cousins would joke that you only get beef when a cow falls dead on the road, that’s why you have to cook nehari all night to make it safe to eat. My aunts always made ground “beef” with goat meat. I always thought this beef aversion was a carryover from Hindu tradition, but I’ve never researched it.

Yes, goat/lamb meat is way gamier in Pakistan. If you get local lamb or goat in America, it’s actually gamey, too, much more than the regular goat/lamb , which is gamier still than the imported meat from Australia and New Zealand that we are getting used to now. Next week is Eid Al-Adha and we’ll drive to a farm in Western Maryland to sacrifice a goat. It will cook differently than the regular goat we get from the Halal butcher. Likely, we’ll have to use a pressure cooker.

I agree food in the north has less heat and spice, but I’m not sure if I would say Karachi packs more chili-heat than Lahore. I think, in general, modern palates are much “wimpier” than before. In fact, the most surprising change for me in modern Pakistani food has been the lower heat levels The excuse is always, “Think of the children!” People can eat what they want, etc. My issue is many of the dishes’ flavor profiles fail without heat.

I find the average food of Punjab’s smaller towns much more interesting than Lahore’s food. If you can escape the big cities, you can experience something different from the regular stuff on the Internet. For example, you can find mithai (sweets) shops where all the sweets actually taste unique and different, not just like sugar and milk. But these shops days are numbered, just like the cheesemakers in Europe. What I wish I could do is explore the food of Sindh and Balochistan. However, my family acts like these places are the Wild West. Heck, most of my family would be scared to eat in that nehari shop.

I warned you, I would ramble and hardly any of it would be relevant. Also, by next week, I’ll have completely different opinions about stuff, so don’t quote me.

I would trust anyone on this board over the average person from these cultures,

I contribute to one of Tripadvisor’s Spain forum. A particular restaurant often gets recommended because “all the taxi drivers eat there”. I have given up asking if, at home, they would ask a taxi driver where to eat. I know, of course, that they wouldnt.

For example, I would trust @klyeoh over the average Pakistani walking down the street who tells you she knows the best haleem place, it’s just like her grandmother made, and her family’s patronized it for over 15 years, etc etc.

It’s the same here in Malaysia/Singapore, or anywhere else in the world for that matter: oftentimes, one would claim a certain place is the best for a certain dish, but it’s really because that person has an emotional attachment to that place - sometimes, not just the taste of the dish which suits his/her palate the most, it could be a sentimental hometown spot, or a favourite venue for special occasions or celebrations in the past. Many a times, a set of factors contributed to why & how a place became one’s favoured spot.

Here in Penang where I am, when I ask 5 local Penangite foodies which is the state’s best “char koay teow” spot, I’ll often get 5 different answers, and each of them would argue for his/her choice.

My last meal in Pakistan before I flew off the next day was at Shahzada Khan, a “dhaba” (roadside eatery) along the main street of Taxila, a 1,200-year-old city in the Khyber-Pakhtunkhwala region on the Afghanistan-Pakistan border.

I was at Taxila to visit the old Buddhist archaeological site and a beautiful museum full of Gandharan art dating back to the 1st-7th centuries CE. 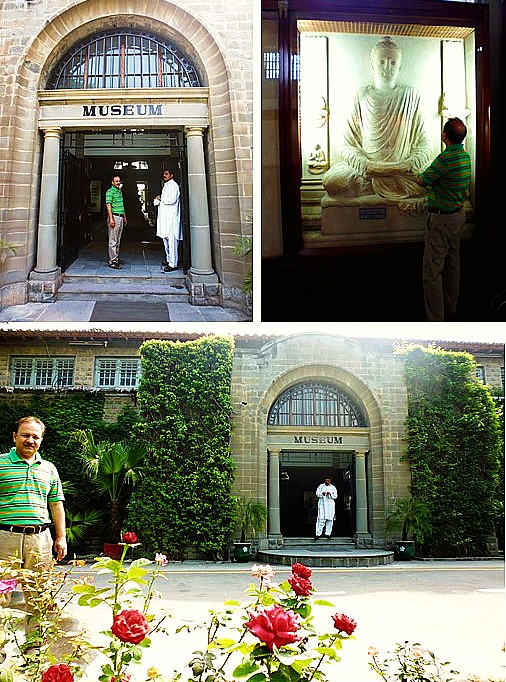 On the way back, my colleague and I decided to try out Taxila’s street food. The main street was really busy with vehicles, some pretty decorative. 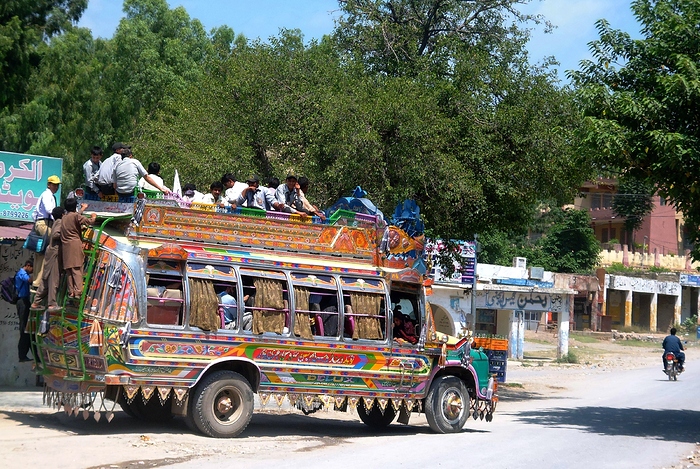 Shahzada Khan’s got a very interesting “seating” arrangement - the locals seemed to like to lie or recline on charpai beds whilst eating: 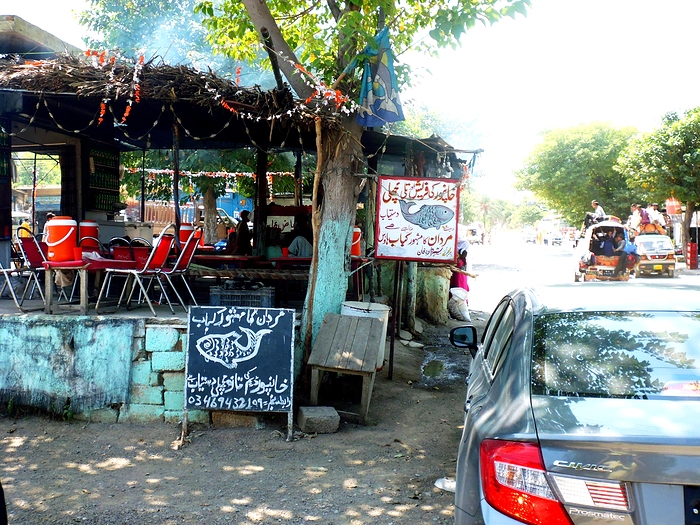 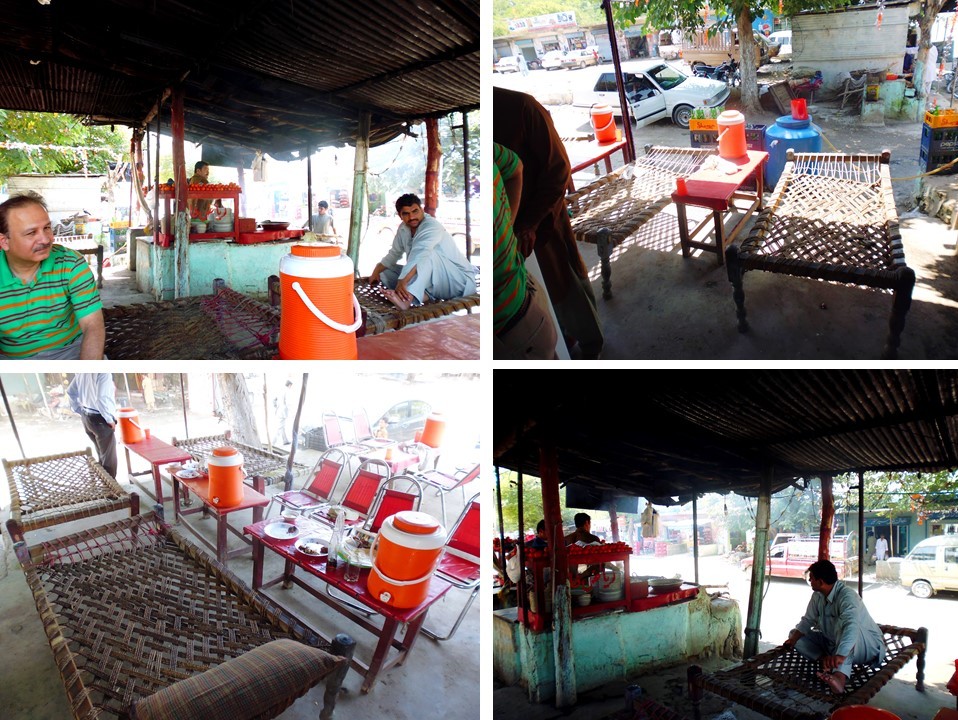 We ordered two items, both freshly prepared in front of us - “Chapli Kabab”, a burger-like lightly-spiced beef patty; and their house specialty: crisp-fried freshwater “rohu” (carp). 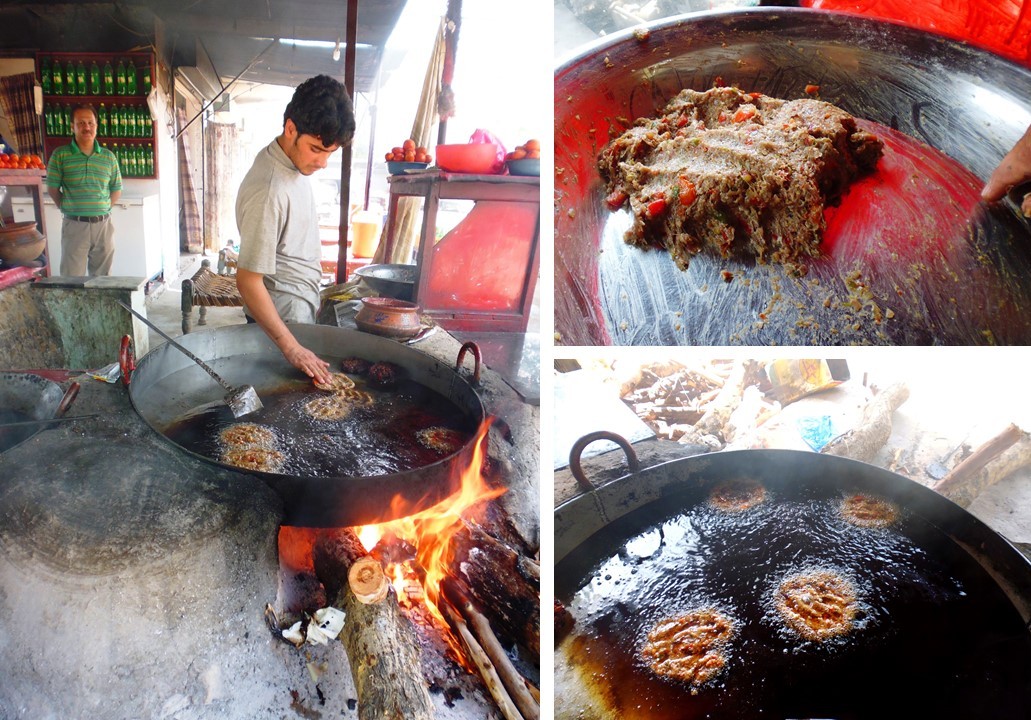 The burly sushi chef with his lethal-looking knife. 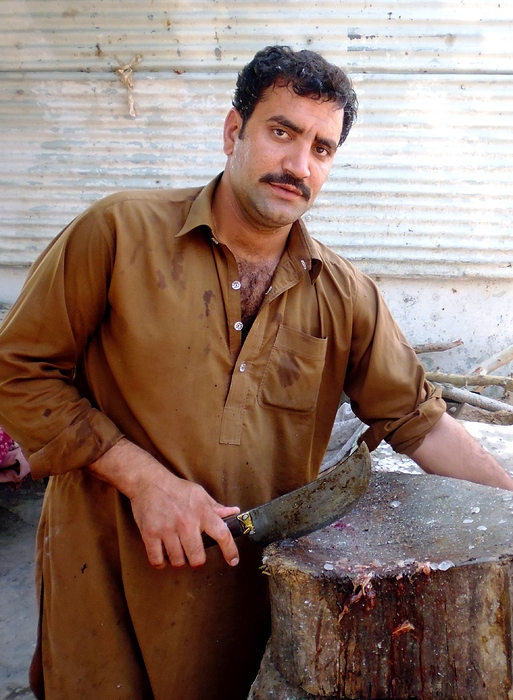 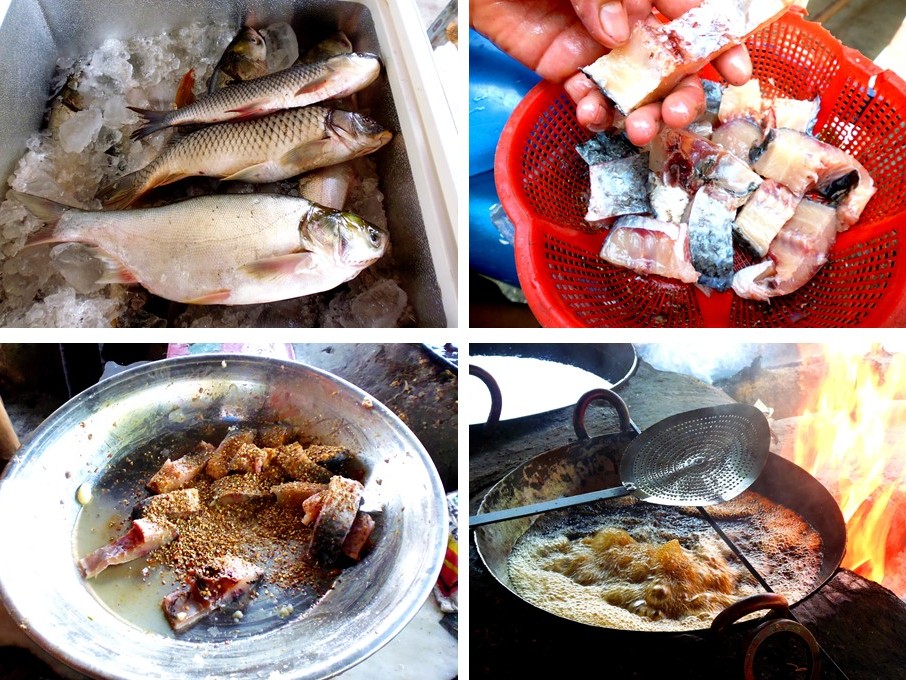 Both items are served with “naan” bread, and a lemon-yoghurt dip. 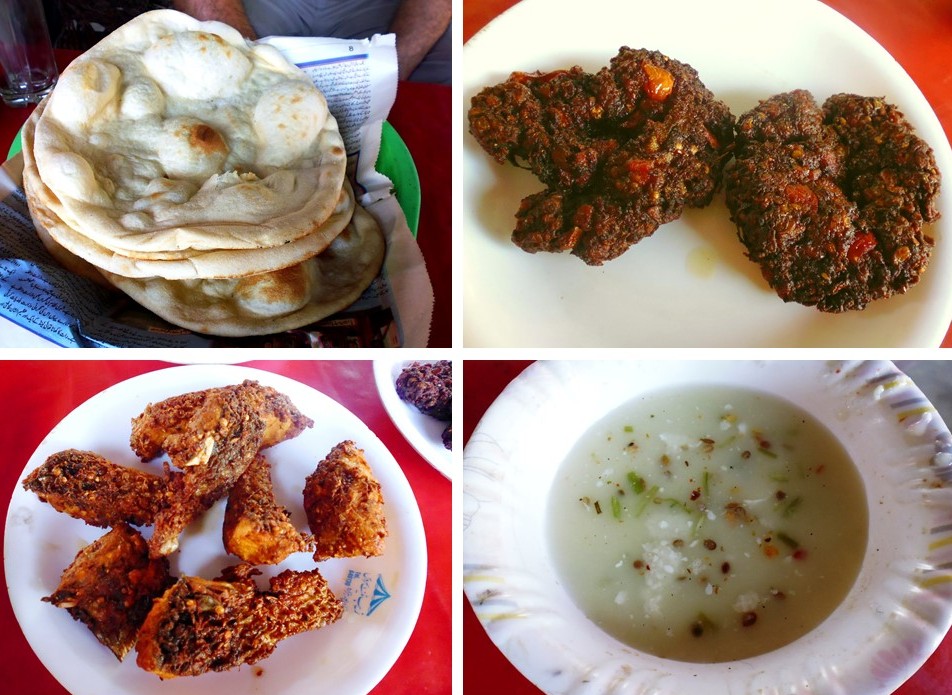 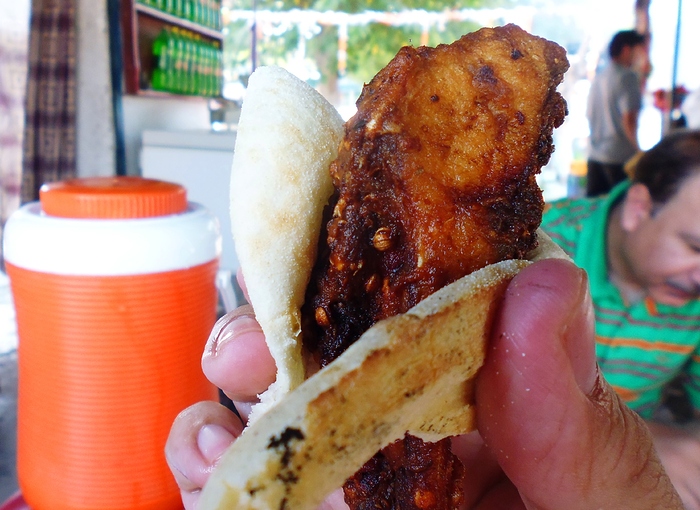 In Pakistan, Pepsi rules in the battle of the Colas. We see Pepsi banners and billboards everywhere, but zilch for Coca-Cola! 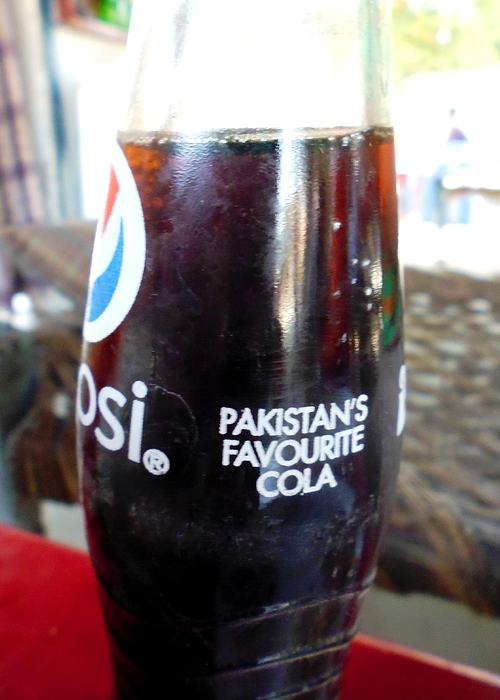 The sign says the fish is from Khanapoor Dam and that this is Mardan’s famous kabab house. I’m guessing Mardan is the name of the region you were in. Sounds familiar.

Looks great! I havent had that type of fish fry in a very long time. Freshwater fish is hard to come by in Punjab these days. It’s so expensive and difficult to source, most people just go for farmed.

The sign says the fish is from Khanapoor Dam and that this is Mardan’s famous kabab house.

Ah, now I remembered that my colleague took me to see a dam right after the meal, and was told that it was where the fish came from. 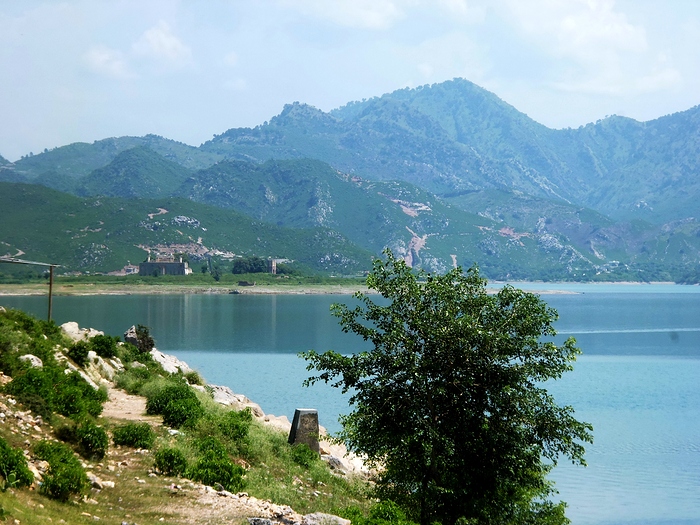 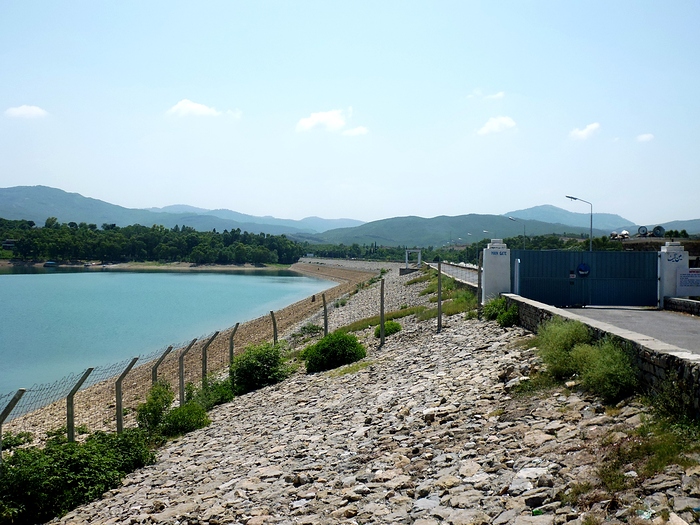