Actually they were showing up in the mid to late 70’s as we used to survive on them during several part time summer jobs in high school. Pick 'em up in any convenience store and throw 'em in the convenient on site microwave oven; (button 3 as I recall). Along with a quart of lime Gatorade and I was good for another 5 or 6 hours.

I still make them pretty regularly. Good use of leftover pintos or black beans. Sometimes with rice, sometimes without. Proteins and accoutrements as scrounged in the fridge.

Editor’s inside note, you can get to go portions of that insanely good tartar sauce at the salad area, just ask and they’ll give you pretty much all you want.

unappetizing to say the least, my opinion.

Unless of course it’s the burrito supreme from Taco Bell, which is the only burrito I’ve ever had. I remember most fondly the Frito Burrito Supreme.

I think his opinion that burritos are tacos is just a function of his preference for tacos (so he sees burritos as subordinate, rather than their own thing). The quote that leapt out at me:

I don’t understand why you would want to eat something that big in one sitting.

What is this guy, from Mars? Why on earth would anyone not want to eat anything that big in one sitting?

Pick 'em up in any convenience store

This reminds me of a food challenged co worker who was craving, craving mind you a chicken fried steak sandwich from a Valero store.

Oops, just got auto scolded for too many responses to you. Does this mean no more meet ups including overcoming my phobia of Katy?

Meh, let me know when they start deleting your posts.

That’s when you know you’ve “arrived”. 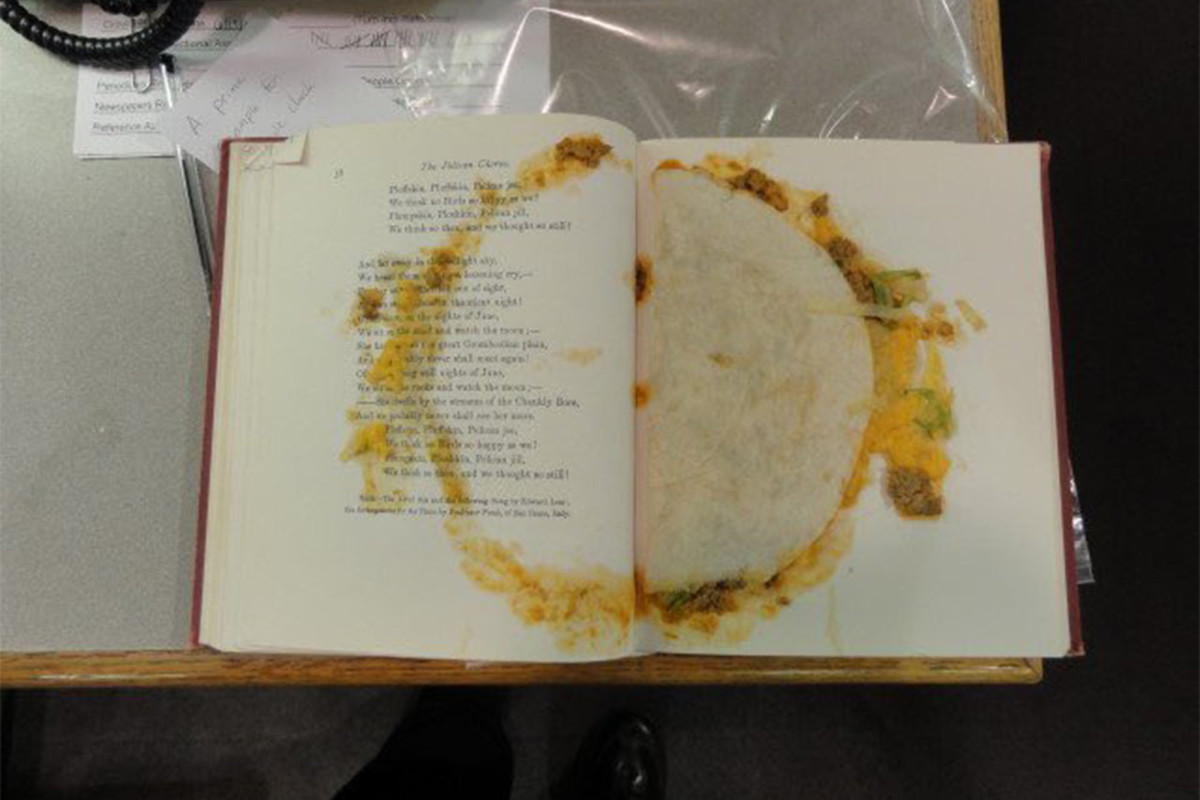 This must have really been something to taco ‘bout. An Indiana librarian tweeted that she found the most unusual bookmark between the pages of a book dropped off at her library — an entire taco. “D…

A taco IS flatter and smaller and thus a superior bookmark…

But now I’m going to pour a little gas on the fire.

And tacos ARE sandwiches.

Where can I get a GOOD reuben taco?

I proudly stand by the fact that I’ve eaten only one burrito, a freebie, and refuse to eat another.

…and refuse to eat another.

Take an extra large flour tortilla, add your usual taco ingredients of choice but double the amount of each ingredient then roll it up like one of your “clove” cigarettes and “Voila” - Burrito!

As for a Reuben Taco, while all tacos are sandwiches, not all sandwiches are tacos. But Hey, why not?

Take a fresh flour tortilla, spread some Russian dressing, (or just some spicy brown mustard), add chopped corn beef, slather on some sauerkraut, roll it up like one of your…

No No No, just fold and eat!

That sounds pretty good. Me? I insist on rye bread and if I could find a rye tortilla, I’d use that, but you do you. No judgement here.

And tacos ARE sandwiches

You lost me at the giant flour tortilla, I want no part of them. I like all the ingredients separately but refuse to roll up the high quality fajitas and carnitas my discerning palate demands with a bunch of rice and beans.

I eat only beef fajitas, next thing we know you’ll declare chicken, shrimp, and veggies can be used for fajitas when everyone with a Tex-Mex brain knows they’re not.

I will on occasion get risky and mix some of the highest quality rice and refried beans together and enjoy them. I will also eat a tortilla or two with the meat and salsa, high quality of course.

High quality is the key here and there are only two Tex-Mex places out of the billion in town that can pull this off with chips and salsa a deal killer if they’re not up to par.

I retired recently and no longer have to worry about clove testing.

Have you tried the new cloves?

while all tacos are sandwiches, not all sandwiches are tacos.

Thanks for the Aldi update. I’ll be there opening day for sure.

like all the ingredients separately but refuse to roll up the high quality fajitas and carnitas my discerning palate demands with a bunch of rice and beans.

El Tiempo on Washington where we’re known and respected unlike some of the people here.

El Jardin Harrisburg deep in the barrio in the shadows of the looming Ship Channel bridge. Go for the 11-2 shift when it’s mostly white folks. We prefer the post 2 shift when the Hispanic families arrive and I have street cred with the Wifeacita.

spread some Russian dressing, (or just some spicy brown mustard),

I’m a dressing guy with a squirt of that yellow mustard. I’ve found I can make a good 3-4 reubens at home for the price of one at a deli.

I retired recently and no longer have to worry about clove testing.

all sandwiches are tacos.

Oh, so NOW tortas are mere SANDWICHES? Peeshaw. Get out.