Dona Saudade is run by chef/owner Miguel Reduto, and his assistant Jacinto. We stumbled upon it one night, intrigued by its look and sound: warehouse-y/found objects/art space, cool music pouring out the door. It is spacious yet warm, and the artwork on the walls by local artists changes periodically. But the real warmth comes from Miguel and Jacinto. The two made us feel incredibly welcome, as if we were having a few drinks in their home. Which is exactly how Miguel wants it.

He told us the story of the building. It was once actually first a coal, then a banana warehouse, then a tavern. Dona Emelia - who is still Miguel’s landlady - opened a café there about 50 years ago, a haven for left-wing rabble rousers. Her chair – the chair where she was fed as a child – still sits in the bar/restaurant. This is the essence of the place: Miguel named the bar “Dona” (“Madame” or “Lady”) in honor of the woman, and in honor of taverns of the time. People wouldn’t say, let’s go to “this-and-that restaurant;” they would say, let’s go to Dona Maria’s, or Dona
Emilia’s, as if you were going to someone’s home to eat dinner. And he chose the word “Saudade” for his tavern’s name – a word that means a melancholy longing in the soul – a longing
for the past. Don’t expect to rush in and out of here. Miguel wants you to come into his place, his home, and stay awhile, to not be in a hurry, to linger and chat over a drink, over a petisco (snack), or over one of his wonderful dinners.

It took me a couple of visits to realize that Dona Saudade actually has a full menu; we’d just been downing gin tonics and vodka shots until closing time every night. I told Miguel that we were going to try his food and he said, yes, good, I will make you a special menu!

The next evening, Miguel went over the menu with us meticulously. “I want to have you try
some things that are typical flavors of Portugal.” After a bit of back-and-forth, our dinner
carte was complete: First, a wrap. A wrap??? Yes, a wrap, with bacalhao – the ubiquitous Portuguese staple of salted/dried cod, soaked in water, and then cooked – or not. “In this dish, it is raw.” I was very skeptical – not about the raw part, but the concept of a wrap for dinner. A wrap at any time, really, is not my cup of tea.

I was so wrong. The wrap was delicious, and one of my favorite bites of the entire trip. The first taste was olive oil – a very delicious, aromatic olive oil. Then the bacalhao - cool, slightly salty,
delicate, and with crispy bits of fried garlic. Lettuce & tomato added crunch and more freshness. A really wonderful starter. The BF doesn’t even like fish, and he deemed it “tasty!” I got to eat most of his.

Next, soup, the famed soup of the Alentejo region: Açorda Alentejana - really, peasant fare, invented out of need during lean times to use up leftovers. The soup consists of a broth made of only water and salt, nothing more. A thick slice of stale, hard bread is placed in the bowl, an egg is lightly poached in the broth, then placed delicately atop the bread, the broth poured over, add a crushed clove of garlic, a few drops of piri piri (Portugual’s gift to the hot sauce world), a few sprigs of coentro (coriander, or what we call cilantro), and whole lot of very high quality and aromatic extra virgin olive oil. Olive oil is the key, it was the first thing I tasted in the dish, and next the garlic. Miguel and I discussed how much olive oil is in the dish, and he said “a lot, more than you think you need.” But of good quality, yes? “Yes, of course. For us, in the Portuguese kitchen, the olive oil and the wine are the most important things. If you don’t have good olive oil and good wine, don’t cook.” You then break the runny yolk of the egg into the broth, swirling it around, so that the olive oil and egg create a creamy base, and take bites of the bread. Wonderful!

Following that, we would have either codorniz – quail – or a Folhado de Morela com Ananas – a puff pastry stuffed with blood sausage, and accompanied by grilled pineapple – or both, depending on how full we would be. I didn’t know the soup would be so filling, so it was perfectly fine that when the time came, Miguel offered up the last quail he had to another table that specifically requested it. As for the Folhardo, it was really good, and would have been more so if we had not already been so full. The soup was deceptively hearty, even while the broth seemed so light. The blood sausage itself was cuminy, and the pastry shell light. The pineapple was a perfect tart/sweet contrast to the sausage.

We were full, but Miguel was not done. He insisted we try not one, but TWO of his
desserts. One, a pudding, , a bit like flan, but without the bitterish, caramel topping, which was incredibly rich – 17 eggs! Miguel said – and very eggy tasting. We were so full, but we finished all of this. And the other, a dish I’d seen in other restaurants but had not tried – a huge baked apple, cooked until it has almost dissolved, but still keeping its form, swimming in a pool of Jeropiga, a
sweet, Portuguese wine Miguel had poured me the night before. Once again, you stir the apple into the sauce, almost creating a sweet soup. Wonderful, but we were way too full to appreciate it fully.

Another night: I had the wrap again – it was that good. So fresh tasting, so light and flavorful! The BF had a stuffed mushroom, which he had wanted to order the first time, but Miguel was bent on giving us the full Portuguese experience. This mushroom dish isn’t a typical Portuguese one, but it was spectacular. Stuffed with spiced ground beef, and napped in a tomato-based sauce, in which the portabella had also cooked, giving off its own mushroomy flavor, and surrounded by perfectly roasted, buttery potatoes, it was divine. Miguel’s partner brought us bread to soak up all the juices, and I actually tilted the dish to my lips to finish off the last, succulent drops. 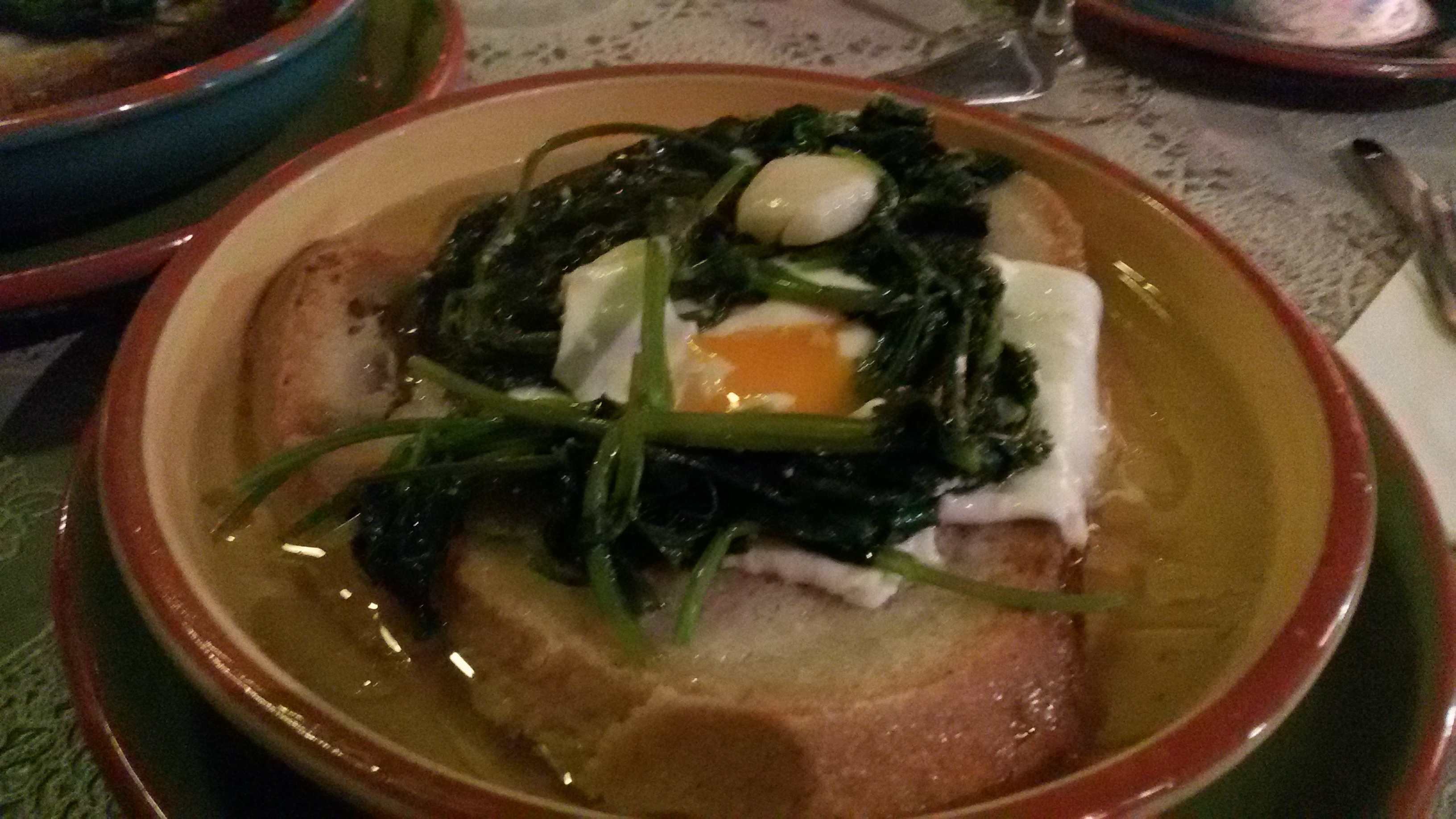 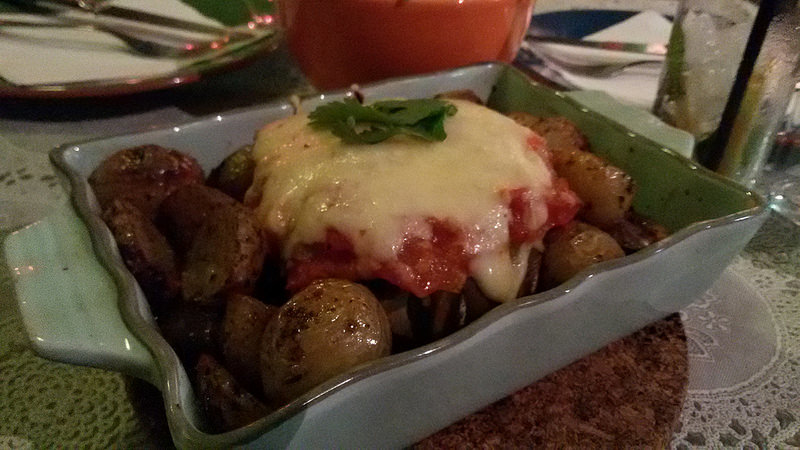 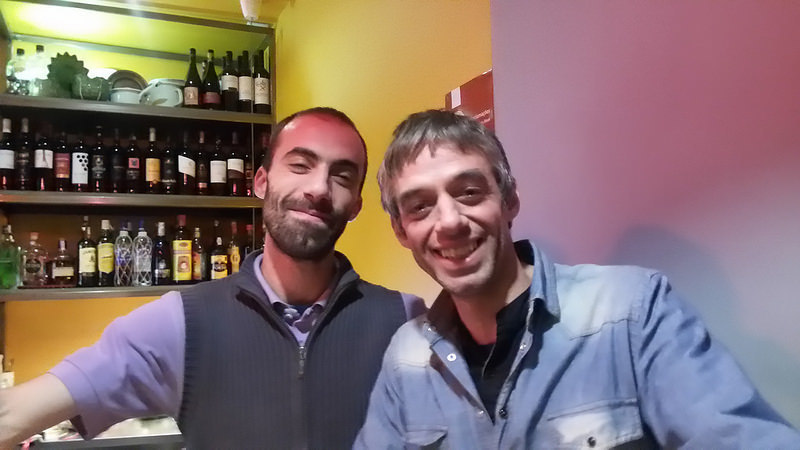 Great review, MC. I feel as though I was sat there with you.

Everything sounds so tasty! Thanks for the story…indeed a fun place.

17 eggs pudding! Do you have the name of this dish?

Sorry, naf, the menu even said “pudding.” it was eggalicious!

Presunto! now i know what your name means! obrigada!

Presunto! now i know what your name means! obrigada!

Haha… yeah, I mentioned that in my very first post on here.

I’ve read your blog entries about the trip but looks like it’s not complete yet, is it?

Here are my relatives with whom I met up in Lisboa. 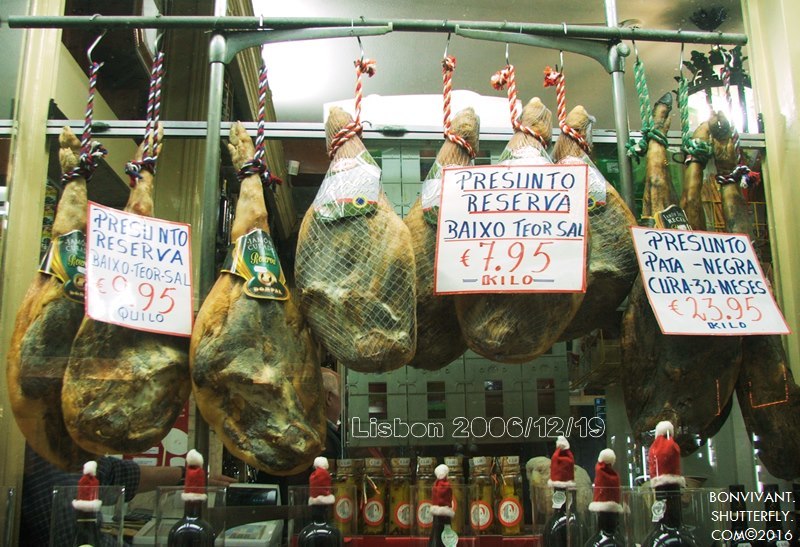 Fab report, mariacarmen–we went to Lisbon in September 2015 and I just adored it. Now I have another place to add to my list when we return.

Thanks pane! It is a wonderful place, isn’t it? I’m definitely looking forward to going back.

haha! just saw this! I have been lax about completing my blog entry, but i will do it!! thanks for reading.

you have a lovely family!