I made a pie today and thought it would be interesting to talk about the pastry. Do you make your own, or do you buy the ready crusts?
For those who make their own, what is your favorite fat to use? Do you have any special techniques? I do make mine, and have 2 methods I use.

Let’s talk about it!

I either used to make extraordinary pie crust…or our son’s girl friends were all super politic, since they all begged for my recipe.
All butter for most uses, but butter and lard for apple pie.

But in my dotage, I have started using Pillsbury refrigerated rounds. They are so simple to keep in the freezer and use on the spur of the moment. With these on hand, every day can be “pi day”.

Thanks @pilgrim. I used to use the Pillsbury pie crusts until one summer when I decided it was time to master the pie pastry. My SIL makes fabulous pies so I watched her carefully and she gave me a recipe. BUT it’s not all about the recipe you choose, but in the technique and tools used. (IMO the Pillsbury crusts are pretty good)

I got myself a pastry cloth and rolling pin cover, and I’ve been cranking out pies ever since. It’s important to chill the dough for an hour before using.

I’ve tried just about every fat there is alone or combined and I’ve come to conclude that I like half lard and half Crisco butter flavored shortening. It’s easy to work with and tastes great. Half butter, half lard is good too. Before Crisco changed their recipe to have no trans fat, I would use all butter flavored shortening. It handled so well that I was able to roll it so thin that I got many crusts out of the recipe for 2 ten inch pies. It was super flaky too. I haven’t been able to do that with the new Crisco. I know trans fats are bad, but there are times I miss the old Crisco.

I make pies for Thanksgiving, Christmas and by request. All butter and overnight chilling is the most successful combos for me. Also super cold ice water with a splash of white vinegar or vodka seems to help the flexibility of the dough.

I have probably tried to make it a few times, but its not something I choose to eat a lot, so i focus on other skills, and buy different things depending in what I’m making; empanada wrappers for baking for “Jamaican” patties, the occasional puff pastry treats, or a local crust made with butter for a more traditional “pie”, generally tomato, in August. I can post brands if that would be helpful.

different things depending in what I’m making; empanada wrappers for baking for “Jamaican” patties, the occasional puff pastry treats, or a local crust made with butter for a more traditional “pie”

Good point that there are many kinds of pastry we now play at, and most grocers carry these, including dim sum/won ton wrappers which are very versatile.

I once made the original all-butter crust from Cooks Illustrated. It was delicious, but VERY hard to roll out. I went so far as to call them and ask if it was a misprint but the person who checked assured me it wasn’t, adding, “Chris really likes butter!”. After that I cut back by a few tbsps, with better results, but eventually settled on half butter, half lard or Crisco. I used white flour as called for. But I much prefer the flavor of white whole wheat, and am content to settle for less flakiness in favor of flavor. What I do not understand is that with whole wheat, I need LESS water. All the experts say it requires MORE.

Apart from the liquid issue, I also like to add a tsp of flavored extract - vanilla, almond, or maple - to crust. Or grated gruyere or cheddar in pear or apple pies. I’ll bet it would be good to dissolve ground cinnamon in some of the fat, then cool. Or in alcohol, decreasing liquid by half the volume of the alcohol used if it’s vodka. Liqueur would be worth a try, too, but having no idea of volume adjustment, I’d subtract the same amount from the water.

I like to freeze the fat, then use the large holes of a box grater to grate it. Toss well into the flour, add the water by spoonfuls, using a pastry cutter. My Cuisinart is faster, but the texture of hand-mixed is better.

I hear that vodka works very well @gracieggg; I’ve heard not to use vinegar because it toughens the dough. I made a pie crust a few years back that called for buttermilk and it was super easy to handle and roll out, but once baked, it was very tough. I’ve never used vinegar, but it fun to experiment.

Great ideas @greygarious! I freeze my fat too after cutting it up in tablespoon size chunks, for about an hour. Then it goes into the FP with the dry ingredients. I use the pulse setting.

Just wondering if anyone here has successfully made pie crust with coconut oil? I’ve made two different versions but I didn’t like the results. The second one was better but not by much. The first one was made with liquified oil (I melted it) and the second was made with solid form, which I cut in by hand. Each was tough. Although we’re omnivores I do sometimes cook vegan for friends. Nice to have a recipe in your back pocket.

My companion in life is the baker in this house, so it’s rare that I make pastry. And then only a shortcrust. Good quality ready made all-butter puff pastry, in block or ready rolled form, is easily available in the supermarket so there’s little point in trying to make it. And it would be madness to try and make my own filo!!

Shortcrust for savoury pies and pasties is a standard 2:1 ratio. I usually use just butter but, if there’s any in the house that we’ve bought for other reasons, I’ll incorporate lard up to a 50/50 ratio with the butter. From time to time (usually at Christmas), I’ll make a sweet shortcrust. My usual quantity makes 24 mince pies - 500g plain flour, 175 caster sugar, 375 butter, grated rind and juice of a large orange (usually needs a splash or two more liquid - I use juice from the breakfast carton.

I always add a tablespoon of vinegar to my pie crust. I’ve never noticed that it makes the crust tough, but it does make the crust slightly sweet when you bake it. Om flexible as to fat, usually Crisco but I’ve used them all with good success.

For pie crust I have been using Kenji Lopez-Alt’s method since it was first published by Cook’s Illustrated. The recipe as originally published by CI calls for half water, half vodka, but what really makes the crust great is the way the fat is incorporated into the flour. Instead of cutting it in and leaving pea-sized bits as most recipes dictate, this method has you combine the fat with 2/3 of the flour in a food processor and process it until a paste forms - no visible pieces of fat or loose flour. This crucial step basically makes it impossible for the gluten in the majority of the flour to be activated when liquid is added (the fat coating prevents water from getting to the flour to form gluten).

The remaining flour is then pulsed in and water (or water plus vodka) added to finish. The final 1/3 of the flour plus the water does create some gluten (for good flexibility and extensibility), but since the majority of the flour is “protected,” this crust is never tough - it turns out beautifully flaky every time. Much more reliable than any method that requires cutting fat into flour.

I have used this method successfully with many types of fat - all butter is my standard for fruit pies, or I like half butter, half lard or bacon grease for meat pies. I have also added cheese, which works very well.

I have also added cheese, which works very well.

My MiL may well be the UK’s worst cook. And would probably score highly in any international “worst cook” competition. The only thing of hers that I will willingly eat is her cheese and onion pie. The dish is a British classic (although one I’ve never made) but, untraditionally, she also includes cheese in the pastry as well as it being a filling.

For pie crust I have been using Kenji Lopez-Alt’s method since it was first published by Cook’s Illustrated.

For pie (or tart as we call it here) crusts, I always make them for my desserts. I don’t usually have the same incentive to make crusts for savoury dishes as they are mainly puff pastry that would need hours to prepare.

There are 3 shortcrust that I used and like a lot (from Jacque Génin, Pierre Hermé and Philippe Conticini), they all use unsweetened butter, and lots of them. It’s not easy to roll, out from the fridge, one needs to wait some 3-5 minutes. Usually is a mix of flour with almond powder. Sometimes with vanilla grains or lime zest, very little of salt - fleur de sel is also added to contrast with the sweet flavour, icing sugar is also used.

You can have an idea of crust with this recipe from Jacques Génin. 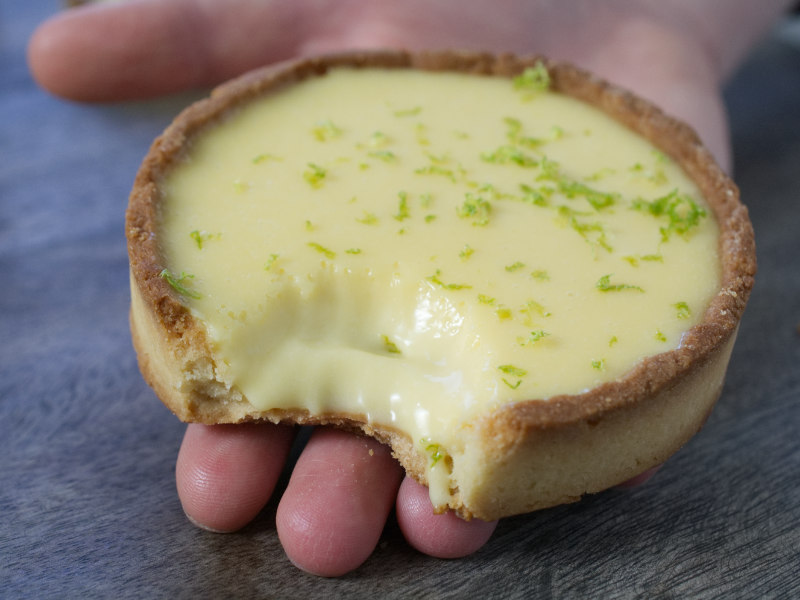 This lime basil pie has a lovely creamy texture and beautifully balances the flavours of the lime and basil.

My MiL may well be the UK’s worst cook. And would probably score highly in any international “worst cook” competition. The only thing of hers that I will willingly eat is her cheese and onion pie.

Baking and cooking are 2 disciplines. Baking is science, you can’t play with the ingredients as you wish and you need to weigh more or less everything, but cooking you can be more intuitive and spontaneous. I see many good cooks are very bad bakers, savoury pies with soft leaky crusts.

I have to say, I’m not naturally born to be a baker, I dislike making dough, I hate how sticky flour sticks on hands. I don’t think I have completely overcome that fear (I still haven’t touch pizza dough yet), but home made crusts are so much better the store bought one, and I love tarts!

For pie (or tart as we call it here) crusts

Are they always a tart, naf?

Exactly, the same as I understood. It seems (not 100% sure) US refers tart as pie as well.

Over here, if it’s a single crust with say, a custard type filling like chocolate, coconut or banana layered with custard and topped with whipped cream, we call them cream pies. For a pie with a streusel topping, it’s still called pie. With 2 crusts, it’s always just pie. However, if it’s a cheese pie, or something rolled out thin with toppings they are referred to as quiche or tart respectively; in the case of tart it kind of depends on the shape of the bakeware IMO, with the fruit or veg exposed. Pizza is just pizza, pizza pie, or sometimes people will just call them pies.

Probably more than you wanted to know, but this is how they’re referred to in my corner of the world.

@Harters, I can’t even imagine making filo dough and have never seen it done. It’s so paper thin, it seems an impossibility.