Just had my first full meal there, went for a quick lunch previously. I’d say this is the spiritual successor to the late great Spicy & Tasty. Started w/dumpling in chili oil. The dough was light and not thick and gooey. The oil was fragrant and almost ethereal. I’m not a big oil fan, it hates my stomach but man, i wanted to drink it. Then we had their version of lamb w/cumin. While not breaded like many others, it was spot on. Also had the deep fried eggplant. That was a revelation. The frying was light and crisp. My only quibble is that I wish they had the cold table dishes that Spicy 7 tasty had. Oh well. I wish it wasn’t so damn far out there @ the very edge of Queens. But, if you’re driving back from the beach or heading upstate from the guy;land or Queens…either way it is worth a detour.

Interesting - don’t think I’ve ever come across a breaded version of cumin lamb.

Great. We haven’t been back since before COVID (3 years, I guess) so I’m glad its still good. Since the US Open is coming up, we may well head over there after one of our days watching tennis.

Not quite breaded. But most definitely coated w/some sort of flour. For an extra crunch. The place that made the best version was a place on Main by Cherry St, long gone. I think the NYT raved about it, and rightly so.

Not sure we’re thinking of the same place, but Golden Palace on Cherry St was the place we always had the best cumin lamb. It was off Kissena, not Main, & is still there, although they’ve changed their name a little. https://goldenpalacegourmetny.com

Not same place, but thanks, will give it a try.

szechuan garden at 104th and broadway has some sort flour on theirs, one if our fav dishes 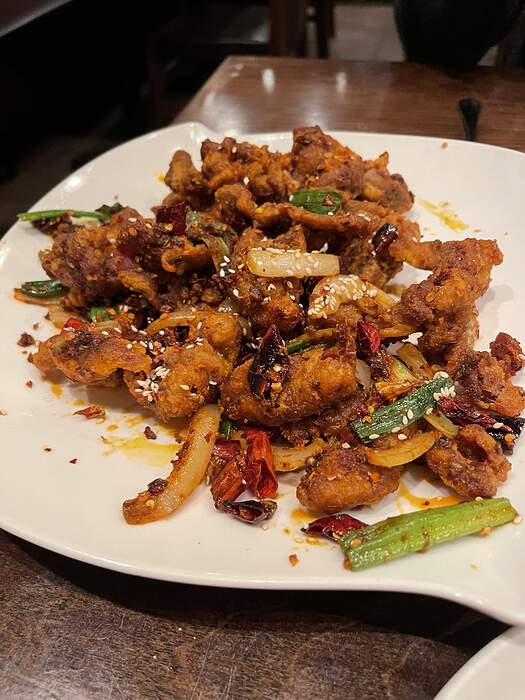 We live near them and order takeout from them. But, they are wildly inconsistent. When they’r eon, they’re pretty good, the best in the UWS yet…and you’re right, floured but sometimes too much…they also do a tofu & celery salad like spicy & tasty did, but not as good.

I like Han’s version. No batter / flour on the lamb and beef, only the cumin fish is breaded.
(All delicious, though.)

well dang, wish we’d met before we moved to ues, we had two meh meals at han and moved on, you could have helped us with that to order!

I know you mentioned that in another thread, we rarely took out but at some point flor supplanted sg as our favorite uws because sg was occasionally inconsistent. we were at sg about a month ago, ordered all our favorite dishes and were vaguely disappointed. I will say the mapo tofu has always been good.

anyhow, this thread has me hankering for some good szechuan, we’re working our way through the menu at china jade chili house and have found a couple of good dishes. We also have Hui in our queue of places to try.

sorry to hijack this thread and yes, too bad LOT is not a little more convenient.

I think this is the case for any place… one either orders something they do well the first one or two times, or it’s a bust.

(My worst meal there was with a large group ordering familiar-to-them things. Had that been my first meal there, I probably wouldn’t have returned.)

we’re working our way through the menu at china jade chili house and have found a couple of good dishes.

Please share! It’s on ordering radius of my friends’ place (and I didn’t enjoy the last two rounds from wa jeal as much as I used to).

last time we had the Szechuan Pork Dumplings with Roasted Chili Soy, eggplant with garlic sauce and I asked for and pointed to the chengdu prawns but I think they brought prawns with asparagus which is adjacent on the menu. anyhow, it was all good, the eggplant was a little oily but full of flavor.

I’d like to have the double cooked pork and the sauteed string beans (hopefully with pork), unfortunately my better half doesn’t love either dish no matter where we eat so if you do give those a try, please give a shout and let me know if they’re worth expending the requisite marital coin

I go to both Legend of Taste and Little Pepper regularly. I let my dining companions choose. there are some dishes on one menu and not the other but where both restaurants do the same dish, Little Pepper’s version is usually better, including the cumin lamb.