Read reviews of Le Rock and booked a table for Saturday night with an eye toward taking my restaurant manager son to dinner at the end of his week. This was last night.

We both agreed that the neighborhood was unfortunate, but the meal and its setting were both what we were looking for, and we enjoyed it immensely. It is large, noisy, and to my sensibilities for this outing, heaps of fun. Yes, expensive too, so buyer beware. But I had read the reviews, and my aim was just to entertain this kid of mine who spends his waking hours catering to others, and I’m pretty certain that he left with a smile on his face (I was a bit inebriated by this time).

Started with cocktails, mine a sirocco, his a beer. (He tasted my drink, remarking “Yup that’s a ‘Mom’ drink.” Whatever that means; I enjoyed it.) We split a delicious St. Joseph, ﻿﻿I did remember to ask my son to snap a picture of this, but no food, sorry: 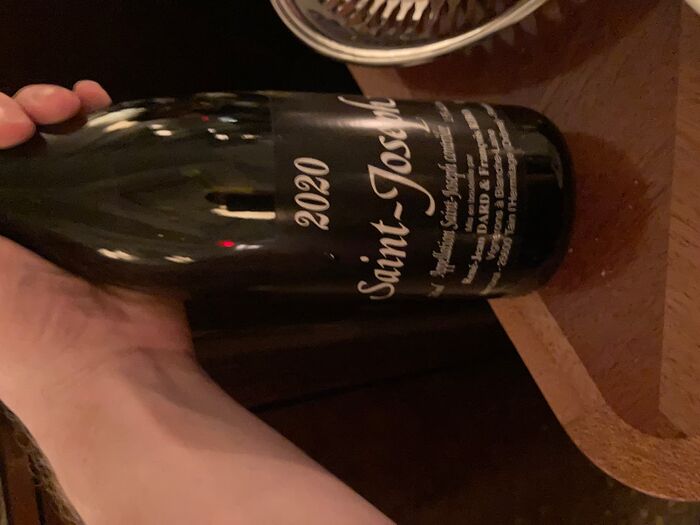 My son had never had duck rillettes, so we rectified this. The amuses are verrry small portions, and this along with the sausage slices kept our stomachs at bay a smidge. We then split the agnolotti (not sure what was in them, mushrooms and something; I could have eaten double the portion, as long as I was sharing) and the leeks. I was not so impressed with this dish. Not sure what all the fuss is about. I am a huge fan of the leeks at Miznon North, and these were not even close to that dish. Just a personal opinion. Also, the restaurant is short in general of green food…when I asked about a vegetable to eat with the mains, the offered a salad or to serve the leeks with the mains. I was eating with my meat and potatoes kid, so not a tragedy, but potentially an issue for some diners.

We had the bison and the duck with the well-deserved, high praised frites. Served with mayo, I asked if they had a bearnaise… (My son tsk-tsking me then asking what kind of kitchen had a bearnais sauce lying around when it wasn’t on the menu…A French one with incredible frites, I responded.) And indeed they did, and we appreciated it. The bison and duck were also both very delicious. The one au poivre, the other with “spices” and served with some delicious braised endive that helped a bit in the veggie dept. We ended with the profiteroles…again, like the version of the Paris brest served at Frenchette, a creative and very delicious turn on a classic.

I’d call the service special. They all seemed to want us to enjoy our evening out. The sommelier picked a very nice wine for us based on “what he would want to be drinking with our meal.” I liked that approach, and it was a really nice bottle. And then they left us alone to enjoy it.

I always think it a bit odd that I take my son, who spends his life in a restaurant, out to a restaurant on his night off to kick back, but he really does enjoy it. And this buzzy, humming, delicious spot was just the ticket last night. Wish it was in a different neighborhood, but you can’t have everything.