Once it gets below freezing, here in VA, very few mushrooms can be grown or foraged. Shiitake calls it quits for the season, but the Late Fall Oyster can freeze solid, thaw, and start growing again!

In March of 2018, I had some huge Tulip Trees (Liriodendron) cut down for a roadway. The branches of it and other trees were chipped up into huge piles by the tree company. With the help of a friend and his backhoe, we buried some of the big Tulip Tree logs in the chip pile. I inoculated the logs with Blue Dolphin, a late fall oyster mushroom. Unlike the drill-n-fill method, I packed spawn against the logs’ cut ends and buried the spawn with chips to protect it and hold it in place. Around Thanksgiving, these popped up: 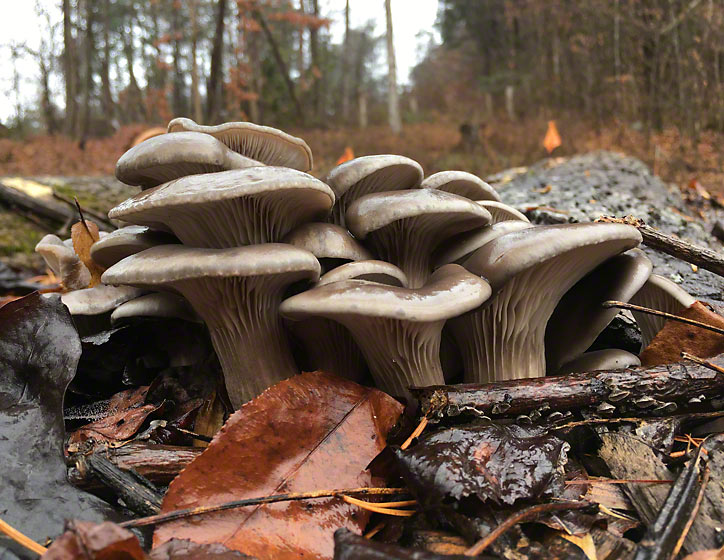 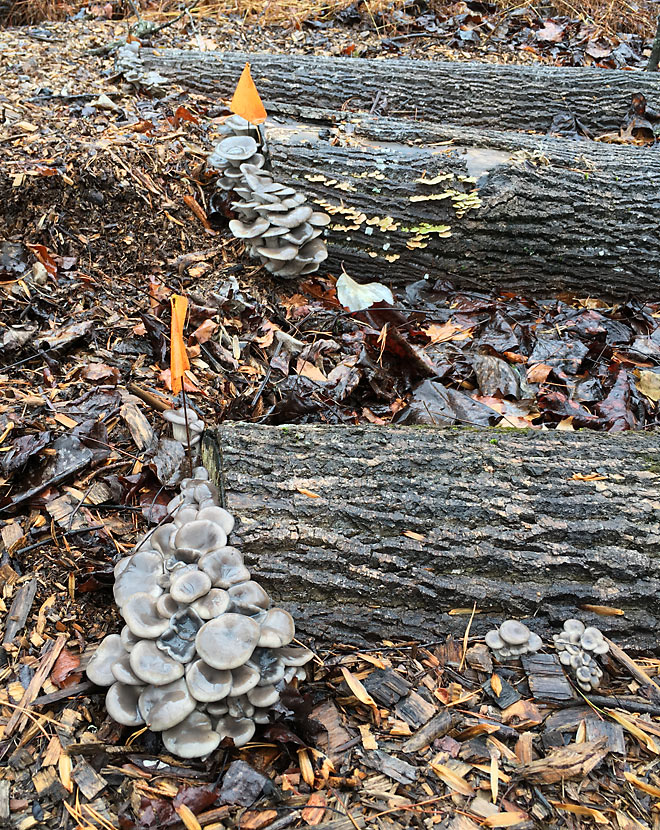 One picking filled the dehydrator! 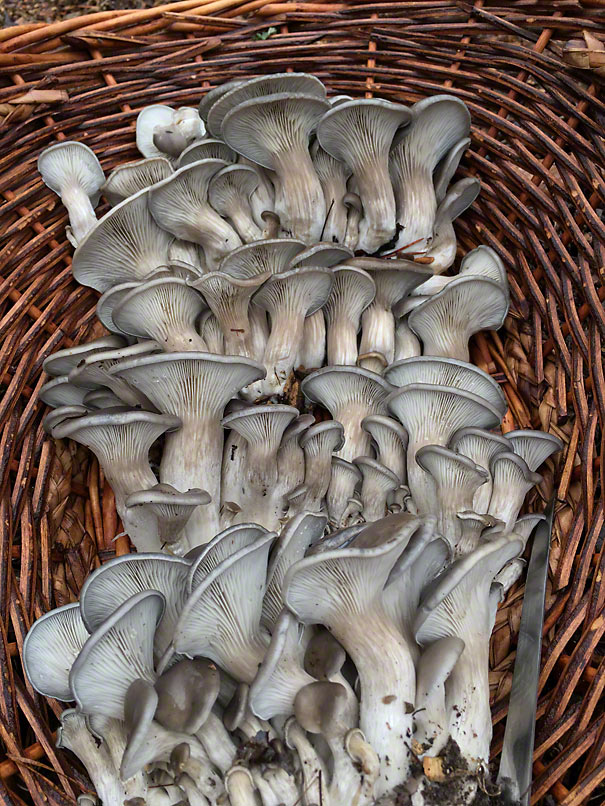 Late fall Oyster Mushrooms are more firm and flavorful than the typical white one. The clusters are very densely-packed with individual mushrooms. Plus, it’s so cold, insects are not an issue. I expect a few years production from the large logs before the fungus digests the wood into humus.

Another Mushroom which appears in the very cold is Flammulina velutipes, the Fuzzy-foot or Enokitake (Slimy Mushroom). Unlike the white, thin ones you see in stores, wild Enokitake have an orange-brown cap and a fuzzy stem which is dark purplish-black. DO NOT GATHER THIS MUSHROOM UNLESS YOU ARE 100% CERTAIN OF ITS IDENTITY!!! There are deadly little brown mushrooms, so don’t take chances. 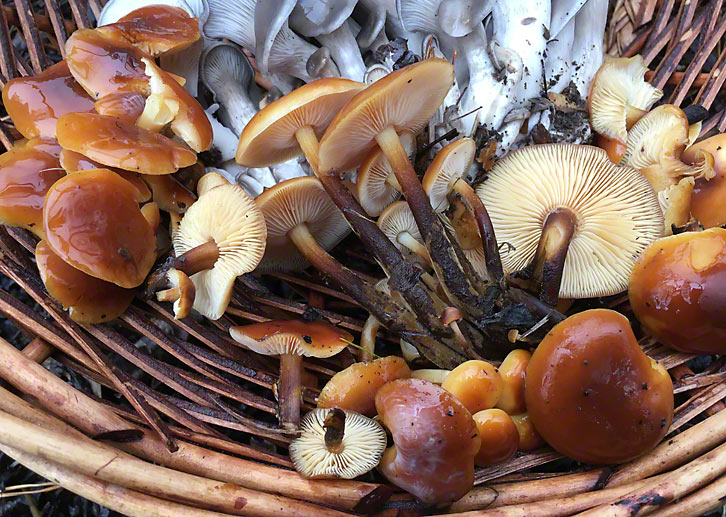 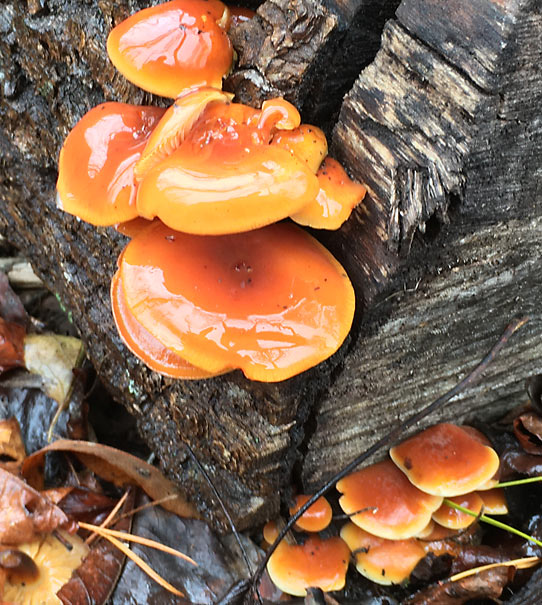 I’ve gathered these for many years and appreciate their “beefy” flavor when sautéed in butter. They are very slimy when raw and smell a bit like apricots!

The ones in stores look like a bunch of white nails. This is due to Carbon Dioxide and lack of light. Cardboard or plastic tubes are put over (typically) mason jars of inoculated media. As the mushrooms grow, they elongate from the CO2 and dark, trying to reach the outside air.

Soon, it will be too cold for even these hardy mushrooms. It’s fun to harvest anything in December around here. We had 18 degrees F (-8C) recently, and these popped up after that!

Some lucky one in Poland: 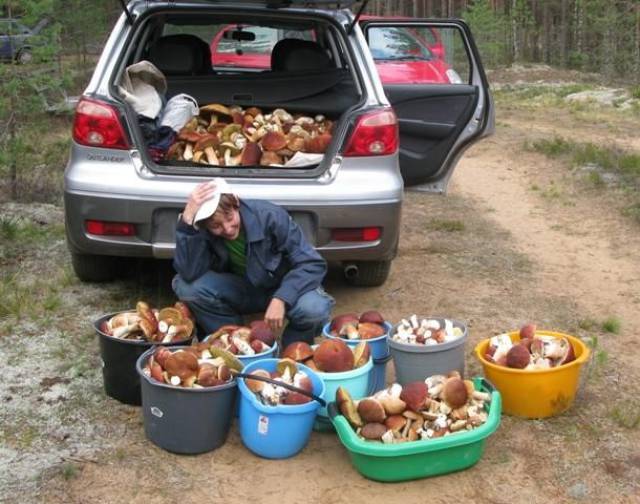 That is pretty amazing!

Thanks! The Polish pic is remarkable! The Boletus mushrooms (Cep, Porcini, Steinpilz, King Boltete) are mycorrhizal, living around/within the roots of trees. So, they usually reappear every year. I used to gather them in Massachusetts with my Lithuanian Grandma. One can’t easily grow them and I’ve not heard of any one who grows them from inoculated trees. Unlike Truffles, the price isn’t high enough to foster innovation.

You make decay look good! I have what I believe to be mushrooms growing on the roots of a tree we cut down. Pretty interesting watching them over the years. Here’s a picture. I can’t imagine trying to control the process. 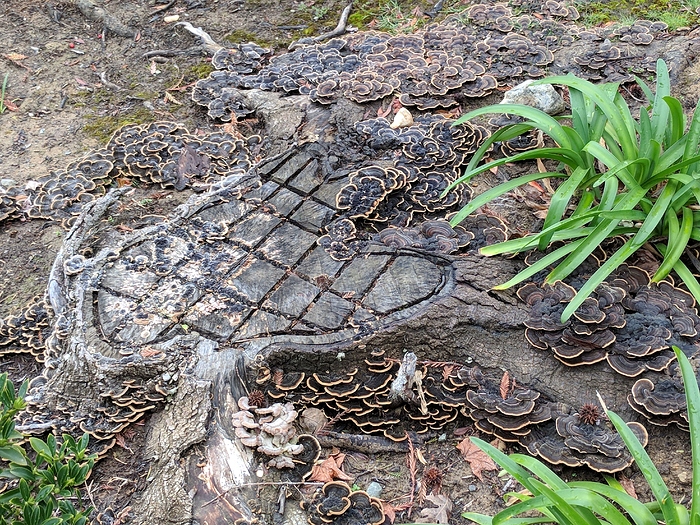 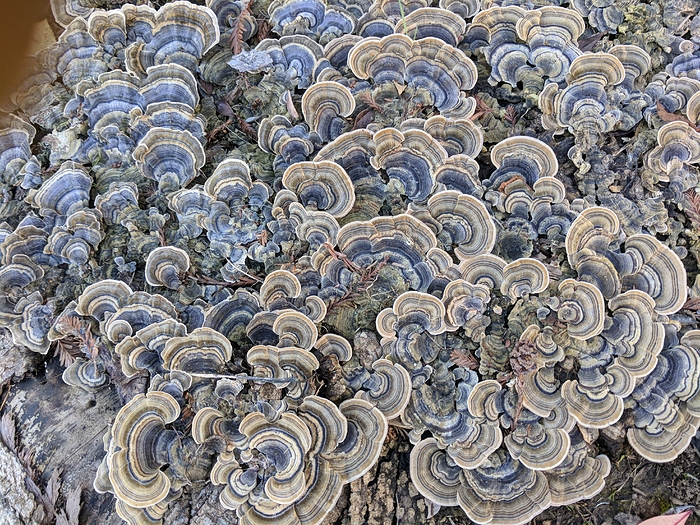 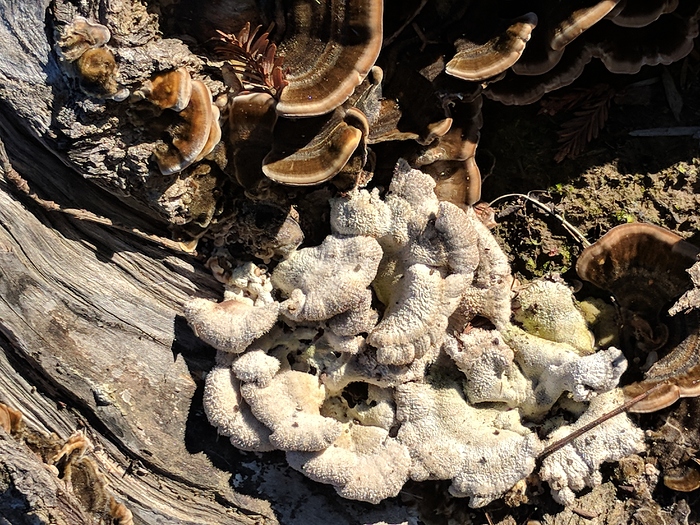 The striped mushrooms appear to be Turkey Tails, Trametes versicolor. It has purported medicinal value, though I’ve not seen conclusive research.

Controlling the process basically means one has spawn (mushroom mycelium grown on substrate) on-hand when the logs or trees are cut. Then, you fill the wood with the desired mushroom before other fungi take hold. I use sawdust spawn and a tool to inject it into predrilled holes. Then, the holes are sealed with melted cheese way to protect the spawn from drying out. After that, it’s mostly keeping the logs damp, soaking them if there is no rain.