Thanks to a Facebook post by Caleb Zigas relaying his job listing on Craigslist, we now know that La Cocina is developing a “Municipal Market” food hall at 101 Hyde St. Presumably it will be stocked with vendors from La Cocina’s incubator program, which has brought us lots of great Asian and Latin cheap eats over the last few years.

La Cocina’s Municipal Marketplace is a new project–a joint venture with theTenderloin Housing Clinic. A 7,000 square foot, food hall with a focus on equitable economic opportunity for entrepreneurs, affordable and healthy eating options for residents and workers of the Tenderloin and a vibrant community third-space that welcomes everyone to the table at 101 Hyde Street. This temporary project (5–10 years) will prove long-term viability of a market hall retail model for any affordable housing that might be built on the site, will engage the community, make the specific corner more vibrant and stand, nationally, as an example of conscientious community building and economic development within vulnerable communities. 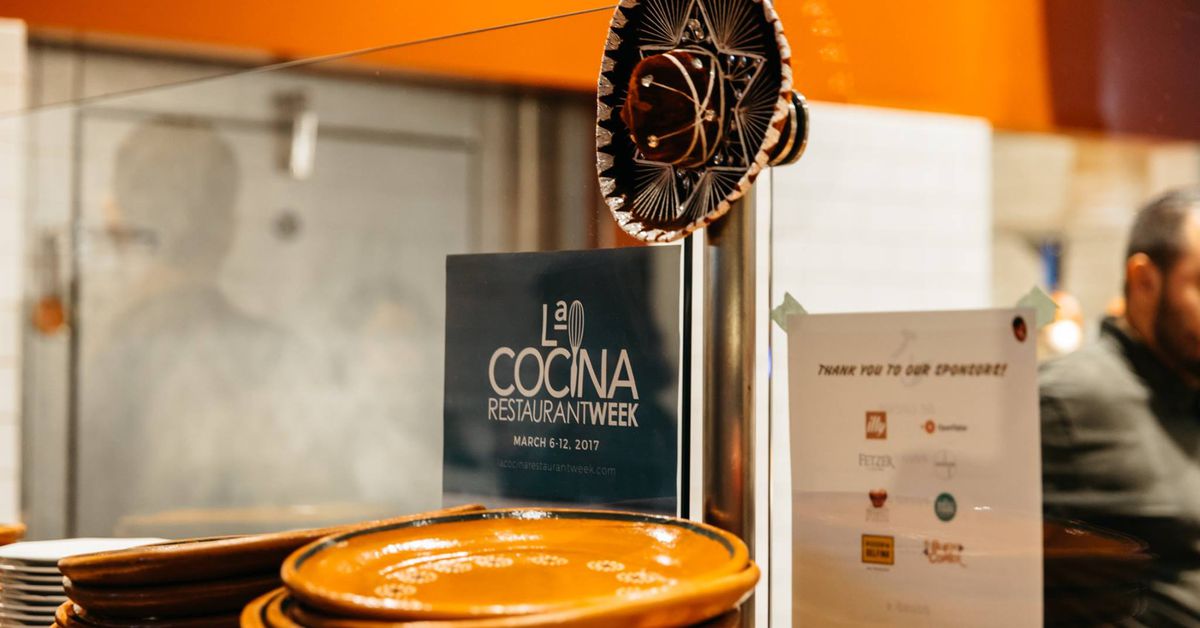 I am looking forward to it. Hopefully they can do a great job creating a space that fits into the neighborhood.

La Cocina — the food entrepreneurship program that helped launch such businesses as Azalina’s, Don Bugito, and Onigilly — is behind the effort, which Planning has already approved. But the incubator has hit a roadblock, and it’s a big one. With the city undergoing a massive construction boom, the price to renovate the building and construct kitchens and dining areas has skyrocketed. In May 2016, the project was estimated to cost $2 million, with both La Cocina and the city splitting the bill. But by December 2017, just a year-and-a-half later, that number doubled to $4 million. La Cocina believes it can raise $1 million more, but that still leaves the project is $1 million short of the funds needed to launch. 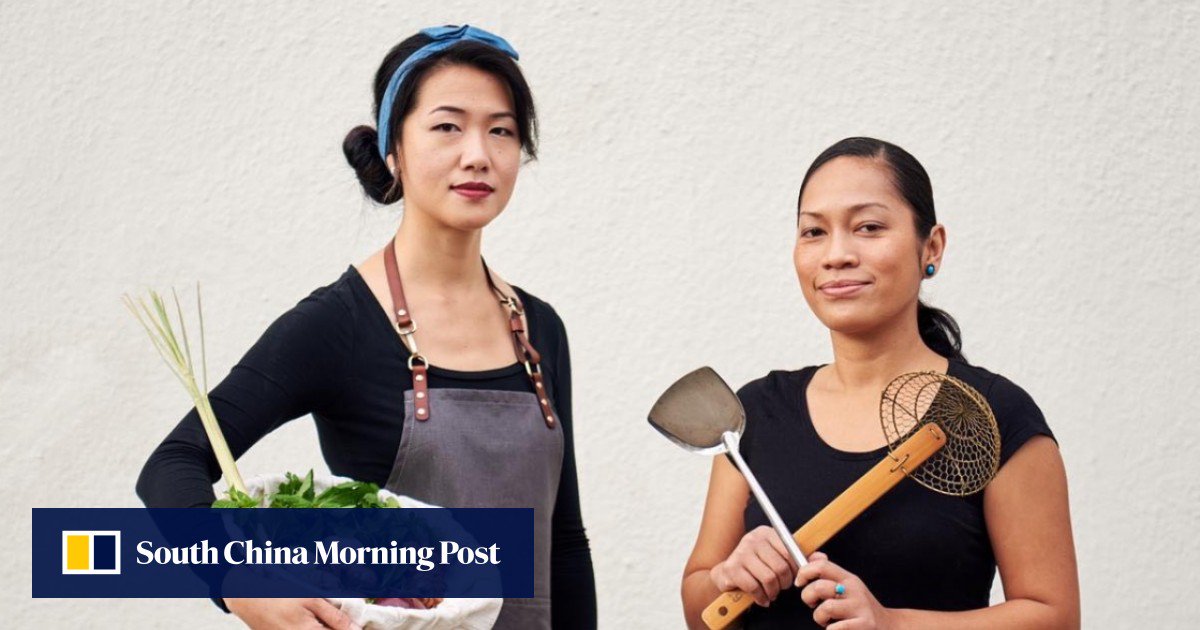 The tech boom in Silicon Valley has propelled an influx of immigrants, particularly Asians, creating a unique opportunity for food entrepreneurs.

Has anyone tried Tracy Goh’s laksa? How’s is it? Any idea when Damansara may open?

Checked out the La Cocina Market Hall for dinner before a movie. Nice clean, bright expansive space, plenty of seating with a wall full of cookbooks and art books to peruse while you eat. It closes at 8:00 but I think it is primarily a lunch spot as it was pretty empty and only 3 of the 6 food stalls were open when we went at 6:00. There’s a bar, La Paloma, serving serious cocktails and a decent beer selection. All the draft beers were from Bare Bottle, a local brewery from Bernal Heights. Their fruited sour with tangerine, passion fruit and vanilla was crisp and refreshing and quite sour. I don’t know if they rotate the taps among breweries. Bartender made my daughter a complex vegetal citrus mocktail that she loved. The pupusas from Estellita’s were excellent, as I remember from when they had a truck at the Alemany Farmer’s Market. My Djollof rice from Teranga, a Senegalese stand was also really good. Interesting spicing on the chicken drumsticks. I asked the chef about the delicious tomato jam/sauce that came with the rice and she recited a long list of spices that went into making it. I want too try more of their menu and juices next time. 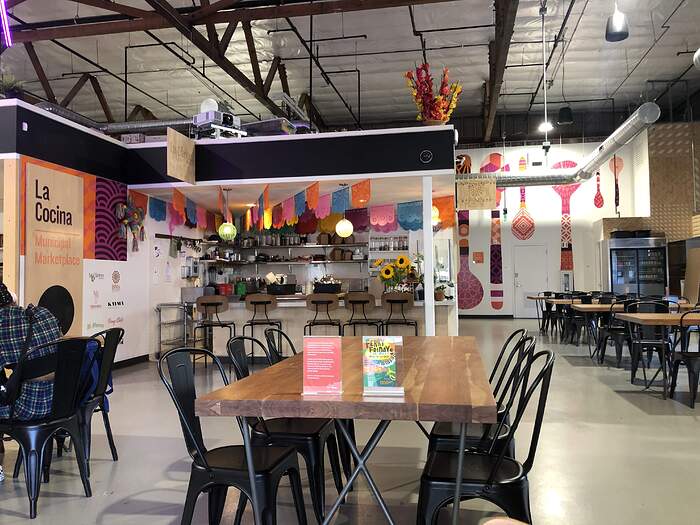 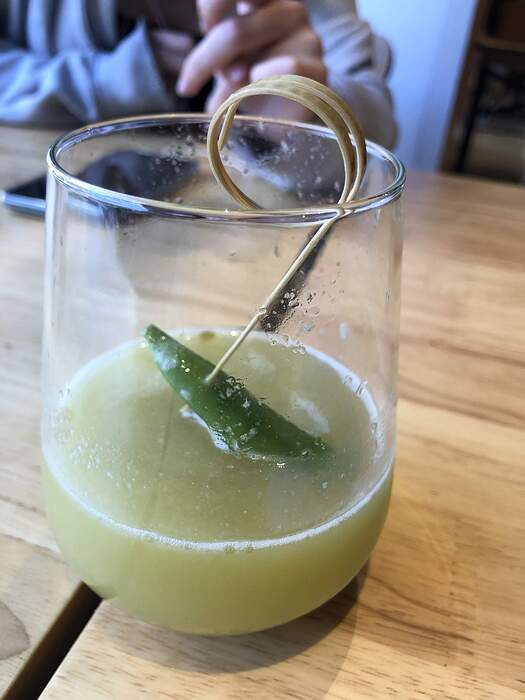 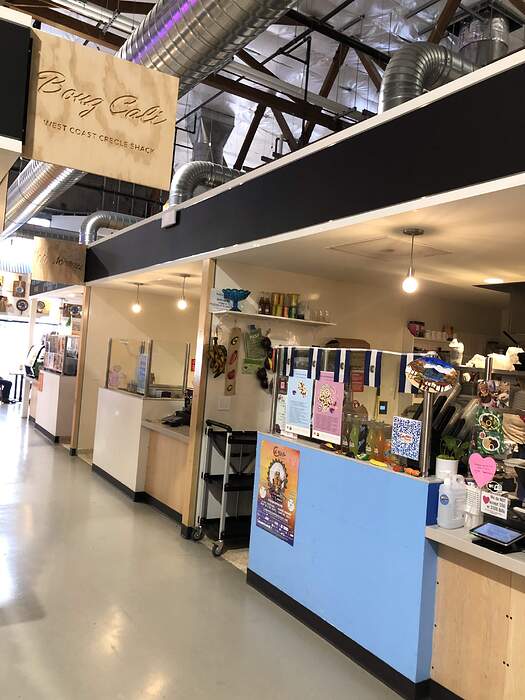 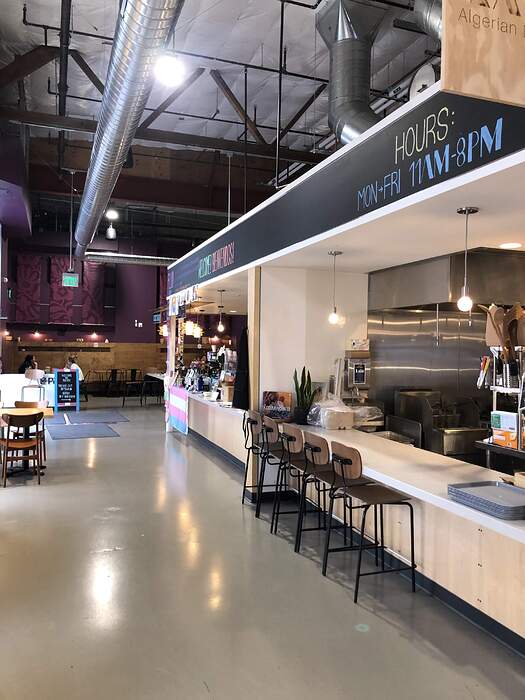 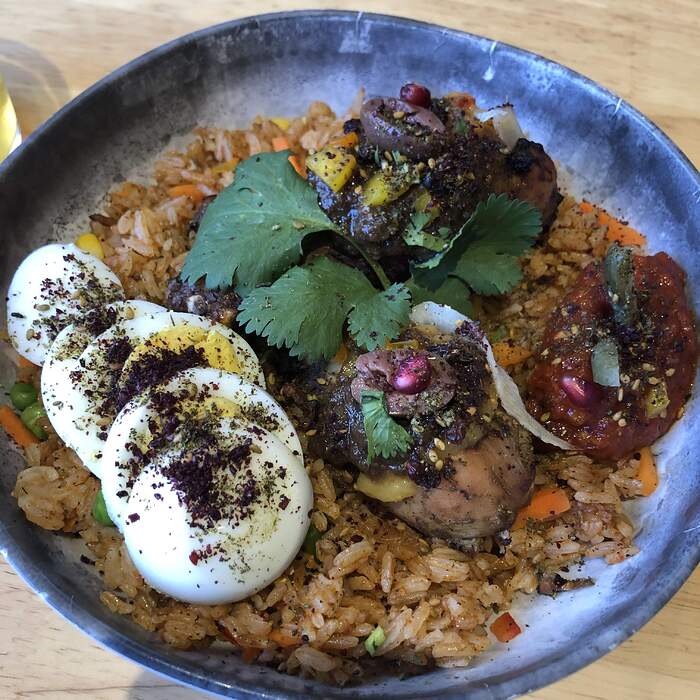 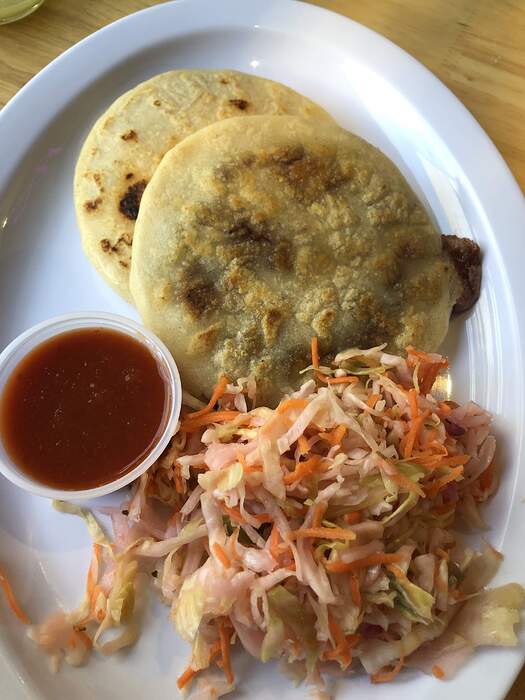 My Djollof rice from Teranga, a Senegalese stand was also really good. Interesting spicing on the chicken drumsticks.

That rice looks really good. What kind of spicing on the chicken?

“Marinated in tamarind, dijon and Baobab.”
There’s also an Algerian place Kayma that looked like it had some interesting dishes. Binis Kitchen has a stand too.

I spent a whole weekend there in March, attending a Queer Coffee Conference sponsored by the folks at Fluid. They’d arranged for La Paloma to provide cocktails on Friday night and for Estellita’s and Teranga to provide lunches and dinners. I enjoyed the pupusas, and Senegalese is a rare treat for Bay Area diners. The La Cocina pop-up market that was at Ghirardelli Square over the holidays was selling Teranga’s baobab snacks, and somehow I didn’t connect those with the stall until I saw bags for sale.

I spent a whole weekend there in March

Oh cool, I know they intended it to be not just a food hall but a community space as well. What were the lunch crowds like when you were there? I hope they are sustainable, there’s some good food to be had, 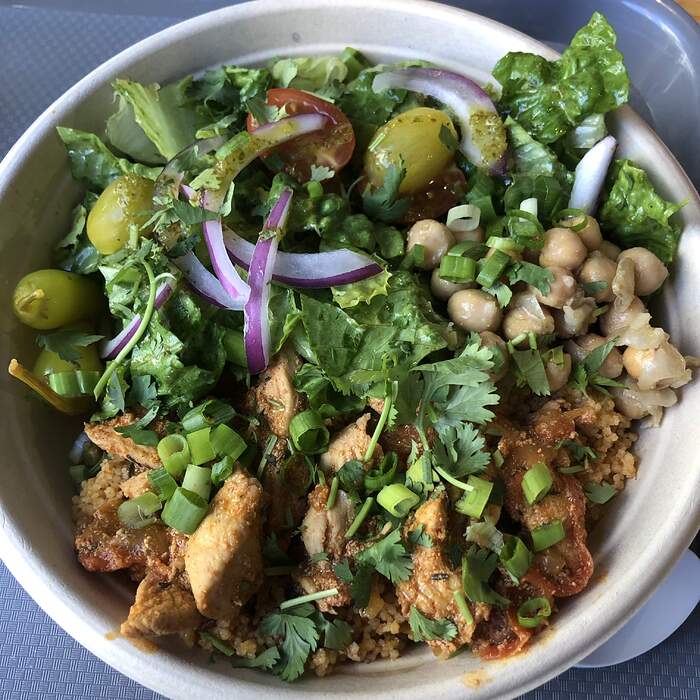 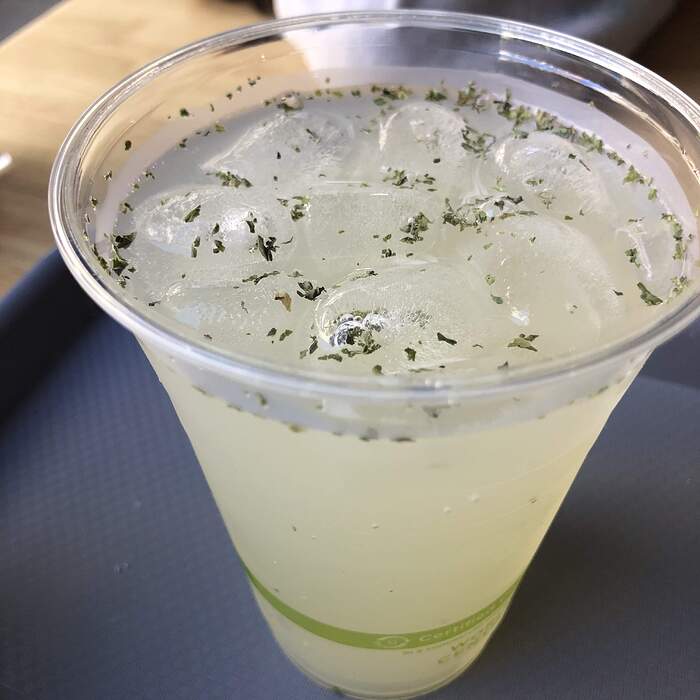 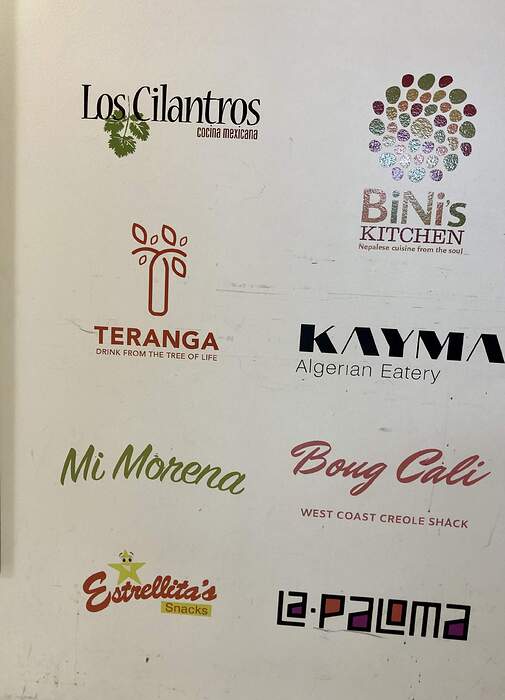 We live close to La Cocina Marketplace and have been a handful of times. We’ve gotten Los Cilantros ceviche tostada (good), Boug Cali’s jerk tacos (eh, what you’d think), Teranga’s drumsticks (good, and, ya a different flavor profile than I’d had), Estellita’s pupusas (not bad, but we prefer Panchita’s in the Mission which we go to regularly), and a couple other things that escape me now. The various drinks from the stalls are usually very nice.

We regularly think about going there for lunch but then look at the menus and there isn’t anything that jumps out that we really want so end up not going. Kind of weird because they mostly make good food but, ya, nothing that makes us want to go back a bunch. Seems like the offerings are almost too similar between a few taste profiles.

In terms of business, they’ve had a decent lunch crowd for a while now (but not on the weekends… since they’re not open on the weekend). They had a parklet for a while which no one really used and then was ransacked at night of course, but they tore it down and are just now building a new one (I assume with better security/keep-people-out-at-night measures).

I guess that’s a long way of saying that I’d definitely check it out if you haven’t, and would often enough if I worked close by and was an option for lunch over the other stuff in the area, but living close by wish they had some more options to make us want to go back more regularly cause we love it being there and support it 100%.

Only photo I could quickly find: 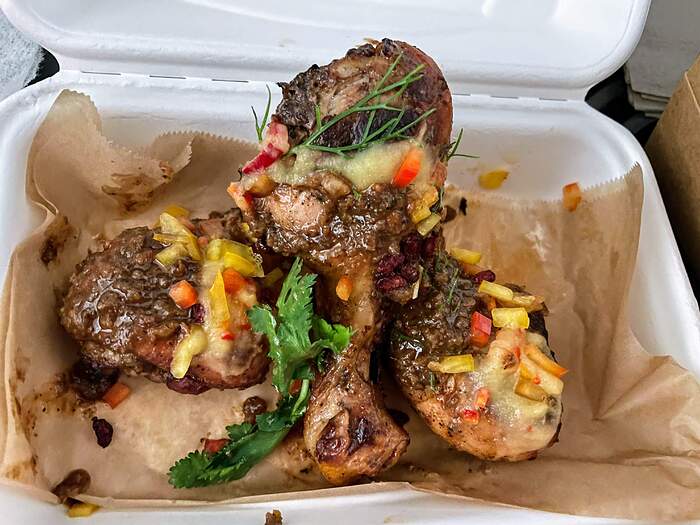 I am looking forward to it.