Three-month-old Birch is currently KL’s hottest brunch spot - last Sunday when we were there, it had 150 reservations for brunch alone! Tables are turned over every 2 hours, we opted for the first slot at 9am, to avoid the late-risers and post-church service crowd.

Birch is owned by the same people behind the ever-busy Huckleberry in nearby Damansara Heights. Whilst Huckleberry was cluttered, with a woodsey decor, Birch’s sun-lit main dining room was bright, with well-spaced out seating, and filled with plants & ferns. 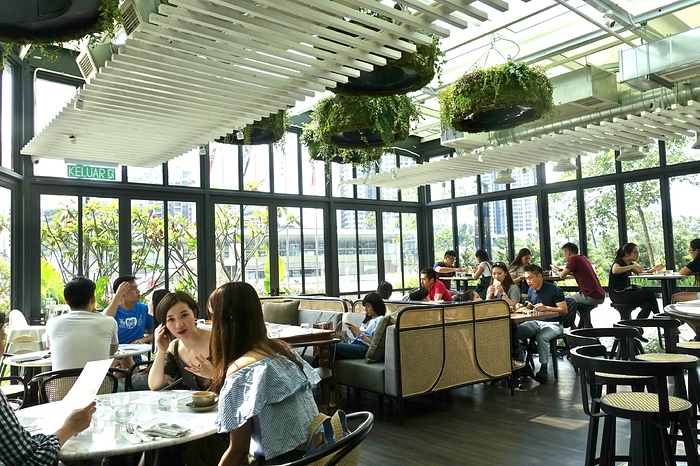 Our brunch options had some hits-and-misses. First, the hits: 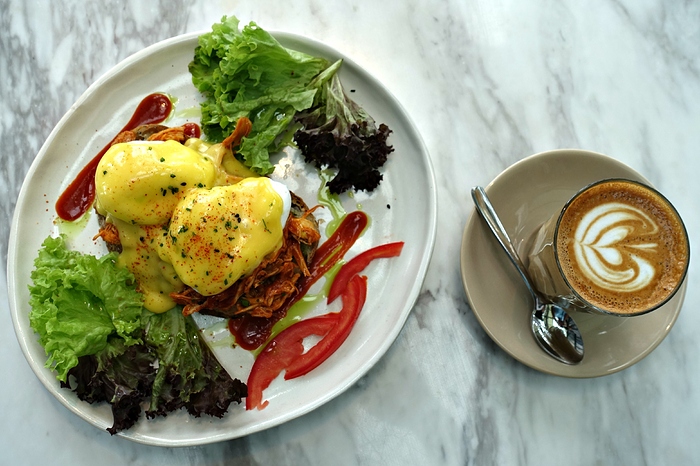 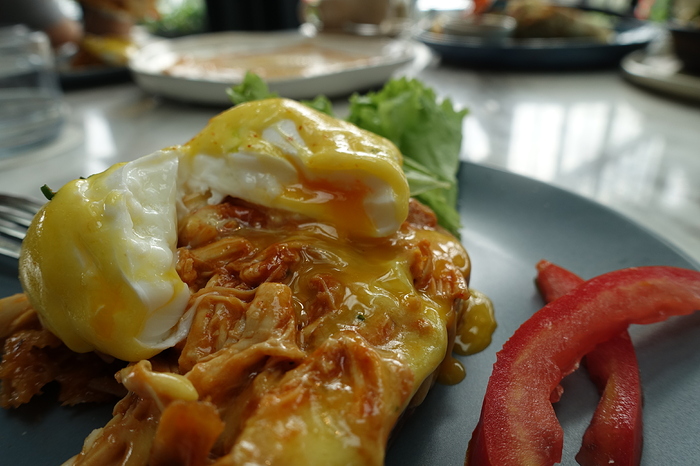 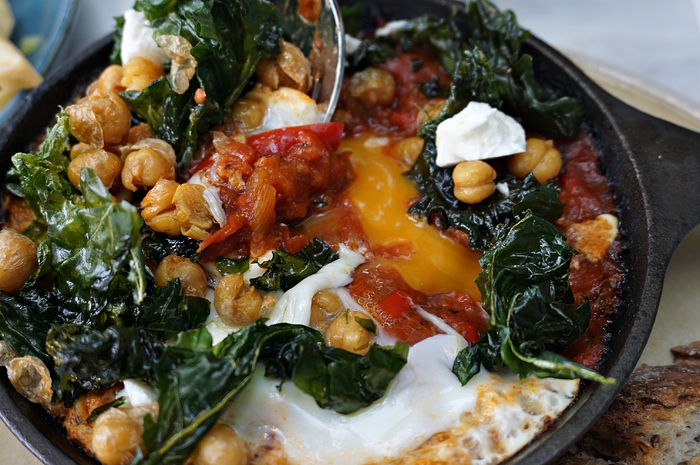 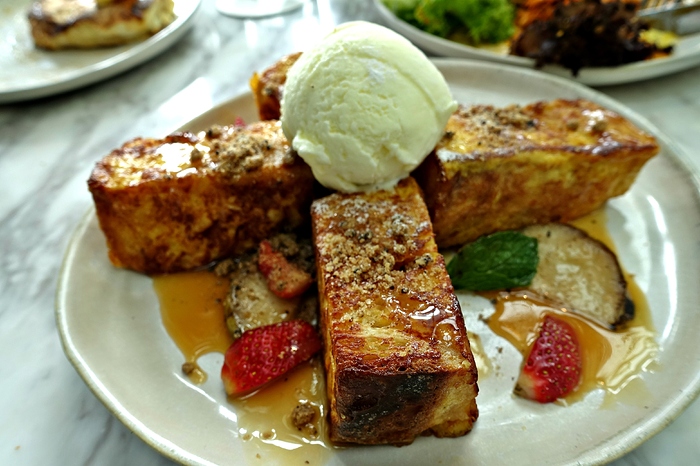 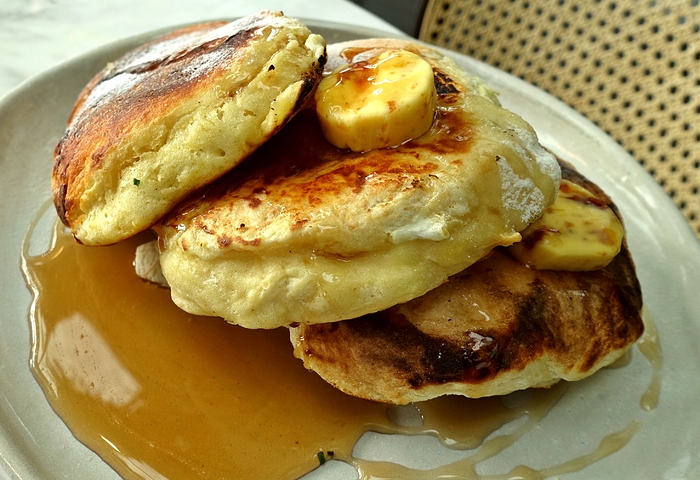 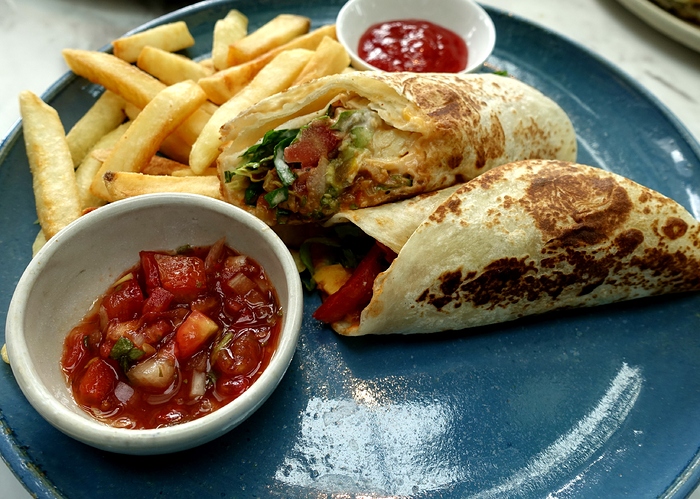 The beverages were pretty average here - the emphasis seemed squarely upon the food items. 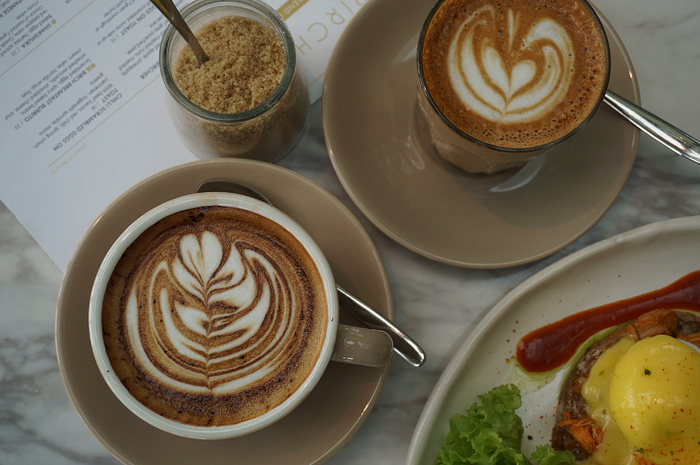 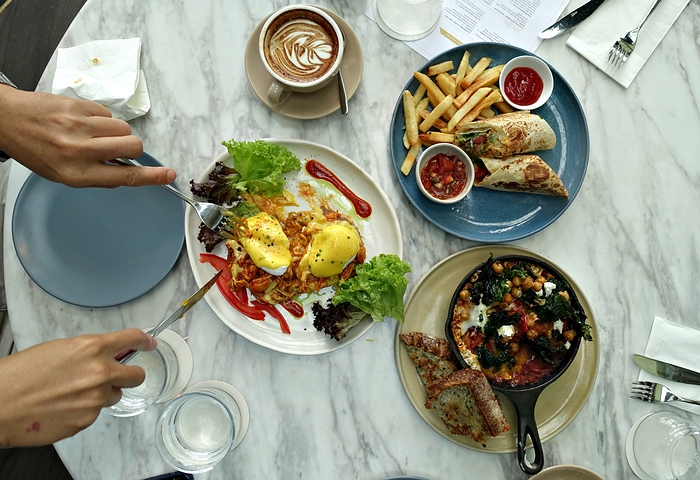 KL-lites are fond of exploring new brunch places, and the flavour of the day changes with amazing speed - from Kenny Hills Bistro to Red Bean Bag and Huckleberry, then onto Yellow Brick Road and its sister-outlet Wicked, and now Birch. 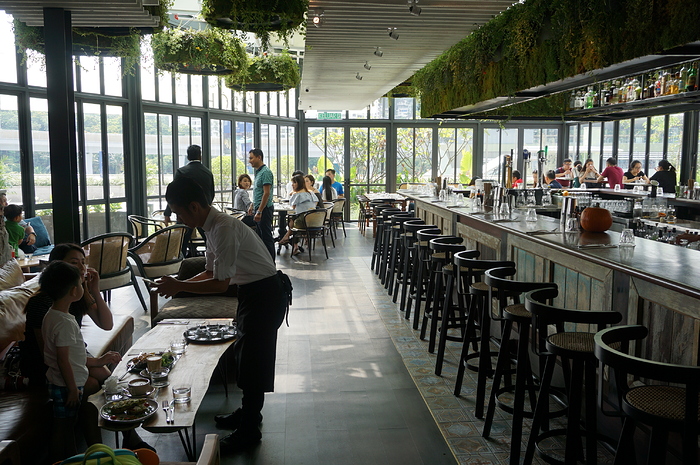 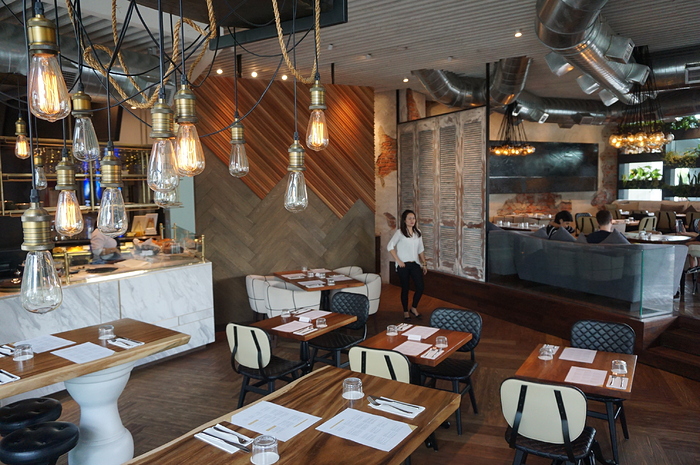 I like the fact that they have so many cuisines, is this the reason why they are “the hottest brunch spot”?

It’s pretty normal in Malaysia for eateries to have fusion Western-Asian options on their menu - I guess the practice stems from history there, where the Chinese and Indians have been in Malaysia for centuries, and their cuisines melded with each other, as well as with native Malay/Indonesian cuisines. But all three major ethnic groups: the Malays & other indigenous people (76% of the population), the Chinese (18%) and Indians (6%) love their cuisines to be spicy and with robust, assertive flavours. So, any “Western” restaurant will usually try and incorporate some of these cuisines into their menu.

This place has Mexican, French, Australian, North African and American, I guess fusion with local style. I understand in Asia, they search for novelty and more receptive to ideas, in MY it is in the culture. Imagine this in France, no serious foodie will take this place seriously if they aren’t specialise in 1 cooking or 2 if they are doing fusion.

Personally, if I were a chef, this place would be a dream, you can play with so many cuisines!

The ethnic-Chinese used to constitute about 45% of Malaysia’s population when it gained independence from Britain in 1957. Many started emigrating due to the Malaysian government’s affirmative action programme for the ethnic Malay-Muslim populace. Education and business opportunities for ethnic Chinese (and ethnic-Indians) are very limited in Malaysia. Rising religiousity among the Malays/Muslims and growing intolerance of non-Muslims also put the Chinese & Indians at odds with Malaysia’s majority race.
Consequently, the ethnic-Chinese population has fallen to 30% - the percentage is perhaps from the 1970s-80s, and which is drastically dropping now due to emigration as they seek to build new lives elsewhere. This, coupled with the very quick rise in the Muslim population as Malaysia absorbs Muslim immigrants from Indonesia, Bangladesh, Pakistan, etc.

The 18% estimate of ethnic Chinese is from the latest official survey in Malaysia.

Ooey Gooey Quesadilla - cheese and tomatoes, wrapped in tortillas. We probably got ourselves to blame here - we should have noticed the emphasis on “ooey gooey” in the item description on the menu. Somehow, we were still expecting a fresh, colourful Mexican dish instead of the limp, overly-messy roll we had.

It’s funny that this is actually the second rolled “quesadilla” with veggies I have seen in KL! The first was at some bar I went to with my cousins last year. Someone ordered a chicken quesadilla and it came out like a rolled wrap, with lettuce, cheese, and salsa. No idea why M’sians seem to think a quesadilla is supposed to be rolled and have fresh veggies in it! .

It’s funny that this is actually the second rolled “quesadilla” with veggies I have seen in KL! The first was at some bar I went to with my cousins last year. Someone ordered a chicken quesadilla and it came out like a rolled wrap, with lettuce, cheese, and salsa. No idea why M’sians seem to think a quesadilla is supposed to be rolled and have fresh veggies in it! .

You noticed it, too? It happens quite often in KL - someone starts serving an item in a certain way, it gets to be so popular, every other place starts copying it and, before you know it, that rendition has become generic. For example, this is what KL folks expect when they order a tiramisu: 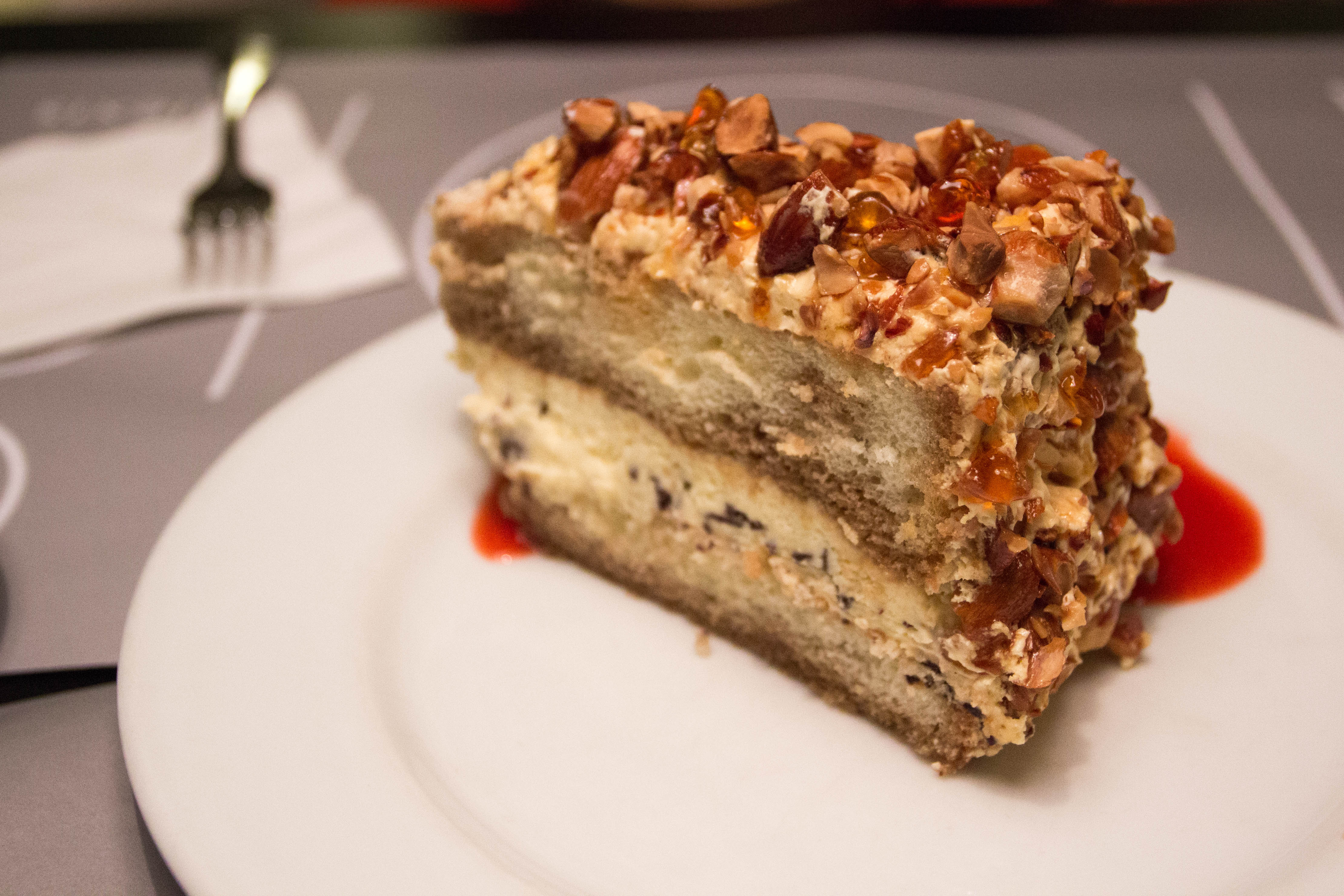 It will be a sponge cake, topped with crushed nuts and caramel shards. I was told that popular cafe, Alexis, started this trend about 15 years ago.

Today, we have a whole generation on Singaporeans who think this is how an apple strudel looks like: 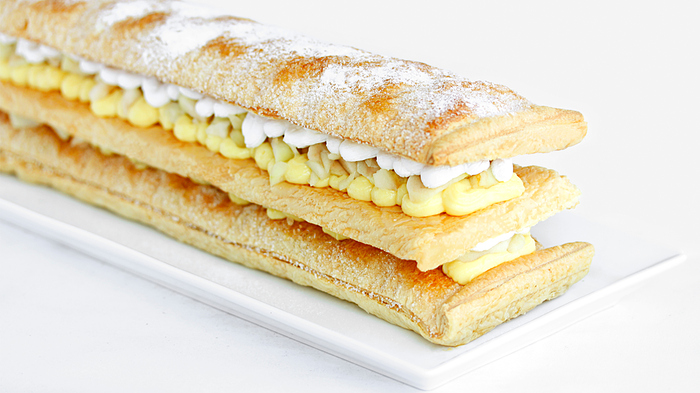 I guess it’s the same with regards to traditional “chow mein” in New York. Although “chow mein” basically means fried noodles in Chinese, the version in many of New York’s Chinese joints do not contain any noodles, although you do get a packet of crisps to sprinkle atop your stir-fry of meats & vegetables.

Chow mein in New York doesn’t have noodles?! I didn’t believe you until I googled it.

It’s always interesting reading your descriptions of the regional differences in dishes around the Malay peninsula and of some of their origins in China. A lot of those were historical things that developed over time and with migration, so it’s fascinating to see these warped modern examples in KL and how globalisation influences cuisines rapidly but seemingly in more of a fad way. I’m not so sure the soggy quesadilla will stand the test of time.

One thing about Chinese cuisine - it’s very adaptable, and takes on a local identity. Many Chinese regard American-Chinese food as a regional cuisine unto its own. I yearned for mu shu pork because it doesn’t exist in Singapore (or anywhere outside the US, for that matter) - so everytime I travel to San Francisco, I’ll pop into R&G Lounge or Great Eastern and order that dish.

I miss British crispy duck - yes, British-Chinese cuisine is also another genre in itself - so when Royal China (a well-known London-based Chinese restaurant) opened a branch in Singapore’s Raffles Hotel a few years back, many of us who hankered for that dish went there just to order the crispy duck - served shredded on pancakes with a dollop of hoi sin sauce on top. British-Chinese crispy duck is a variation of Northern China’s Peking duck as much as mu shu pork is.

Back to the soggy quesadilla - it’s really a nod to KL-lites’ taste: over there, they love drenching their food in copious amounts of gravy. KL is the first place where I see hamburgers served on a plate, drenched in almost a cup of brown gravy, besides mayonnaise and sweet chili sauce. It has to be eaten using cutlery. Never seen that dish yet in other parts of Malaysia. 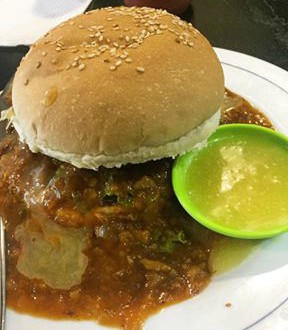 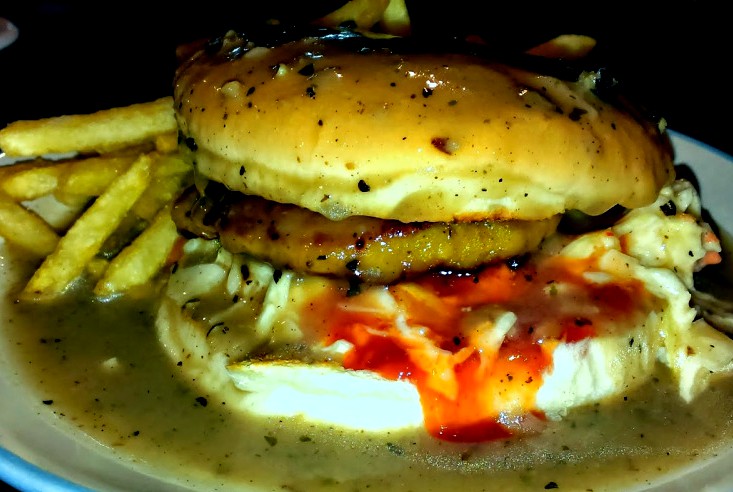 I got these photos off the Web, as I’d not been able to bring myself to order one of these, despite having lived in KL from 2011 to 2016. As the saying goes, one man’s meat is another’s poison.

it’s really a nod to KL-lites’ taste: over there, they love drenching their food in copious amounts of gravy.

Even the sauce are good, the soggy bread in “gravy” burger are terrible to eat!